On December 7, 1941, The U.S.S. West Virginia was struck by two bombs and seven torpedoes during the Japanese attack on Pearl Harbor. The attack sunk but did not destroy the battleship, and she went back into service after repairs until her decommissioning in 1947. On March 17, 1961 the mast of the U.S.S. West Virginia BB-48 arrived at West Virginia University to commemorate the perseverance of the battleship. This mast is one of many artifacts from the ship donated to the state of West Virginia. The mast was later installed in Oglebay Plaza in front of Oglebay Hall on May 11, 1963, as a Pearl Harbor memorial. In 2007, a commemorative bronze plaque was dedicated with the names of the 106 sailors who died during the attack on the USS West Virginia. 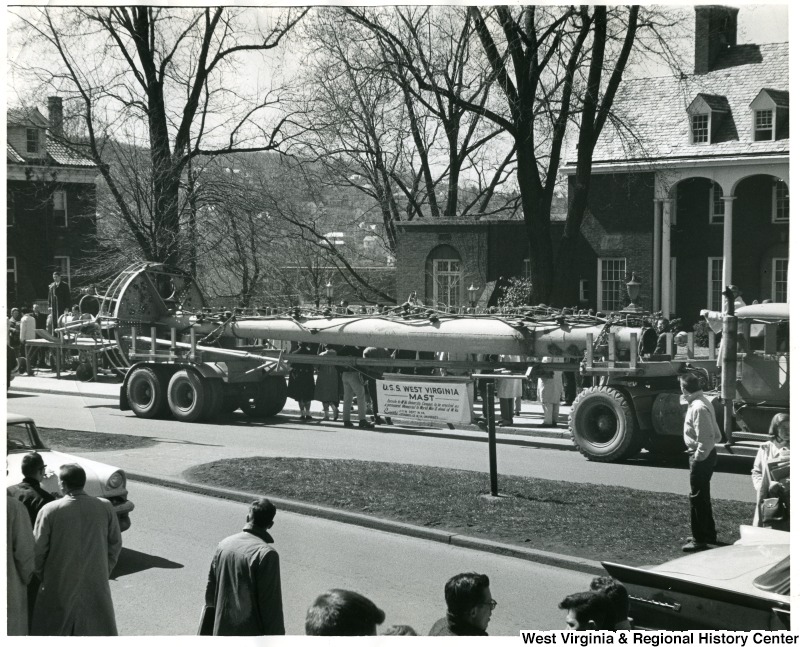 The mast memorial at Oglebay Plaza 1963. 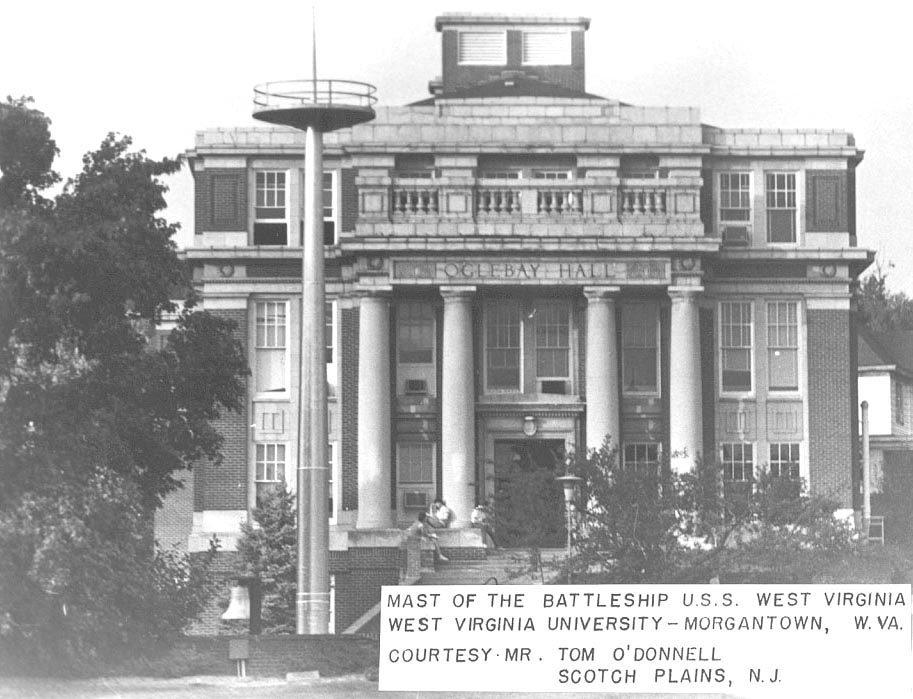 Students and Faculty gather around the mast during arrival. 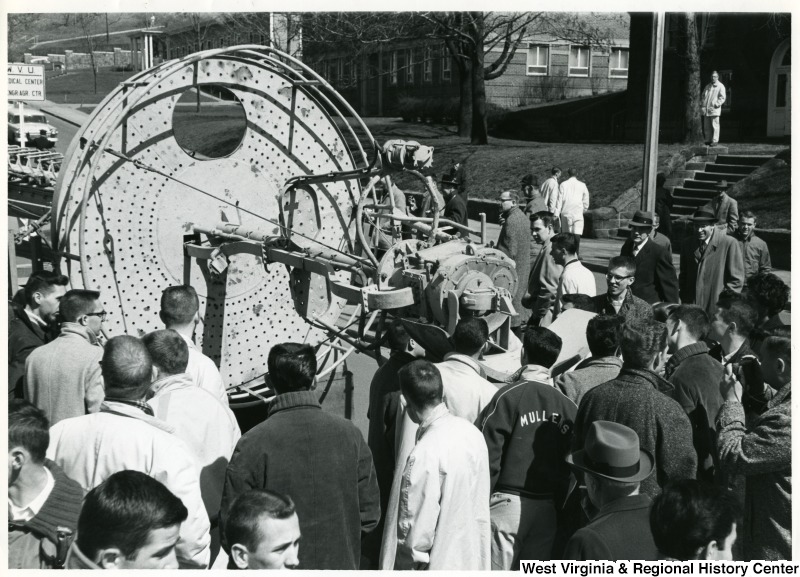 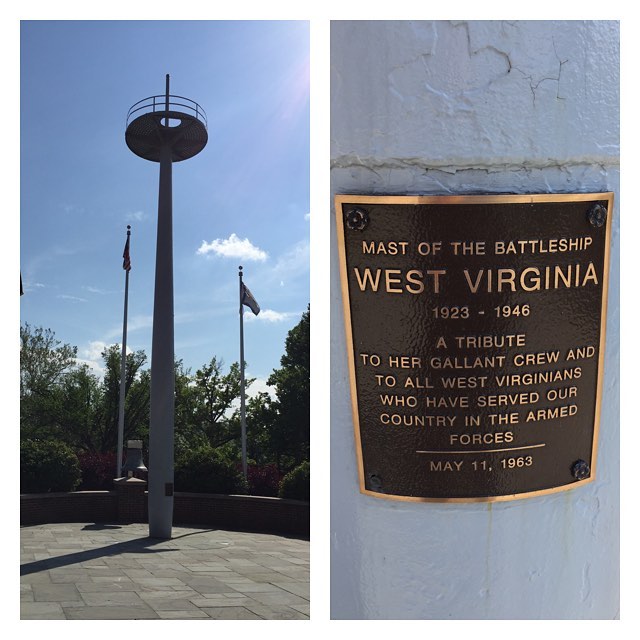 The bell of the armored cruiser U.S.S West Virginia later installed next to the mast. 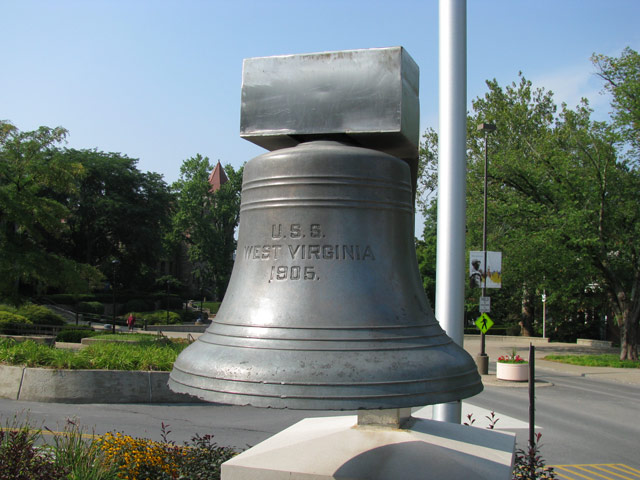 Winter time at the Mast. 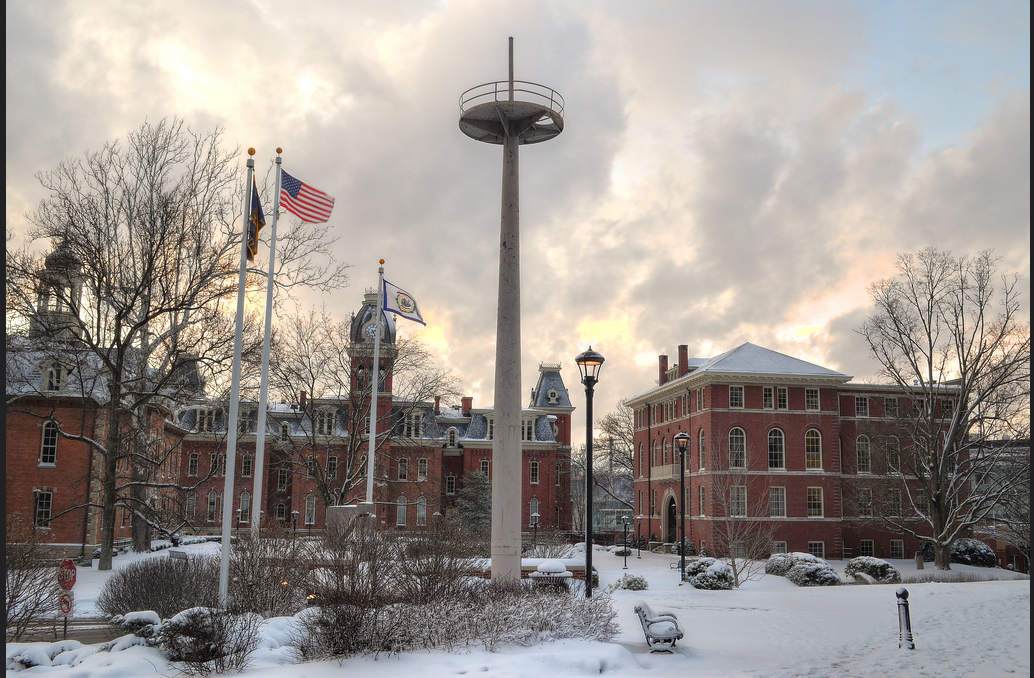 The U.S.S. West Virginia received its name through the sponsorship of Miss Alice Wright Mann of Mercer County, the daughter of Isaac T. Mann, a prominent West Virginian coalmine operator. Under the command of Capt. Thomas J. Senn, the U.S.S. West Virginia BB-48 was commissioned on December 1,1923. This was the last American Battleship to be launched prior to the restrictions imposed by the 1922 Washington Conference on Limitation of Naval Armament, and was the latest and most advanced "super dreadnoughts" of it's time. After training, repairs, and change in captains, the U.S.S. West Virginia became the flagship for the Commander, Battleship Divisions, Battle Fleet, on October 30, 1924. In the late 1920s, the battleship was armed with more artillery to keep up with technological advancements.

"In the closing years of the decade of the 1930s it was becoming evident to many that it was only a matter of time before the United States became involved in yet another war on a grand scale. The United States Fleet thus came to be considered a grand deterrent to the country's most probable enemy Japan. This reasoning produced the hurried dispatch of the Fleet to Pacific waters in the spring of 1939 and the retention of the Fleet in Hawaiian waters in 1940, following the conclusion of Fleet Problem XXI in April."1

Commonly referred to as "WeeVee," the U.S.S. West Virginia was one of the first ships engaged at Pearl Harbor.2 Slightly before 8:00am, the Japanese executed a well planned air raid on the fleet stationed on Oahu and managed to destroy nearly 20 American naval vessels, including eight enormous battleships, and more than 300 airplanes. The first bomb that struck the U.S.S. West Virginia collapsed the superstructure deck, and caused the galley to catch fire which resulted in the detonation of the projectiles that were stowed in the casemates. The second bomb did not detonate, however it still managed to damage the battleship's artillery.The torpedo attack on the U.S.S. West Virginia caused the most damaged, as it tore through the ship's port side and caused flooding. Lt. Claude V. Ricketts and other crew members saved the ship from capsizing by utilizing their damage control training.1 The U.S.S. West Virginia was abandoned and sank to the bottom of Pearl Harbor, later to be resurrected and repaired to serve the rest of the war.

On January 9,1947 "WeeVee" was decommissioned and became part of the Pacific Reserve Fleet until 1959 when she was sold for scrap to the Union Minerals and Alloys Corp. of New York City. In 1961 numerous items from the ship were donated to the state of West Virginia. The mast of the ship went to WVU and was installed as a Pearl Harbor Memorial on May 11, 1963. Ceremonies honoring Pearl Harbor day and veterans have been held in front of the mast annually since the 1970s. The bell that is rung during these ceremonies was placed next to the mast on December 7, 1967, and is from the armored cruiser U.S.S. West Virginia.2

On May 19, 2016, Professor Satake of WVU and his class started a petition to Congress to create a permanent memorial honoring the USS West Virginia at Pearl Harbor. You can find the petition at change.org. The link is provided below.3