The Buffalo Bank was established in 1919 and was the only bank established in Buffalo, West Virginia at the time. On October 1, 1953, the bank was robbed by three armed men who were later arrested with a large sum of money in their getaway car. The bank closed when it was moved to Eleanor, West Virginia, and the building is now operating as the Buffalo Historical Society and Welcome Center. 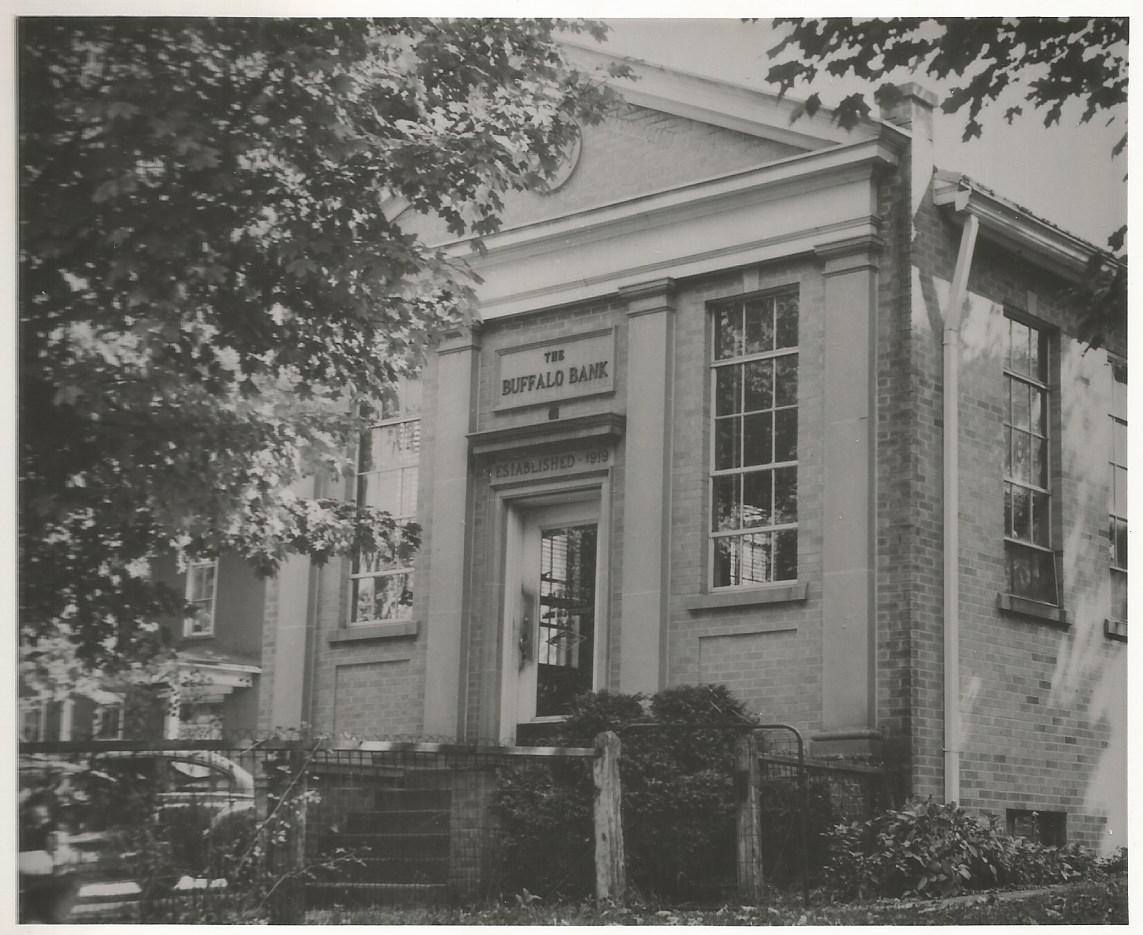 The Three Robbers with the stolen money still in their pockets 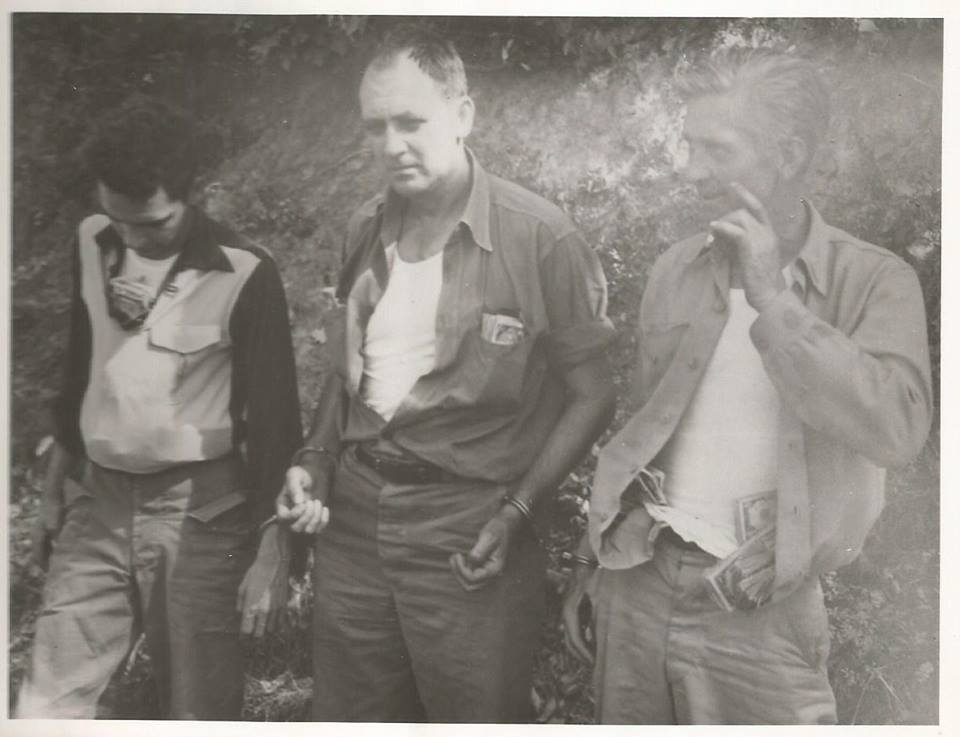 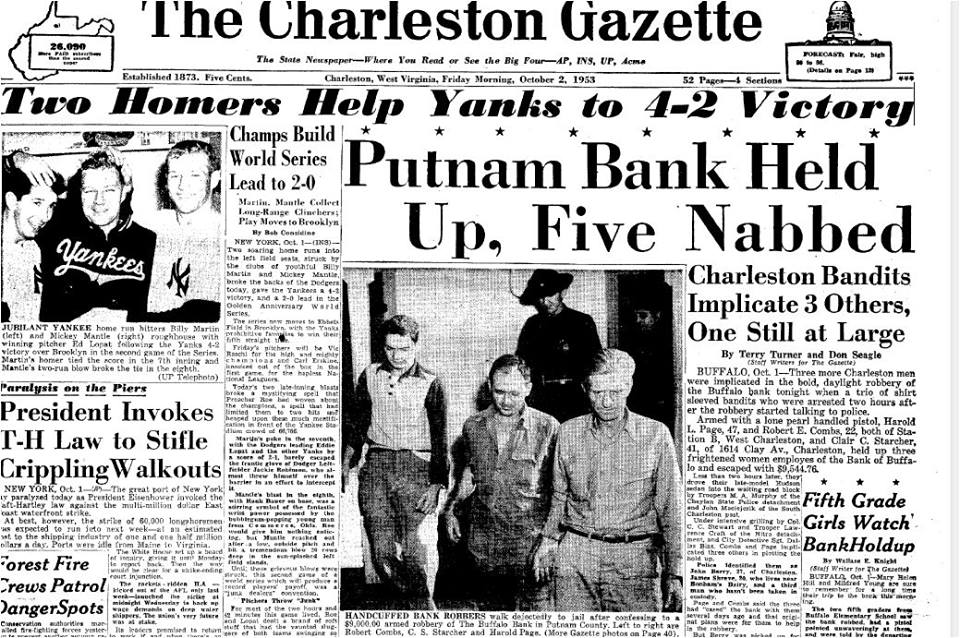 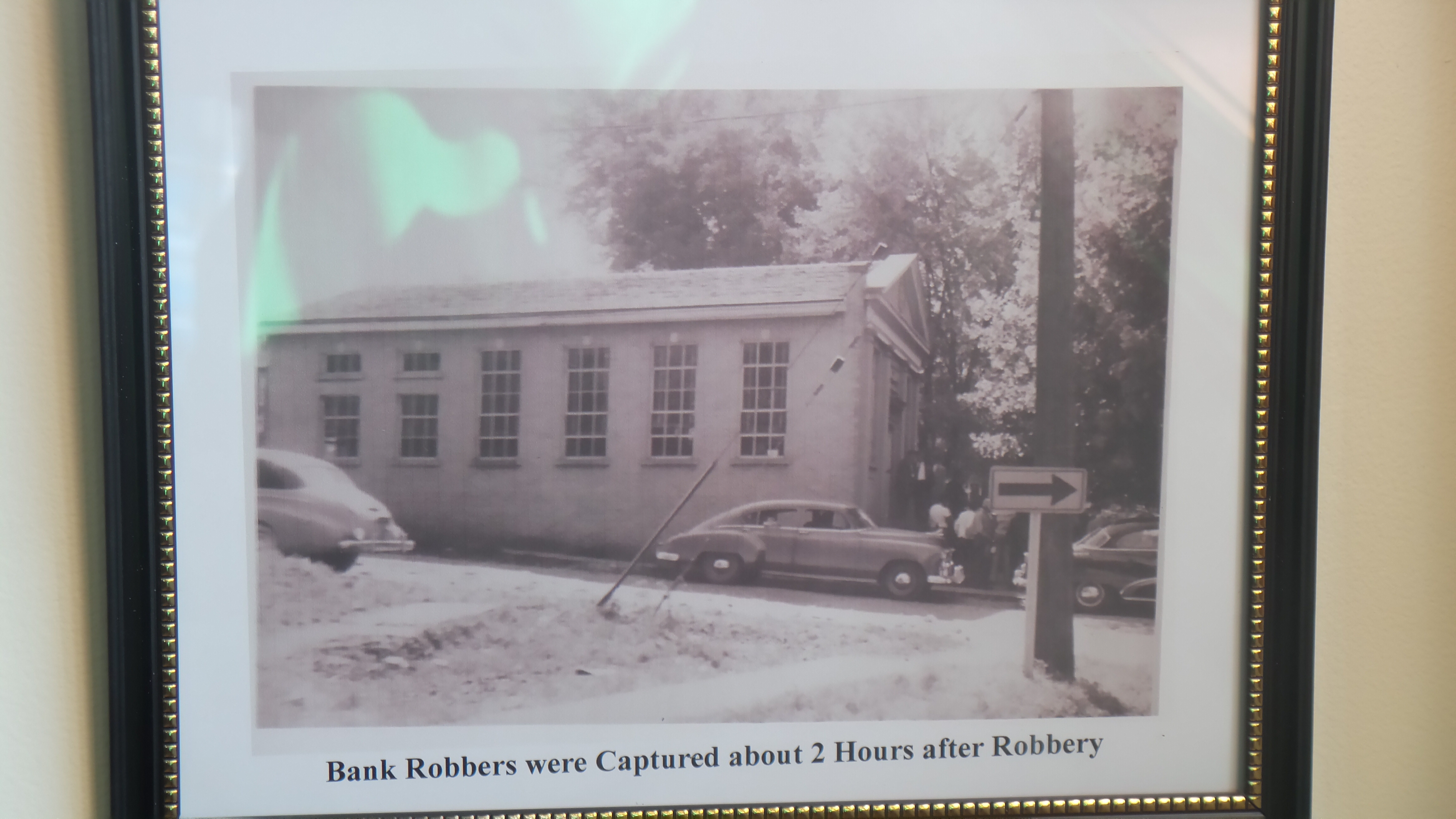 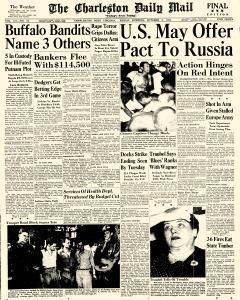 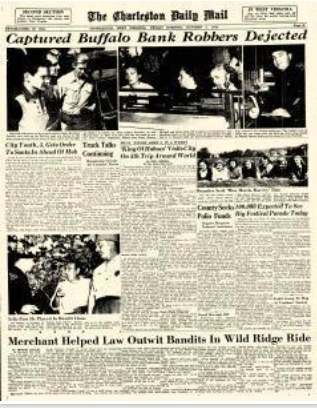 Jim McCoy describes how his dad typically responded to calls, and what he remembers his dad telling him about the bank robbery in 1953.

Originally run by president of the bank John L. Dickinson with teller L.L. Lilly, the Buffalo Bank was opened March 1, 1919 and was the only bank operating in the town located in Putnam County, West Virginia at that time. Upon its opening, its capital was estimated at $25,000. With its yellow brick and beautiful interior architecture, it was the most modern building in town for a long period. On October 1, 1953, when the bank was under the command of F. M. Brown, it made local headlines for an armed robbery. Three robbers, Harold L. Page, Robert E. Combs, and Clair C. Starcher, made their way inside the bank and to the counter with a pearl-handled pistol and demanded cash from the bank tellers.

The tellers, Edith Cain, Ann Haer, and Maxine Mitchell were inside the bank during the robbery. While it was occurring, two eleven-year-old girls, Mildren Young (Millie Stover) and Mary Hill (Susie Tucker) walked in. The three bandits made off with just over $9,500 and were seen leaving in their getaway car. All three men were eventually caught less than two hours later by the local police via a roadblock, however, it was not without challenge. Jim (James) McCoy, who would have been around six at the time, has some recollections of the day, mostly passed onto him by his father, Don (Donald) McCoy.

Jim was born at St. Francis hospital in Charleston, West Virginia, in October of 1947, but grew up in Buffalo with his parents. His father, Don, served as mayor of the small town, and owned a television and appliance store a block away from Buffalo Bank named Buffalo Electric. Jim said he believes Don was still mayor at the time of the robbery. Jim recalls the brick building with granite trim, which he said had the feel of 1920s architecture, and remembers taking deposits to Maxine Mitchell at the bank for his father, where he had an account, as well as “Mr. Brown” as head of the bank at the time. He also recalls Don relaying specific events about the day of the robbery to him as a child.

According to Jim, the bandits were not from the small town of Buffalo. They were likely organized crime men from a larger city “looking for easy pickings,” and after the robbery, fled down what he believes was U.S. 35. He said during the chase, state police were called and began shooting, but the thieves had “Tommy guns” (Thompson submachine guns) and the police were “outgunned,” so they held back on the chase until the roadblock was set in place. He said if his dad was mayor at the time, the call he received would have come from Sheriff Oafie Stone.

Jim’s brother, Mark McCoy, while too young to remember the robbery itself, also had a few memories of Buffalo Bank. Mark was born at Thomas Memorial Hospital on January 15, 1941, making him around four years old at the time of the robbery and one of the first babies to be born at the hospital that had only opened January 1 of that year. In addition to recalling going to the bank with his father to see Maxine Mitchell, who was the town notary, he also said he specifically remembers the smell of money and smoke in the bank, since public smoking was permitted at the time. According to Mark, “back then, people smoked everywhere…you smoked in the bank, you smoked in the grocery store, you smoked in the funeral home.” He also said the bank had the appearance of a big-town bank, but scaled down, and the slight grade it was on made it more impressive, “at least to a four-year-old.”

After the robbery and subsequent roadblock, the men still had the money they had stolen stuffed into their jackets when they were caught. All of the money was recovered. The Buffalo Bank was later bought out by a bank in Eleanor, West Virginia. According to Mark, Roy Hamilton, who is also a pastor in Eleanor, was the president of the bank at that time, and Roy sold the building for just $1. The bank was moved and closed, to which Mark said people were upset, since it was the only bank available in the small town. The building in Buffalo, however, still stands as the Buffalo Historical Society and Welcome Center.