Built in 1886 as the station house of the 17th Police Precinct of the City of Brooklyn, this Romanesque Revival style, three-story building with a sandstone base features a distinctive corner tower. The local precinct later became the 75th in the Borough of Brooklyn. The NYC police stopped using the building in 1973 and the city sold the building to Peoples Baptist Church three years later. A three-story garage to the west, attached to the station by a hyphen passageway, was added in 1926 to replace the original stable. The former precinct house was listed in the National Register of Historic Places in 2007 for its architectural significance. A new owner has stabilized the building, but it remains vacant. 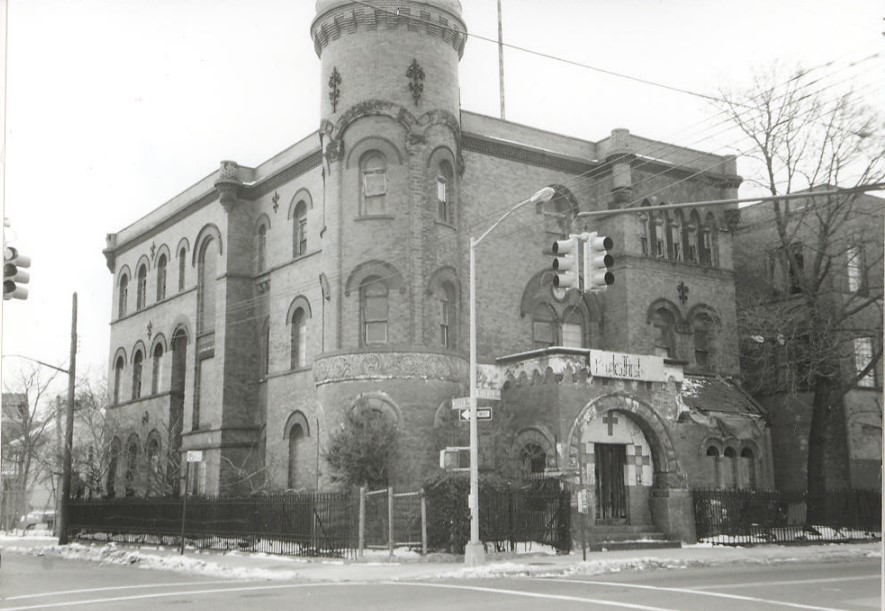 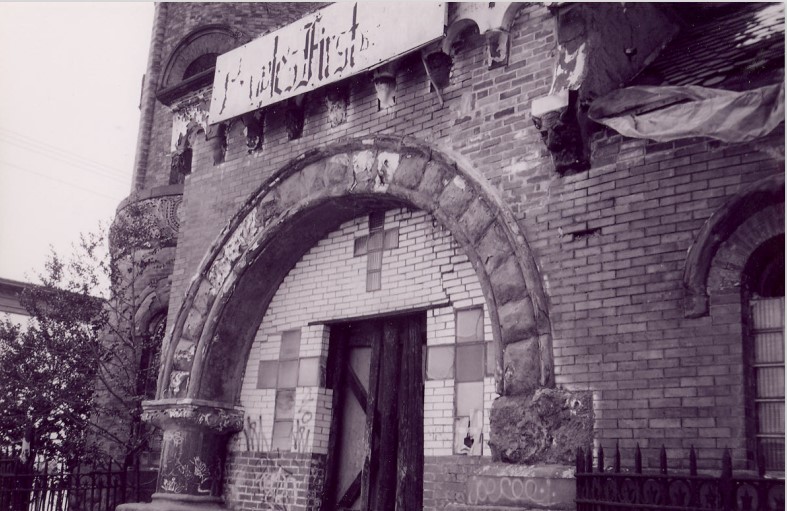 Detail of decorative stonework near base of corner tower (ca. 2007) 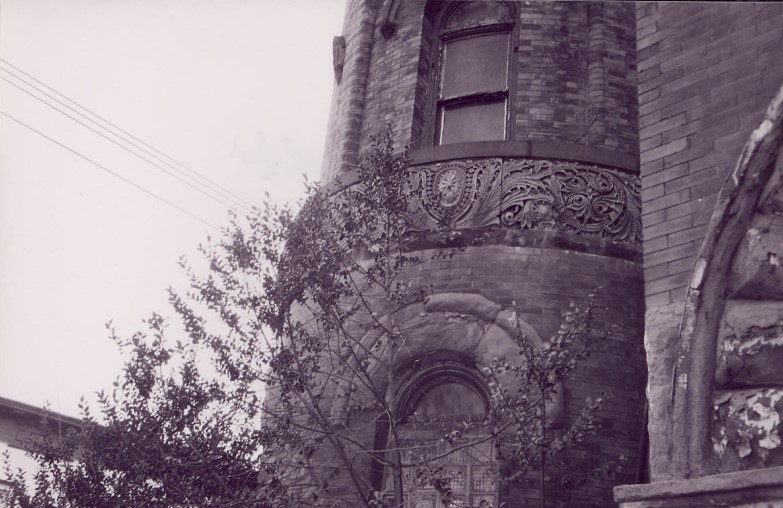 Emile M. Gruwe is listed as the architect who designed the precinct station house, but a local newspaper of the era credited a former assistant engineer in the City of Brooklyn's Public Works Department named George Ingram. Ingram left city employment in 1890 to set up his own practice and may have collaborated with Gruwe. The foundation and water table are made of brown sandstone, while the rest of the building is brick. The round corner tower is decorated with a finely carved arabesque belt course above the first story. The main entrance is accented by an arabesque spring block, and a sandstone corbel near the entrance is a carved lion's head. Dogs and other animals are carved into corbel blocks above the entrance. The main entrance was filled with a brick and glass block door surround in the 1970s when the building was a church. Most of the windows are arched and the building is decorated with iron beam anchors. The cornice is trimmed with sandstone and the roof is flat; a crenellated roof edge has been removed.

The Liberty Avenue station house was built for the 17th Precinct and was similar to another station house recently completed for the 18th Precinct at 4302 Fourth Avenue. Having a police station in a prominent location on a corner was a common pattern in Brooklyn, and a number of stations were built in the late nineteenth century as the population boomed. The station was designed to hold 80 policemen, cells in the basement for male and female prisoners, and a stable that would hold 12 horses and the patrol wagon. A patrolman in the 17th Precinct was fined in September 1889 for giving counsel to a prisoner and divulging the department's business; James L. Clark was docked five days' pay.

There were 29 precincts in Brooklyn by 1898, when the city became one of the five boroughs of New York City. In November 1922, land was chosen to build a new station house for the 75th Police Precinct in Brooklyn at the northeast corner of Empire Boulevard and New York Avenue. One month later, the Board of Estimate and Apportionment rescinded a previous resolution from August 1920 where the Police Commissioner had chosen a different location for a new station house for the 75th. It seems that both plans fell through. The 17th Precinct became or combined with the 75th Precinct by the 1930s.

The police moved out of the Liberty Avenue building in the early 1970s; the city sold the structure several years later and it became a church. When the former police station building was documented in 2003 for possible National Register listing, the interior had deteriorated but the original walls were intact. The building was still owned by Peoples First Baptist Church in 2003. The church hoped to establish veterans' housing or a domestic violence shelter in the building in the early 2010s, but it would have taken about $20 million to renovate. The vacant building was sold in 2016 to Triple Five Holdings LLC. The company applied for a permit in 2018 to insert new floor joists to stabilize the building, but more work would need to be done to make the vacant structure occupiable.