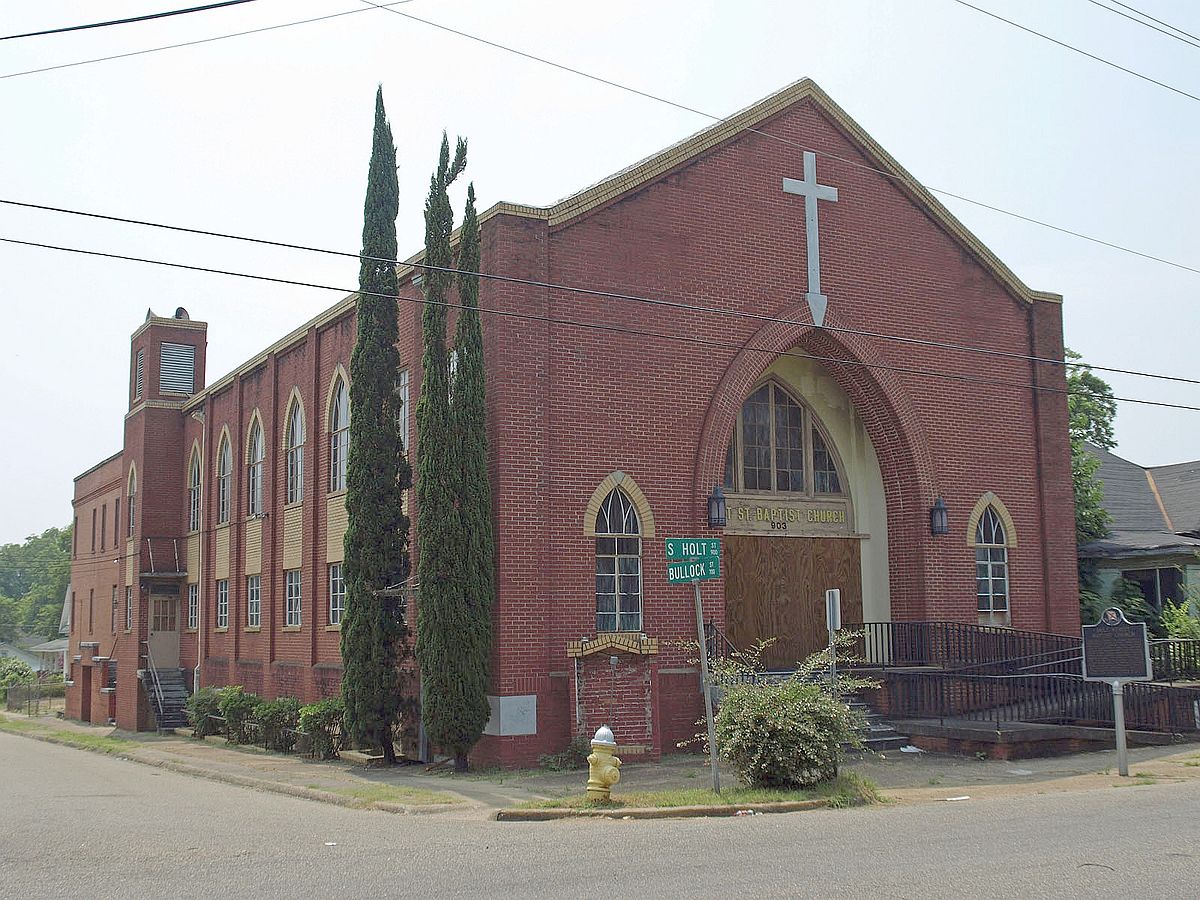 Built in 1913 on the corner of South Holt Street and Bullock Street in Montgomery, Holt Street Baptist Church served as the site of the first mass meeting of the Montgomery Improvement Association (MIA). The meeting took place at the church on the evening of the first day of the boycott on December 5, 1955. That night, King delivered his famous Holt Street Address, and Georgia Gilmore, civil rights activist and cook, started the Club from Nowhere to help support the boycott. Holt Street Baptist Church became a frequent site of these protest meetings during the yearlong boycott.

This one-and-a-half-story brick was home to the congregation of Mt. Zion AME Zion Church during the 1955 Montgomery bus boycott. The Montgomery Improvement Association, the organization that led the bus boycott, was formed in the basement of this church in December 1955. The foundation of the building dates to 1899, and the current church edifice was completed in 1921 after extensive renovations. The Classical Revival style church has a central bell tower and steeple with two front towers on either side. During the renovation in 1921, the original wooden structure of the 1899 church was covered by a brick veneer.

3. United States District Court for the Middle District of Alabama; Browder vs. Gayle (1956)

This federal courthouse was the site of several landmark cases, including Gomillion v. Lightfoot in 1958. The case found that electoral districts were designed to reduce the potential influence of Black voters, thus violating the Fifteenth Amendment to the Constitution. Two years prior, the courthouse was home to Aurelia S. Browder v. William A. Gayle, a pivotal case that led to the end of the Montgomery Bus Boycott. The U.S. District Court ruled that bus segregation violated the Fourteenth Amendment. The ruling was upheld by the Supreme Court, a decision that provided African American plaintiffs with the legal power to challenge segregation in public transportation.

This historical marker was dedicated in 2008 and marks the location where Rosa Parks boarded a Montgomery bus on December 1, 1955. On that day, Rosa Parks was arrested for refusing to give her seat to a white passenger. A secretary of the Montgomery National Association for the Advancement of Colored People (NAACP) with a long history of defending the civil rights of Black women in previous years, Parks was a highly regarded member of the Black Montgomery community. Although she was not the first Black woman in Montgomery to challenge segregation that year, news of her arrest led to a mass meeting that inspired Black citizens to boycott the city bus system the following week. When city leaders refused to work with local pastor Martin Luther King, Jr., the Black community launched a boycott that lasted 381 days. Thanks to the economic power of the Black community and a successful court challenge, the Montgomery Bus Boycott ended segregation in Montgomery. In retrospect, the bus boycott also served as a model of successful activism through non-violent strategies of resistance. It is important to note that Rosa Parks was a seasoned civil rights activist at the time of her arrest, and her leadership inspired a young Martin Luther King Jr. She remained active and is sometimes referred to as the “Mother of the Civil Rights Movement.” 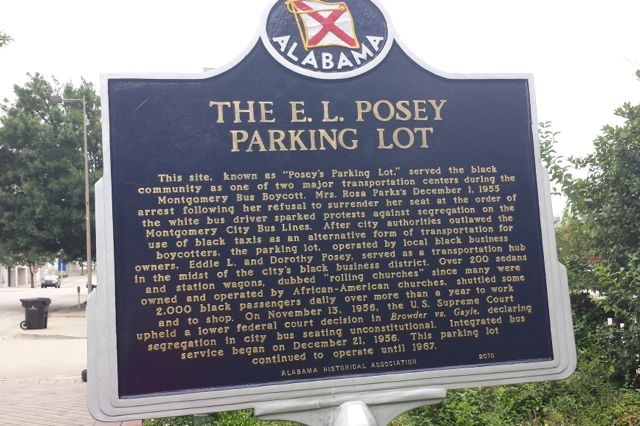 During the Montgomery Bus Boycott, this corner was home to a parking lot that served as a staging ground for cars driven by civil rights activists. Known at the time as "Posey’s Parking Lot” this was one of two major African American community transportation centers during the Montgomery Bus Boycott. The historical marker was unveiled by the Alabama Historical Association on December 1, 2010, the anniversary of Rosa Parks’ arrest.

Established in 1877 by former slaves, this congregation was has played an integral role in the long civil rights movement of the past century-and-a-half. Martin Luther King Jr. was the pastor of the church from 1954 to 1960, and its name now reflects his influence. The congregation was established as the Second Colored Baptist Church in 1877. The congregation later changed its name in honor of Andrew Dexter. in 1978, the name was changed to Dexter Avenue King Memorial Baptist Church, in memory of Dr. Martin Luther King, Jr, the 20th pastor of the church. During his time in Montgomery, Dr. King led the Montgomery Bus Boycott.

This two-story, flat-roofed brick building was constructed in 1954 by the Montgomery African American bricklayers’ union. The structure served as an office building and union hall, which the Black brick masons’ union used for meetings. From February 1956 until 1960, the building served as the headquarters of the Montgomery Improvement Association. The building was listed on the National Register of Historic Places in 2020. 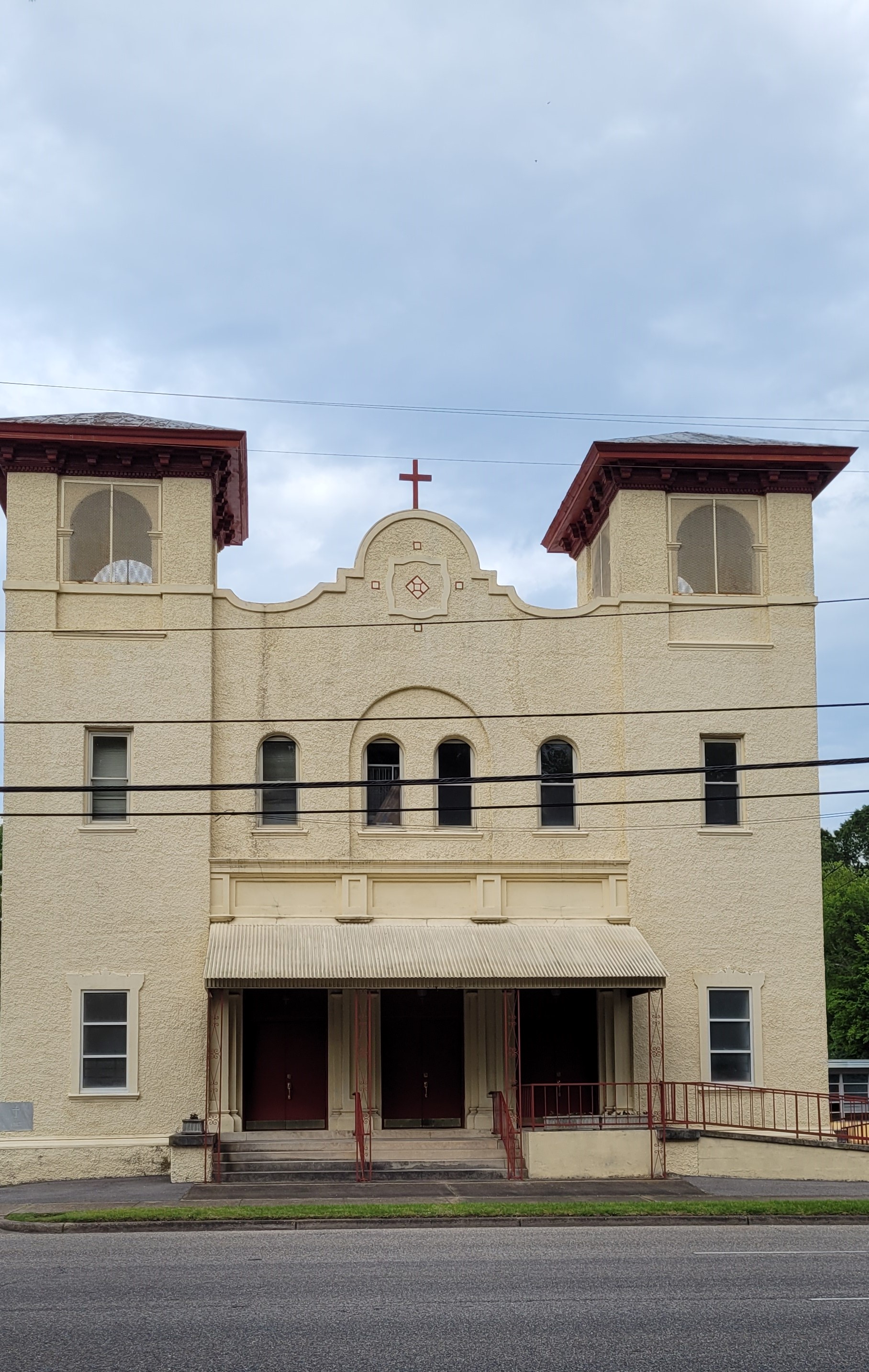 St. John the Baptist Catholic Church was first organized in 1908, making it one of the oldest African American Catholic churches in Montgomery, Alabama. The Spanish Mission-style church that stands today was constructed in 1915 and continued to serve the congregants until the construction of its new building in the latter part of the twentieth century. 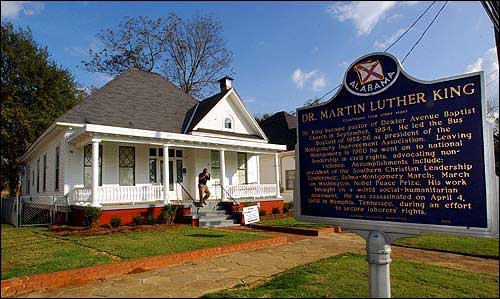 This small museum is located in the parsonage that was home to Martin Luther King Jr. and Vernon Johns. During his early tenure in Montgomery, King and his family lived at this home prior to the start of the Montgomery Bus Boycott. The home was also repeatedly bombed by white supremacists during the years of King's leadership of the Montgomery Bus Boycott. The home today is open to the public to view historical exhibits related to Vernon Johns, Martin Luther King, Jr. and other African Americans in Montgomery.

Dr. Richard H. Harris Jr. was born on August 22, 1918, in Montgomery, Alabama to Richard Henry Harris, Sr., and Evelyn Jones Harris, Richard Henry Harris Jr. was a prominent businessman and civil rights activist. He lived in this home with his wife Vera McGill Harris and his four children: Adrian, Valda, Richard III, and John. The home was originally built at the turn of the century as a one-story frame building street with a raised covered front porch. The home was remodeled around 1959, which added a second story and a half room on the third floor as well as other additions. Harris played a critical role in coordinating the transportation system used by activists in the 1955 Montgomery bus boycott. He owned and operated Dean Drug Store, Montgomery’s oldest Black drug store. In 1961, the Harris house sheltered a group of Freedom Riders when they were attacked in town.

Located on the corner of High and Jackson Street, the Ben Moore Hotel stood at the center of a vibrant African American business district.Opened in 1951 by Matthew F. Moore, the Ben Moore Hotel served as the first licensed hotel to serve African Americans in Montgomery and the first high rise outside of the downtown area. The hotel was featured in the Green Book and offered safe lodging and a place to eat for African American travelers. Made of brick and concrete, the building cost an estimated $75,000 and was constructed in the Modern commercial style of the 1950s. Ben Moore Hotel served as an entertainment hub and played a key role in local civil rights activism during the 1950s and 1960s. 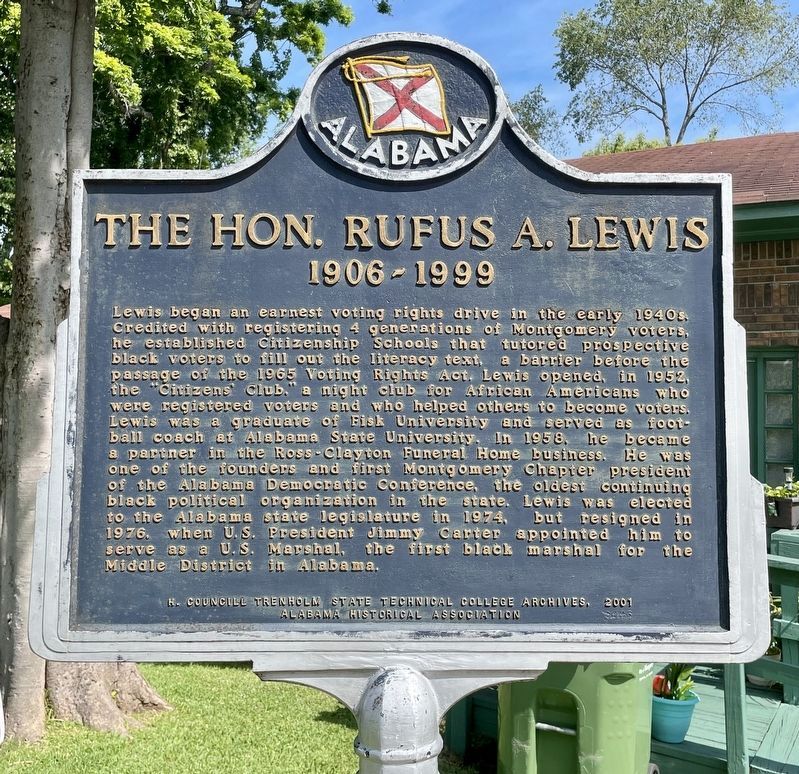 Dedicated in 2001, this historical marker shares the contributions of Rufus Andrew Lewis, a key figure during the Montgomery Bus Boycott. Born in Montgomery on November 30, 1906, to Jerry and Lula Lewis, Rufus Andrew Lewis continually advocated for his community as a civil rights leader, a teacher, and a voting rights activist. During the bus boycott, Rufus led efforts to organize hundreds of private automobiles and mapped out carpool routes and organized drivers thereby enabling thousands of Black residents to avoid using the city busses. In 1976, Lewis became the first Black marshal for the Middle District in Alabama after President Jimmy Carter appointed him to serve as a U.S. Marshal. 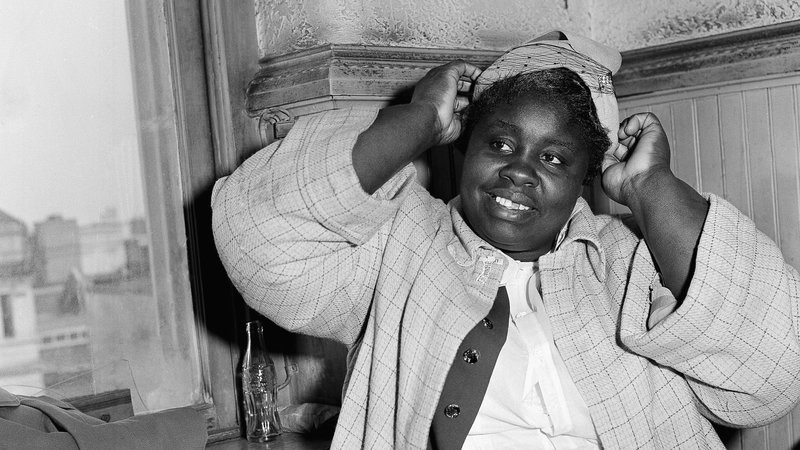 This historical marker is located at the former home of civil rights activists and Montgomery Bus Boycott leader, Georgia Gilmore. Gilmore organized the Club from Nowhere — an organization of maids, service workers, and cooks—to financially support the efforts of the Montgomery Improvement Association (MIA) through the sale of baked goods and food. She also opened a restaurant from her home where members of the MIA could eat, congregate, and strategize. Numerous activists including Dr. Martin Luther King, E.D. Nixon, Dr. Ralph Abernathy, and more visited Gilmore’s restaurant. Georgia Gilmore reflects the tenacity of protestors during the bus boycott and the gendered division of labor that would inspire future female leaders to push for equal rights and leadership roles for women. This Clio entry includes two audio recordings of local residents and historians who share their recollections of Gilmore, including the fact that this historical marker was placed at a home Gilmore lived in after the bus boycott. That home where Gilmore lived during the bus boycott no longer exists so the marker was placed at the home where she lived in later years. The home is adjacent to the former home of Rufus Lewis on the corner of Dericote Street and Rufus Lewis Lane. Georgia Gilmore died in 1990. On the morning of her death, she was busy preparing food for attendees of the 25th anniversary of the Selma to Montgomery march. 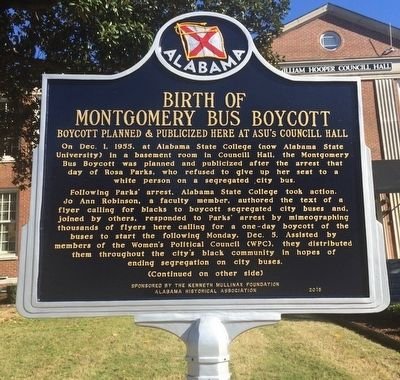 Built by Bear Lumber Company of Montgomery, Councill Hall is a three-story brick building that housed classrooms, laboratories, and administrative offices for Alabama State University (ASU). The building was named in honor of William Hooper Councill, a formerly enslaved man who became the first president of Alabama A&amp;M University. After the arrest of Rosa Parks’ arrest on December 1, 1955 for violating segregated seating on Montgomery buses, English professor Jo Ann Robinson used the basement of this building to create flyers calling for African American residents to not ride city buses on Monday, December 5. Robinson along with members of the Women’s Political Council and two students mimeographed copies of the flyer in the basement and distributed the material throughout the city. The group was effective in spreading the word and on the day of the boycott, ninety percent of the city's African American bus riders participated. Recognizing their potential to cripple the city bus system by withholding their patronage, a mass meeting of African American leaders and residents decided to continue the boycott.The one-day protest became a thirteen-month boycott, which ended segregated seating on city buses.