Dr. Richard Bailey, local historian, talks about the Ben Moore Hotel and the importance of High and Jackson Street.

Located on the corner of High and Jackson Street, the Ben Moore Hotel stood at the center of a vibrant African American business district.Opened in 1951 by Matthew F. Moore, the Ben Moore Hotel served as the first licensed hotel to serve African Americans in Montgomery and the first high rise outside of the downtown area. The hotel was featured in the Green Book and offered safe lodging and a place to eat for African American travelers. Made of brick and concrete, the building cost an estimated $75,000 and was constructed in the Modern commercial style of the 1950s. Ben Moore Hotel served as an entertainment hub and played a key role in local civil rights activism during the 1950s and 1960s. 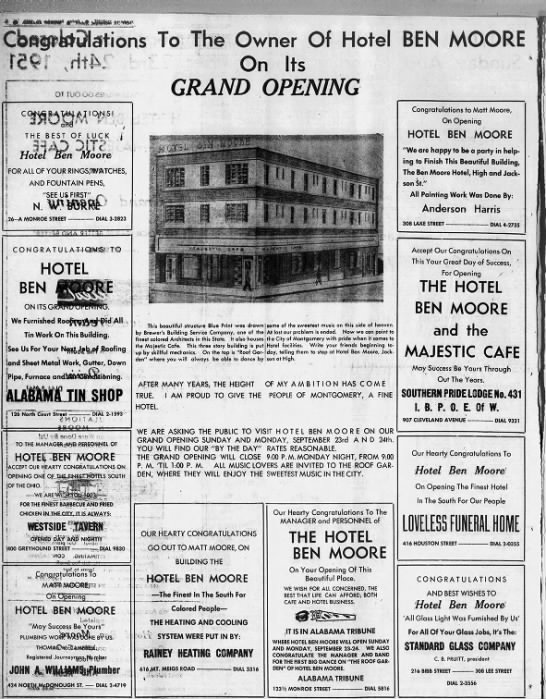 Matthew F. Moore, owner of the Ben Moore Hotel and the Majestic Cafe

Civil rights demonstrators outside the Ben Moore Hotel on Jackson Street in Montgomery, Alabama, before marching to the Montgomery County courthouse. 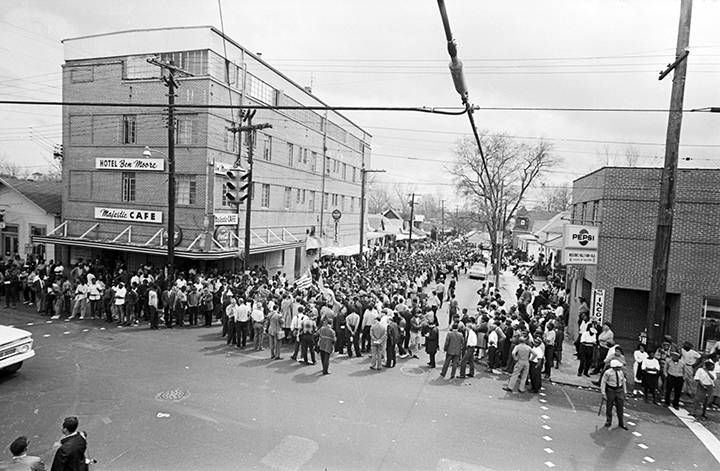 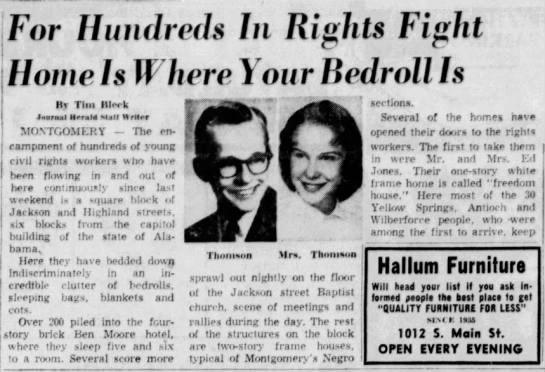 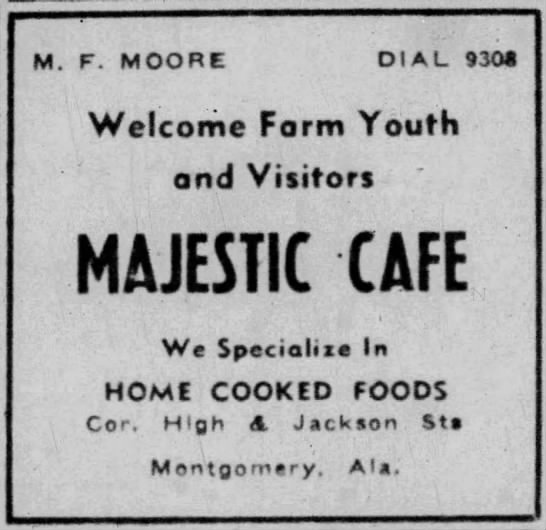 No "For Colored Only" Signs at the Ben Moore Hotel 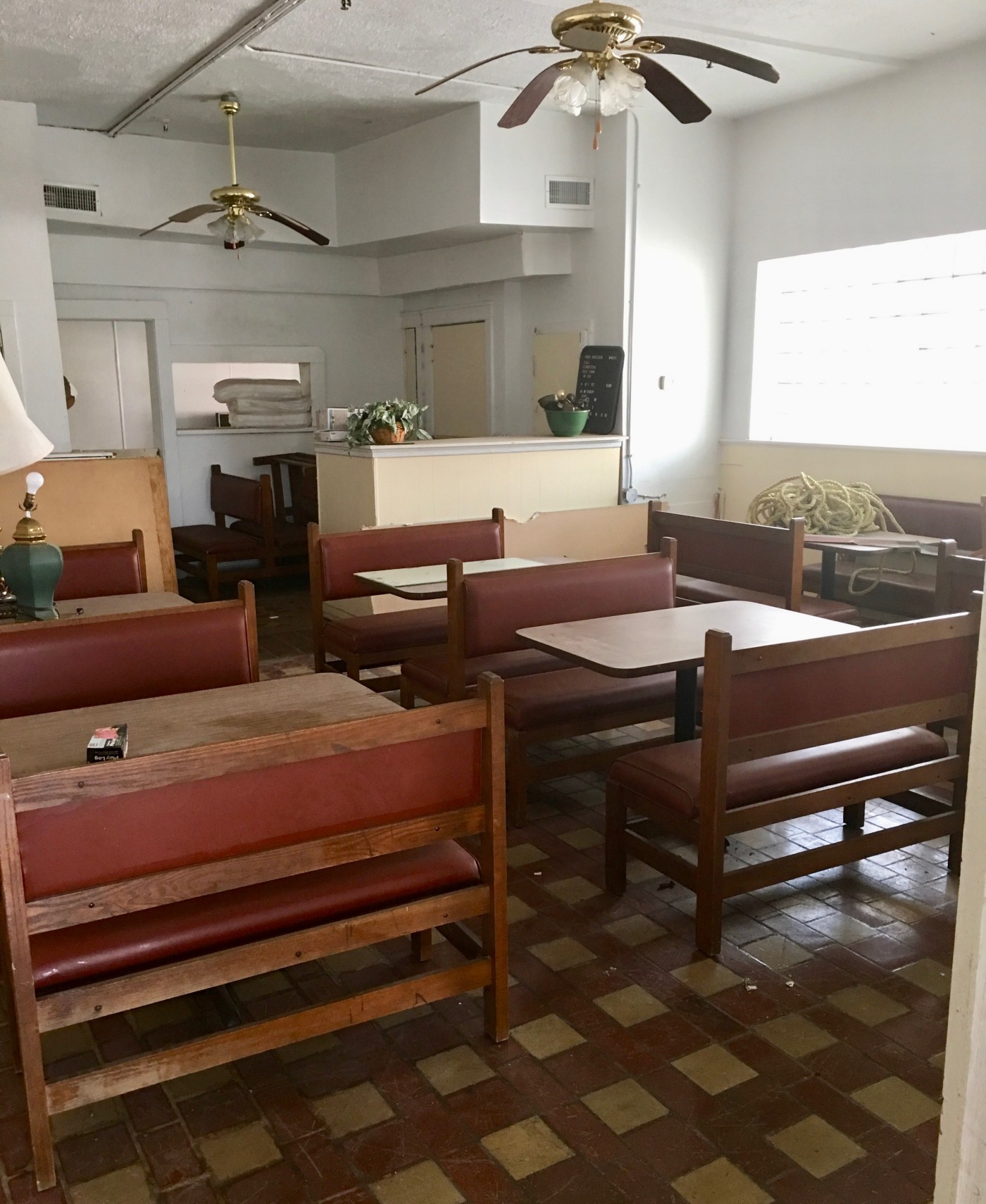 Nelson Malden inside the Malden Brothers Barber Shop, circa 2018. 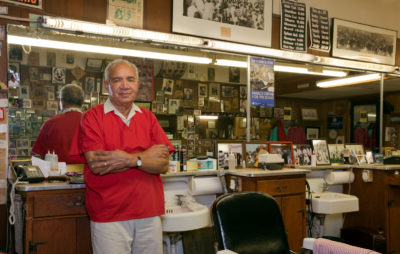 Nelson, Marvin, and Spurgeon Malden in the Malden Brothers Barbershop, 1959. 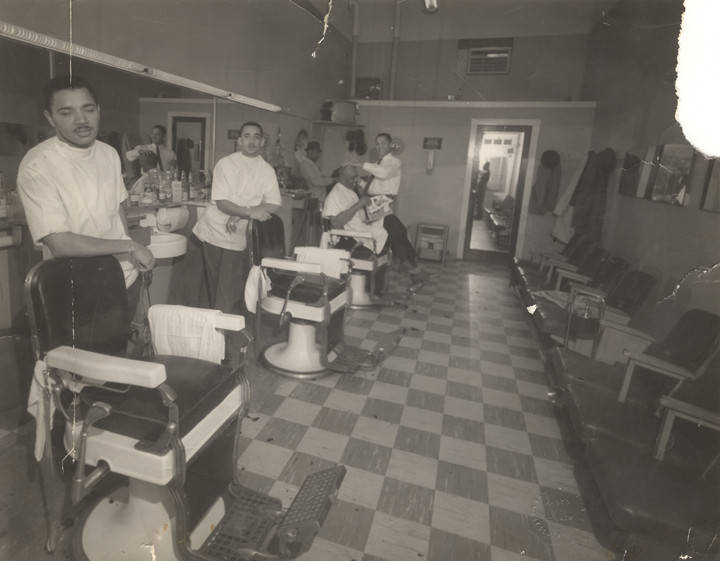 Dr. Valda Montgomery, daughter of Dr. Richard Harris Jr., talks about the Ben Moore Hotel and the Majestic Cafe during the 1950s.

Matthew Franklin Moore opened the doors of the Ben Moore Hotel on September 23, 1951. He named the business in honor of his father, Ben F. Moore, who was born a slave in Alabama. When Moore constructed the hotel, he merged his two businesses into one building. Before opening the hotel, M.F. Moore owned and operated the Majestic Café in the white building on High Street (this building now houses the Tours of Montgomery).[1]

The Majestic Café and other businesses occupied the first floor including the famous Malden Brothers barbershop, where Nelson Malden cut Dr. Martin Luther King Jr.'s hair. Twenty-eight rooms took up the space on the second and third floors where guests enjoyed suites with bathrooms and showers. The rooftop garden restaurant on the fourth floor, also known as the Afro Club, provided guests and locals with entertainment from some of the best African American musicians of the period. Artists such as B.B. King and Tina Turner performed alongside more local performers such as Bobby Moore and King Tut. Skyline view from the club made it a popular spot as an entertainment space and for civil rights activism. Activists such as Rev. King, E.D. Nixon, and more gathered to dance, eat, socialize, and strategize at the restaurants’ tables. Its location at the top of the Ben Moore Hotel gave diners unrestricted views of Montgomery’s scenery and alerted them of possible dangers. From their vantage point, civil rights leaders could see authorities or white vigilantes approach the hotel. If someone deemed the situation hazardous, diners could slip through the secret underground room accessed through a pantry in the building.[2]

In 1960, Alabama State College students (now called Alabama State University) attempted to march to the Montgomery County Courthouse without a permit. The group met with Martin Luther King Jr. at the Ben Moore Hotel to plan the protest. On March 1, 1960, Dr. King, Ralph Abernathy, James Forman, Martin Luther King Jr., and Jesse Douglas led a group of more than 1000 on a march to the county courthouse. Five years later, the hotel provided shelter to hundreds of SNCC (Student Non-Violent Coordinating Committee) workers in 1965. No guests have stayed at the Ben Moore since the late-1970s and the building now sits like a time capsule with chairs and tables still in place. Dr. Richard Bailey has unveiled a historical marker focusing on Ben Moore at the re-dedication of Lincoln Cemetery in 2021.[3]

Tim Bleck. “For Hundreds in Rights Fight, Home is where your Bedroll Is,” The Journal Herald, 19 March 1955