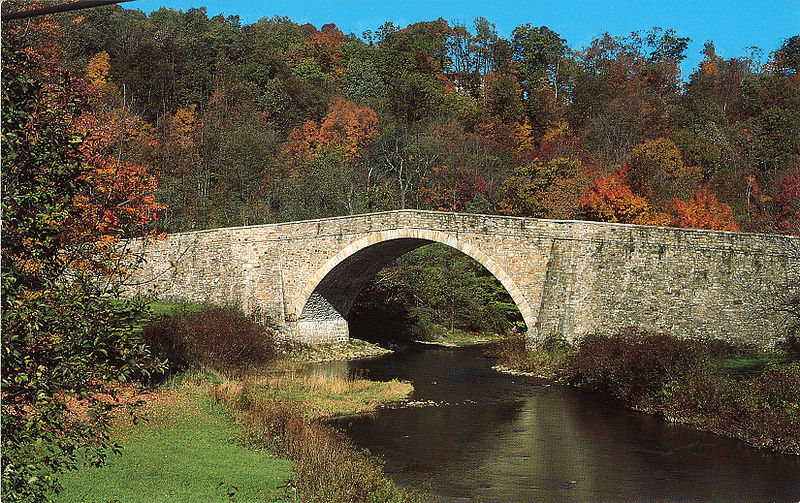 Built in 1813 under the supervision of superintendent David Shriver Jr., the Casselman Bridge was erected as part of the 620-mile Cumberland Road, which would later become part of the larger National Road, the first major federal highway, that connects the Potomac and Ohio Rivers. The bridge served as a major passageway across the Casselman River for early 19th century settlers and westward travelers, as well as pedestrians, stage coaches, wagons, motorized traffic, and livestock through its use 118 years of service.

The Casselman Bridge extends 354 feet and spans 80 feet with a 30-foot-high arch, making it the largest bridge of its kind in the United States at the time of its construction. Construction began in late 1813, but was not fully completed until 1815 due to increased rains and other delays. The bridge features a single stone arch, constructed primarily of large stones and rubble, with large stone abutments on both ends.

Maintenance of the bridge had to be performed throughout its history, most notably to accommodate for motorized traffic. The bridge remained in use until 1933 when a steel bridge was erected nearby as part of US Route 40. The bridge was then closed to vehicles in 1953, with additional maintenance being performed in later years. Restoration efforts included the repair of a large hole, as well as resetting some of the stones that had fallen out of place.

The bridge was closed to motorized traffic in 1953 and subsequently restored through federal funding. It was designated a National Historic Landmark in 1963 in recognition for its contribution to U.S. heritage. It is now owned by the State of Maryland and preserved as part of the Casselman Bridge State Park.

A historic marker is posted on both ends of the bridge and reads: