Cashtown Inn is a historic inn that has been housing travelers since the early 19th century. During the Civil War that devastated the country from 1860-1865, Cashtown Inn played a role in the Battle of Gettysburg. Because Cashtown Inn was involved in the troop movement and before, during, and after the battle of Gettysburg, its historical relevance has kept it preserved and popular until today. The preserved architecture allowed Cashtown Inn to be featured in the movie Gettysburg, and several actors stayed in the Inn during filming. Visitors stop to experience the history of the area, the relaxing Tavern and Bed and Breakfast, and possibly a paranormal encounter. 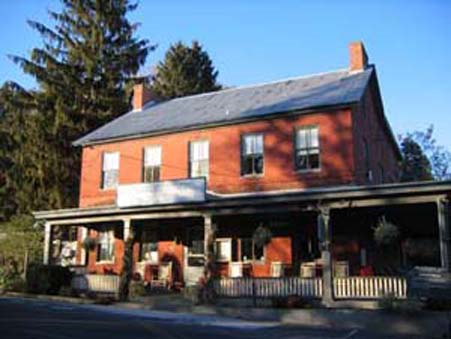 The Retreat of General A.P. Hill’s Troops after the Battle of Gettysburg through Cashtown “Self-Guided Tours of Gettysburg, Pennsylvania.” Accessed April 9, 2019. https://traveltips.usatoday.com/self-guided-tours-gettysburg-pennsylvania-5031.html.

Scene from the movie Gettysburg, featuring the Innkeepers at the time, Mr. and Mrs. Buckley. Cashtown Inn was one of the few original buildings used in filming. Gettysburg. (1993). [DVD] Directed by R. Maxwell. New Line Cinema. 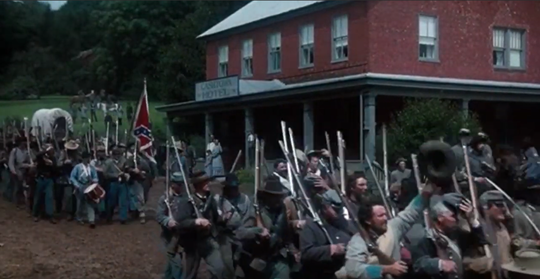 The Cashtown Inn served as an Inn since the beginning of the 19th century, and still serves the same function today. Photo by C.C. Kuhn Youngblood, Suzanne. Cashtown: During the Gettysburg Campaign, 1863, 2013. 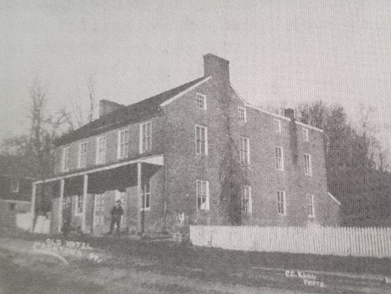 Although it is most famous for it's role during the Civil War, the history of Cashtown Inn begins over 50 years before. It was built around 1797 by Peter Marck. Marck was known for demanding cash for not only the Inn, but the tollgate that was located just east of the Inn. Because of this, the town and the Inn became known as ‘Cashtown.’1 It has been used as a functioning Inn since 1815.


Years later, the Civil War came to Cashtown. In June of 1863 the Confederate forces had entered Pennsylvania and were pushing north. The Union Army came to meet them, and Lee ordered his troops to concentrate near Cashtown, although their final destination would be the nearby town of Gettysburg. On June 29th, the men of Lt Gen. A.P. Hill’s Third Corps passed by Cashtown Inn. The Innkeeper at the time, Jacob Mickley, wrote that it appeared as if “the entire force under Lee… passed within twenty feet of my barroom.” The Inn also served as headquarters for the unwelcome guests. General A.P. Hill was suffering from a chronic ailment as he approached Gettysburg, so he decided to establish his headquarters in the comfortable Inn, joined by Generals Henry Heth and John D. Imboden. All of Cashtown became an army camp during the days of the Battle of Gettysburg, and Cashtown Inn would have been bustling with activities as the events of the days unfolded. The stable next to the Inn, along with many of the houses nearby, housed many of the Confederate wounded. The plethora of carts, cannons, wagons, and carriages of Lees’ reserves were parked all through the town, including the orchard of Cashtown Inn. On the 4th of July, Lee’s troops retreated south, and Brigadier General John Imboden led the troops from Cashtown toward Chambersburg. 2  When they left, the Confederate Army took whisky, brandy, a wagon, firewood, shingles, chickens, hay, and destroyed many of Mickley's fields and orchard trees. After the war ended, he claimed over $2,000 in damages, sold the Inn, and moved West.3

In the decades following the Civil War, Cashtown Inn suffered a decline in business, especially when the by-pass was created, cutting traffic on the Lincoln Highway. The owners considered consolidating it into low-income apartments. Charles and Carolyn Buckely came to own the property and decided to preserve the site because of it's historical significance. Since 2006, owners Jack and Maria Paladino have undertaken major structural renovations on the first floor. It currently functions as a Bed and Breakfast attached to a Dining Restaurant and Tavern. The original Tavern Room is the main dining room, and each room of the Inn is named after a Civil War General.4

The Inn has received some renown for its appearance in the film “Gettysburg.” Because much of the Confederate Army passed by the Inn on their way to Gettysburg, the movie shows the character General Lee watches his army march in front of the Inn. The owners at the time, Charles and Carolyn Buckley were featured as the innkeepers. The Inn is one of the few original buildings to be used in the film because most buildings have been renovated, destroyed, or updated. Many of the actors and directors ate at the Inn, and Sam Elliot stayed there for the three weeks of filming in Gettysburg.5 The Inn is also reputed to be haunted by ghosts from the Civil War. It is a popular site for prospective ghost-hunters hoping to see something paranormal. Supposedly, doors open, close, lock, unlock themselves. Guests hear a knock on the door when no one is there, and phantom horses stamp their hooves outside.6 The Inn is featured in a season 4 episode of “Ghost Hunters,” where paranormal investigators stay in the Inn to try to discover the extent of supernatural activity.

Since the early 19th century Cashtown Inn has been a place for travelers to rest, and since the Civil War it has attracted history enthusiasts as well. Because of its role in the Battle of Gettysburg, the Cashtown Inn has stayed preserved and popular until today.