The site of a historic 18th century road, Cowan's Gap State Park has experienced the American history of war, industry, and recreational history spanning from the 18th-21st centuries. 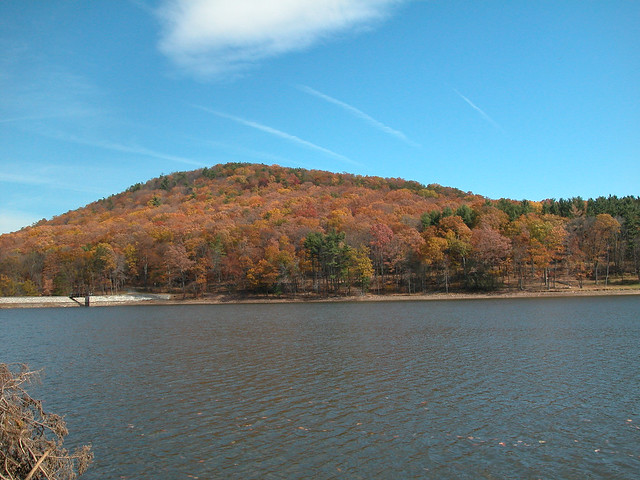 Cowans Gap was part of Burd’s Road, and important supply road during Braddock’s Expedition during the French and Indian War in 1755. Col. James Burd began a supply road that was supposed to reach Braddock’s forces at Turkey Foot. Braddock’s forces were working on Braddock’s Road from Fort Cumberland, Maryland, to the Forks of the Ohio River, in order to drive the French out of Fort Duquesne in present-day Pittsburgh. Burd’s Road climbed Tuscarora Mountain by passing through a gap eventually named Cowans Gap.

Braddock’s army was defeated and, as a result, Burd’s Road was never completed past Berlin in present-day Somerset County.

In 1758, the British again sent a campaign toward the Forks of the Ohio. General John Forbes, along with his aide, Colonel George Washington and second in command, Lieutenant Colonel Henry Bouquet, carved a new road (Forbes Road), which followed Burd’s Road through Bedford County then headed due west to the Forks of the Ohio.

General Forbes drove the French out of Pennsylvania. In 1763, Colonel Henry Bouquet again used Forbes Road to break the siege of Fort Pitt during Pontiac’s War, a Native American uprising that resulted from the end of the French and Indian War.

The name Cowan’s Gap reportedly comes from a Revolutionary War couple, John Samuel Cowan (a British Loyalist) and Mary Mueller, who married, eloped, and later settled in the area.

In the 19th century the area was used to mine iron ore, which industry led to the clear-cutting of portions of the forests in the gap and the valley every 20 to 25 years.

In 1893, Harrison Kalbach of Lebanon, Pennsylvania, began purchasing land and timbering rights amounting to 4,800 acres around Cowans Gap. Kalbach and Company built a railroad of wooden rails from Richmond Furnace up the mountain and into the gap to move the lumber to market. Today’s Richmond Furnace Road follows the old railroad right-of-way. Kalbach and his partner, Charles Spangler of McConnellsburg, operated a portable sawmill in the valley, cutting mainly pine and oak. The final cut was completed in 1907, leaving a landscape of over-cut forests and erosion.

In the 1930s, the recovery of Cowan’s Gasp fell on the nearly-created Civilian Conservation Corp (CCC), a New Deal program to relieve unemployment in men. The CCC built roads, trails, and recreational facilities; fought fires; planted trees; and participated in many other conservation activities.

Richmond Furnace Camp S-54 was built next to the new forestry station at Cowans Gap. From 1933 to 1941, the CCC built 30 miles of road, four bridges, 32 miles of fire trails, and 11 miles of telephone lines.

In Cowans Gap State Park, the CCC built the cabins, picnic shelters, and spent three years building the dam. The Cowans Gap Rustic Cabins are on the National Register of Historic Places.

Improvements continue at Cowans Gap, with additions like the campground and modern restrooms. Visitors today enjoy the scenic beauty of this historic park.

The park is open every day of the year, sunrise to sunset. Day use areas close at dusk.