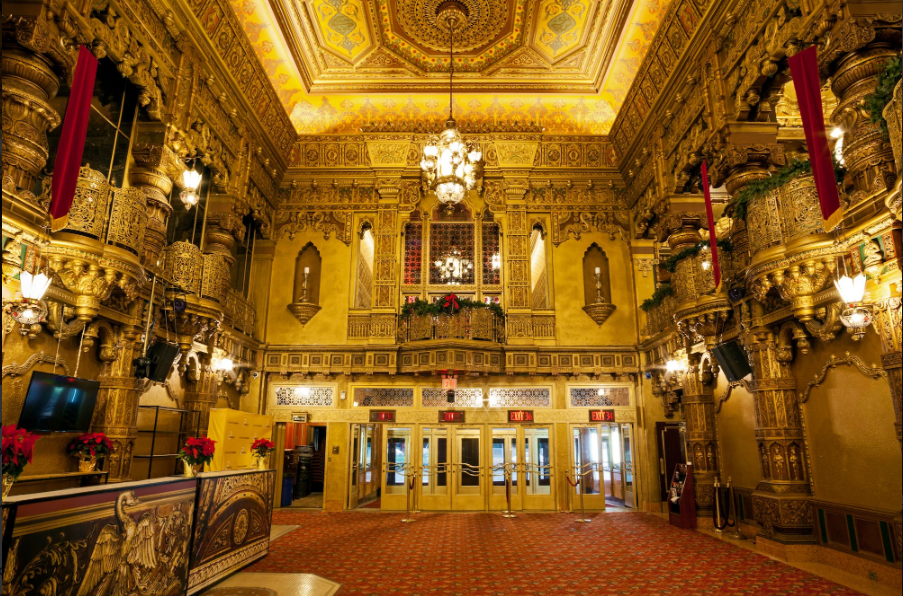 Originally called “Loew’s 175th Street Theatre”, the United Palace features eclectic décor which has resulted in an architectural style that has proven difficult for many experts to clearly name. Architect Thomas L. Lamb borrowed styles from “the Alhambra in Spain, the Kailasa rock-cut shrine in India, and the Wat Phra Keo temple in Thailand, adding Buddhas, bodhisattvas, elephants, and honeycomb stonework in an Islamic pattern known as muqarnas." This eclectic mix has been described as a “Byzantine-Romanesque-Indo-Hindu-Sino-Moorish-Persian-Eclectic-Rococo-Deco” in the 1990 book On Broadway: A Journey Uptown Over Time. Adding to this mix, “many authentic Louis XV and XVI furnishings" were brought in by tReverend Ike and congregation when the theater became the home of their church.

While the exact style may be difficult to pin down, it is indisputable that this building represents the height of the American “movie palace” movement – a movement which culminated in five “Wonder Theatres” constructed by the Loew’s Corporation in 1929 and 1930. The other four movie palaces are Valencia on Jamaica Avenue in Queens, Paradise on the Grand Concourse in the Bronx, Kings Theater on Flatbush Avenue in Bushwick, and the Loew’s Jersey Theater in Journal Square, New Jersey. Each of the "Wonder Theaters" were masterfully designed and built to convey a sense of grandeur in order to give, “the common citizen an affordable escape into Hollywood fantasy and luxurious surroundings." Five “Wonder Morton” organs were also installed in each theater. United Palace is the only one of five venues with its original wonder organ still in place. The New York Theater Organ Society and UPCA began a full renovation of the organ, working to raise $1 million over five years to bring back the “only remaining, consistently used theater organ” in the city.

Over the years, the role of the wonder theaters evolved, and these massive, elegant buildings became community gathering places. For example, in World War II, “people went to their Loew’s to watch newsreels” and to honor mothers of soldiers in gold star ceremonies. By the 1960s, families had moved out to the suburbs, decreasing the local theater-going audience. The advent of the television also made it difficult for the model of the wonder theater to continue – selling out 3,000 tickets to show only one movie at a time on the theater's single screen was no longer practical. From the 1960s to the 1980s, all of the wonder theaters were in serious decline – not helped by the parallel decline of the neighborhoods in which the theaters were located. Most of the Loew’s theaters were turned over to religious organizations in their later years. Religious groups were at an advantage to manage the properties due to their tax-exempt status.

In 1969 the 175th building was sold to “Reverend Ike” (Frederick J. Eikerenkoetter II) who was known for his sermons on “thinkonomics." Reverend’s Ike’s television program debuted in 1973 and became the first such broadcast hosted by an African-American religious leader (2). The United Palace House of Inspiration still operates out of the old 175th St. Theatre, but the building houses other events in addition to the weekly congregation. The United Palace Theatre is an “in-house booking agency” that has helped to put on concerts with big names such as “Neil Young, Iggy Pop, Bob Dylan, Adele and Kraftwerk." The theater also shows films, runs after-school art and performance classes, and produces community events. The management of the United Palace has become a model that some hope to replicate in other former wonder theaters, striking good balance between the various interests of local government, religious groups, and the community.