This structure was constructed from 1909 to 1911 to house the armory of the 22nd Corps of Engineers. The building housed an armory for many decades and was also used as a temporary homeless shelter in the 1980s. The building now houses an indoor running track, the New Balance Track and Field Center, and the Track and Field Hall of Fame. Highlights of the Hall of Fame include a model of the New York City Marathon course and artifacts related to the history of the Olympics. The Fort Washington Avenue Armory was listed in the National Register of Historic Places in 1995 as part of a nomination of multiple Army National Guard Armories in New York State.

Arched entrance into Ft. Washington Ave. Armory in 2014 photo (Beyond My Ken) 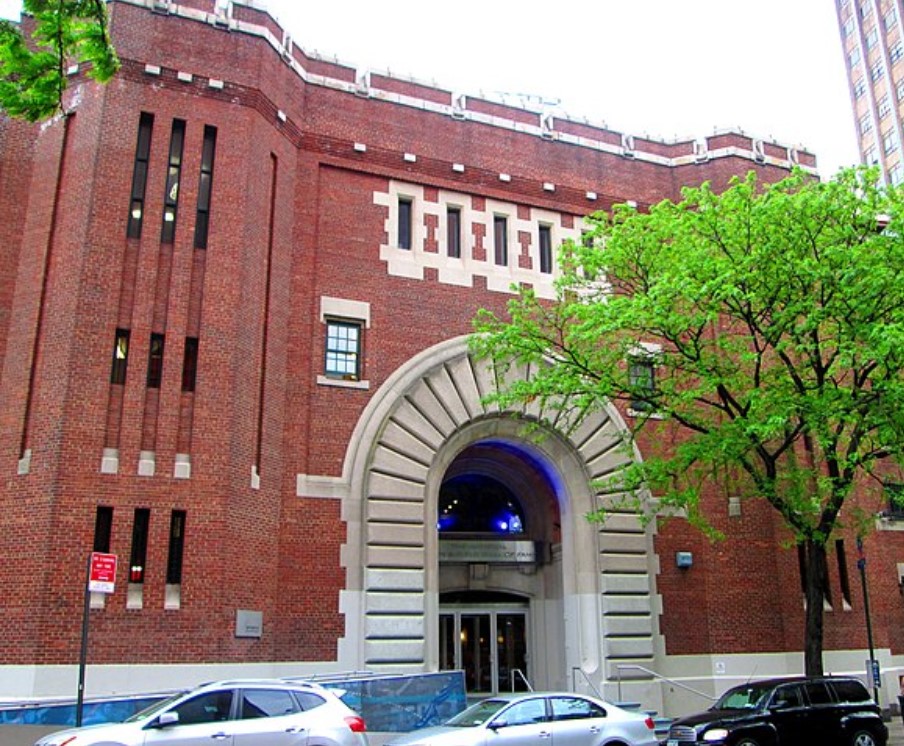 Front door of armory, beyond the arched entryway, in 1986 photo (The Armory Study for NRHP) 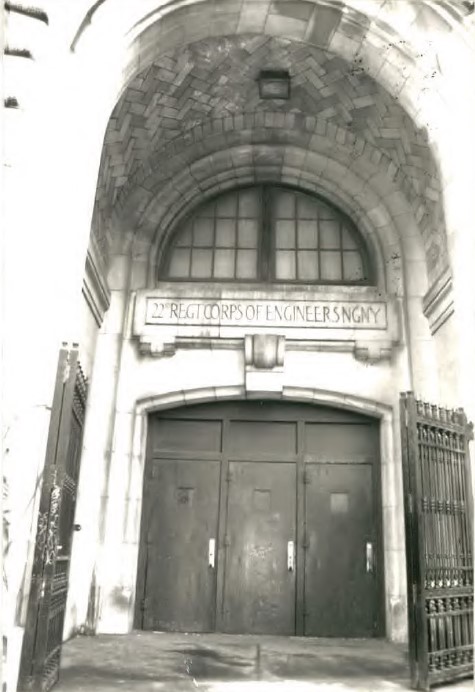 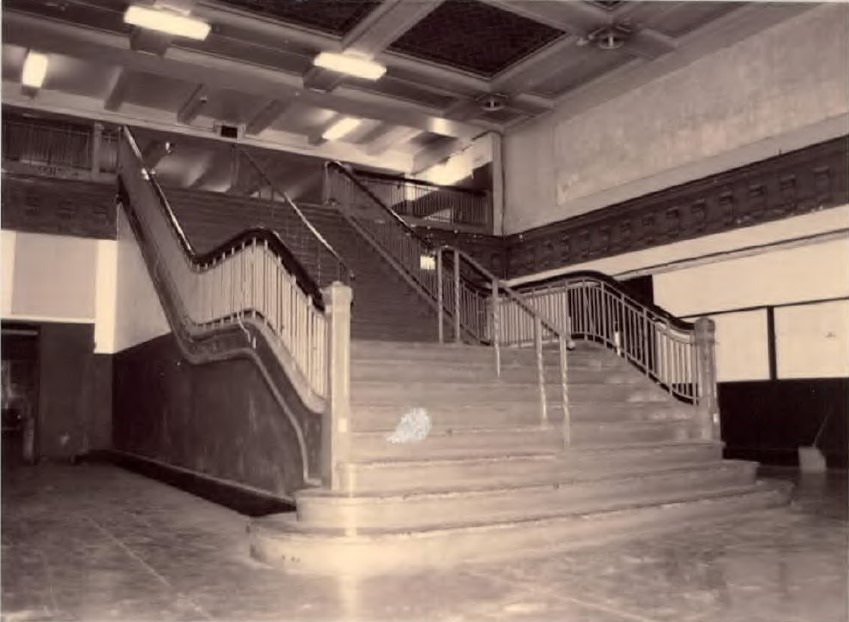 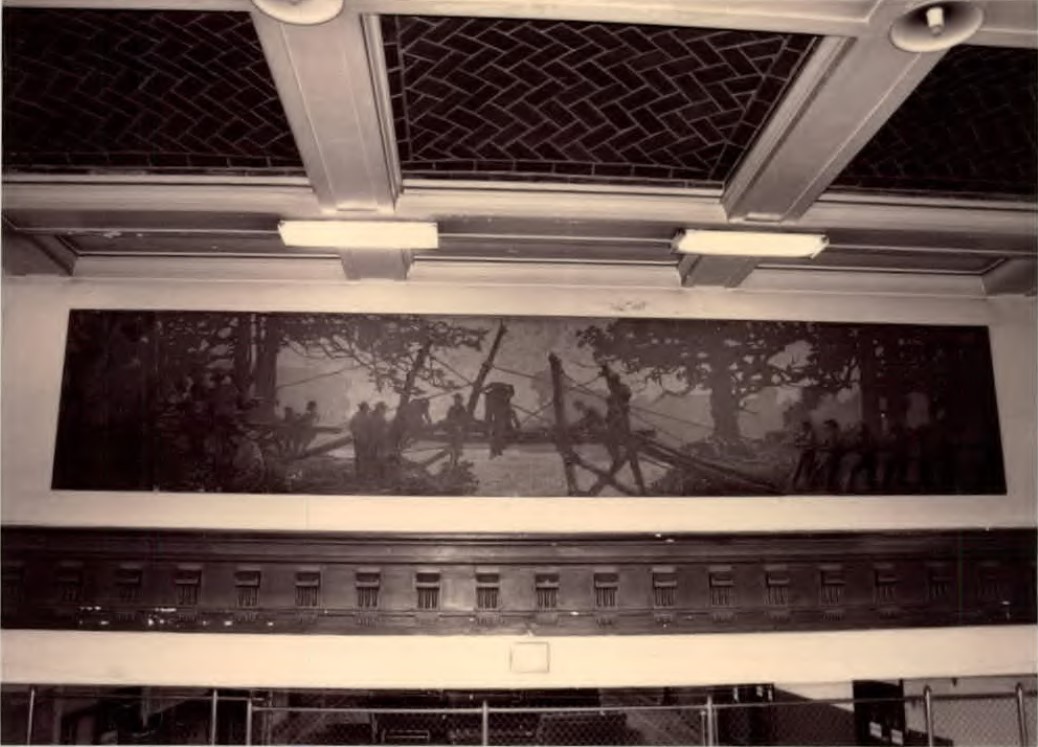 The architectural firm of Richard Walker & Charles Morris designed the Fort Washington Avenue Armory after winning a competition held by the 22nd Regiment of the U.S. Army Corps of Engineers (COE). The 22nd Regiment had moved into a new armory in 1890 at Broadway and 68th Street, but it proved to be too small. The red brick building built from 1909 to 1911 as the new, larger armory has limestone and terra cotta detailing and cost over $1.1 million. The two-story main entrance along Fort Washington Avenue is arched and framed in rusticated limestone; octagonal towers flank the entrance. Inside, the armory included bowling alleys, a swimming pool, and a steam room. A stair hall was decorated with murals painted by Ralph T. Willis showing the Army engineers at work during construction. The main entrance led to Marble Hall, a large, central space with tile floors and a vaulted ceiling. To the north of the Hall was the Colonel's Suite which featured mahogany walls and a limestone surround fireplace. The Board Room was to the south of the Hall, with freestanding columns, a beamed ceiling, and another fireplace. To the rear of the Hall was an open Stair Hall which led to Company Rooms. A memorial to those who died in World War II was on the second-floor hallway, near the Officer's Club. The Drill Hall was lit by clerestory windows and had wood flooring; a balcony on four sides could seat 2,300.

The 22nd Regiment was organized as the "Union Grays" in 1861 to protect New York City after the regular militia units left to fight in the Civil War. It was then the only engineer unit in the organized militia in the U.S. The 22nd Regiment ended up being part of the 102nd Engineering Battalion after World War II and was disbanded in the late twentieth century. Two of their units survive as part of the 369th Regiment and are now attached to an armory in Harlem.

The Fort Washington Avenue Armory was still being used as an active armory when it was documented in 1986. At that time, the building held the only indoor track in the city and was used for high school track and field athletes. The local public and parochial schools used the small gymnasium's basketball courts. The building has been the site of movies such as Requiem for a Heavyweight and commercial shoots. Dog shows and boxing matches have been held in the armory, as well as Shriners conventions.

New York State operated a homeless shelter for a time in the former armory during the 1980s. Over one thousand people were housed in the building, and plans were made to modify the structure. Due to concerns about losing historical integrity, the plans were scrapped. Instead, the armory was repurposed as an indoor track and field facility. The New Balance Track and Field Center claims to have one of the world's fastest tracks. The 60,000-square-foot arena seats 4,000 spectators. The Armory Foundation is a non-profit that promotes fitness and education for youth. The Foundation oversees the track and field facility and hosts over one hundred track meets each year. They manage the National Track and Field Hall of Fame, a museum and interactive sports/ fitness learning center. The Foundation offers college prep and counseling services to some of New York City's high schoolers and middle school students. The SUNY Attain Lab provides workforce and computer skills training for local residents. As of November 2021, all those aged 12 and up need to show proof of vaccination against covid to enter the Armory.

Track and Field Hall of Fame: tours by appointment only