The buff brick building at 15 Old Broadway is the Old Broadway Synagogue, constructed in 1923 for a local Jewish congregation formed in 1911. Immigrants from Russia and Poland made up most of the early congregants and were mainly Ashkenazi Jews. While much of the population of local permanent residents in the congregation has moved out of West Harlem, the Orthodox Jewish synagogue still draws from young people affiliated with local colleges and universities. The original stained glass window above the doorway was replaced with brick for many decades and was restored around 2003. The Old Broadway Synagogue was listed in the New York and National Registers in 2001 and 2002. 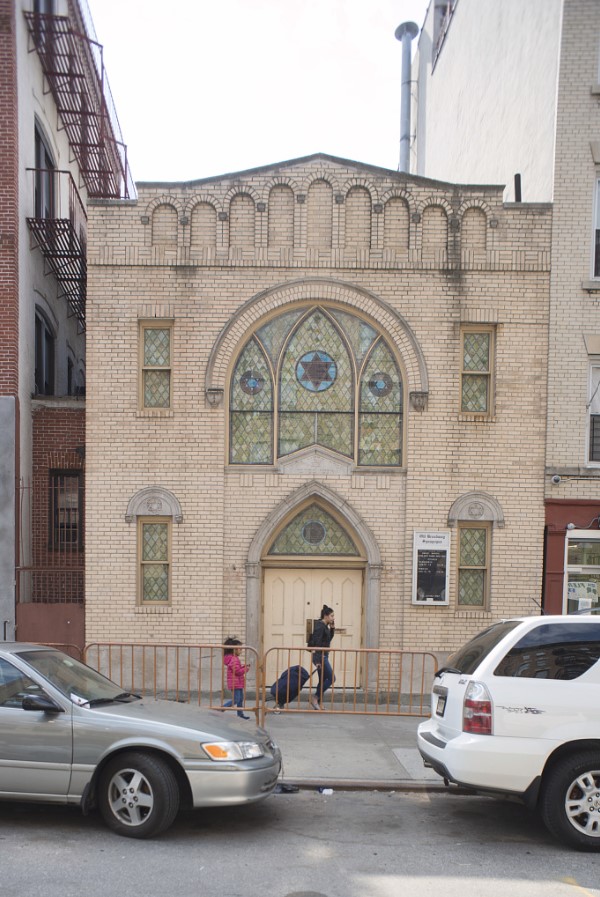 In October 1911, a group of Jewish men in the Manhattanville neighborhood of West Harlem incorporated their newly created minyan as the Chevra Talmud Torah Anshei Marovi, Inc. The original trustees and the signers of the Certificate of Incorporation were Charles Leischer, Osias Fuhrman, Wold Teitelbaum, Isaac Mittleman, Morris Schiff, and Simon Teicher. For the first nine years, the small group of Eastern European immigrants met in rented space in storefronts and a bar. In 1920, the group purchased a two-story house at 15 Old Broadway. They hired the architectural firm Meisner & Uffner to design the new synagogue that was built in this spot.

Old Broadway Synagogue is a two-story plus basement, vernacular building and not based on a particular architectural style. Blueprints show that the structure was originally intended to be three stories; only two were built, probably due to limited funds. Due to vandalism and the deterioration of the framing, the original stained glass window on the front of the building was removed in the 1960s and the arched space was bricked up for many decades. Using old photos and the remaining stained glass in the transom above the doorway as a guide, the stained glass windows were recreated. A grant from the New York Landmarks Conservancy was awarded to the synagogue for the windows in 2001. Other parts of the building have been renovated off and on since the late 1990s, including a new roof and restoration of skylights.

The Principal Rabbi at Old Broadway Synagogue in the 1940s was Shepard Brode. Old Broadway Synagogue offered a Hebrew School (Talmud Torah) until the 1960s or 1970s. Rabbi Jacob Kret, a native of northern Poland, was the head of Old Broadway Synagogue from 1950 until his retirement in 1997. During World War II, Rabbi Kret fled to Lithuania; he was later sent by the Soviet occupiers of Lithuania to a labor camp in Siberia. He and his family emigrated to the U.S. in 1950. In the 1950s, many Holocaust survivors arrived in the area and the congregation grew. Rabbi Kret also served as a Talmud tutor at the Jewish Theological Seminary nearby; seminary students and other local college students worshiped at Old Broadway. He passed away at age 97 in 2007.

Old Broadway Synagogue, also sometimes called the Manhattanville Jewish Center, had a congregation of 70 at the time of its 100th anniversary in 2011. The synagogue reopened after the pandemic-related closure in October 2020.

Rangel, Charles B. In Celebration of the Old Broadway Synagogue's 100th Anniversary, Speech in the U.S. House of Representatives. Congressional Record. Extensions of Remarks.. November 7th 2011. 16844 - 16844.