One side of the "Indian Land Dancing" mural, picture taken from opposite side of the underpass. Photo Credit: Jim Bartholomew, 2010. 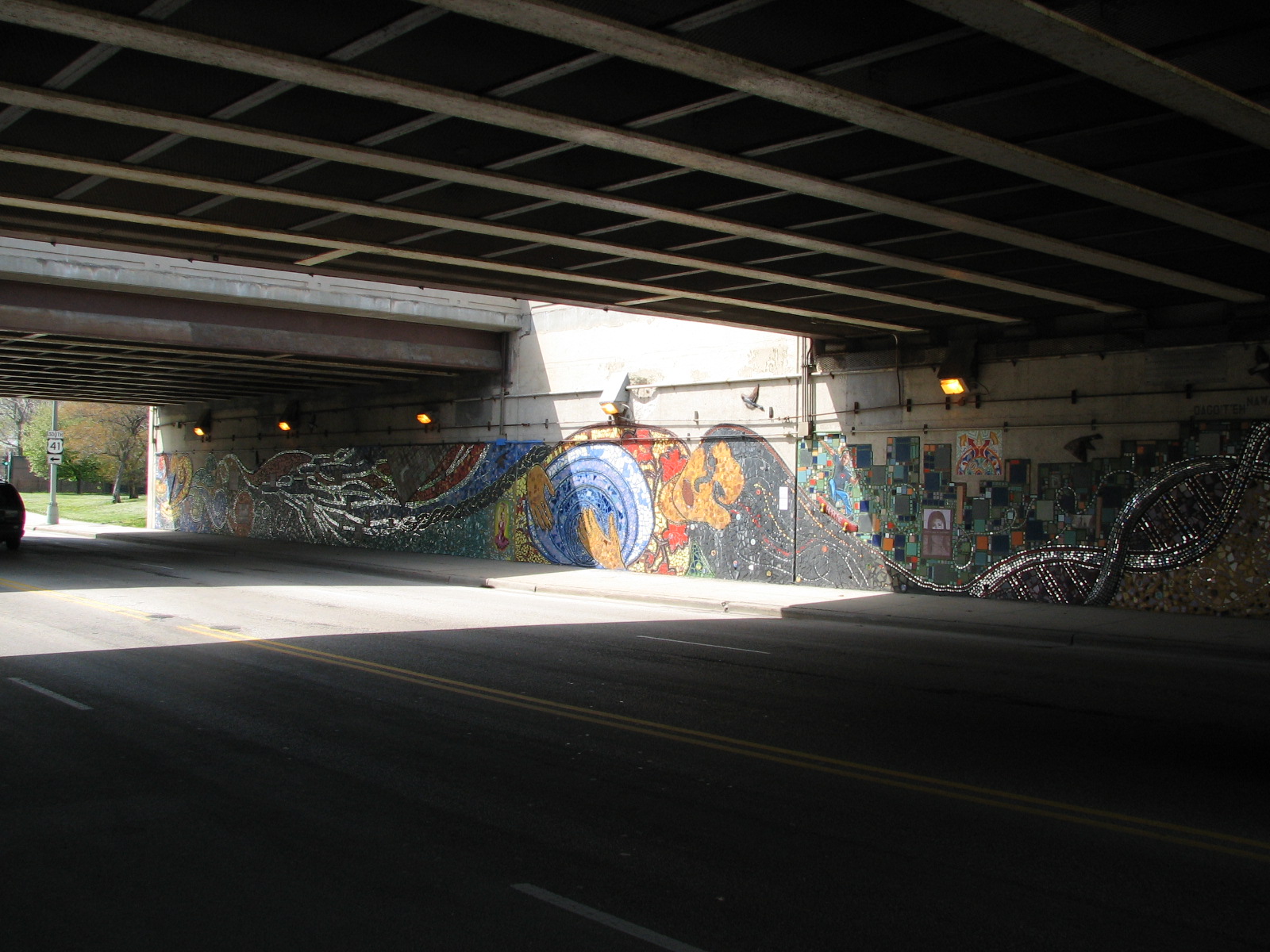 Close up of some of the detail of the mural, waterfowl taking flight. Photo Credit: Jim Bartholomew, 2010. 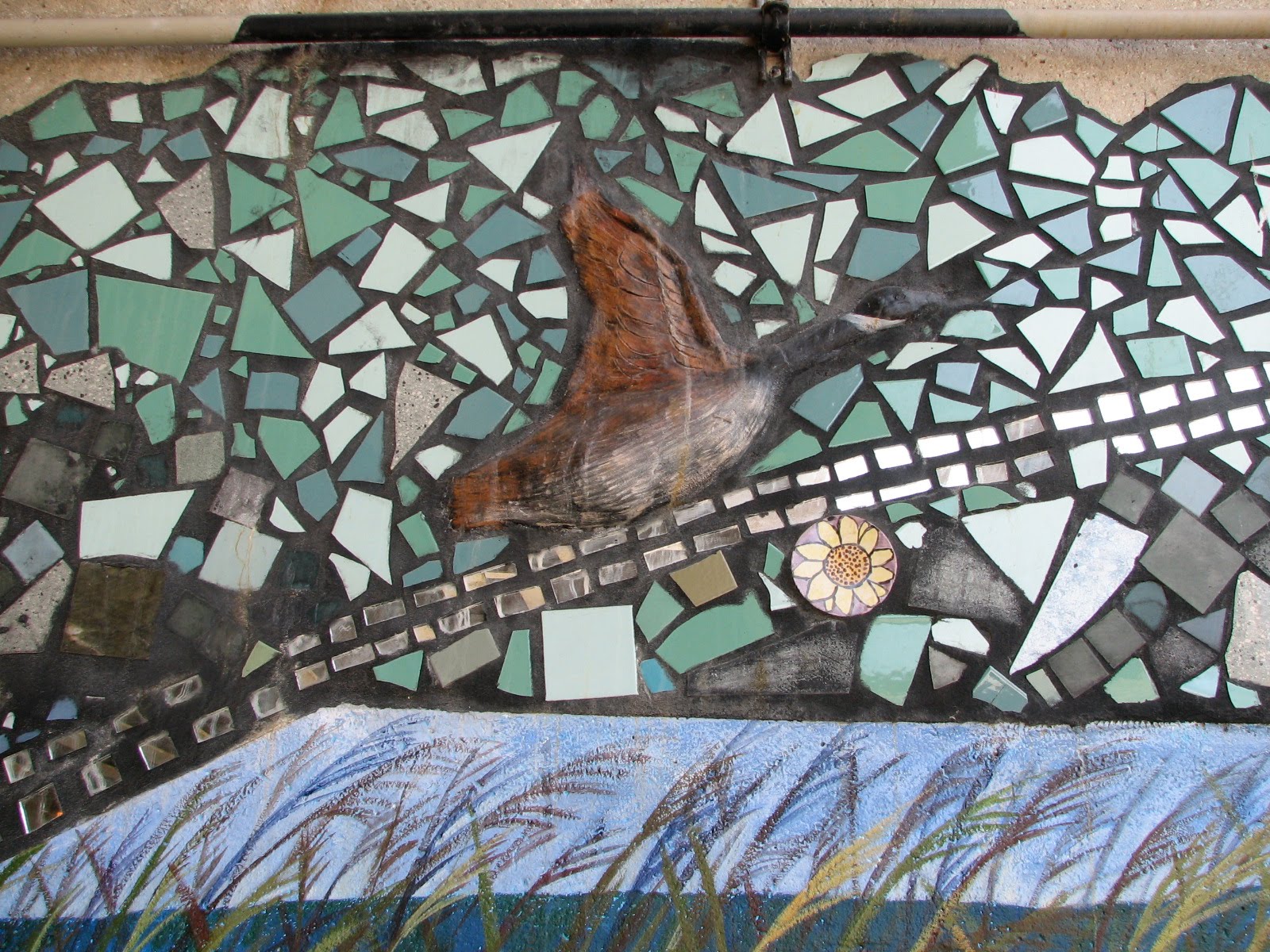 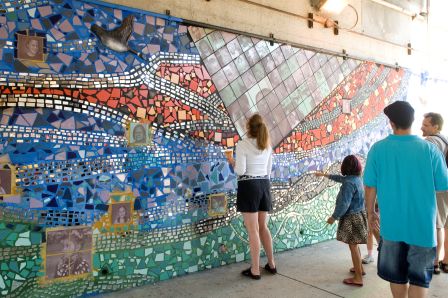 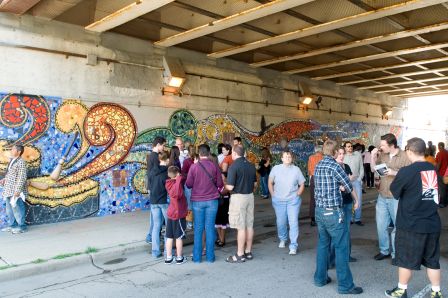 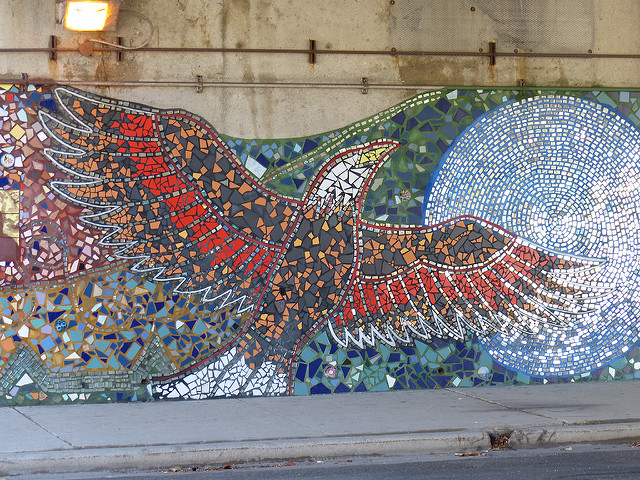 The image of the tipi standing next to the stack of books is meant to represent the local native tribes transition from oral to written forms of storytelling, according to artist Robert Wapahi. Photo Credit: Steve Silverman, 2012. 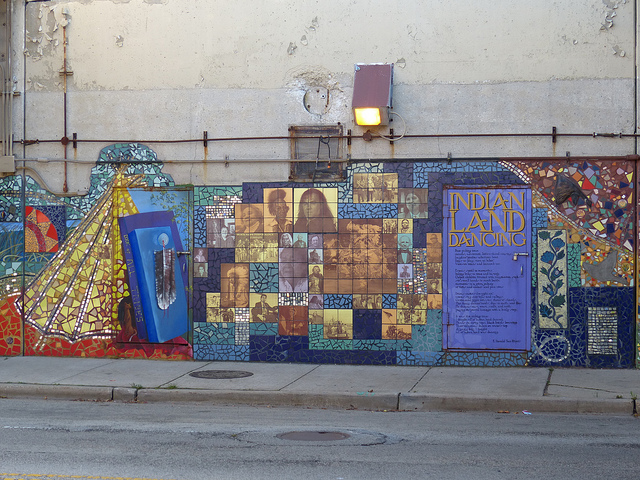 Close up of detail work on mural, highlighting the variety of mixed-media used in the mural. Photo Credit Steve Silverman, 2012. 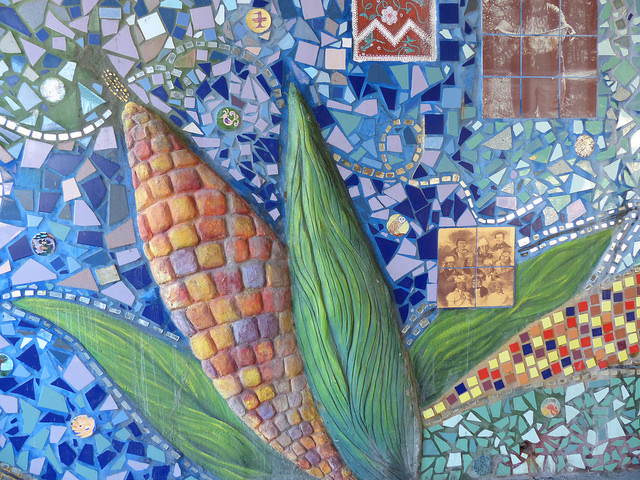 Since 1971, the Chicago Public Art Group (CPAG) has created, or helped to create, hundreds of pieces of public artwork in a variety of locations across the city of Chicago. The art installations by CPAG are completed with several goals in mind, notably “to unite artists and communities in partnership to produce quality public art and to extend and transform the traditions of collaborative community involved, public artwork”2. “Indian Land Dancing” is one of several underpass beautifying projects that CPAG undertook during the latter portion of the 2000’s.

Alderman Mary Ann Smith, of the 48th Ward, was one of the driving forces behind the development of this project5. She was inspired to begin this project after viewing Native American art on a trip to Alaska. After being inspired by the artwork she saw on her trip, she wanted to find a way to bring the art of Great Lakes Native Americans into focus in Chicago, like she had seen done in Alaska5. At the time that Alderman Smith contacted the people at CPAG to discuss the creation of a piece of public art focused on Great Lakes Native American in Chicago, they were already considering creating a mural at the Foster Avenue underpass, due to the relative success of the Bryn Mawr Avenue underpass mural situated a few blocks north8. After this the Foster Avenue project took on a new life and CPAG began to collaborate with Native American artists, scholars, and community members from the Chicago area on the planning and design of the mural. Alderman Smith and her staff were in contact with CPAG throughout the development and planning of the mural and helped, in part, to fund the mural by contributing around $100,000 from funds that were set aside for beautifying the community 5,8.

The “Indian Land Dancing” mural represents the culmination of many months of collaborative work and discussions. CPAG project leaders Tracy VanDuinen, Todd Osborne, and Cynthia Weiss reached out to Native American artists, scholars, activists, and community members in Chicago to discuss the design, direction, and artistic aspects of the mural8. In addition to involving individuals, the CPAG planning committee was in contact with the American Indian Center, located in Chicago, and Evanston Illinois’ Mitchell Museum of the American Indian to help bring in even more Native scholars and artists from the Great Lakes region to make sure that the project would be accurate and representative for all of those who chose to contribute5.

During the physical creation and application of the mural even more people contributed their time and effort to create the mural. Many of the people involved in the planning stages came out to help paint, sculpt, and guide others during the creation of the mural8. Local community members donated ceramic tiles and other supplies and volunteered to help apply sections of the mural1. In addition, youth volunteers from two different afterschool youth programs, Alternatives, Inc. and the After School Matters Program of Chicago, also helped to apply ceramic tiles to the mural6.

Inspiration and Message Behind the Mural

The inspiration behind the Foster Avenue mural comes from a poem by Ojibwe artist E. Donald “Eddy” Two-Rivers, from which the title “Indian Land Dancing” is borrowed6. Images from this poem are spread throughout the mural. The mural is meant to “teach the Native past, rather than simply putting it on display" said artist Tracy VanDuinen5.

The mural mixes the traditional symbols of Native American groups from the Great Lakes region with ones meant to represent contemporary Native American life in the city of Chicago. One portion of the mural depicts a matriarchal figure holding “a sphere of seven circles” while a skateboarder with the word “Apache” on his board rides on the slope of her hair1. This image references the Native American belief that all generations are interconnected, represented by the womanly figure holing the sphere of interconnected circles, while also highlighting a member of the current generation1.  Another portion of the mural depicts a tipi with books stacked up against it (pictured). This image created by Robert Wapahi is meant to symbolize the local tribes transition from oral storytelling, represented by the tipi a location where oral storytelling would have taken place, to written storytelling, represented by the stack of books 6.

There are  many other images meant to represent the past lives of Native American people in Chicago, like the cattails meant to represent Lake Michigan’s shoreline prior to contact6. There are images a mythical thunderbird and great turtle, both important elements in the religious beliefs of Native American groups from the Great Lakes region8. The mural also includes images of important Native American leaders and individuals from the past, like the Sauk Warrior Black Hawk and Leopold and Simon Pokagon of the Pokagon Potawatomi, as well as images from far more recent times, like the Mohawk Ironworkers who helped build the skyscrapers and world renown ballerina Maria Tallchief8. A final unique artistic element of the mural is the inclusion of “blank” mirror tiles throughout the mural, these tiles allow for the visitors to connect to the images of the mural on a deeper level, and help the visitor to see themselves as being connected to the stories and history presented in the mural in some way6.

The location of the mural itself blend this combination of past and present. In the past long before Chicago was the Chicago we know today, streets like Rodgers Avenue and Broadway were all former Indian trails, many of which ran through the area that is now occupied by the Foster Avenue underpass, according to Frances Hageman, Vice President of the American Indian Center's board5.

At the time of its construction in 2009, the Foster Avenue mural claimed two unique identifiers. The size of the mural, covering nearly 3,400 square feet, and the application style, made it the largest direct-application mosaic in the city of Chicago 1,4. The group of collaborators and artists who helped to design and create the mural, helped give the mural its other unique identifier, that the mural was the only public art piece designed, at least in part, by Native Americans, as of 2009 1,4.