Birthplace of the Ford Automobile

At this location beginning in 1892, Henry Ford began experimenting with and producing a simple automobile with a two-cylinder engine, which was essentially mounted on a frame and geared to bicycle wheels. Ford would go on to create one of the most influential automobile manufacturing companies in the world. In the early 1900s, Ford Motor Company led the world in automobile production. Built with Ford’s own hands at this location, the “Ford Quadricycle” began the future industrialists career as an automobile manufacturer. In 1896 at the age of 32, Ford sold his first car for $200 (equivalent to about $5,400 today). He built two new models in 1899 and 1901. Although seen as a toy for the rich at the time, the Quadricycle inspired Ford to continue innovating and eventually start his own company, which ultimately resulted in the founding of the Ford Motor Company in 1903. His Bagley Avenue workshop was reconstructed at Greenfield Village, where it remains today.

Henry Ford sitting atop is Quardricycle in 1896 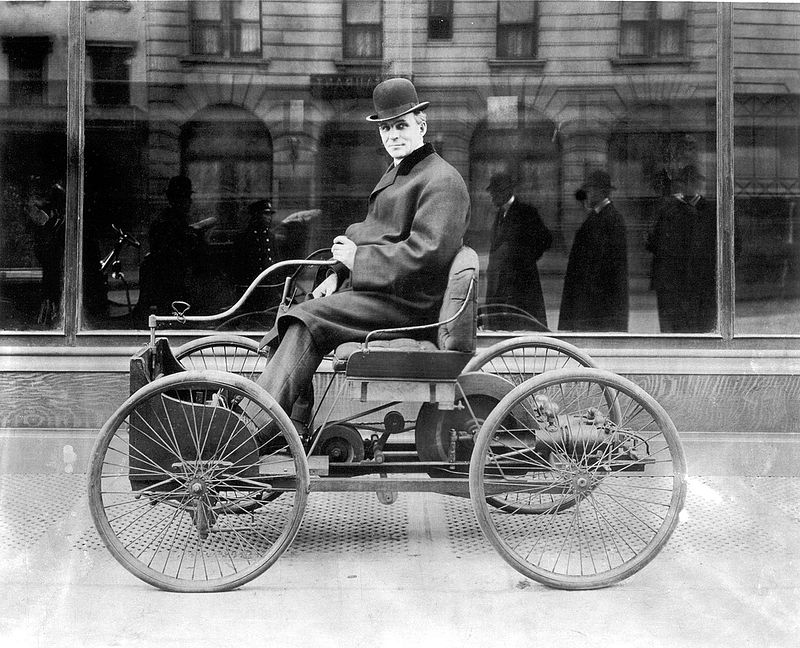 Henry Ford in 1919. Because of his perseverance and innovation that began at this location, Ford would revolutionize industry practices and build one of the largest automobile manufacturing companies in the world. 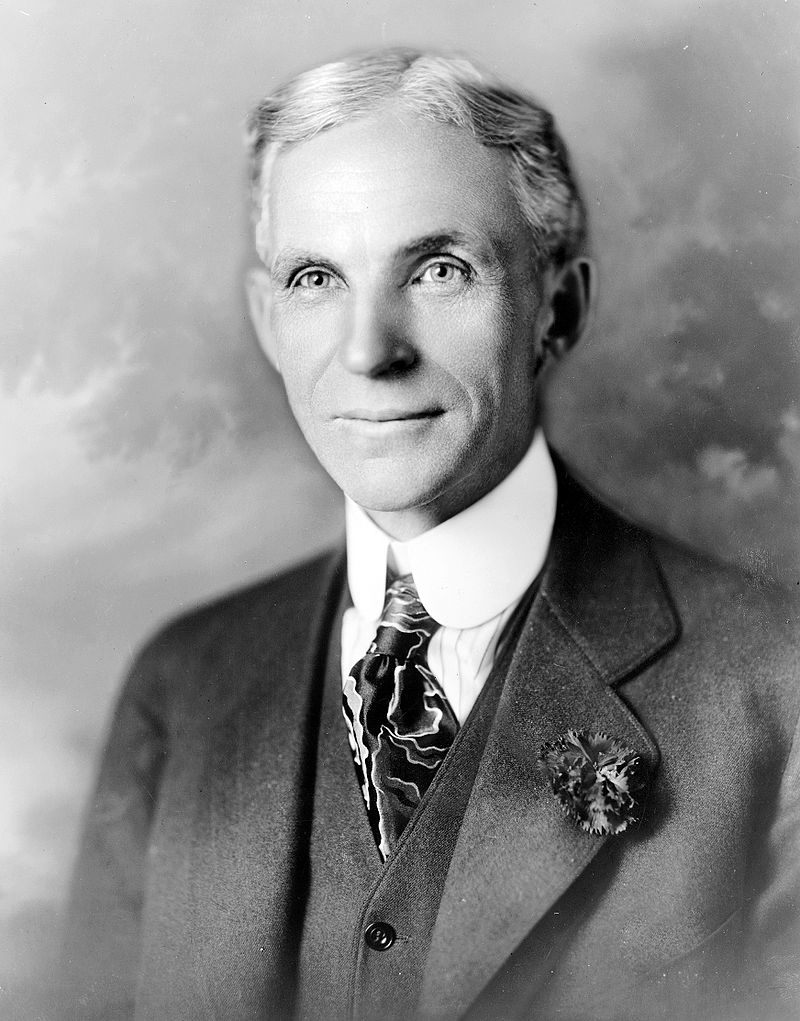 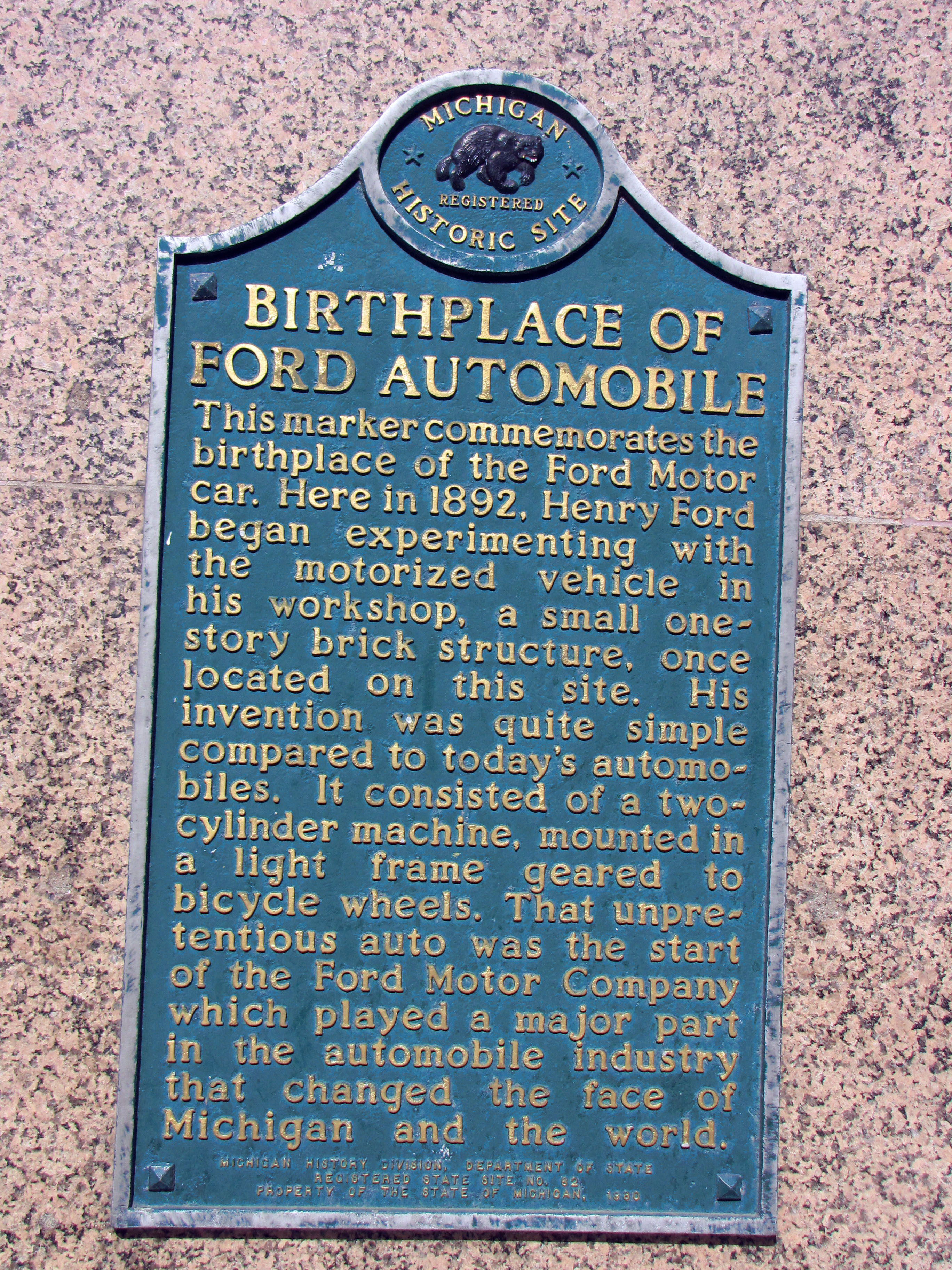 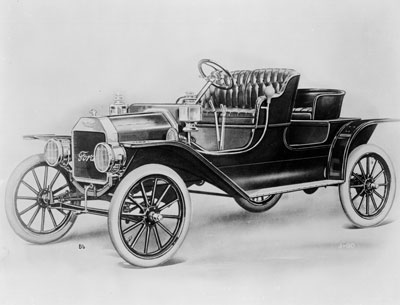 Ford's workshop was recreated from bricks of Ford's residence on Bagley Ave and assembled at Greenfield Village, where it remains today 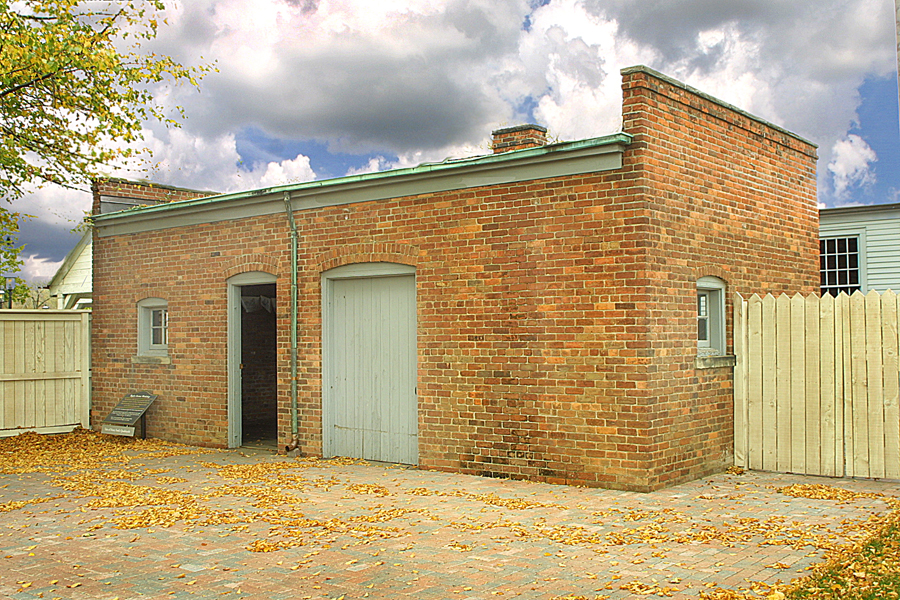 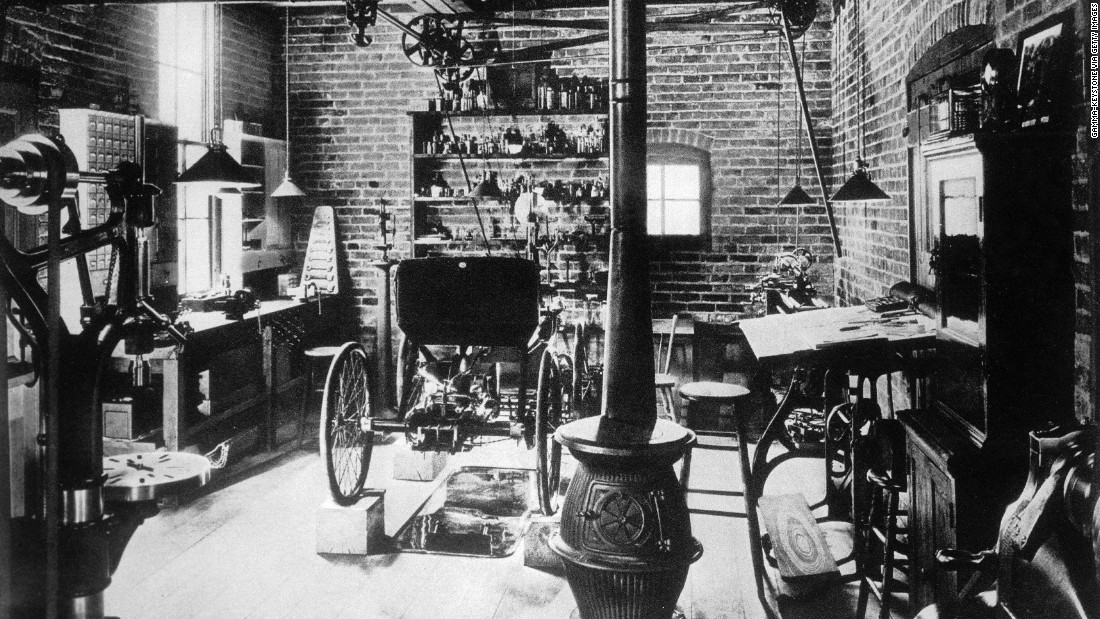 Ford's Bagley Ave workshop at Greenfield Village today. The hole represents how Ford had to dismantle the brick wall in order to get his Quadricycle out of the workshop. 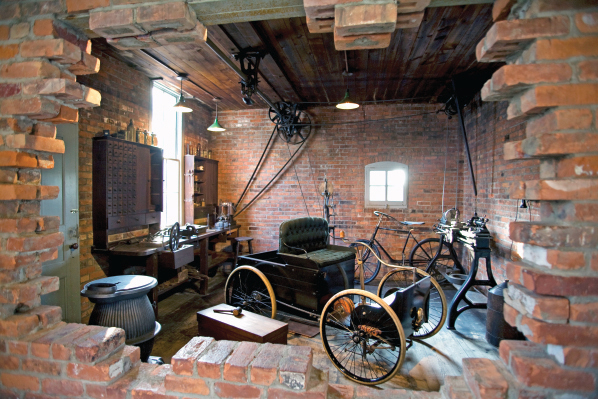 Brief History of the Automobile

It is important to note that Henry Ford was not the “inventor” of the automobile, though his contributions to automobile production paved the way for mass ownership amongst the middle class while changing the way Americans, as well as the rest of the world, considered the role of the automobile in everyday life. Nevertheless, the first automobile dates back to 17th-century China, when Ferdinand Verbiest built a steam-powered vehicle in 1672 for the emperor of China. This vehicle, however, was too small to carry passengers. Steam-powered, self-propelled vehicles that could carry passengers were unveiled around 1770 with Nicolas-Joseph Cugnot’s “steam wagon.” In 1784, William Murdoch built a steam carriage, and the first automobile patent in America was given to Oliver Evans in 1789 for his steam-powered carriages.

By the 19th-century, automobiles were in vogue, and quite expensive. Nonetheless, it was during the first few decades of the 19th-century that automobiles were given hand brakes, more effective steering, and multi-speed transmissions. Despite many innovations from the UK, France, Canada, and the US, the first “real” automobile, which was designed to transport groups of passengers, was credited to Amédée Bollée in 1873; however, toward the end of the 19-century, inventions such as internal combustion and four-stroke diesel engines made their appearances, while industry leaders such as Karl Benz and George B. Selden helped give rise to the fledgling automobile industry.1

History of the Ford Motor Company

The history of the Ford Motor Company begins with the birth and childhood of Henry Ford. He was born on the family farm outside of Dearborn, Michigan in 1863, and by his teenage years, young Ford had already developed a respectable reputation as a watch repairman. Despite his success, Ford did not feel at home on the family farm, and in 1879, he left the farm to become a machinist in Detroit. After working with several companies in different roles, including machinist, steam engine mechanic, and bookkeeping, Ford became an engineer with the Edison Illuminating Company in 1891. Two years later, Ford was promoted to the Chief Engineer position, giving him the spare time and money needed to experiment with gasoline engines in a workshop behind his house at 58 Bagley (Due to a massive street renumbering project in Detroit in 1920-1921, the current address of Ford’s first workshop is 220 Bagley Avenue).

After years of experimenting in his private workshop, Ford unveiled the “Ford Quadricycle” in 1896. Unlike other inventors at the time, Ford sought financing for his vehicle, and sold it for $200 that same year. This vehicle included four bicycle wheels, a four-horsepower engine, a tiller instead of a steering wheel, and a gearbox with only two forward gears (no reverse). Partly due to the Quadricycle, Ford joined the Detroit Automobile Company in 1899, though he left less than a year later. In 1901, he successfully designed a 26-horsepower vehicle, titled the “Sweepstakes,” which beat Alexander Winton’s 70-horsepower vehicle, the “Bullet,” during 10 laps at the Detroit Driving Club. This success thereafter led Ford and some of his backers to create the Henry Ford Company (Ford also left this company within a year; thereafter, it changed its name to the Cadillac Automobile Company).

In 1908, Ford developed the Model T, which included the first engine with a removable cylinder head. Between 1908 and 1927, the Ford Motor Company sold over 15 million Model Ts, making it one of the most popular cars in the world. In 1913, Ford introduced the integrated moving assembly line, and along with many other contributions throughout the 20th-century, Ford helped grow his company into the one of the most successful automobile manufacturers.

Ford would later buy his Quadricycle as a keepsake for $60. It is now housed at the Henry Ford Museum in Dearborn while his Bagley Avenue workshop was reconstructed at Greenfield Village.2

This marker commemorates the birthplace of the Ford Motor car. Here in 1892, Henry Ford began experimenting with the motorized vehicle in his workshop, a small one-story brick structure, once located on this site. His invention was quite simple compared to today’s automobiles. It consisted of a two-cylinder machine, mounted on a light frame geared to bicycle wheels. That unpretentious auto was the start of the Ford Motor Company which played a major part in the automobile industry that changed the face of Michigan and the world.3