The basement of the building on the corner of Liberty Avenue and Strawberry Way was once the Pegasus Lounge, one of the most popular gay clubs in the city of Pittsburgh. Opened in June of 1980, the Pegasus Lounge was a fixture of gay life in the downtown neighborhood until its move to the North Side neighborhood in 2009. Owned and operated by David Morrow until 2005 and then Scott Noxon afterward, the Pegasus Lounge hosted leading drag queen performers like Chi Chi LaRue, Tiffany Jones, and Divine as well as Hollywood notables like Kathleen Turner. The Pegasus Lounge is most notable, however, for its many services to the gay community over the years, particularly its activism in fighting AIDS and providing a safe space for young gay men. Pegasus Lounge closed for good in 2012 and its former home on Liberty Avenue is currently vacant.

The 800 block of Liberty Avenue in 2012, former home of the Pegasus Lounge. 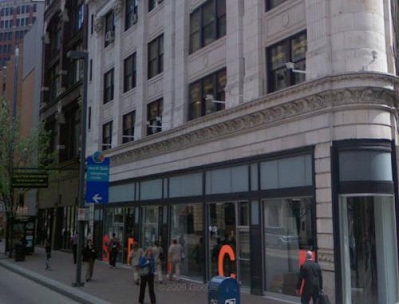 Undated photo of the inside of the Pegasus Lounge. 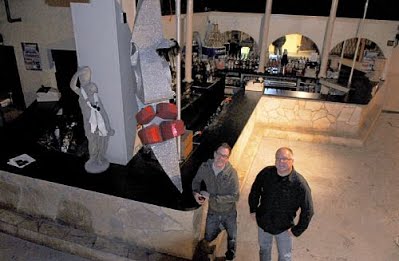 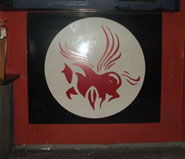 Sketch of the Liberty Theater from 1913. 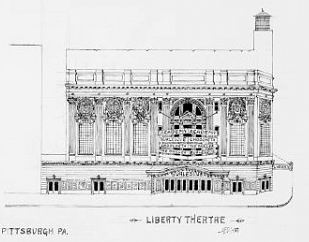 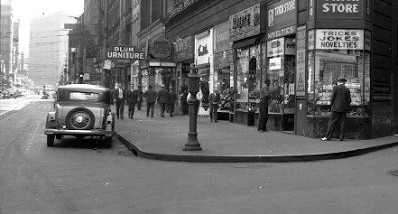 The building on the corner of Liberty Avenue and Strawberry Way that once housed the Pegasus Lounge has a long and storied past as an entertainment venue. Opened in 1913 as the Liberty Theater John Harris, the building included a 1,400-seat vaudeville showcase. Due to competition from the larger Penn Theater the Liberty Theater closed in the 1920s, became offices and stores, and was renamed the Baum Building. During this period a cafeteria operated out of the basement that would eventually become the Pegasus Lounge. Before the Pegasus came along, however, the basement played host to a number of other nightclubs. Lyricist and music publisher Joe Hiller opened the Music Box in the basement of 818 Liberty Avenue in 1934, booking performers like Dora Maughan, Buddy Kountz, and Eddie Loughton until the St. Patrick’s Day Flood of 1936 carried away the club’s piano and furniture. Five years later, band leader Etzi Covato opened the Villa Madrid and operated it until 1948 when he sold it to music promoter Lenny Litman and it became the Copa. The Copa ran headliners like Mel Torme, Duke Ellington, Conway Twitty, Rudy Vallee, Bela Lugosi, and Miles Davis before closing in 1959. The Del Monaco’s and the Tammys played the venue when it became the Pin Up Lounge in the 1960s and the Jaggerz, Skyliners, and Rock Garden headlined when Dolores and Henry Demase ran it as the Staircase Lounge from 1967 to 1980.

David Morrow opened the Pegasus Lounge in June 1980 after the Staircase’s closure earlier that year. The club soon became a centerpiece of Pittsburgh’s gay community. When it opened the Pegasus was among the most cosmopolitan sites for gay patrons in the Pittsburgh area, hosting a piano and cocktail lounge on the upper level and a dance floor down below. It went through a number of cosmetic changes in terms of décor over the years, but what was always a staple was the trademark black and red sign over the door of a winged horse advertising the club’s existence. After passing under that sign, club patrons had the opportunity to participate in a variety of events from Halloween and New Year’s Eve celebrations and fundraisers to singing acts and drag shows. Indeed, many famous drag queens performed at the Pegasus over the years, including director Chi Chi LaRue, Houston-native Tiffany Jones, and John Waters associate Divine. Actress Kathleen Turner also frequented the club during her time headlining a play in Pittsburgh titled Tallulah.

The Pegasus is also notable for its socially conscious role within the gay community of Pittsburgh. Owner David Morrow felt particularly responsible for providing a safe space for young gay men, constructing a fence down the middle of the club separating an under 21 area serving juice and soda from an over 21 area serving alcohol. This was particularly important within the context of the rising AIDS epidemic of the 1980s, to which the Pegasus took a lead role in responding. In partnership with medical researcher Dr. Charles Rinaldo out of the University of Pittsburgh, LGBT+ mental health organization Persad, and the Gay and Lesbian Community Center, the Pegasus and other gay clubs in the Pittsburgh area worked to recruit its customers as volunteers for a study in search of a cure for AIDS. Impressed by the success of Rinaldo’s study, the National Institute of Health later awarded him a $4.36 million grant to continue. The Pegasus also provided its staff and patrons with sexual health training and educational materials and was also the site where the Pittsburgh AIDS Task Force was formed in 1985.

Because of its role as a haven for young gay men and as an early responder to the AIDS crisis, the former site of the Pegasus represents a unique landmark within the history of Pittsburgh’s gay community. Generations of gay men found themselves and their place within the community over the thirty plus years of its existence. The club opened in an era when gay men routinely lost their lives and livelihoods for publicly expressing their sexuality. Within the walls of the Pegasus, they were able to find acceptance and belonging. The lounge also provided them with a connection to their culture, a sense of community that stretched back in time and across the country. Because of the Pegasus Lounge and other venues like it, the gay community of Pittsburgh was able to face everyday bigotry and the unprecedented upheaval of the AIDS crisis together. As a result, the community was able to continue fighting for mainstream acceptance as the twentieth century became the twenty-first.

When the Pegasus Lounge closed its downtown location and moved to North Side in 2009, owner Scott Noxon identified that acceptance as a primary reason for the downturn in club business. With more and more venues welcoming gay patrons and the internet providing a place for gay men to connect with one another, he argued, the demand for exclusive spaces for gay men was decreasing. Others believed it stemmed from the Pittsburgh Cultural Trust’s assumption of the building’s ownership in 2003, after which the Trust forced the lounge to remove its trademark sign and replaced the adult bookstore above it with the Space art gallery. Regardless, the Pegasus unfortunately remained in operation only three years more after its move to North Side. In 2012, Noxon closed the venue for good citing similar reasons to those he identified in 2009. The former site of the Pegasus Lounge from 1980 to 2009 remains vacant, but passersby can still view it from the outside and appreciate its unique role in the history of Pittsburgh’s gay community.

Srikameswaran, Anita. "Pitt Men's Study Put Our City on the Map in the Battle against AIDS." Pittsburgh Post Gazette May 23rd 1999. G1.