This site was the start location for a demonstration against architectural barriers to people with disabilities that featured twenty protesters in wheelchairs making their way down Liberty Avenue to Market Square on sidewalks lacking curb cuts and ramps. The protest, which took place on May 4, 1990, was a response to downtown Pittsburgh’s lack of accessibility after a decade plus of advocacy to remove architectural barriers in the city’s other neighborhoods. The United Cerebral Palsy of Pittsburgh Association and Three Rivers Center for Independent Living organized the protest to coincide with “Barrier Awareness Week” in May, a commemoration highlighting barriers to independent living among people with disabilities. Shortly after the protest Congressional leaders passed the Americans with Disabilities Act mandating among other things that public spaces maintain certain accessibility standards, a stipulation that gave local activists in areas like Pittsburgh further grounds for enforcing the removal of architectural barriers. As a result, the sidewalks along which the protesters traveled on May 4, 1990 are accessible to anyone seeking to follow their route. 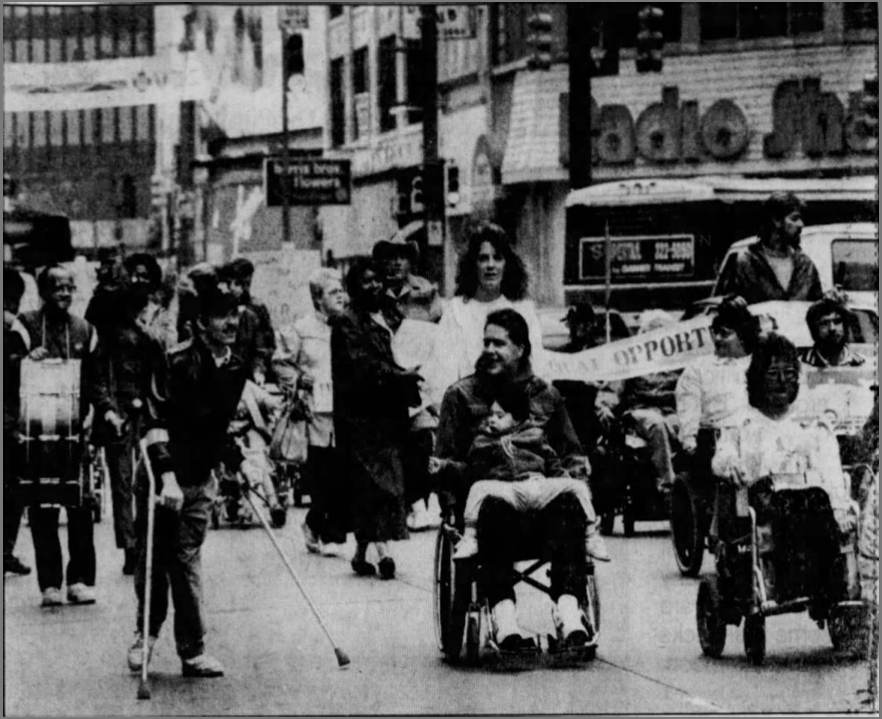 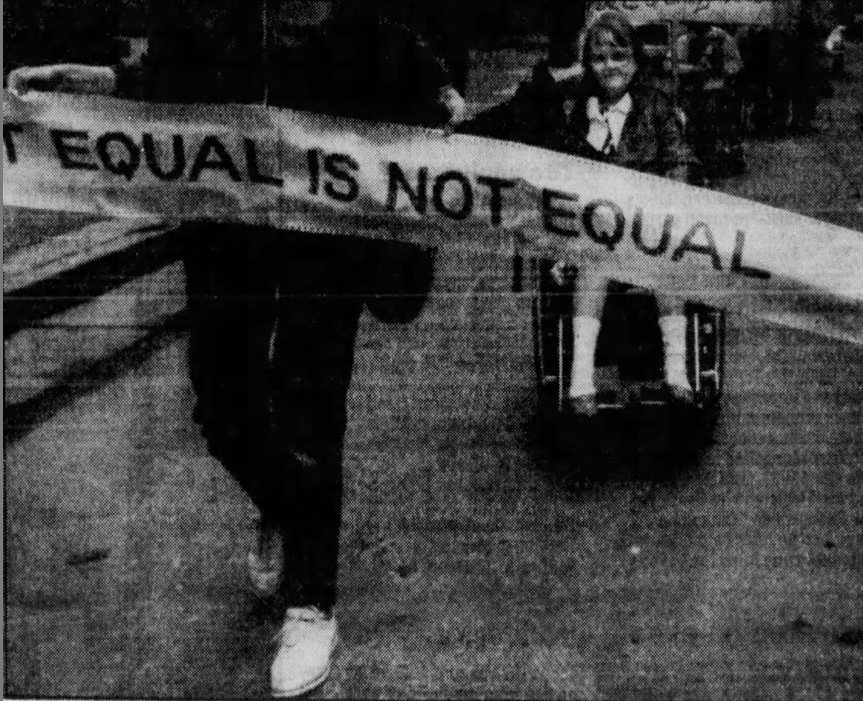 The impetus behind the disability rights movement of the twentieth century that led to the protest on Liberty Avenue in 1990 can be found in the civil rights advances of African Americans and other groups in the 1950s and 1960s. Prior to this era much of the public discourse surrounding people with disabilities in the United States focused on charity and institutionalization, exclusionary concepts that impacted their social, political, and economic agency. With the rise of the civil rights movements of the mid-twentieth century, however, disability rights advocates began increasingly to fight for policies that emphasized independent living, a philosophy that centers people with disabilities as experts on their own needs in terms of freedom, control, and self-determination. As a result, centers for independent living appeared across the United States (the first in Berkeley, California in 1972), peer support organizations run by people with disabilities that in many areas became the focal point of local disability rights advocacy. This nationwide network of advocates helped push through legislation critical for enabling independent living among Americans with disabilities. One of the most important of these pieces of legislation was the Architectural Barriers Act of 1968, which enforced uniform accessibility standards for buildings in terms of design, construction, and alteration.

The provisions of the Architectural Barriers Act were not enforced in Pittsburgh for another decade. It was not until the mayorship of Richard Caliguiri, who initiated the “Renaissance II” program of urban renewal, that city leaders began investigating how they might make their home more accessible to residents with disabilities. Caliguiri formed the Committee on Architectural Barriers in 1978, his second year in office, to assess the accessibility of public and private buildings across the Pittsburgh area. He also obtained federal grant money under the Architectural Barriers Act to upgrade municipal and public buildings like the Carnegie Museum, Buhl Planetarium, the City-County Building, and Allegheny County Courthouse. As Committee on Architectural Barriers members like Ruth Brenyo (founder of Open Doors for the Handicapped) made clear, however, the major roadblock to improving accessibility in Pittsburgh were privately-owned facilities, not public ones. As a result, architectural barriers in Pittsburgh came down slowly and with considerable delays. By the end of Caliguiri’s time as mayor in 1988, much of downtown Pittsburgh remained inaccessible to its residents with disabilities. While neighborhoods like Oakland and Southside received curb cuts and sidewalk ramps through federal grant money administered by the Committee on Architectural Barriers in tandem with funding from private owners, many private owners and businesses in downtown continued to refuse to cooperate with accessibility standards.

It was in response to these delays that the United Cerebral Palsy of Pittsburgh Association and Three Rivers Center for Independent Living organized their protest on Liberty Avenue on May 4, 1990. During the protest, twenty individuals in wheelchairs made their way from the Federal Building on Liberty Avenue to Market Square. According to comedian, actor, and Pittsburgh-native Don Brockett (Chef Brockett on Mister Rogers’ Neighborhood), who participated in the protest, Liberty Avenue was specifically chosen because some of its intersections had curb cuts on one side of the street and not on the other. Passersby watched as protesters navigated the difficult transition from one side of the street to the other, a movement that emphasized the inequitable accessibility standards of the neighborhood. U.S. Representative Doug Walgren was also on-site to make that message hit home, telling onlookers that “those who happen to be able-bodied are only temporarily able-bodied, and many of them will face the same kinds of difficulties some time in their life.” Disability rights were, in Walgren’s estimation then, not only a matter of individual access but community good.

When speaking with reporters, the executive director of the Three Rivers Center for Independent Living Bill Chrisner, emphasized that the coming vote on the Americans with Disabilities Act was the key to protecting disability rights and ensuring that accessibility standards were met in areas like Pittsburgh. That bill, which eventually passed on July 26 of that year, was the most sweeping disability rights legislation of the twentieth century. Not only did it prohibit discrimination on the basis of disability and force employers to provide reasonable accommodations to workers with disabilities, it also imposed accessibility standards on commercial properties in addition to public buildings. A protest by disability advocates in March known as the Capitol Crawl (in which protestors with disabilities abandoned assistive devices and crawled up the one hundred steps to the U.S. Capitol) was a pivotal moment in pressuring Congress to push the ADA through into law. Similarly, the May protest on Liberty Avenue in Pittsburgh called attention to the barriers standing between people with disabilities and independent living. With the help of the ADA, disability advocates were able to bring new pressures to bear on the private owners of buildings in downtown Pittsburgh. As a result, by the time Mayor Thomas Murphy appointed a new task force to assess accessibility in the city in 1995, significant advances had been made in downtown.

The site of the Liberty Avenue protest by disability rights activists in Pittsburgh is an important reminder that progress is neither inevitable nor assured. Twenty-two years after the passage of the Architectural Barriers Act in 1968, the residents of Pittsburgh with disabilities still lacked access to many of the areas in the heart of their own city. It took years of advocacy, activism, and assessment to fight toward a more equitable and accessible city for all of Pittsburgh’s citizens. Without the unflagging efforts of organizations like the United Cerebral Palsy of Pittsburgh Association, Three Rivers Center for Independent Living, and Open Doors for the Handicapped, as well as the allyship of political leaders like Richard Caliguiri, the advancements in accessibility Pittsburgh enjoys would not have been possible.