This elegant home is the historic Hotze House, which was built by Austrian immigrant Peter Hotze in 1900. Hotze was a prosperous cotton merchant and one of the state's most successful businessmen. In Little Rock, he contributed to the city's development and was active in local civic affairs. In terms of design, the house combines Georgian Revival and Beau-Arts architecture. It's most prominent feature is the round two-story portico with fluted Ionic columns. Other highlights include dormers on the roof, wooden railings above the portico and the roof with turned balusters, and a main entrance surrounded by a broken stone pediment and stone pilasters. The house appears to be a private residence. It was added to the National Register of Historic Places in 1975.

Successful cotton trader and Austrian immigrant Peter Hotze built Hotze house in 1900. Hotze was one of Arkansas' most successful businessmen in the last quarter of the 19th century. 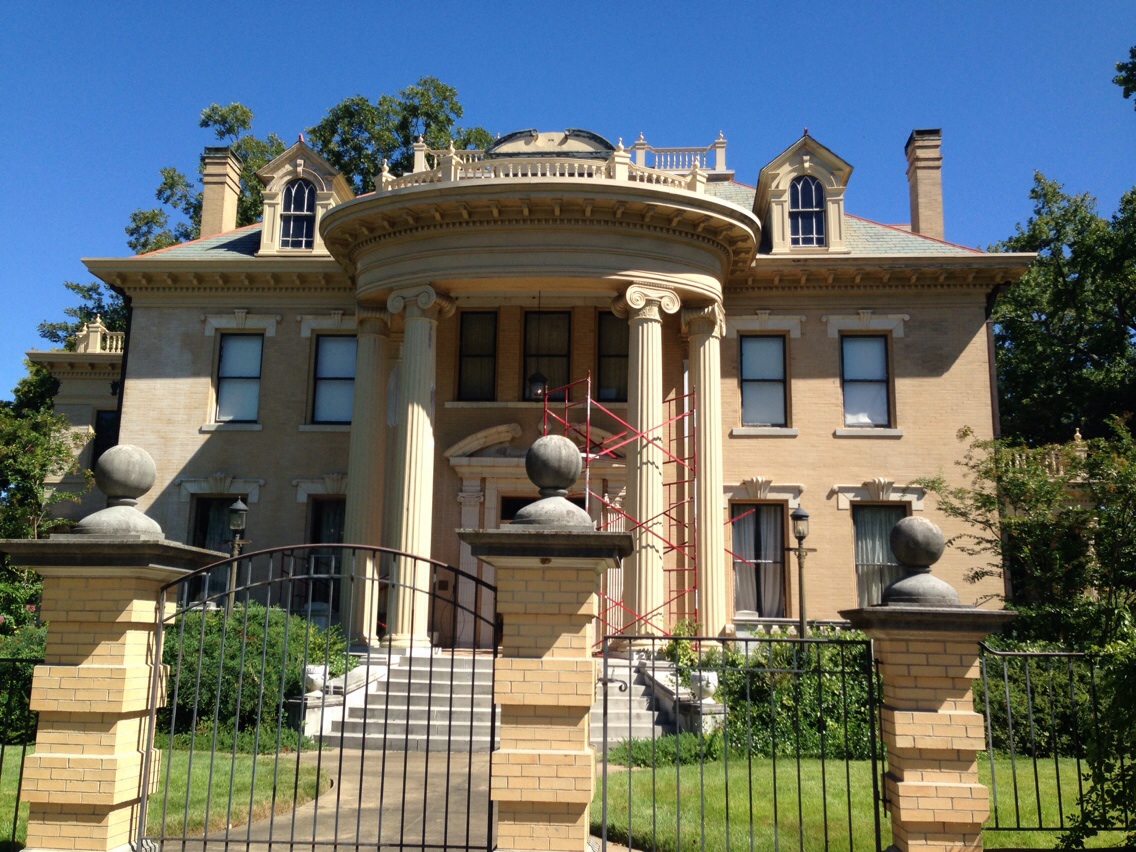 Peter Hotze was born in Innsbruck, Austria on October 12, 1836. His father, Wolfgang, died when he was young but his mother, Mary Sophia, inherited a large sum of money, which enabled her to send Hotze and his two brothers to the University of Innsbruck. Sadly, she died in 1856. Hotze and his brother Conrad immigrated to the United States at that time and Hotze made his way to Little Rock in 1857 (the third brother, Frederick, joined the Austrian army and rose to the rank of field marshal).

There, he established a general merchandise business. Three years later, he joined a local military company called the Capital Guards, which became Company A of the 6th Arkansas Regiment in 1861 after the start of the Civil War. The company fought in a number of battles including at Shiloh, Chicamauga, and Murfreesboro. Hotze was wounded and captured in April 1864 at the Battle of Franklin and was sent to a prisoner-of-war camp in Ohio. He remained there until the war ended the next year.

When Hotze returned to Little Rock, he formed a general merchandise business partnership with Company A's commander, John G. Fletcher. He married Johanne Krause in 1868 and the next year built his first house called the First Hotze House (which is located directly behind the house on Main Street and is also listed on the National Register of Historic Places). They had three children; two daughters and one son.

Hotze and Fletcher eventually focused on trading cotton, hoping to take advantage of the New York City market. One reason they chose to make this move was likely due to Hotze's reputation as a trustworthy businessman. He managed to pay back his creditors in the North with $5,000 in gold he had buried before the war (he instructed his brother, Conrad, to go to Little Rock and recover the gold). Hotze moved to New York City in 1873 and Fletcher remained in Little Rock. Fletcher bought the cotton and sent it to Hotze who then sold it. Hotze lived in New York City for 27 years, becoming one of the city's top cotton traders.

The two partners terminated the business in 1900 and retired. Hotze moved back to Little Rock and built the house, where he lived with his son, Frederick, and his daughter Clara. He died on April 12, 1901. Frederick lived in the house until he died in 1972. It appears the house has remained a private residence ever since.