Michael Karl Goetz was born in Ingenheim, a village in the Alsace-Lorraine region of France, a mere 18 miles from St. Joseph architect E.J. Eckel’s birthplace of Strasbourg. M.K. Goetz came to America in 1854 and was headed to California when he passed through St. Joseph in 1857. Realizing the potential of this gateway to the west, Goetz settled in St. Joseph and in 1859 he opened a brewery at the corner of 6th and Albemarle Streets along the Blacksnake Creek. 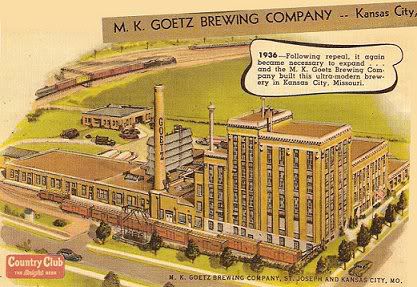 Michael Karl Goetz was born in Ingenheim, a village in the Alsace-Lorraine region of France, a mere 18 miles from St. Joseph architect E.J. Eckel’s birthplace of Strasbourg. The Alsace-Lorraine region was German speaking, originally a part of the Holy Roman Empire until it was conquered by the French in the sixteenth and seventeenth centuries. The rise of German nationalism in the nineteenth century, however, led to the Franco-German Wars in 1871, regarding disputed territories like Alsace-Lorraine. It became a part of the German Empire but was returned to France after the Great War.

The struggle between German and French nationalism in the nineteenth century led to a mass exodus of German immigrants to America. Seeking similar territory like the fertile land of the Rhine River they were accustomed to farming, many German-Americans settled along the Missouri River in an area which became known as “the Rhinelands.” M.K. Goetz came to America in 1854 and was headed to California when he passed through St. Joseph in 1857. Realizing the potential of this gateway to the west, Goetz settled in St. Joseph and in 1859 he opened a brewery at the corner of 6th and Albemarle Streets along the Blacksnake Creek.

Though not the only German brewer in St. Joseph, Goetz quickly became the most successful, incorporating the business in 1895. When M.K. Goetz passed away in 1901, his four sons and son-in-law inherited the business, each holding positions in the corporation and specializing in a facet of its operation. William L. Goetz was brewmaster, Frank Goetz was the mechanical engineer, Albert Goetz specialized in sales, while Henry Goetz was treasurer, and Theodore Benkendorf was director.

In 1919 the Eighteenth Amendment was passed, requiring prohibition to be enforced by 1920. It became illegal to manufacture, sell, or transport alcohol in the United States. While most of the local and national breweries went out of business in the prohibition years, Goetz survived by converting its manufacturing to sell Country Club Near Beer, a non-alcoholic alternative. The M.K. Goetz Brewing Company not only survived prohibition, but prospered and thrived into the mid-century.

William L. Goetz was an active philanthropist and historic preservationist, serving as president of the St. Joseph Museum board from its inception in 1927. Under the leadership of W.L. Goetz, the museum grew from an annex in the St. Joseph Public Library to the A.J. August House. Goetz oversaw the purchase of the extensive Harry L. George collection and the M.K. Goetz Brewing Co. purchased the Wyeth-Tootle Mansion to house the museum in 1947. In anticipation of the centennial of the founding of the brewing company and the centennial of the Pony Express, Frank Goetz established the Goetz Pony Express Foundation to purchase and renovate the original Pony Express Stables at 914 Penn Street. In 1959, the Pony Express Foundation and St. Joseph Museum established the Pony Express Museum.