The house at 415 Pipe Stave Hollow Road in Miller Place is the Samuel Hopkins House, on a bluff near Mount Sinai Harbor. The main part of the wood frame house is two-story, built in 1770 in the Georgian style . Attached to the east side is an even older house, one-and-a-half story, dating to about 1720, formerly owned by the Robinson family and purchased by Samuel Hopkins in 1858. Both portions of the house were remodeled in 1816 in the Federal style and received new windows and entrances. The Samuel Hopkins House was listed in the New York and National Registers of Historic Places in 2009. Three outbuildings contribute to the historical significance: a barn, smokehouse, and outhouse. The greenhouse, in-ground pool, and former dairy/current pool house on the roughly 2-acre tract are modern or too altered to be included. 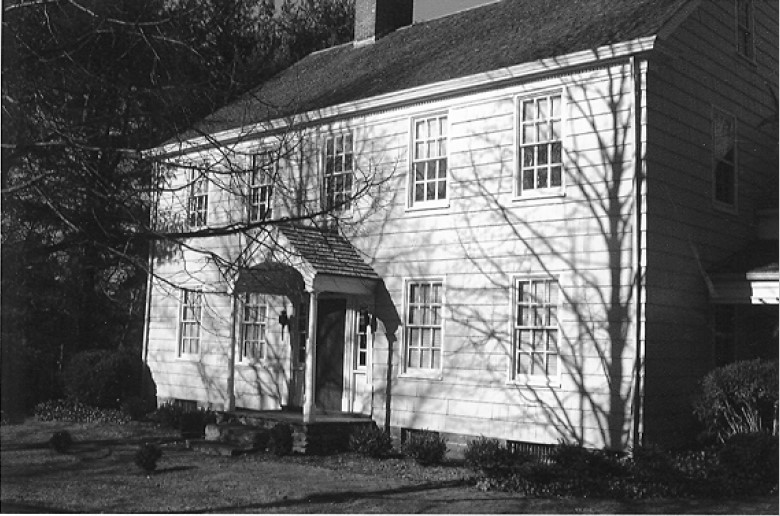 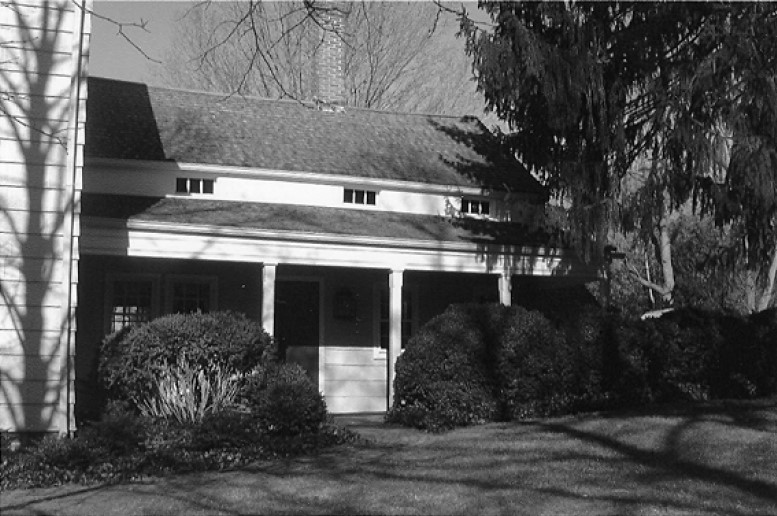 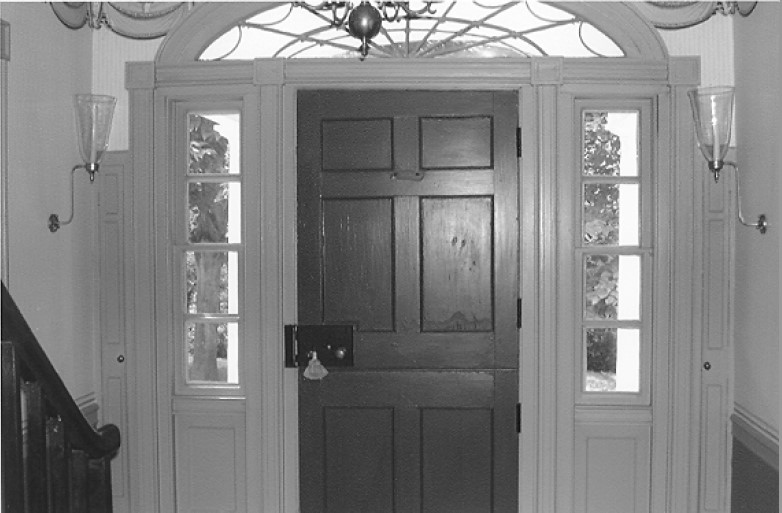 Fireplace, woodwork details in the study in 2008 (Virginia Bartos) 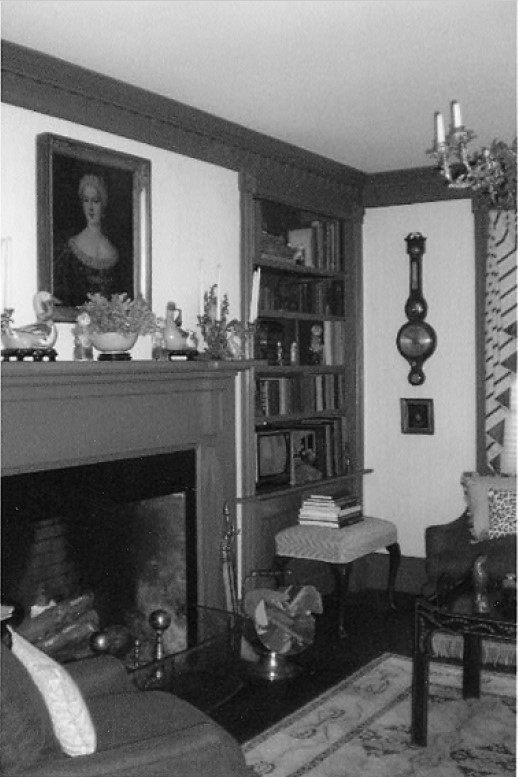 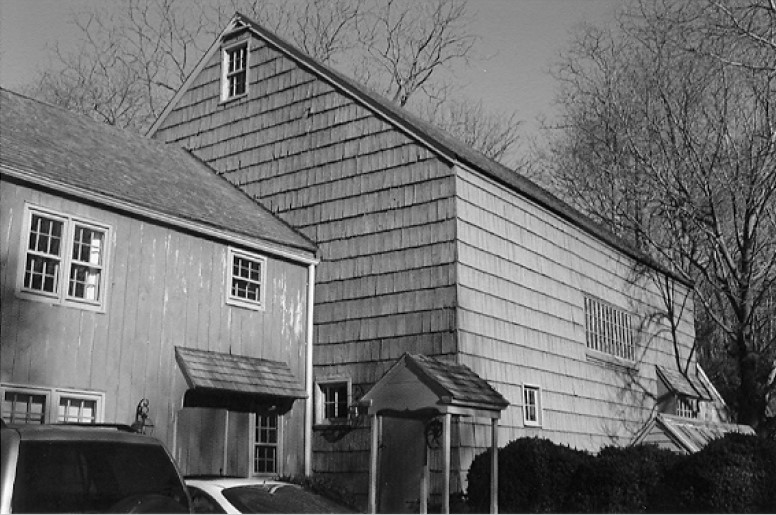 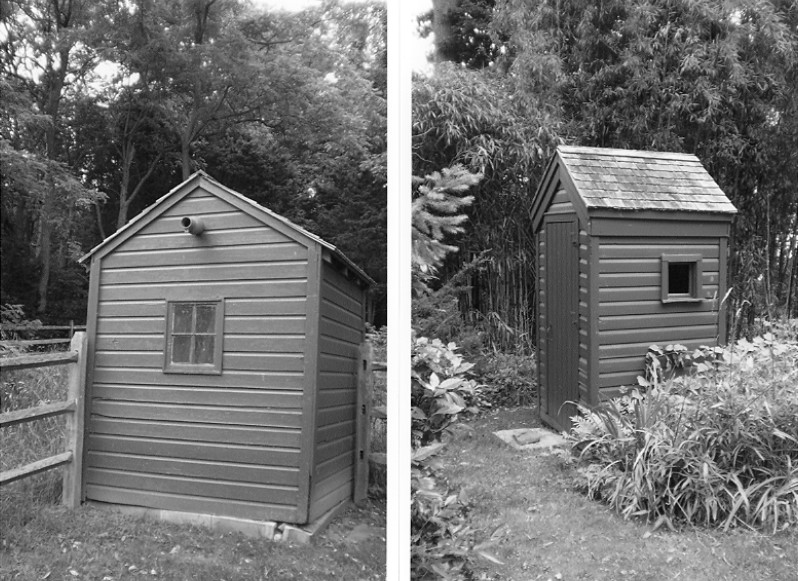 John Robinson was a pioneer settler in the Miller's Place area and built a house overlooking Mt. Sinai Harbor (then called Old Man's Harbor) in 1720. "Captain Robinson" farmed the land with his two sons and served as the Town of Brookhaven's overseer. When Samuel Hopkins bought the house on 130 acres from the Robinson family in 1758, he reportedly split the house in two and moved part of it to the northwest, closer to Mt. Sinai Harbor. The remaining part of the house became the east wing when a larger wing was added to the west in 1770.

The Hopkins family was involved in farming and in shipping farm products to New York City markets from Mt. Sinai harbor in the eighteenth and nineteenth centuries. Samuel Hopkins was the great-grandson of a Mayflower arrival in 1620, Stephen Hopkins. Samuel was born in 1708 on Shelter Island and moved to Miller's Place in 1758 with his wife and a 14-year-old son, Samuel Jr. (1744-1807). Samuel Sr. raised cattle on his new farm overlooking the harbor; he died in 1788. Samuel Jr. fought in the American Revolutionary War; he married a local girl, Elizabeth Woodhull, and had a son, Samuel III (born 1781). It is probably Samuel III who updated the house in 1816 in the currently popular Adam style. Samuel III married Maria Woodhull and had ten children, one of whom was Samuel Judson Hopkins (b. 1836). Samuel Judson Hopkins married Sarah Hallock in 1864 and farmed 450 acres; his surviving 1890 farm ledger shows he was mainly a dairy farmer but also ran a livery business. Later generations of Hopkins expanded the farm to over 1,100 acres. The harbor became inaccessible to large ships by the early twentieth century due to storms and shoreline erosion. The vacant house was rented out by the Hopkins family beginning in 1918, and was purchased by Clarissa Clayton of New York City in 1940; the house was the family's summer home for 25 years. The house was acquired in 1975 by Robert Arnold and restored; he still owned the house on two acres of the original farm in 2008.

The 1770 (main) portion of the Samuel Hopkins house is the typical two rooms wide by two rooms deep layout over a full basement; the foundation is Connecticut granite. The main entrance door in the central bay is topped by an elaborate fanlight and sheltered by a slate-floored porch with an arched pediment supported by two Tuscan columns. A similar layout is seen on the north side of the main block, with a simpler style of entry porch. Hand-hewn joists and roof framing timbers are visible in the unfinished attic, above the second story. Original wood floors and fireplaces remain, some with wood paneling connected to built-in shelving.

The 1720 (east) section of the house also retains the original wood floors and wood doors. A large hearth is slightly off-center and the house had a sleeping loft. A single story, shed-roof porch spans the width of the 1720 section on the south side; a wooden double-door bulkhead entrance at the west end of the porch leads to the basement under the 1770 section. Both the 1720 and 1770 sections were clad in wood shingles at the time of the NRHP documentation in 2008. Most of the home's windows were six-over-six style; hardware for shutters was seen but the shutters were gone.

The historic barn, to the east of the house at the end of the driveway, is English, wood frame, with original framing, wood floors and stalls. A rental apartment wing was added on the west side of the barn, shingle-sided on the north to match the barn. A smokehouse is in the northeast corner of the fenced pasture north of the barn and measures about six feet square; the masonry foundation supports a wood clapboard outbuilding. A wood shingled privy or outhouse is west of the pasture, about 5 feet square, with a board and batten door. An historic well is located south of the barn's apartment wing, with a wooden well head.