Elnora Smith Park, in Evanston IL, is named for Elnora Smith (1894-1958). Smith was a Physical Education teacher in Evanston, who also dedicated a majority of her life to advocating for safer playground equipment and the establishment of safer parks in Evanston, IL. Additionally, Smith was a key member in the Evanston Rationing office during WWII. 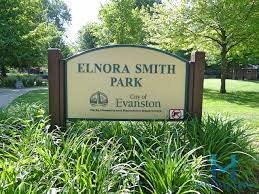 As a graduate of Western Michigan College, Smith arrived in Evanston in 1923 to teach at district 75 (now 65) schools. During this time, Smith was the Physical Education supervisor of all District 75 schools, but later oversaw a larger staff of teachers. Smith held this position for 35 years. Additionally, Smith was also known as a “playground architect” advocating for safer playground equipment and the establishment of more safe playgrounds in Evanston. In 1961 a park, focused on offering safe equipment for younger children, was dedicated in her name. Furthermore, during WWII, Smith was given a leave of absence from her District 75 position in order to run the Evanston Rationing office, a critical organization during wartime.