The establishment of Kansas State Agricultural College (later Kansas State University) in 1863 and arrival of the Kansas Pacific Railroad into Manhattan in 1866 helped spur a rise in migration into the area. The Strasser House represents the start of increased residential construction during the 1870s, hence its stone masonry construction. Most of the home's early occupants came to Manhattan from Illinois, Ohio, Indiana, and Ohio including Phillipena J. Strasser, a widow, who had the house built in 1874 before she remarried and moved one year later. 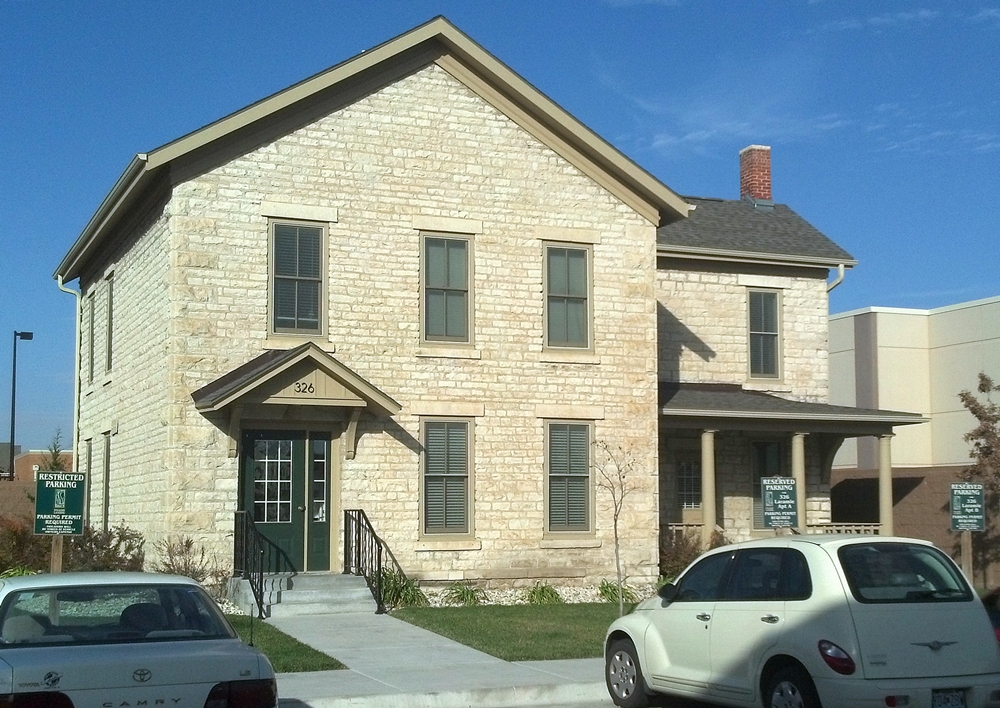 The Phillipena J. Strasser House, constructed in 1874, is an exemplary Gable-Front-and-Wing Stone House property type and associated with the evolution of residential development, notably stone masonry construction, in Manhattan during the nineteenth century. The arrival of the Kansas Pacific Railroad into Manhattan in 1866 helped spur the population growth, as did the establishment of Kansas State Agricultural College in 1863. The original two-story gable-front house was built for German immigrant Phillipena J. Strasser, who came to Kansas from Illinois. She only stayed in the house for one year. The stories attached to the numerous residents enjoy their own unique history, but they also speak to the broader history of Manhattan and eastern Kansas.

In 1867, Phillipena J. Strasser (circa 1837-1920), a German immigrant, came to Riley County, Kansas, from Illinois, where she had lived for about four years. Before moving to Illinois, Strasser lived in Missouri, where she married and had her first two children. Her second two children were born in Illinois. (Both her first husband's name and her immigration date are unknown.) In April 1875, shortly after the completion of the Phillipena J. Strasser House, Phillipena married Isom Tull (1834-1917), a Riley County farmer. Tull, an Indiana native, was a widower with seven children. Phillipena and Isom resided at his farm. (They later separated and Phillipena moved to Topeka, where she stayed the rest of her life.)

So, Phillipena Strasser only lived in the historic home for one year. After her marriage, in 1875, she sold the historic house to C. Perry McDonald (1833-1908). Like Phillipena's husband, McDonald came to Kansas from Indiana, arriving in 1854 and claiming land as a free-soil settler. He stayed in the Strasser home until 1882, when he sold it to Hyram Keyes, a weaver, who also owned a neighboring lot. Keyes came to Kansas in the late 1850s or early 1860s from Ohio with his wife. He and his wife lived in the home with their seven children until 1886. In 1885, Keyes added a two-story intersecting wing to the east side of the house.

Keyes sold the home and neighboring lot in 1886 to Pennsylvania native Jennie R. (Moffit) Marsh (1850-1921). She married Francis E. Marsh, an Ohio native and widower who settled in Kansas in 1871 and established himself as a Manhattan grocer. The Marsh family resided in the Strasser House until 1913 when Jennie was committed to the Topeka State Hospital, where she remained until her death, and Francis moved to Wabaunsee, Kansas, to live with his son Frank E. Marsh.

After the Marsh family sold the historic house in 1913, the home changed hands several times until Dr. Henley H. Haymaker, a professor of plant pathology at Kansas State Agricultural College (later Kansas State University) purchased the Strasser House in 1936. Haymaker remained owned the home for forty-four years. During that time, he gained recognition and won awards for his academic work and research. The University built a dormitory in 1996 and named it Haymaker Hall after the acclaimed professor. Furthermore, KSU's Division of Biology awards annually the Haymaker Teaching Excellence Award and the Haymaker Graduate Student Research Award (funded by the H. Henley Haymaker Endowment in his honor).

Dr. Haymaker sold the Phillipena J. Strasser House property in 1980. By 1988, Charles R. "Dick" Dickens, who once rented the downstairs unit from Haymaker, purchased the house (and bequeathed it to his sons after his passing in 1991). Dickens served as the first commissioner of the Manhattan City League Baseball program. His involvement in the program for more than forty years inspired the program to honor him with the "C. R. Dickens Memorial Press Box" at Manhattan's Anneberg Park.

Today, the home survives as a reminder of Manhattan's early development, demonstrated by its stone masonry. The early story attached to the Strasser House is one of migrants traveling to Kansas from Illinois, Indiana, Ohio, and Pennsylvania as people moved west during the late nineteenth and early twentieth century. Often widows and widowers with many children, they worked as farmers, weavers and grocers. As eastern Kansas became settled, its ownership became dominated by a successful Kansas State University professor and a man committed to his community, notably the local baseball program.