The Kimble House is a two-story limestone structure that was built in 1911-12 for Francis Byron "Barney" Kimble and his wife, Mary Ann Kimble. The Kimble family proved highly influential in Manhattan. Barney's father, Samuel Kimble, moved to the Manhattan area in 1857 from Ohio to work as a carpenter and stonemason. Sam, Sr. built a limestone farmhouse for his family west of Manhattan. By the time he died in 1890, his farmstead had exceeded 2,200 acres. In 1894 Barney's brother, Judge Sam Kimble, Jr., built a limestone home he called "Kastle Kimble," and in that same year, Barney constructed a limestone home west of Manhattan known as "Kimble Cliff." The historic Kimble House enjoys a Queen Anne style with distinct Colonial influences; the Kimbles owned the property until the late 1940s. 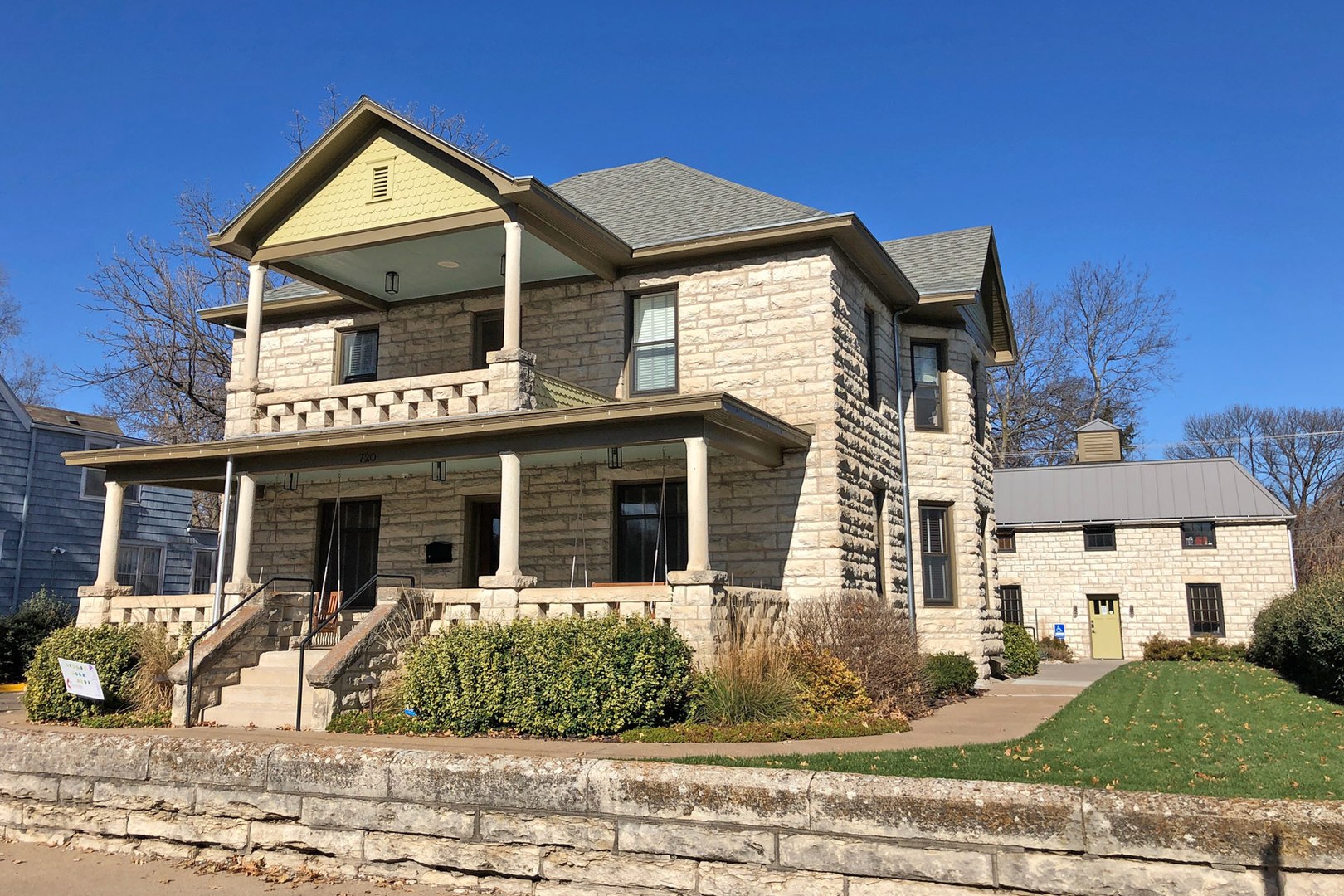 The Francis Byron (Barney) Kimble House, a Queen Anne Free Classic style residence, was constructed in 1911-1912 of locally quarried limestone. Indeed, the house from top to bottom is limestone, as are the other structures on the property. Barney Kimble and his wife Mary Ann purchased the home later in their lives as an ipso facto retirement home. Though Barney died in 1920, Mary Ann stayed in the home until 1940, and the family sold the house just after World War II ended.

In the late 1850s, when Barney reached nine years old, the Kimble family moved to Riley County from Ohio (shortly after Kansas Territory opened for settlement in 1854). Barney's father, Samuel Kimble (1822-1890), a native of Chester County, Pennsylvania, came to Manhattan with his wife Mary Ann; they served as one of the Manhattan area's first settlers. During the 1860s, while working at Fort Riley as a carpenter and stonemason, Samuel constructed his family's home and farmstead. By the time he died in 1890, his farmstead had grown into a large stock farm that exceeded 2,200 acres. After his death, his widow, Mary Ann, built a sizable wood-frame house on the same block in which Barney and his wife Mary Ann erected the now-historic retirement home. Samuel and Mary Ann had numerous children, many of whom constructed several noteworthy buildings; the Kimble influence in Manhattan during the late nineteenth century is impossible to ignore.

Barney Kimble built the home in 1911, a second residence as he also owned an extensive ranch. The "Free Classic" variant of the Queen Anne-style became common after 1890. Though the homes enjoyed many Queen Anne features, the homes also included attributes of the Colonial Revival style, such as the case with the Kimble House with its classical columns as porch supports. Barney and Mary Ann Kimble lived in this residence while in their 50s. Barney died in 1920, but Mary Ann held the property for two more decades until her death in 1940. Elsie Ann (Kimble) Wilson inherited the house in 1941 and remained its owner for five years.

The story of the Kimble house after the 1940s is one of constant transition as the home functioned as a law office, funeral home, and health services center, to name a few. In 1946, the Kimble family sold the property to Edwin J. Frick, known for opening Manhattan's Sunset Zoo. Frick sold it to Bernard J. Conroy in 1950. Conroy converted the barn on the lot to a chapel and enlarged the stable and garage to accommodate his mortuary. The house and property operated as a funeral home until 1977, when Conroy sold it to John Sullivan of Sullivan and Associates. Jeff and LeAnn Mathis purchased the property in 2013 and created "Katie's Way," which provides behavioral health services for those ages 2-26.