The Woman Suffrage Parade of 1913 was a march down Pennsylvania Avenue in Washington, D.C. on March 3, 1913, organized by the suffragist Alice Paul for the National American Woman Suffrage Association. The march was scheduled on the day before President Woodrow Wilson's inauguration to "march in a spirit of protest against the present political organization of society, from which women are excluded", as the official program stated. The parade included ten bands, five mounted brigades, 26 floats, and around 8000 marchers, including many notables such as Helen Keller, who was scheduled to speak at Constitution Hall after the march. After a non-eventful beginning to the march, the marchers encountered crowds, mostly male, who jeered and harassed the women. Over 200 women were treated for injuries at local hospitals. The violent actions of the mob discredited the arguments of anti-suffragists who in the past had claimed that they were concerned about the physical welfare of women who might be injured when they tried to cast votes. 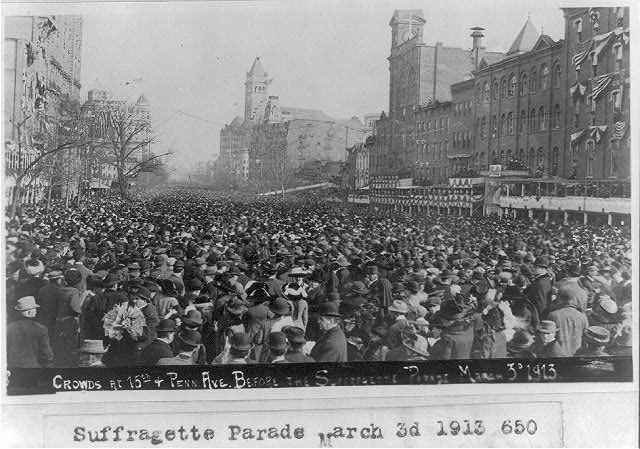 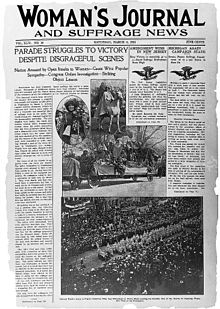 Christine Lunardini. From Equal Suffrage to Equal Rights: Alice Paul and the National Woman's Party, 1910-1928-click the link below for more information about this book

American suffragists Alice Paul and Lucy Burns spearheaded a drive to adopt a national strategy for women's suffrage in the National American Woman Suffrage Association. Both women recognized that the women from the six states that had full suffrage at the time comprised a powerful voting bloc. They submitted a proposal to Anna Howard Shaw and the NAWSA leadership at their annual convention in 1912. The leadership of NAWA believed it best to devote their full attention to their grassroots community-by-community and state-by-state strategy. As a result, they rejected the idea of holding a campaign that might alienate male allies, especially those within Congress and the President's administration. Alice Paul and Burns appealed to prominent reformer Jane Addams, who interceded on their behalf.

The women eventually persuaded leaders within the NAWSA to endorse their plan for an immense pro-suffrage parade in Washington, D.C. to coincide with newly elected President Woodrow Wilson's inauguration. Paul and Burns were appointed chair and vice-chair of NAWSA's Congressional Committee ant they recruited Crystal Eastman, Mary Ritter Beard, and Dora Kelley Lewis to the Committee and were forced to organize volunteers, plan, and raise funds for the parade with little help from the organization.Affiliates of NAWSA from various states organized contingents to march and activities leading up to the march, such as suffrage hikes.

African-American women were asked to march separately at the end of the march, because white suffragists were concerned about losing the support of southern voters. However, Ida B. Wells, founder of the Alpha Suffrage Club of Chicago, joined the Illinois delegation in the middle of the march, an action that was controversial not only because she placed herself among white marchers, but because she marched separately from other Black women.