Beury was established in the late 1870s by Joseph L. Beury as a mining camp for nearby Echo Mine. The town grew rapidly and boasted over five hundred residents by 1900. In addition to natural resource economies typical of the area, Beury also benefitted from a beer-bottling plant. The town’s namesake chose Beury as the site of his family mansion, a grand twenty-three room affair with well-kept grounds. However, Beury faded as quickly as it had sprung up and the town was all but abandoned by 1925. A few obstinate holdouts maintained residence for another decade before even they moved away. With the exception of Melcenia Fields, an eccentric and misanthropic hermit who became a local icon, no one has called Beury home in almost a century. The buildings have all crumbled or been demolished and the Beury mansion was buried under rubble after a 2001 flood. 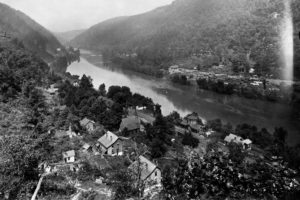 Joseph L. Beury, founder, namesake, and resident of the town. 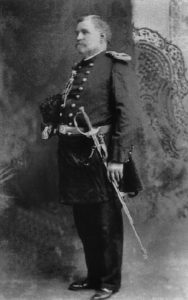 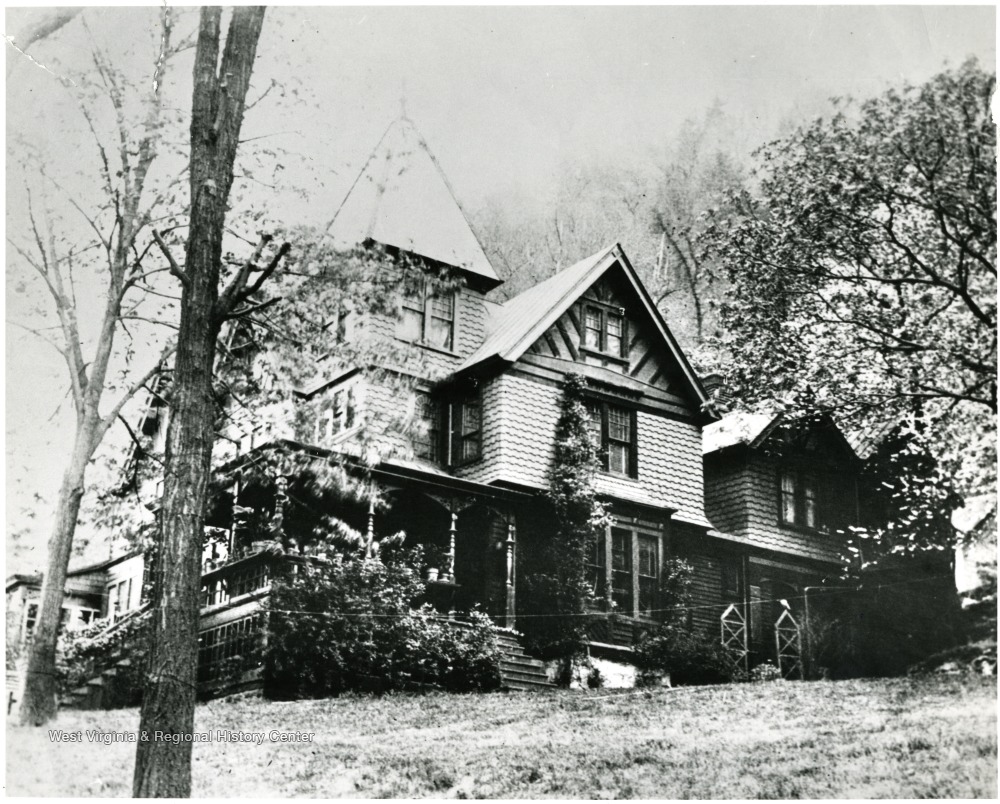 Company store and offices. The C&O railroad is just out of view in front of the building. 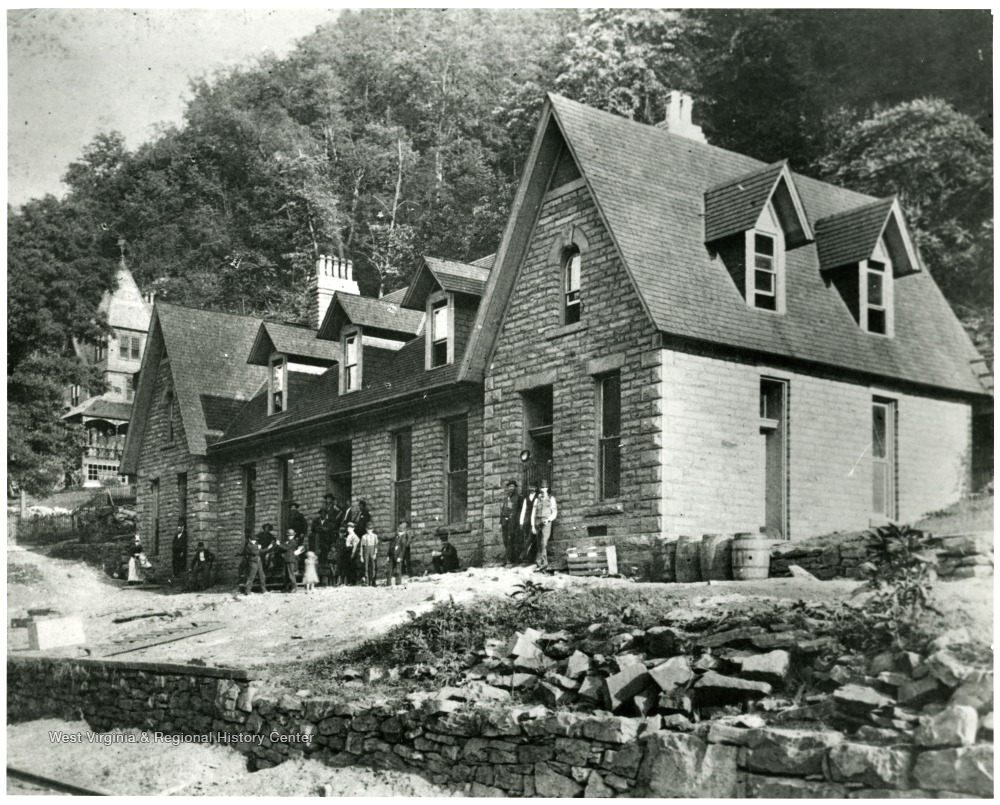 The town’s only church. 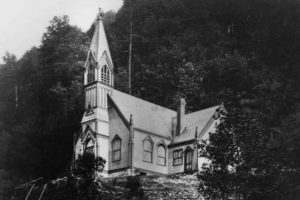 Melcenia Fields lived in Beury for many years after its decline and became a local icon. 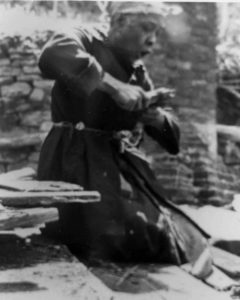 Beury is, as the name might suggest, linked closely to the activities of New River Gorge coal entrepreneur, Joseph L. Beury. Beury invested in real estate throughout the gorge in the early 1870s. This proved to be an excellent business decision as the area’s coal boom began in 1873. One of Beury’s first settlements, Quinnimont, was also the site of the first shipment of coal out of the gorge. The settlement of Beury was initially established as the Echo Mining Camp. This camp hosted miners working Beury’s Echo Mine a half mile downriver. Echo Mine became fully operational in 1881 and began shipping coal that same year. Cooper & Company initially served as business partners in the venture before the mine was sold to the newly created Echo Coal and Coke Company in 1898. After a brief stint of operation by the Echo Smokeless Coal Company, the mine changed hands a final time to the Beury Brothers Coal and Coke Company.

Beury grew rapidly in the last two decades of the nineteenth century. In addition to physically mining coal in the Echo Mine, workers were also needed to operate an inclined railroad to the Chesapeake and Ohio (C&O) main line, harvest timber, tend to fifty coke ovens, and staff local businesses. Unlike most settlements in the region, Beury also benefitted from an economy not related to natural resources. The Fayette Liquor Company bottled beer for local and national distribution. A post office being installed in Beury in 1888 helped cement the growing town’s place in the New River Gorge. In 1895, Beury was home to one hundred families and by 1900, over five hundred people resided in town. The residents of Beury were active participants in community and labor organization. The New River Gorge’s first Masonic Lodge was founded in Beury, which attracted visitors from up and down the river. A Knights of Labor National Trade Assembly was also established here in 1890. N. Miller was appointed organizer for the entire New River District. The assembly was later reorganized into the more recognizable United Mine Workers of America Local No. 988. A 1909 mine explosion in the Echo Mine killed six miners and further catalyzed union activities in Beury.

Despite the official name of the town being recorded as Echo Mining Camp, Joseph Beury’s decision to build a mansion in Beury solidified usage of the common name. The total cost of the home is purported to be upwards of one hundred thousand dollars – quite a handsome sum for the time and area. The mansion featured twenty-three rooms for Beury, his wife, and their four children. Stone gardens, a swimming pool, greenhouses, and a stable graced the grounds of the residence. The house even benefitted from a bit of architectural ingenuity; the nearby creek could be diverted to flow underneath the home in the summer and provide a cooling effect. In the winter, the water was diverted back to its original path. The isolated and remote nature of Beury did not stop its namesake from living a lavish lifestyle. The Beury patriarch frequently hired orchestras to play on the lawn of the estate on Sundays or summer evenings. Joseph Beury died in his home in 1903 and was buried nearby.

Beury’s almost meteoric population boom proved to be a short-lived phenomenon. The 1919 census recorded 495 people living in town. This was a slight drop from 1900 population levels. Over a period of just five years most of Beury’s residents abandoned the town, causing the post office to close in 1925. The Masonic Lodge burnt down the same year and was rebuilt in the more active Thurmond. The Beury family continued to occupy their mansion until 1936, though they were one of the last holdouts to leave. The town remained abandoned for several decades until a single woman moved in around 1960. Melcenia Fields was an ill-tempered hermit who called Beury home. Despite her misanthropic tendencies, Fields became a beloved icon of the area. When she became too old to continue making the seven-mile trek to Thurmond for supplies, C&O operators would leave bundles of groceries at the edge of the railroad and ensure that extra coal “fell” off the train. Since Fields’ passing in 1982, no one has maintained residence in Beury. The buildings have all collapsed or had their materials repurposed. A 2001 flood covered the remains of the Beury mansion with rubble. Beury is a quintessential example of the ephemerality of coal towns in the New River Gorge.