Royal was established just across the river from Prince in 1890. By 1891, the coal mine at Royal was producing coal for distribution outside of the New River Gorge. However, the Chesapeake & Ohio Railroad ran through Prince, not Royal. In order to move coal across the river, a technologically impressive aerial tramway was constructed. Known as the Trenton Bleichert Tramway, it could theoretically transport eighty tons of coal per hour down the half mile cable. Royal was the first and only place in the New River Gorge to utilize aerial transportation of coal. The town was also notable for its role in labor advocacy and union strikes. After Royal was abandoned in 1940, it was completely overrun by the forest. There is now little left but foundations and a few stone walls.

Before this railroad bridge was built in 1890, a ferry was the only way between Prince and Royal. 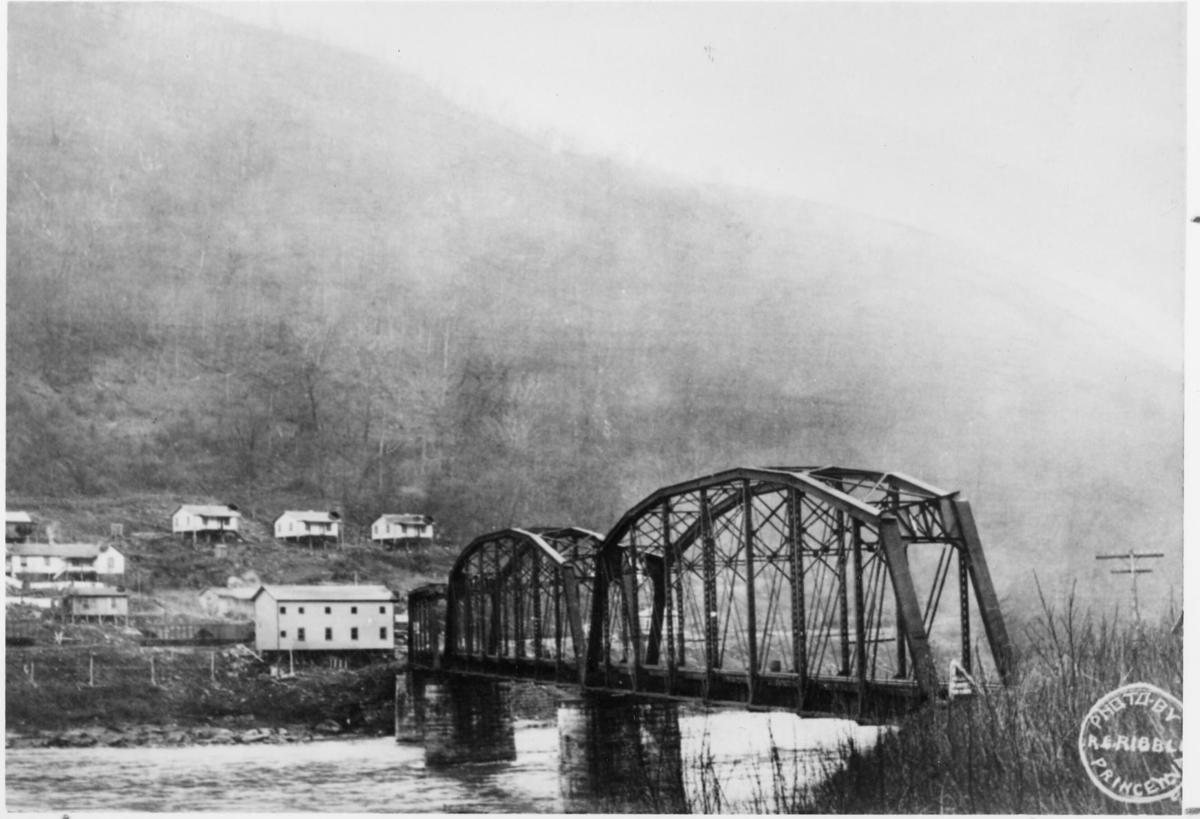 Aerial view of the area. Prince is the larger area on the left and Royal is on the right. 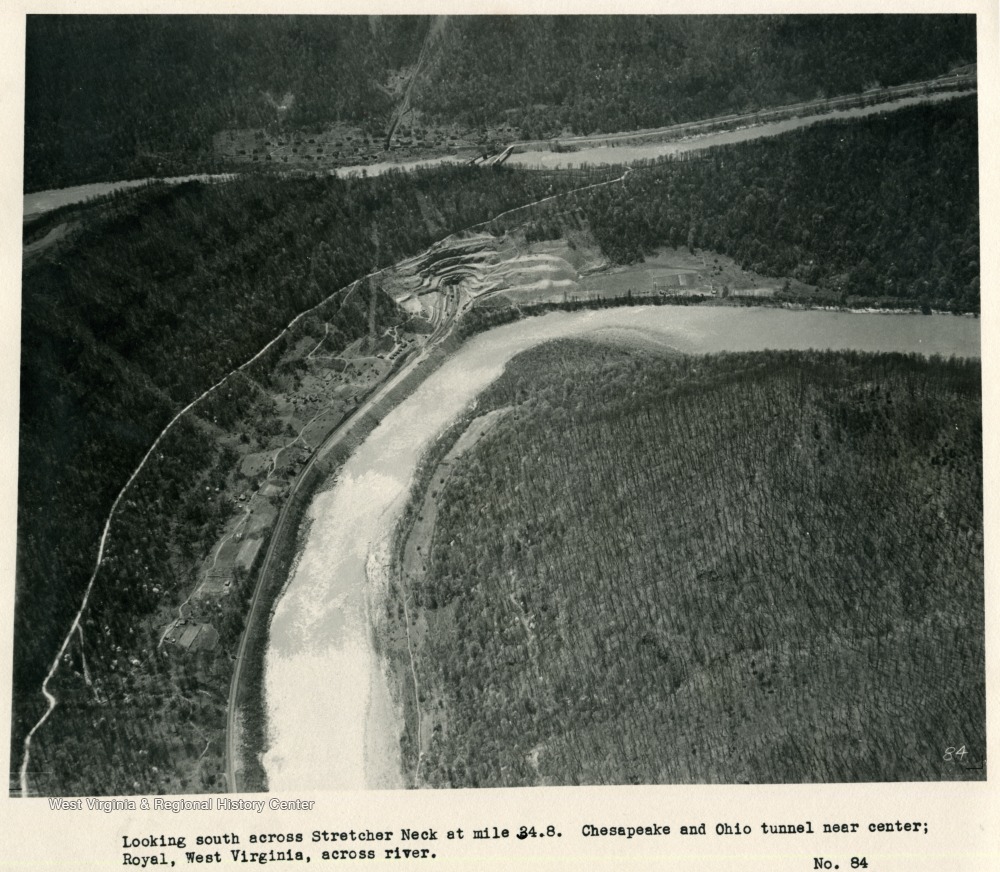 A house in Royal. These homes were rented for $5.99 a month with an additional $1.00 charged for coal. 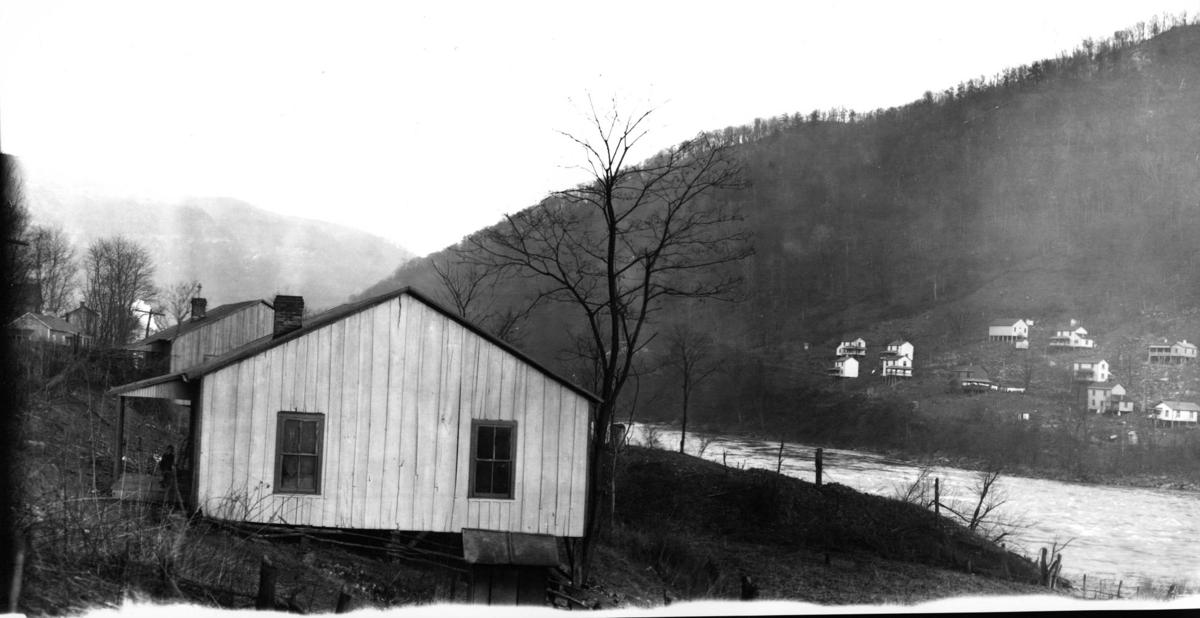 Detail of a bucket on the TBT. 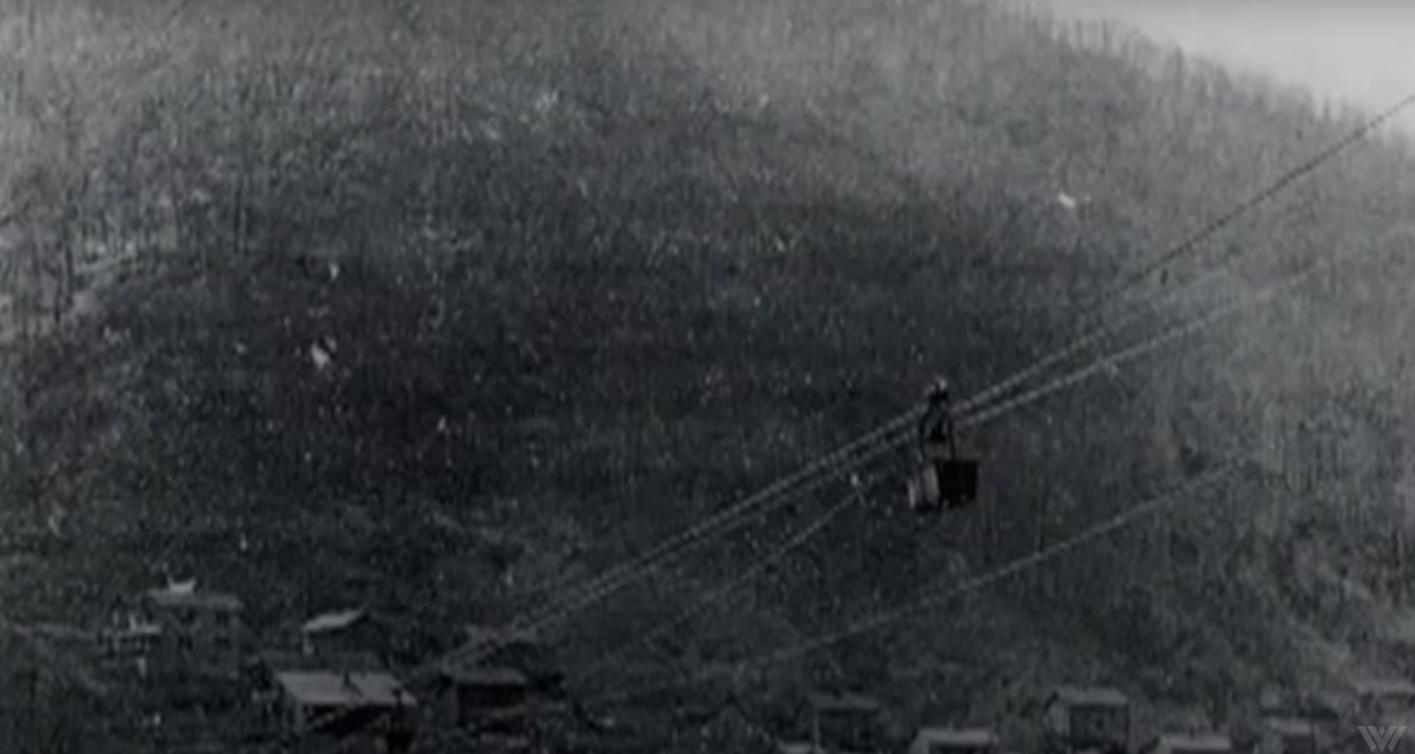 Royal after the demolition of the TBT and replacement with a traditional inclined conveyor and tipple. 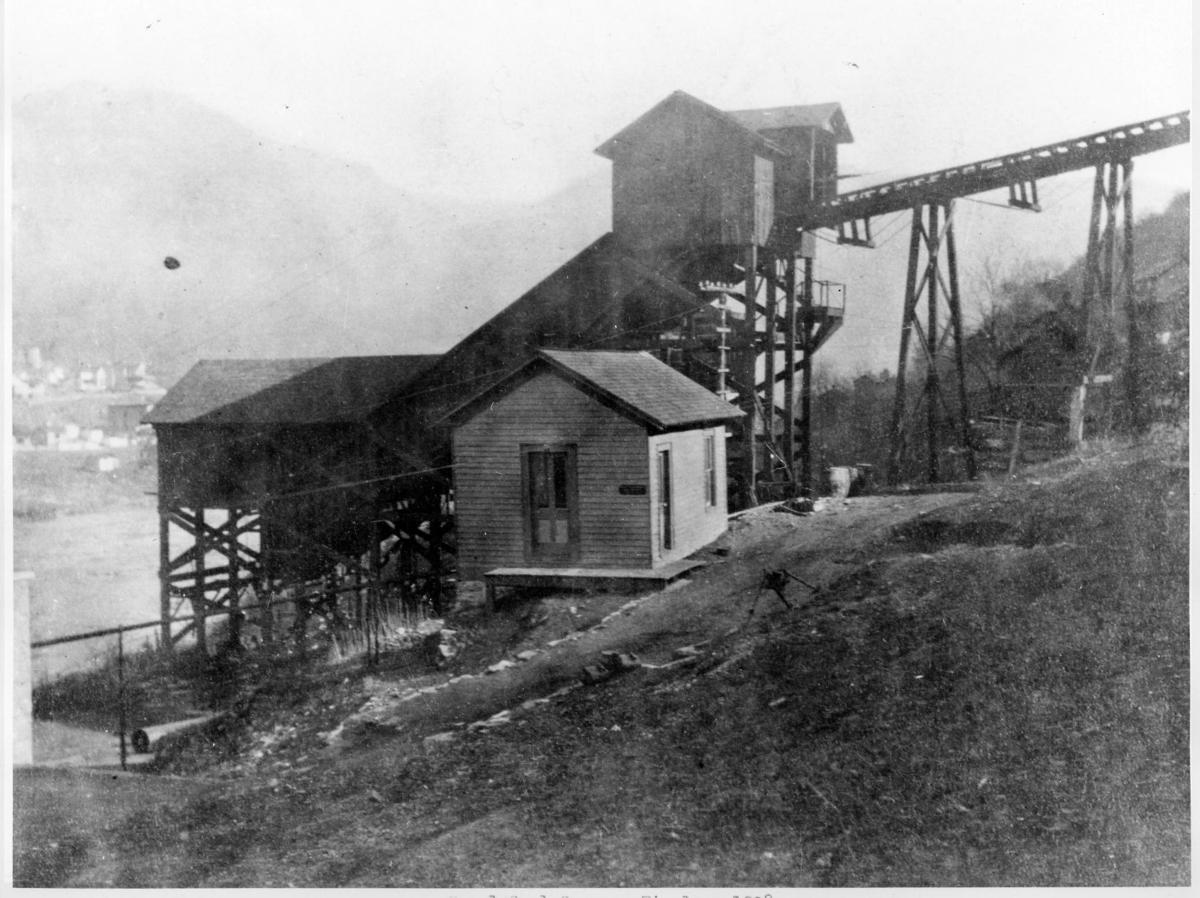 All that remains in Royal these days are crumbling walls and foundations. 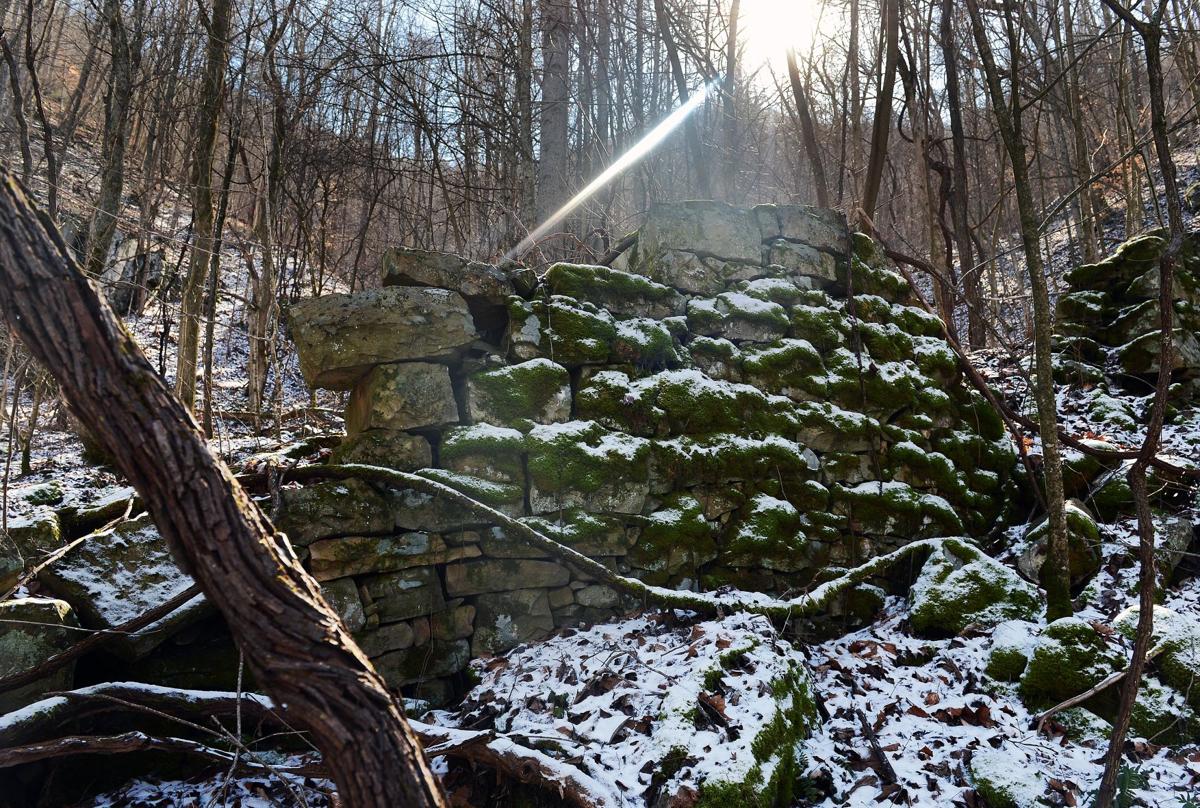 Royal was a moderately sized coal town on the South Bank of the New River. Situated almost directly across from Prince, the two towns were heavily linked. The town of Royal predated coal mining in the New River Gorge, though it was settled only by a few independent farmers and there were no community structures. James Kay and brother-in-law James Laing established the Royal Coal and Coke Company in 1890. One important shareholder in the company was William Prince, founder and namesake of the town of Prince. By 1891, Kay and Laing had begun developing a mine in Royal. In the early years, priority was given to company buildings and indispensable structures for mining operations. Many workers commuted from Prince or nearby farms, while others made do in Royal with temporary shelters. As there was no bridge across the New River, people entering town from the opposite side of the river utilized a ferry operated by the Woods family.

The lack of a bridge between Royal and Prince created a unique challenge. Though Royal was the site of a coal mine, the Chesapeake and Ohio (C&O) main line was on the other side of the river in Prince. The railroad was the primary method of distributing coal to a much wider market. Additionally, eighty coke furnaces, which transformed coal into a more powerful fuel called coke, were set up in Prince. Laing, who served as mine foreman, devised an ingenious solution to the problem. Between 1890 and 1891, an aerial tramway was installed by the Trenton Iron Company to move coal from the mine entrance eight hundred feet above the river, through Royal, and finally on to Prince. The system was invented by German engineer Adolph Bleichert. Drawing from its installer and inventor, the system between Royal and Prince became known as the Trenton Bleichert Tramway (TBT). It was the first and only aerial system designed to transport coal in the New River Gorge.

Preparation for installation of the TBT began in 1888. A one hundred foot wide path was cleared down the mountain and about ten stone foundations were constructed. Kay, who served as superintendent of Royal after helping found the company, was an experienced Scottish stonemason. In fact, a majority of the workers and miners in Royal were immigrants from Scotland, many of whom likely came to American to escape the brutal Highland Clearances, where tens of thousands of Scots were forcibly evicted from their land. The masonry experience of Kay and other immigrants gave rise to exceptionally sturdy foundations, many of which are still standing. These foundations are especially impressive because they are dry masonry, meaning they use no mortar, concrete, or other binding agent. Wooden towers were built on top of the foundations to keep the tramway from sagging too much. Timber for the towers was sourced from the immediate area. In addition to the towers down the mountain, a separate foundation and tower was also constructed on the Prince side of the river. The gap between towers that spanned the river was 665 feet. The total one-way length from the top of the system to the bottom was 2800 feet.

At the top and bottom of the TBT were two similar buildings that served as loading and unloading points. At the top, coal was loaded into a hopper and poured into seven hundred pound buckets attached to the cable. The buckets were attached to the cable with a special clutch and could be detached for loading and unloading. Each bucket could hold a half-ton of coal. The weight of coal traveling down the mountain provided enough force that once buckets had been unloaded at the bottom, they were carried back up the mountain to be reloaded. Three drum brakes were installed as a failsafe in case the track ever began moving at unsafe speeds. The brakes were subjected to a constant stream of water, to ensure they would not overheat. The track supported a total of thirty-two buckets which reached speeds of three or four miles an hour. Theoretically, the TBT could move eighty tons of coal per hour, but in practice it rarely exceeded half of that number. In addition to coal, miners would also ride the TBT up the mountain to begin work each morning.

In 1900, a C&O bridge was built between Royal and Prince and a railroad spur line was also constructed. This superseded the need for the TBT, as a traditional tipple was cheaper and easier to use. The TBT was torn down in the early twentieth century and replaced with a coal tipple fed by an inclined conveyor. At this time, Royal was thriving. The Royal Coal and Coke Company had constructed seventy-five homes that were rented to workers and miners. A home cost $5.99 per month with an additional $1.00 due for coal. As coal miners were paid forty-five cents per ton of coal mined, a miner would have needed to extract over thirteen tons of coal each month just to pay rent. Additional services also sprang up in Royal. The town included a school, church, theater, pool hall, and even a doctor’s office. Having a dedicated physician was a rarity in the New River Gorge and most communities were serviced by travelling doctors.

Miners at Royal were particularly active in labor advocacy and union activities. In 1902, most of the town’s miners participated in a strike sponsored by United Mine Workers of America. When the coal company brought in strikebreakers to continue production, Royal residents responded with violence. Snipers stationed on the hill across from the Royal mine fired shots upon the strikebreakers in an attempt to dissuade them from continuing to work. A year later in 1903, 142 strikers from Quinnimont passed through Royal and many Royal residents joined the group. The strike marched to Stanaford, where a shootout known as the Battle of Stanaford resulted in seven dead miners. This event caused United Mine Workers of America to quit attempting to unionize New River miners.

Royal continued to produce coal until 1928, when the Royal Coal and Coke Company sold all its holdings in the area. With no employer left, the residents of Royal moved away and the town was all but abandoned. The area experienced a brief resurgence in 1936 when mining resumed under a new company, but by 1940 the Royal mine was permanently closed. Since then, Royal has been almost completely reclaimed by the surrounding forest. Only a few stone foundations and walls provide any evidence of the bustling mining industry that once defined the land. The land is owned by New River Gorge National Park and can be explored via Glade Creek Road off of State Route 41. A few interpretive signs have been erected by the National Park Service.

Cristy. The Untold Story of the West Virginia City that Vanished Overnight, Only In Your State. December 2nd 2020. Accessed May 14th 2021. https://www.onlyinyourstate.com/west-virginia/ghost-town-royal-wv/.