International Fountain at the Seattle Center

The International Fountain is a large installation that merges water elements with lighting displays and recorded music for the public to enjoy. Located on the campus of the Seattle Center, the fountain was originally built for the 1962 World's Fair, which was held at the same location. When viewed from the northern rim of the fountain (looking toward the southeast), the Space Needle landmark serves as a dramatic backdrop to the fountain's musically-enhanced water displays. The International Fountain has been described as resembling a sea-urchin with a central dome and jets that spout water in all directions. 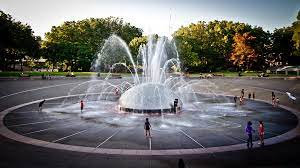 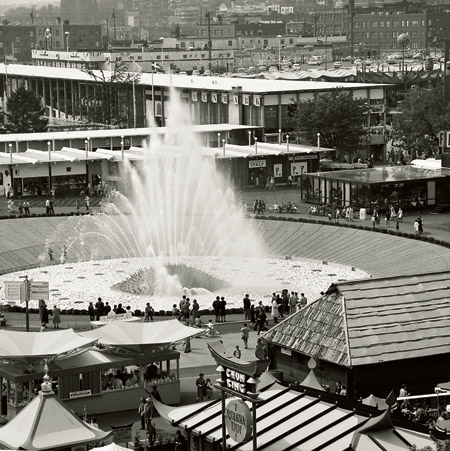 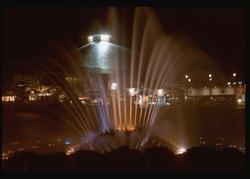 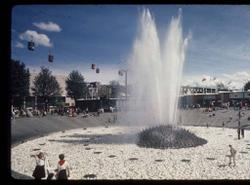 In advance of the 1962 World's Fair, the city of Seattle ran an international competition with a prize of $250,000 awarded to the winning designers of a new decorative fountain to be located at the fairgrounds. Initially, the city had considered the construction of a more traditional water basin, where gondolas could calmly float by on the breeze. Instead, the city decided to award first prize in the contest to two young Japanese architects who created an unexpected abstract, futuristic design that melded "light, water, and sound."

Kazuyuki Matsushita and Hideki Shimizu, the Japanese architects selected by the city of Seattle to design the International Fountain, grew up during the World War II era and lived through wartime bombings. Although their design of the fountain was futuristic, it has also been noted that the post-war International Fountain bears some resemblance to an underwater mine or to the engineering of a Navy blast site.

Although the history of the International Fountain can be traced to 1962 World's Fair, the fountain underwent a complete renovation and upgrade in 1995. This project cost $6.5 million. At the center of the fountain is a smooth silver dome that spouts water in timed displays corresponding to sequences of recorded music.

Visitors can sit and listen to the music while watching the extravagant water displays from around the perimeter of the fountain, or they can venture to splash in the fountain's shallow basin. Along with a light show, there are several different playlists of music, ranging from pop to rock to classical, which were created to correspond to the water displays that delight of visitors of all ages to the International Fountain.