The Winfield War Memorial, also called Victorious America, is a sculpture that was built and placed initially between Queens Boulevard and Fisk Avenue in 1926 but is now on the corner of 65th Place and Laurel Hill Boulevard. Its purpose is to commemorate seven men who came from the town of Winfield and served in World War I. The monument was sculpted by James Novelli and was sponsored by the Winfield Honor Roll Association.

Front view of the sculpture 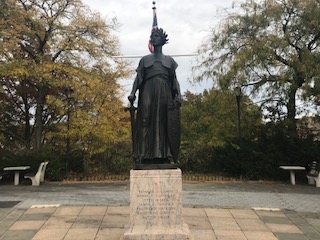 Flagpole behind the sculpture 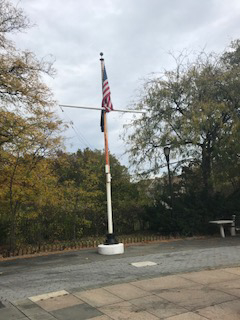 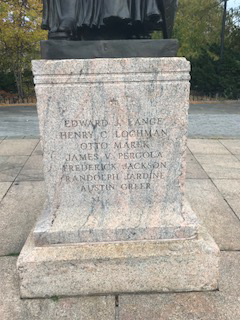 The sculpture is of a woman in a medieval type of dress, a shield in her left hand and a sword in her right. It stands at seven feet tall in a victorious pose staring into the distance. The Winfield Honor Roll Association says that she is a “symbol of protection, good government and honor.” A pole in the shape of a cross stands behind the sculpture with an American flag hanging at the top.

The woman stands on a pedestal made of granite engraved with the names of the seven men from Winfield who served in World War I. The names are Edward J. Lange, Henry C. Lochman, Otto Marek, James V. Pergola, Frederick Jackson, Randolph Jardine, and Austin Greer. The shield she is holding has the following inscribed on it: "DEDICATED TO THOSE WHO MADE THE SUPREME SACRIFICE AND TO ALL OTHERS FROM WINFIELD WHO ENTERED THE SERVICE OF OUR COUNTRY IN THE WORLD WAR NEW YORK CITY AD MCMXXVI"

The town was originally named Winfield, after war general Winfield Scott, who participated in the War of 1812, the Black Hawk War, and the Mexican War. He served in the army for 53 years and was regarded as the longest active-duty general in United States history.The statue initially resided in what was called Winfield Plaza when it was first built but was eventually moved in 1939 due to the construction of a highway.

The memorial has suffered a ton of physical damage over the years. It’s had to go through the effects of weathering and was repeatedly being covered in graffiti. Being next to a highway ramp, it has been hit by cars on three different occasions, two of the times it was knocked off its perch and the third time, in 2001, the monument's head was severed from its body. It was restored after each incident. After the car accident in 2001, the monument was held in a Parks Department vault and was pieced back together and placed back in its original spot in 2011.