Constructed in 1890 as the Squire-Latimer Building, this office building soon became home to Seattle's Grand Central Hotel. The business accommodated travelers passing through Seattle on their way to the gold rush in Canada following the start of the Klondike Gold Rush which began in 1896 when gold was discovered in a tributary in Canada's Yukon Territory. In the first year, an estimated 20,000 to 30,000 people traveled to the Yukon to strike it rich finding gold. A portion of the tens of thousands traveling through port cities went through Seattle. This marker shares the history of the hotel which operated for several decades and serves as a reminder of the impact of the gold rush on the city's history.

Photograph of the front of the Grand Central Hotel. 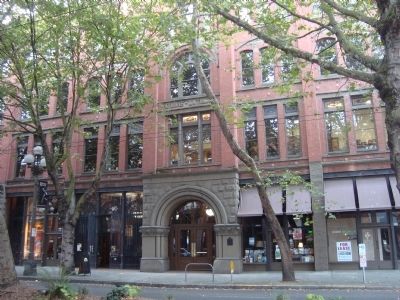 Photograph of the historical marker on the Grand Central Hotel. 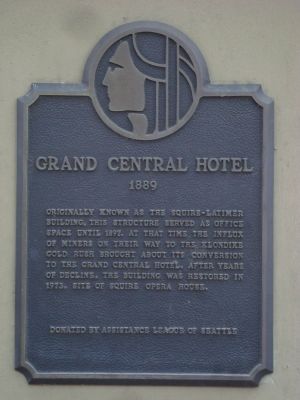 Constructed between 1889 and 1890, the Grand Central Hotel, originally known as the Squire-Latimer Building, was used as offices until 1897. Lawyer and investor Watson Carvosso Squire and Norval H. Latimer, a banker, co-owned the building. The Squire-Latimer Building was built on the site of Watson Squire's Opera House, which opened in 1879 but was destroyed in the Great Fire of 1889. In 1907, however, the building was converted into the Grand Central Hotel because it became a hotel during the Klondike Gold Rush. In 1896, Skookum Jim Mason, Dawson Charlie, and George Washington Carmack found gold in a Klondike River tributary in Yukon Territory in Canada. This discovery set off a gold rush. In 1897, people flooded Seattle for its port on their way to the Yukon and needed accommodations. The current name, the Grand Central on the Park, comes from the name Grand Central Hotel. An estimated 20,000 to 30,000 people seeking gold went to the Yukon. By 1898, however, the most of the gold rushers returned home, and the fortunes of the Grand Central Hotel followed suit as business moved away from this part of the city.

The hotel continued to operated for several decades after the short-lived gold-rush, but it was not well-maintained and like many downtown Seattle buildings in the 1960s had fallen into a state of disrepair. In the 1970s, the building was restored by Richard White, Alan Black, and architect Ralph Anderson. The building is again used as office space and has shops on the lower levels reflecting the return of business to Seattle's downtown as a result of a new boom in the Pacific Northwest.

Image by Bill Swackhamer at the Historical Marker Database.

Image by Bill Swackhamer at the Historical Marker Database.