The Ronald N. Davies Federal Building and U.S. Courthouse as it appears today 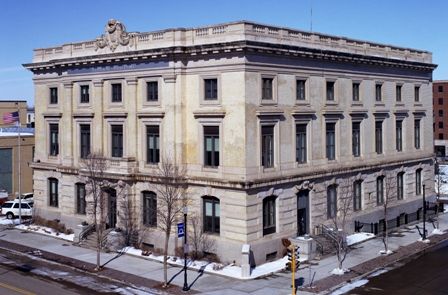 Judge Ronald Davies on the cover of an issue of Newsweek (1957) naming his actions regarding the Little Rock (AR) School Board as the "landmark decision on racial integration in our nation." He nullified the injunctions made by the Pulaski County Cha 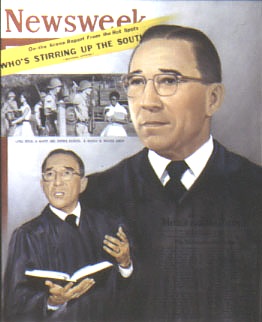 Ronald Davies in 1957 shortly after his actions towards the Little Rock School Board. 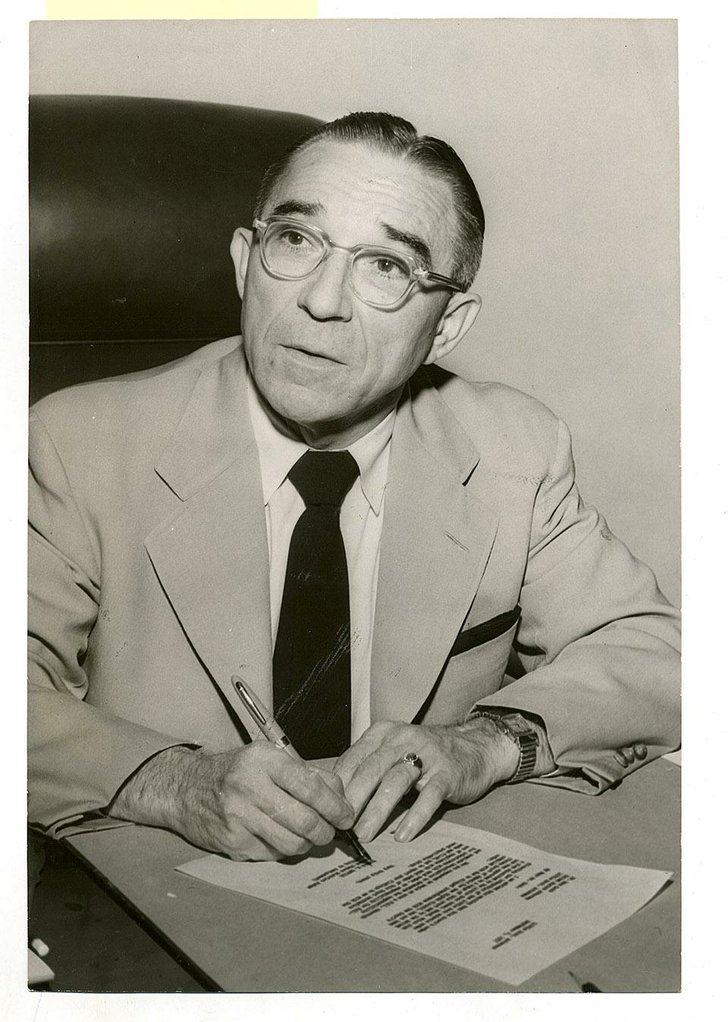 "The building was among the first monumental civic buildings in Grand Forks. Originally completed in 1906, the building was envisioned to be a majestic Post Office and Federal Courthouse at a time when Grand Forks was achieving increasing prominence in the agricultural hub of the Red River Valley. The city's existing post office, housed in an 1870s log cabin, had become obsolete and rising political and business influences demanded a more monumental and permanent post office and courthouse. The new Federal building was sited at the north corner of Fourth Street and First Avenue in the downtown business district.

In 1936, the demand for more space prompted the construction of a three-story addition to the rear of the building, designed by Louis A. Simon of the Supervising Architect's Office. The addition harmonized modern infrastructure with the original architecture by using like materials and details. The new configuration included passenger elevators and a light well to illuminate the first-floor work areas. In 1964, when the U.S. Postal Service moved out of the building and into a new, larger facility, interior renovations remodeled the first floor into offices, adding a new stair tower to the north side of the building.

In 2002, the building was renamed after Federal District Judge Ronald N. Davies. Judge Davies served in the municipal courts in Grand Forks from 1932–40, and was appointed by President Dwight D. Eisenhower as the U.S. District Court Judge of North Dakota. Most notably, Judge Davies presided over the Stromsodt v. Parke-Davis and Company case in 1966, a case that involved a damage suit against one of the nation's largest pharmaceutical manufacturers.

The Ronald N. Davies Federal Building and U.S. Courthouse reflects James Knox Taylor's mannered use of classicism to create an imposing architectural statement of the Federal Government's presence in Grand Forks. The building is a three-story, rectangular, masonry structure of yellow brick and limestone detailing that creates one of the most prominent displays of Beaux-Arts Classicism in the city. Federal Government architects embraced classicism during the early twentieth century as a method of symbolizing democratic ideals of government and power. The distinctive style is exemplified in the building's symmetry, central emphasis, and classical ornamentation.

On the facade, the most elaborate decorative features are reserved for the centralized three-bay section. Like the secondary elevations, the facade is composed of three horizontal zones. A rusticated base of alternating bands of limestone and brick courses is differentiated from the smooth limestone walls of the upper stories, which form the middle zone. The upper stories are articulated fenestration framed by colossal Tuscan order pilasters. The third zone is defined by the entablature, including a blank frieze surmounted by a heavy dentil molding, projecting cornice, and balustraded parapet, composed of alternating balusters with raised panels. A large festooned cartouche at the parapet is a crowning feature of the central bay's vertical axis.

Refined Beaux-Arts embellishments accentuate the facade's key features. The main entrance is prominently centered and framed by a segmental arch bedecked by a keystone and festooned swags, and banded pilasters, which support an 'audience balcony' above.

The interior public spaces are monumental in scale and classical in detail. The first-floor entry lobby, while reduced in size from its original configuration, retains its 16-foot ceiling, featuring a cast-plaster cornice, moldings, soffits, and modillions. Marble adorns the walls and window sills. A central marble staircase with a richly ornamented cast-iron balustrade ascends from the first-floor lobby to the upper floors. The second- and third-floor finishes are generally unchanged from their original condition, consisting of white marble wainscoting and green marble base and trim. Second- and third-floor public corridors have coved ceilings with cast-plaster picture moldings at the spring line.

The courtroom - with monumental proportions - represents a dignity apropos of its function as a Federal courthouse. Its coffered, 24-foot ceiling features dentil molding, modillions, and plaster acanthus leaves and buds that grace each coffer's perimeter. The walls are divided by wood wainscoting surmounted by raised plaster panels with molding surrounds. Windows extend upwards from the wainscoting and are partially trimmed on three sides with cast-plaster acanthus leaves matching those on the ceiling. From its earliest period, the courtroom has been carefully preserved. When the judge's bench and jury boxes were relocated from the east to the west wall in 1936, the alterations to the wainscoting, plaster ceiling details, and the wall panels were painstakingly matched to existing 1906 finishes.

Because few older buildings in the city's central business district have survived unmodified, the Ronald N. Davies Federal Building and U.S. Courthouse stands as an unusual example of a monumental structure essentially unaltered. As it has for the past century, the building today represents the Federal presence and stands as a visual focus and historic architectural antecedent in downtown Grand Forks."