The Netherland Plaza Hotel was built between 1929 and 1931 and quickly became the center of Cincinnati's social scene with its French Art Deco architecture and an interior filled with frescoes and murals. The hotel is also part of the Carew Tower Shopping Arcade and Office Tower complex which includes dozens of retail stores and restaurants in addition to office space. The Netherland Plaza became a National Landmark in 1985 and is also a member of Historic Hotels of America.

Firefighters pose outside of the Netherland Plaza. The hotel was damaged in a 1942 fire that resulted in the loss of its iconic chandelier. 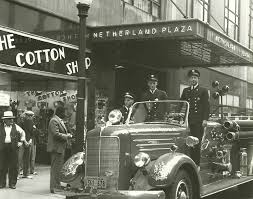 The hotel opened in 1931 and remains one of the most iconic downtown buildings in Cincinnati. 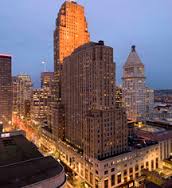 The beginnings of The Netherland Plaza 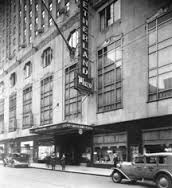 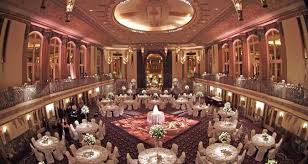 Carew Tower and Netherland Plaza Hotel were constructed to be a “city within a city" and offer a combination of retail and office spaces anchored by a destination luxury hotel. In August 1929, plans for the Netherland Plaza Hotel and Carew Tower were announced, and the project was completed in January 1931. Financing for the building came predominantly from the Emery Family who made their fortune in processing the byproducts of Cincinnati's stockyards.

John Emery hired Walter Ahlschlager and Colonel William Starrett to begin construction on the hotel. Starett had previously designed the Lincoln Memorial and the Empire State Building, while Ahlschlager had been involved in the design of the Peabody Hotel in Memphis and Hotel Intercontinental in Chicago. Emery financed the project by liquidating his entire portfolio which appeared foolish to many in the fall of 1929 but insulated him and the project from the stock market crash. While construction projects financed by banks were cancelled in the wake of the crash and failure of many leading banks, Emery was able to continue his project. As banks failed and the construction of nearby buildings stopped, plans for this hotel moved forward quickly as Emery became one of the city’s largest employers.

Emery initially decided to name the hotel the St. Nicholas in reference to a previous luxury hotel that had been the center of Cincinnati social life, but the competing Cincinnati Realty Company filed an injection claiming that they had acquired the rights to that name when the old St. Nicholas Hotel closed. As a result, Emery selected a new name, St. Netherland Plaza, a reference to the location of the hotel in the space between the surrounding hills and the Ohio River.

While Emery's liquidation of his portfolio insulated him from the stock market crash, the ongoing effects of the Great Depression reduced the number of traveling guests and locals who could afford the luxury hotel and its banquet facilities. Despite the downturn, the hotel's grand opening in January 1931 was a celebration of luxury and technology, including the hotel's automatic garage doors and high speed automatic elevators. While business was slower than projected owing to the Great Depression, the hotel became the center of social life with nightly jazz music filling the lobby.

Like many leading hotels, the Netherland quickly rebounded as employment and wages increased as the nation's factories reached full employment owing to the production of armaments, first for the Western Allies under the Lend-Lease Act and then for the U.S. military. Disaster struck in 1942 when a fire and the resulting water damage from the effort to extinguish it destroyed much of the hotel's interior.

The hotel was remodeled in the 1960s to try to match the modern appearance of many newer hotels. The hotel saw a decline in business in the 1970s and 1980s as business moved away from the center of downtown and travlers opted for hotel chains located near the interstate. However, given the centrality of the hotel to the city, investors dedicated funds to renovation, including an effort to restore many aspects of the hotel to match its original appearance. The building was added to the National Register of Historic Places in 1985 and was operated by the Omni hotel management company until 2002 when it was acquired by Hilton.