Item 11 of 13
This is a contributing entry for CVB Downtown Historic Buildings Walking Tour and only appears as part of that tour.Learn More.

The Despard Building was constructed in 1877 and originally hosted the Wells & Haymaker Drug Store. Funding for the building came from the Despard family in Clarksburg. Colonel Burton Despard was instrumental in Clarksburg’s economic development in the mid to late nineteenth century. Colonel Despard maintained a law practice with Edwin Maxwell, and also owned a number of early coal mines in the area. The Despard family continued to develop land and businesses after the colonel’s death in 1874. In contrast to some other Italianate buildings in the district, the Despard Building focuses on horizontality rather than verticality. Six bays of windows grace the façade of the structure, though these days the building has been separated into a two-bay and a four-bay storefront. Both sections of windows have the same elongated form and Victorian decorative molding. The left storefront features a dentilled cornice, while the right storefront has an unornamented cornice. The first-floors of the building have been completely reimagined and the second floor has been repainted, each storefront with a different color. Though the building has been somewhat fractured due to the disparate sections, the basic form remains intact. 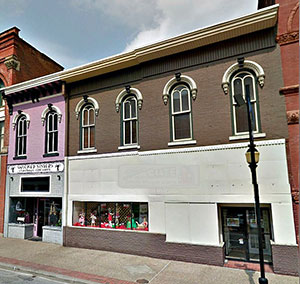