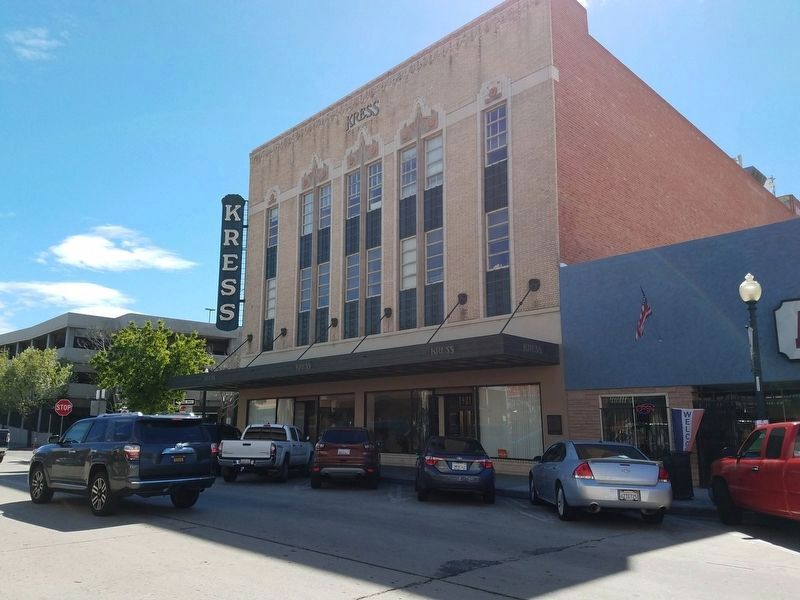 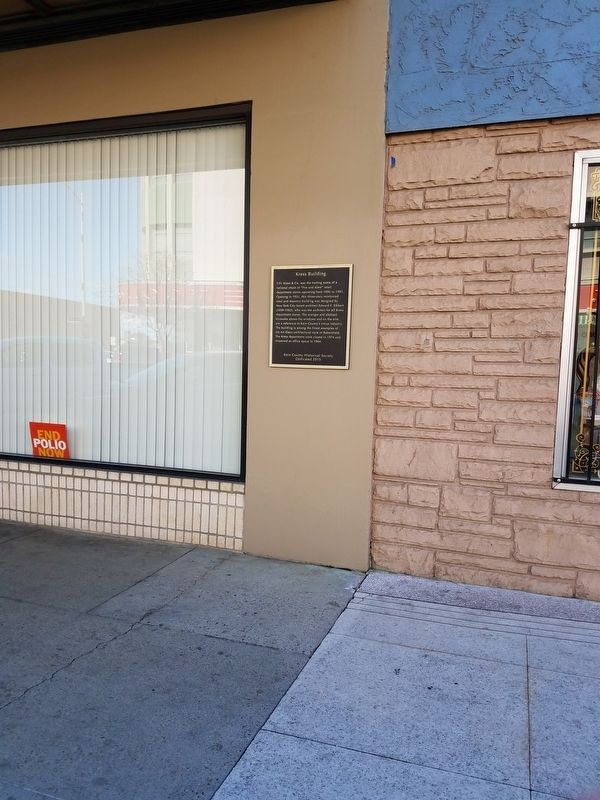 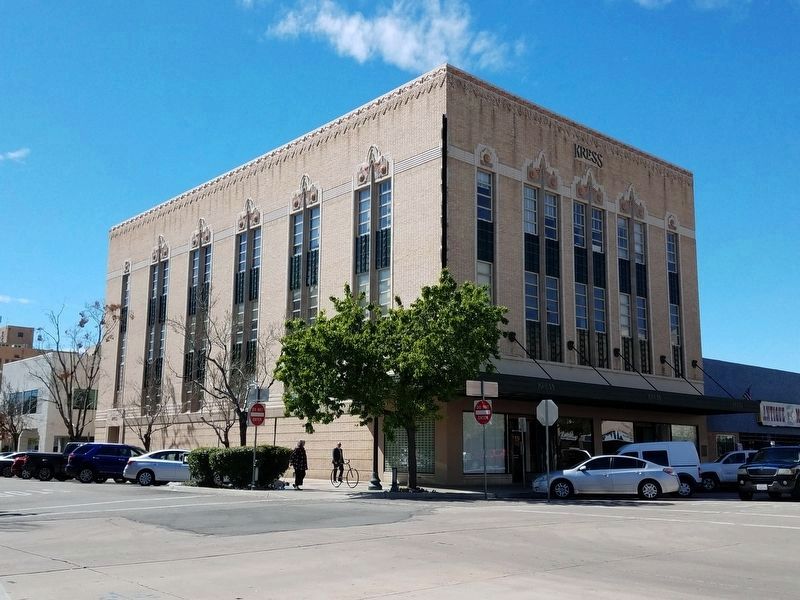 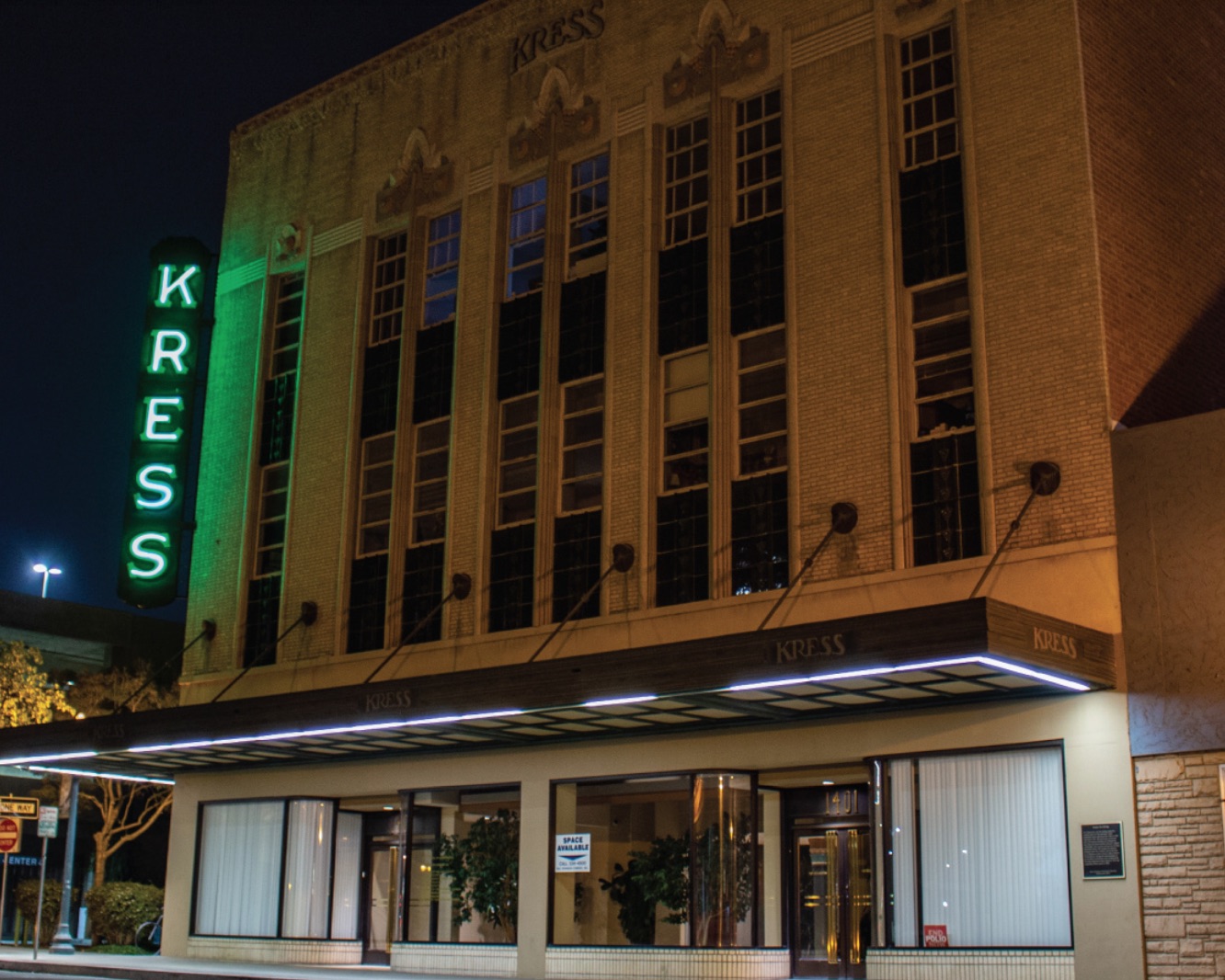 Built in 1931, the Kress Building was designed by the New York architect, Edward F. Sibbert, in a Modern Art Deco style. It is comprised of three stories of reinforced steel with masonry. The building features strong, clean lines, juxtaposed with elaborate moldings. Kress & Co. stores were known for their innovative architecture. Above the windows and trim, abstract flower blossoms and oranges appear as exterior masonry decorations. These blossoms and oranges are a reference to the citrus industry in California. A curved canopy extends along the building's east and north sides.

The company's founder, Samuel H. Kress, viewed each of his store buildings as public works of art. He hired staff architects, such as Edward Sibbert, to design his store buildings, which ranged in style from Art Deco to Gothic Revival. Over the course of Sibbert's career, he designed fifty Kress buildings in major cities across the U.S. Building locations were also carefully planned prior to construction. Kress stores were intentionally situated close to downtown public buildings such as libraries, post offices, and city halls, since these were considered essential aspects of a thriving city. The distinctive architecture helped to define the brand and to differentiate Kress & Co. from its competitors.

As a five-and-dime retailer, Kress stores sold mass produced, essential household items and other goods at a discount. Also known simply as "dime stores," Kress & Company stores were in direct competition with another popular dime store chain, the F.W. Woolworth Company. As in many other U.S. cities, this competition was evident in Bakersfield, where the two retailers were located directly across the street from each other. They sold similar products, and both featured luncheonette counters where customers could dine. Over time, each company expanded its prices on items beyond the ten-cent limit in order to keep up with the rate of inflation.

Samuel Kress was born in 1863 in Cherryville, Pennsylvania, where his father worked as a supervisor in a coal mine. When he reached adulthood, his first career was in teaching. Next, he opened a stationary store. When his vision for Kress & Co. began to take shape, it took a cue from its competitor, the already popular Woolworth's chain of retail stores. The first large Kress & Co. store was opened in Memphis, Tennessee. Despite, or perhaps because of, the competition with Woolworth's, Kress always admired Frank W. Woolworth. In a highly unusual business decision, when Frank Woolworth died, Samuel Kress closed his own stores for the day as a sign of respect. Although Kress & Co. eventually went out of business in 1980, the historic Kress Building in Bakersfield has been preserved. It remains across the street from the historic Woolworth Building, which has also been preserved.