The History Center of Cheboygan includes different buildings that help exhibit Cheboygan’s history. Originally the location of the old jail and jailer’s residence, this location has been an important part of Cheboygan’s history since 1880. On these grounds, visitors can find the old jail and jailer’s residence building, an exhibit building and a native American log cabin from the late 1800’s.

This location has been an important part of Cheboygan’s history since before it was first settled. Currently the site of the Great Lakes Tissue Company, this is the location where the first sawmill was built in Cheboygan. As the first business to be set up in the area and because of the important history the area has had with the lumber industry, this site has been crucial to the development of Cheboygan.

The Carnegie Library was Cheboygan’s first official free library. It was housed at this address from October 1913 until May 1966. The initial funds, $15,000, came from a grant given by Andrew Carnegie, a steel magnate who was one of the richest Americans in history. After the library closed, the Cheboygan Board of Education occupied offices in the building along with several other small businesses. The building spent some time vacant and in more recent years is being used as a community center holding concerts, art galleries and other events. 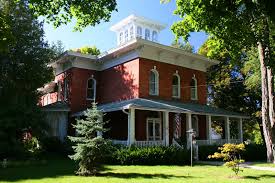 Built in 1871, the Newton-Allaire House is a private residence that holds historical significance in Cheboygan. The house was designated a Michigan State Historic Site in 1979 and was listed on the National Registry of Historic Places in 1983. This 8-bedroom, 2 ½ bath Italianate, 2-story red brick house includes a wrap around porch, wide eaves and rounded arch windows. The house is a wonderful representation of affluent life in 19th Century Cheboygan.

Frank Kingston opened his Kingston Theatre on March 22, 1920 in downtown Cheboygan. Although there were many other theaters in the area, the Kingston stood out because of its grand size and beautiful Art Deco style architecture. The original theater played movie reels and live performances. There are no longer live performances here, but the theater has expanded to 5 screens.

The Ottawa Hotel was one of the grandest hotels in the area for it’s time. It sat at the corner of State and Main Street, the busiest intersection in the city of Cheboygan for more than 100 years. After being torn down, the lot where the hotel once sat now has a community park that is a modern-day outdoor art exhibit.

Gordon Turner Park lies on the shore of Lake Huron, at the mouth of the Cheboygan River. Named after a local journalist who held special regard in the area, the park includes a large wooden playscape and other playground equipment, a picnic area, a large swimming beach on Lake Huron, a boardwalk that leads to the Cheboygan Crib Light, and a walking trail that leads to an overview of the wetlands.

Founded in the mid 1800s, Cheboygan has many interesting historic sites to visit. This historic walking tour will take you to some of the most important locations in Cheboygan’s history, including the Paper Mill, the Old Jail, the Opera House, and the Kingston Theatre.