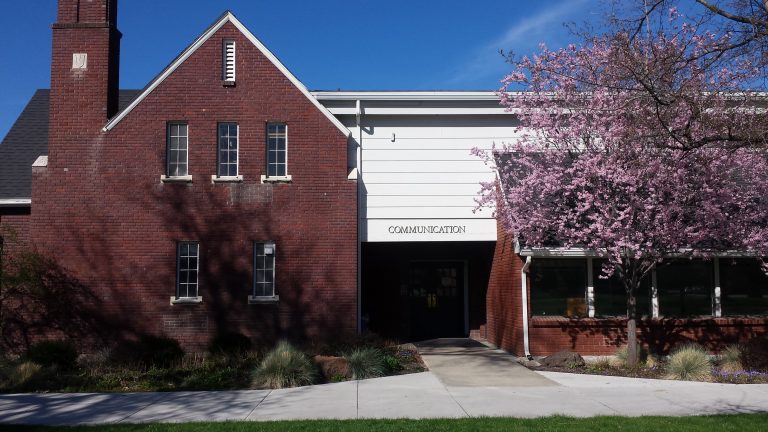 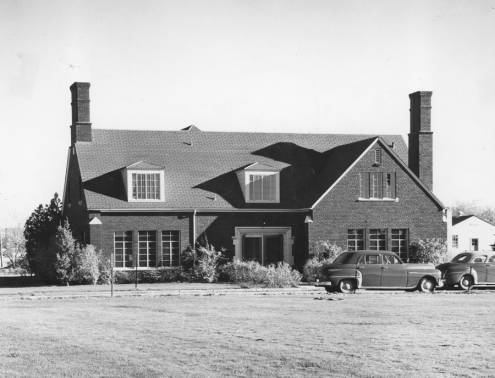 North entrance to the Communications Building 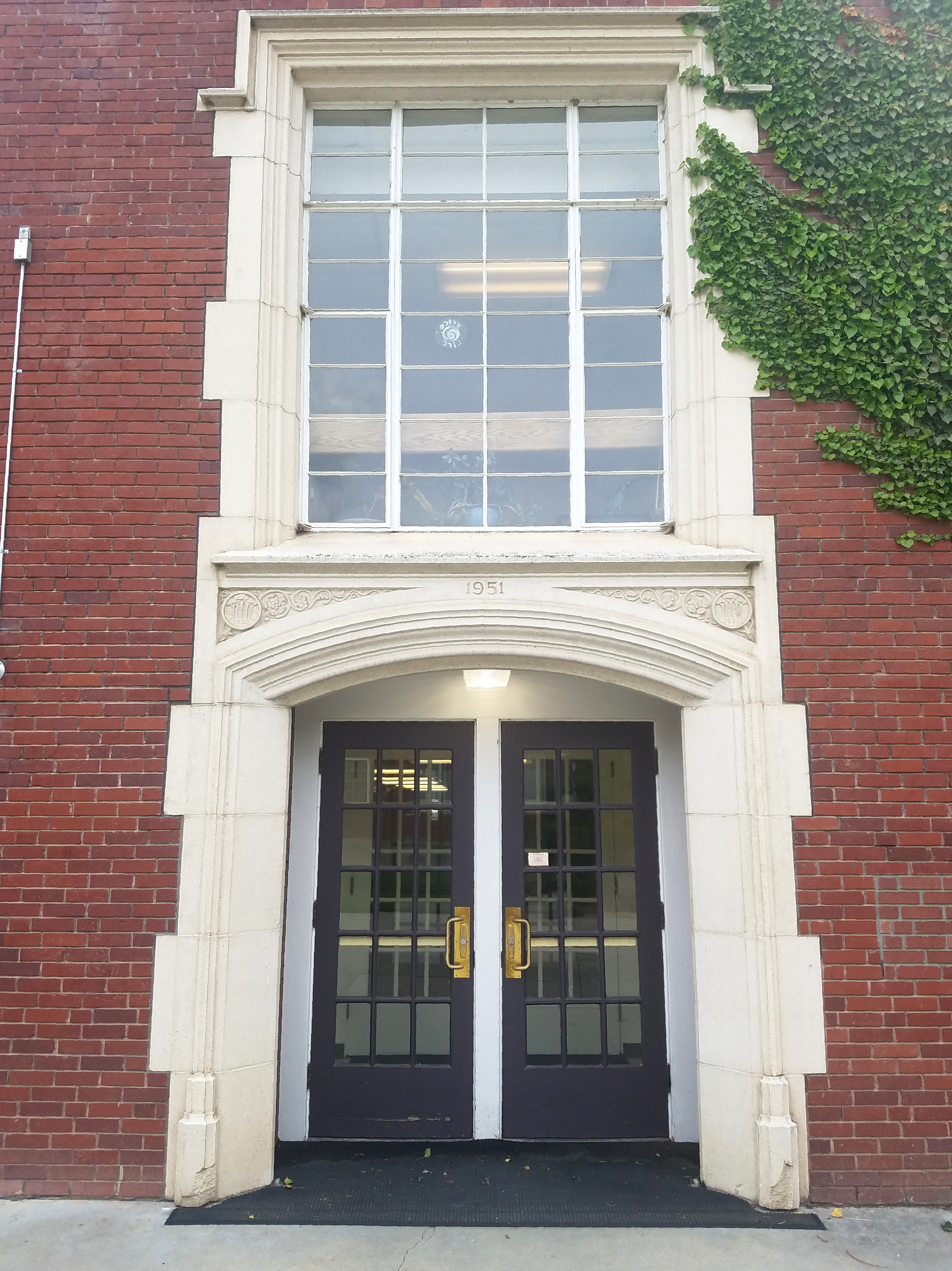 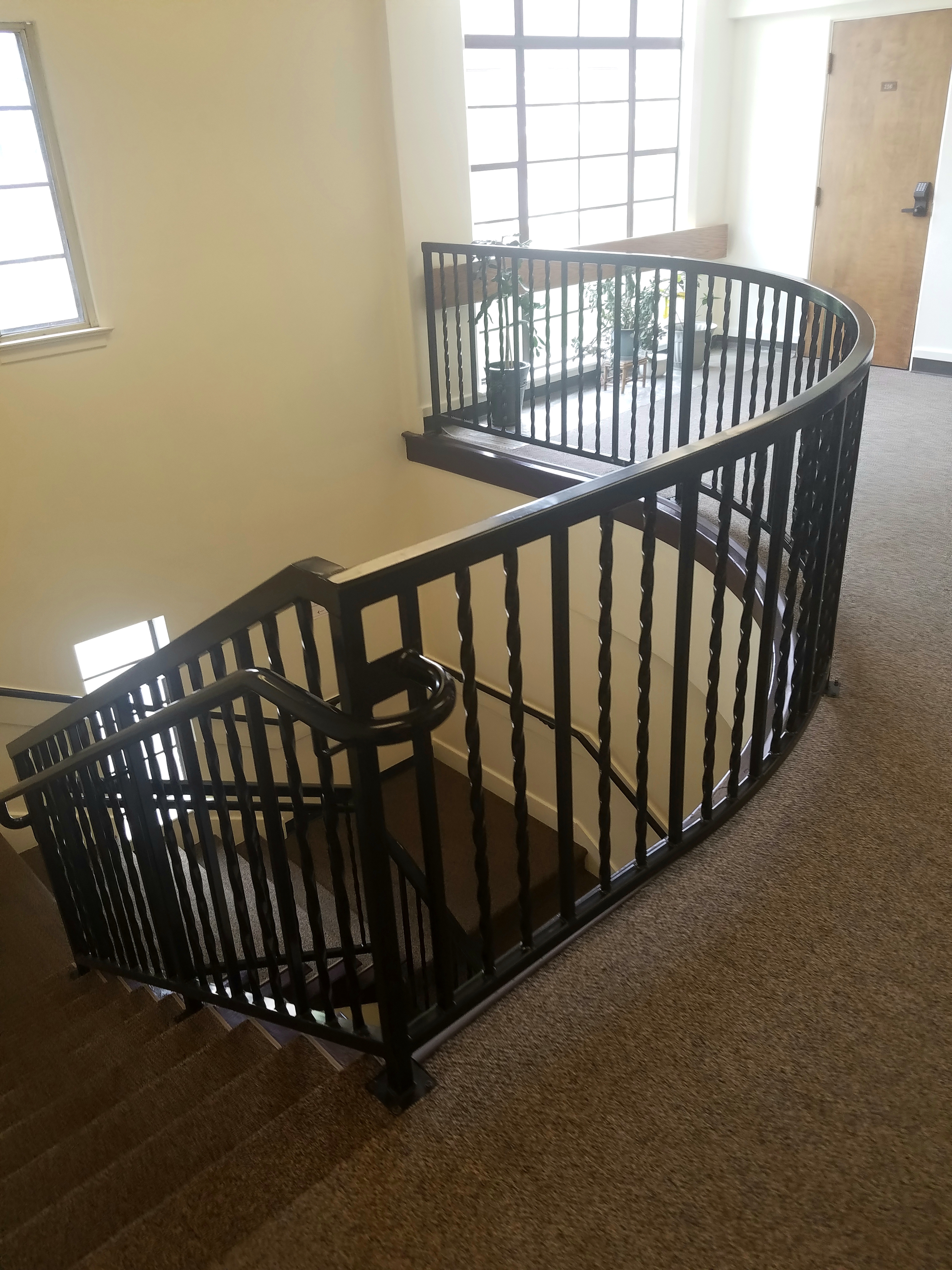 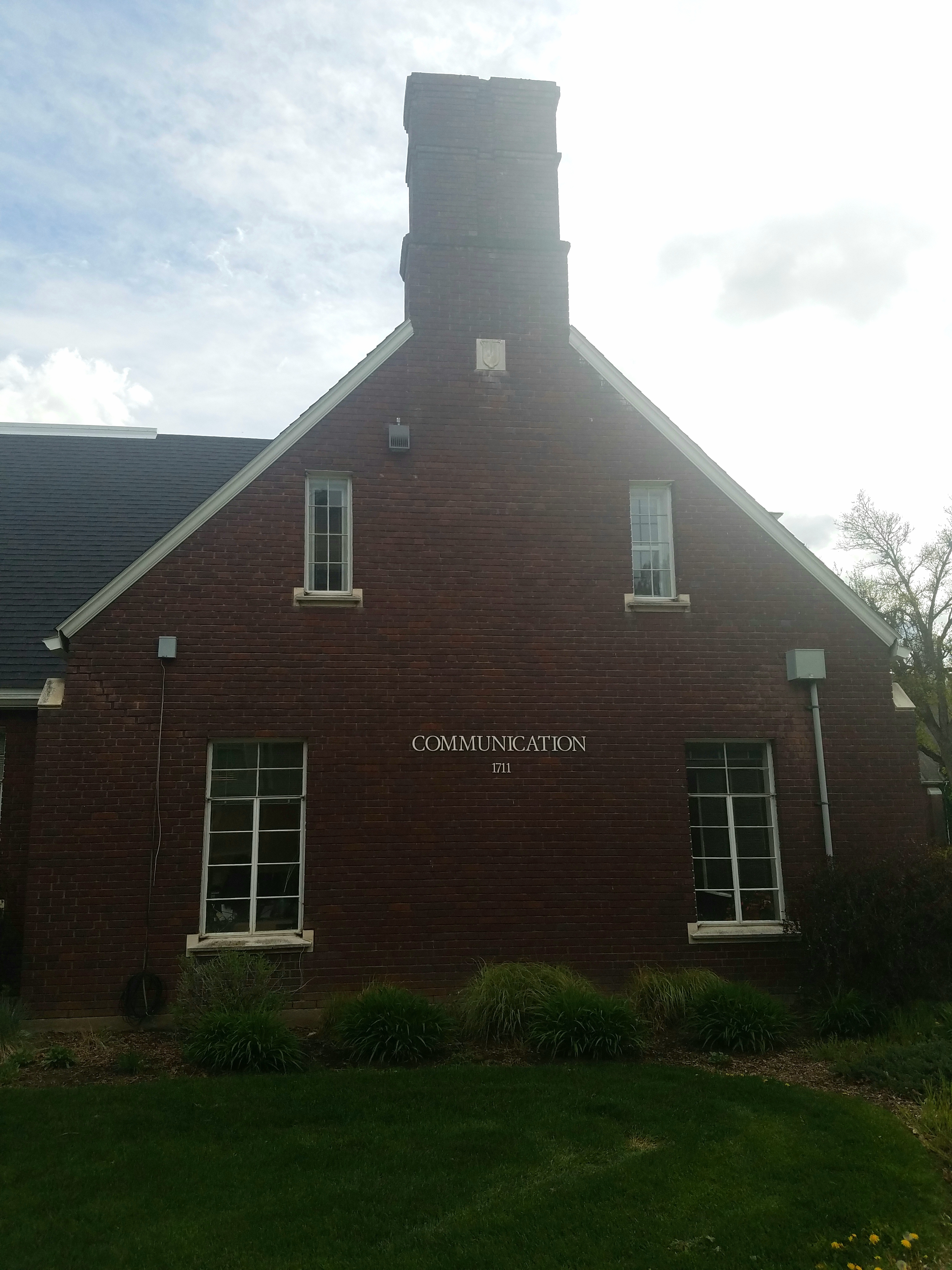 The Communications Building was one of the first buildings on campus. The neo-Gothic collegiate modern building was constructed by Hummel & Hummel Architects in conjunction with the WPA (Works Progress Administration) and opened on March 3, 1942 and cost $28,000 (in 1940s dollars) which equates to about $67,000 now.1
The original purpose of the building was to be a place for students to relax and socialize, it was the original Student Union Building until the mid 1960s.
Some architectural features include mostly swinging doors throughout the interior of the building with double French doors on the North facing entrance. Above the French doors is an overdoor with ornamental carvings in the stone; trees above the date 1932 are in a circle in the top left corner, 1951 is in the middle, and trees above the date 1951 are in another circle in the top right corner. Multiple pane windows surround the building and are original. The window above the North entrance contains 32 panes, while some contain 8 or 3 panes. The building is constructed of red brick which matches most of the other buildings on campus.
The cornerstone of the original Student Union was laid in November 1941 and the building opened in 1942. Overcrowding forced students to build a new union at its current location in 1967, and the building was renamed the Music-Drama Building. In 1984 the building was remodeled and added on to and became the Communication Building.6
During the 1940s few buildings were built due to the war. Due to the campus gaining popularity and Boise gaining popularity as a good place to settle down a raise a family, more students enrolled which caused a need for more structures to house classrooms and provide relaxing social environments.2
Soon after the construction, Friday night dances were held (and even taken away for student misconduct a few times) in the ballroom. Many historical images show students laughing, talking, and smoking cigarettes. In 1945 it was considered the nicest Student Union building in the Northwest, which was unusual for Boise State University's small campus at the time. It contained a jukebox, soda fountain, and a homey lounge that created a pleasant atmosphere that attracted students during their free-time.4
After 1967 a new Student Union Building was built and the old Student Union was renamed Subal Theater, or the Music-Drama Annex. At the time it provided expanded classrooms, practice, and recital facilities for music students; speech and drama laboratory facilities; and a radio broadcast studio known as KBSU. The Subal Theater held many plays including A Midsummer Night's Dream, The Seven Deadly Sins, Tartuffe, Macbeth, and The Servant of Two Masters.3
One of the most intriguing stories about the Communications Building is that it is haunted by a ghost named Dina from the 1940s. Legend has it that Dina had a boy picked out for prom and when she asked him to go he refused and said he had other plans. She decided to go alone and upon arrival discovered the boy with another girl. This upset her profoundly and drove her to take her own life, some say by cutting her wrists, others say by hanging herself in the women's bathroom by room 226. Faculty and students have claimed to hear the piano in the building playing "London Bridge," and "Someone's in the Kitchen with Dina" when nobody else is in the building. They have also claimed to see DINA written on chalkboards and in lipstick on the mirror in the women's bathroom. Other signs of Dina include footsteps, stage-lights moved and dimmed mysteriously, teachers name plaques flipped upside down, and a woman's laughter.5 More recent hunts for Dina have been conducted through local news reporters and professional ghost hunters who have also claimed that there is a supernatural presence in the building.