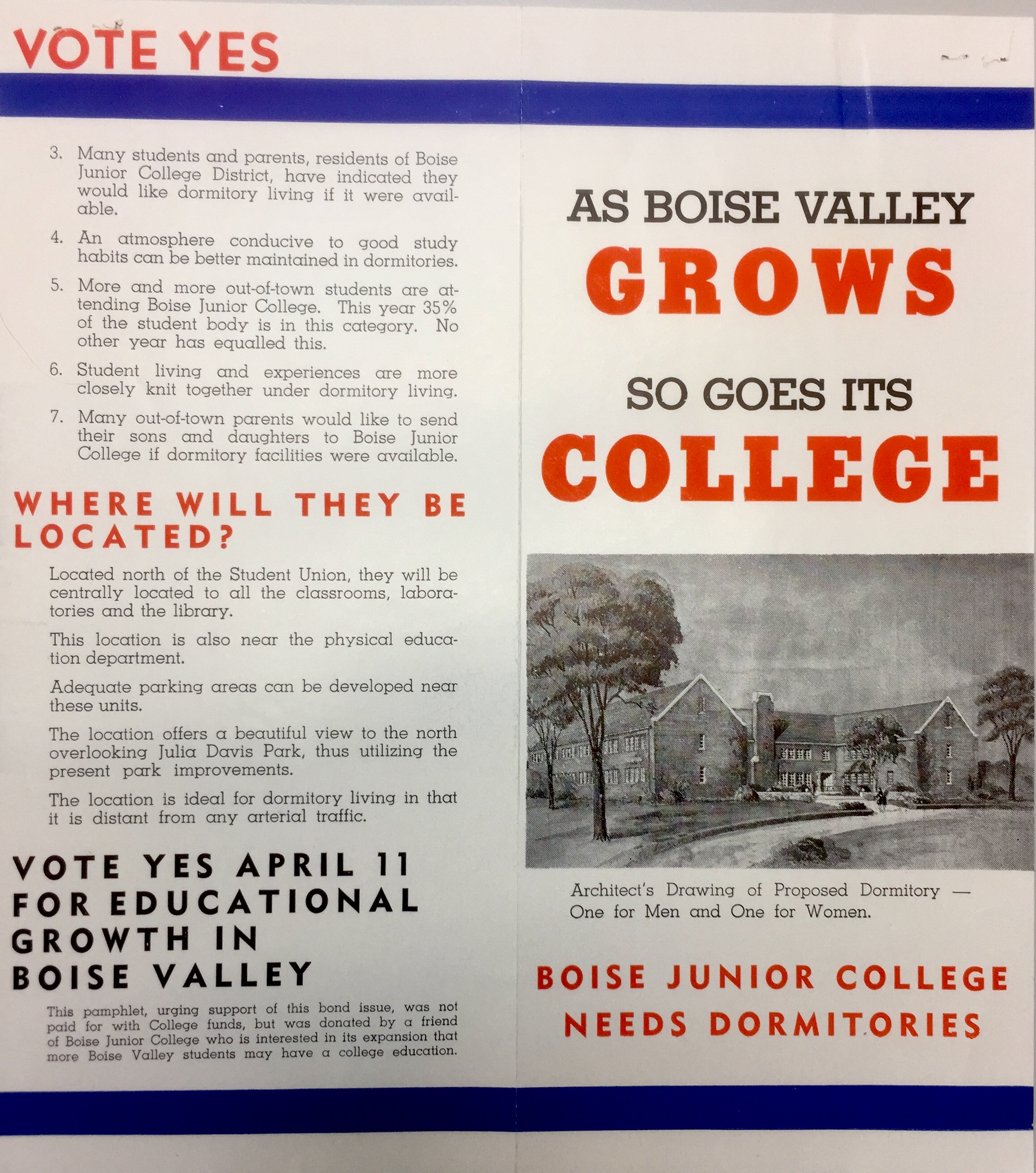 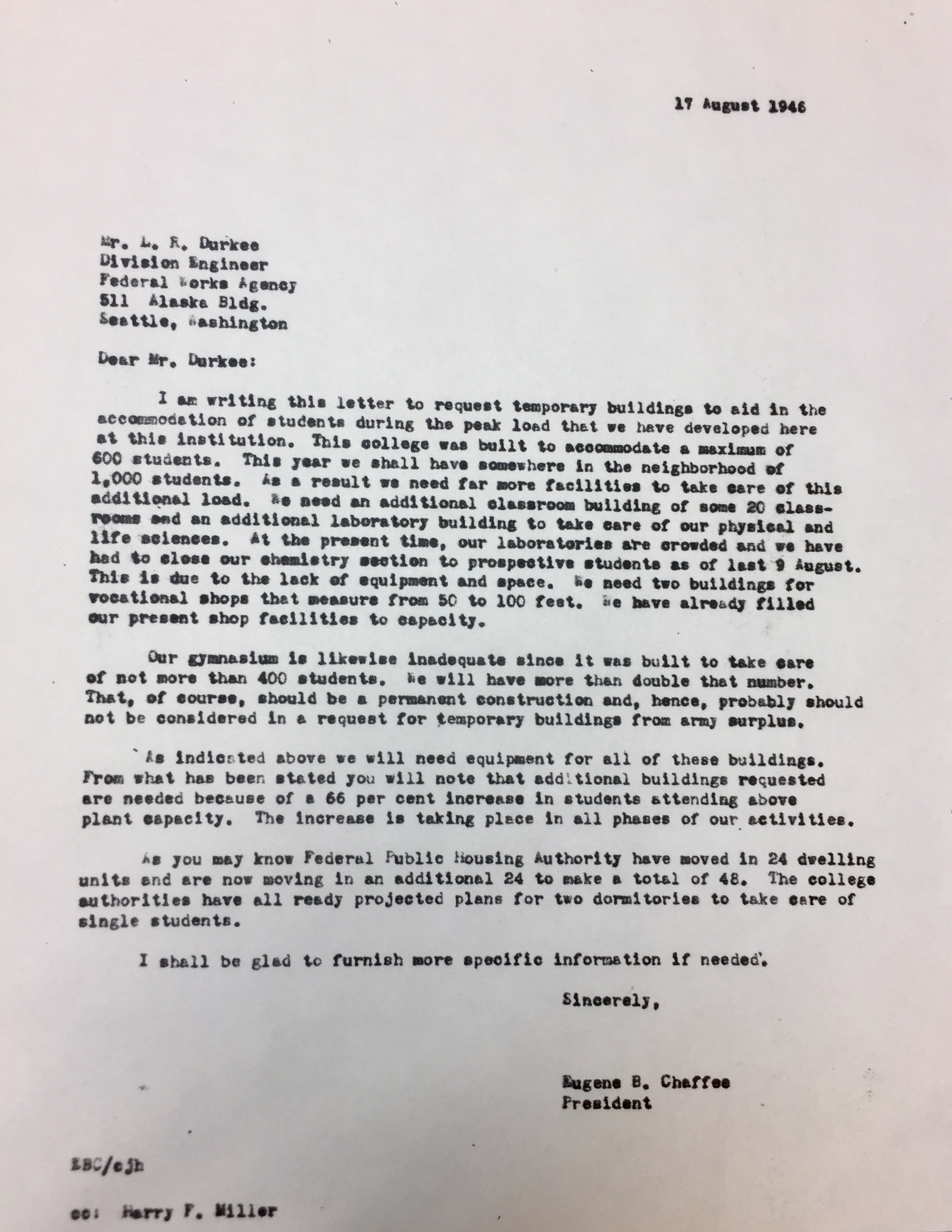 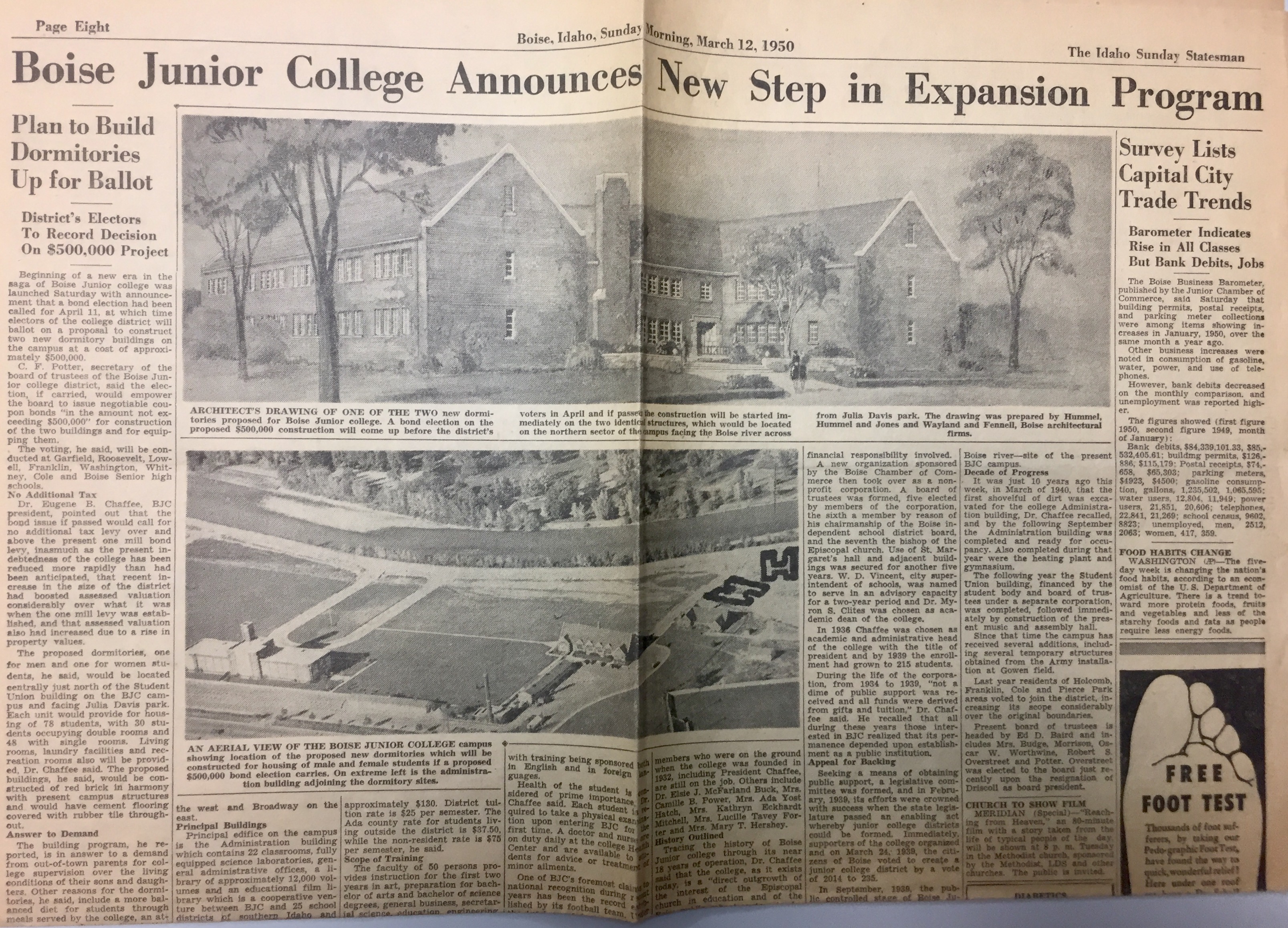 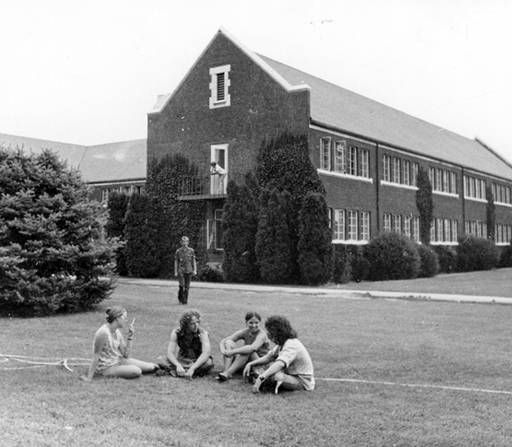 Side View of Morrison Hall 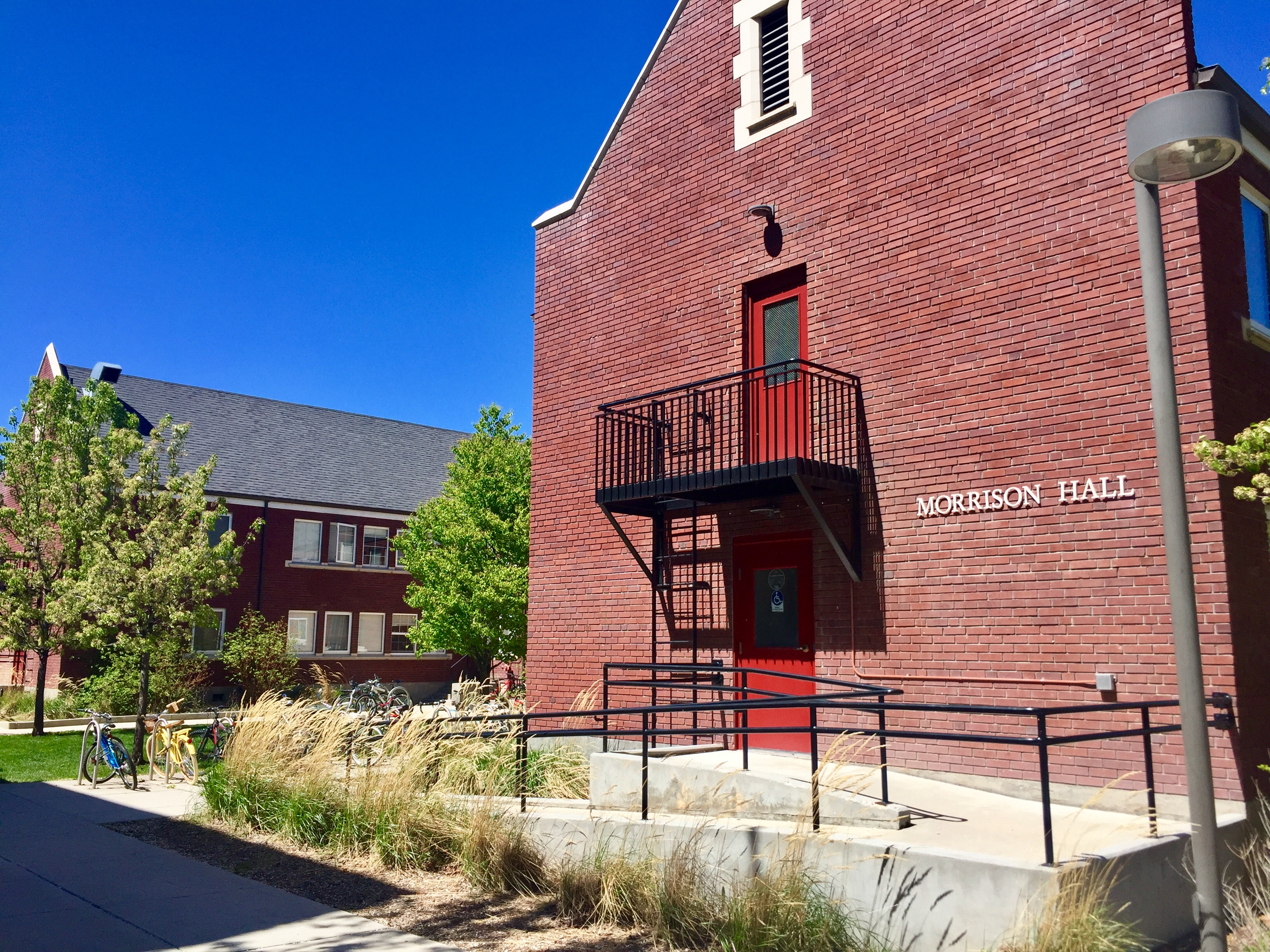 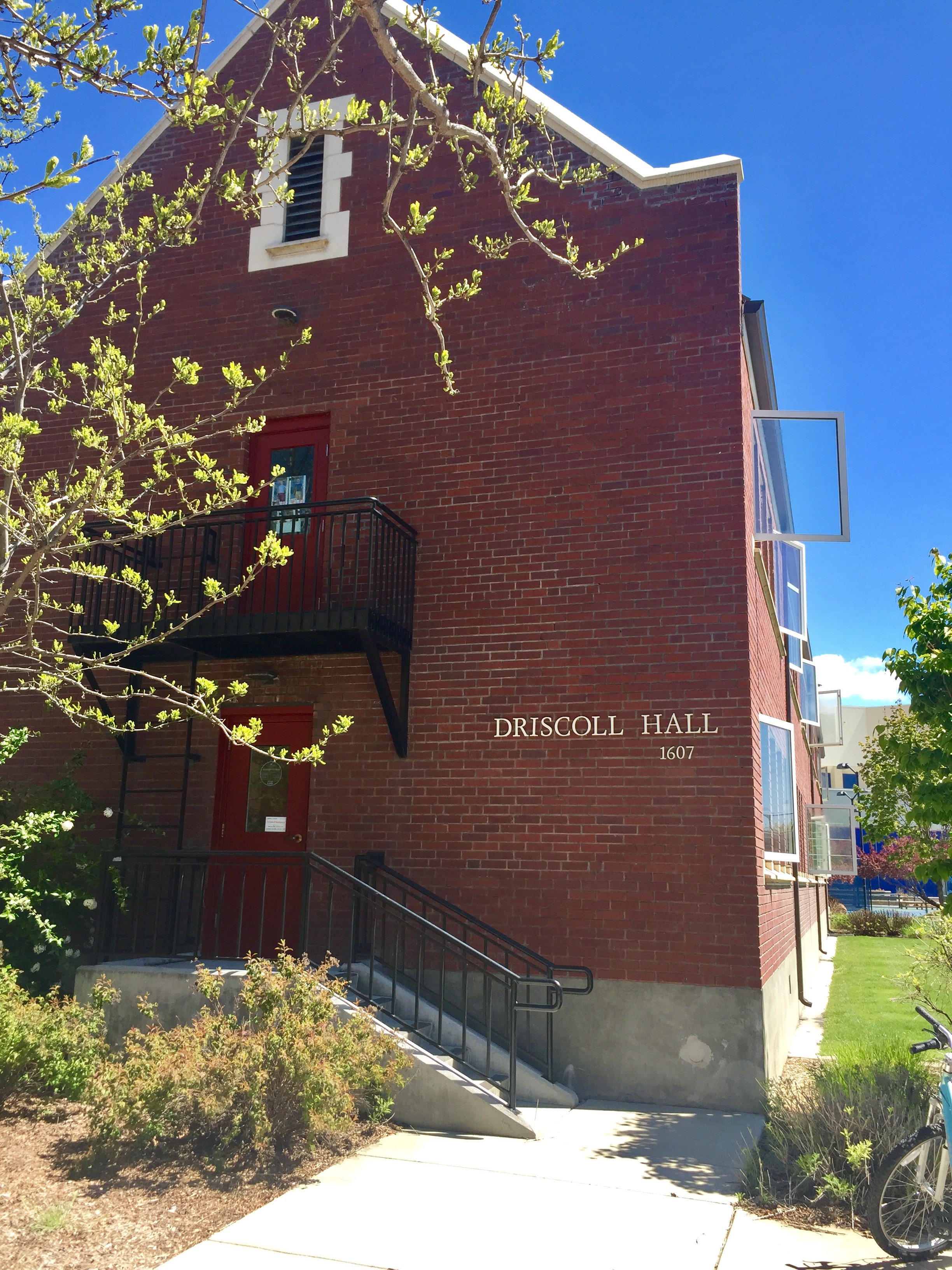 Located directly north of the original Student Union Building (today’s Communication Building) and along the Boise River, the construction of these halls accommodated the rise in Boise’s student population as well as predicted the continual growth of the college in the foreseeable future.1  As World War II’s GI’s flooded into universities from 1946-1950 and with birth rates on the rise, College President Eugene Chaffee foresaw a great growth of student enrollment. While at the time he was serving in the United States Navy in 1946, Chaffee wrote to the College Board of a need to stabilize Boise Junior College’s future during this unstable time of war. He suggested, “new dormitories could be used for military training of young men”.

The board seemingly approved of this request and on April 11, 1950 a bond election was passed by a vote of 87% in favor of building dormitories for young men as well as young women.2

Designed by the Boise architectural firm of Hummel, Hummel and Jones, the dormitories predicted cost was around $500,000 and their projected completion date was set at September 1951.3 The actual total cost, however, was $448,495, which included all expenses such as construction, furnishing, heating and electrical.2 While at the time, a large investment for the college, Boise State University’s newest Honors College Residences cost around $40 million with a predicted completion date of 2017. It seems President Chaffee was correct when he envisioned Boise State’s growth and expansion.

At the time of completion, Morrison and Driscoll Halls both consisted of 48 single and 15 double rooms within two floors and a basement level. Located within the basement was a janitor’s room, laundry/kitchen, mechanical, storage and electrical rooms as well as game and computer rooms.4

After the release of the popular film “Animal House” in 1978, living on-campus was now seen as “cool”. The popularity of residence halls was on the rise and the student body began realizing the many perks of living in them. Men and women could live amongst each other, visitation hours were standard, meal plans were flexible and quiet hours were enforced. More students wanted “the college experience” which now meant living on campus. Plus, universities in Idaho had housing rates considered a bargain compared the average U.S. university at the time.5

Currently in 2017, Driscoll and Morrison are both co-ed and home to approximately 150 of BSU’s current Honor’s College students. If choosing to live in either, you will reside in a furnished suite of 8 to 12 students, with laundry and kitchen located in building.6 2017 housing costs range from $4200-$5200 for an academic year as compared to $70-$141 monthly in 1972.6/7 As a resident, you will also be assigned a Resident Director and/or live amongst a Resident Assistant.

Throughout campus history, Resident Directors and Assistants have been vital components in maintaining the rules, function and success of the residence communities. In fact, in 1968, being a “RD” was an “experience proven to be one of the best recommendations possible for job opportunities after graduation”. Applicants must have been a sophomore or junior who would live in the dorm with a “high degree of social competence and ability to work well with other students”. The salary consisted of room and board plus $50 a month.8

You will also be pleased to know that Driscoll and Morrison have always been keeping up with the times. Vending machines were added in the late 1960’s and revenued $140 from October to December 10, 1970. In the 1980-1981 fiscal year, new color televisions were added to each of the lounges.9 Today, each residence is equipped with Wifi and HD cables.

Evident in their architecture, Driscoll and Morrison Halls both have Boise State’s signature red brick exterior in a common bond pattern, a triangular gable roof, square stone entry ways and small jalousie windows at the top point of the facade which provide the buildings with ventilation.10 Virtually identical, Driscoll and Morrison Halls are reminiscent of Boise State’s charming past in their Post-Modern styles with classical influences.

Walking by these historical halls you can’t help but feel reminiscent of the times when Boise State was a mere Junior College with vast open spaces, few buildings and a small student body population; little did they know of the magnificent university it would become.