The Albertsons Library is located on the Boise State University campus, north of the Administration Building. The building architects were Hummel –Hummel-Jones and Shawver, a local architecture firm. Construction of the building began in 1962 after district voters approved an $800,000 bond. In 1964, then Boise Junior College, opened the doors to a new, some 44,000 square foot, modernist library building. Since then, the building has undergone two additions between 1970 and 1995 and now also houses the College of Innovation and Design and the Maker Lab.

A view from the second floor of the library entry lobby, ca. 1969. In the foreground is a piece of art hanging from the ceiling, and in the background is the Liberal Arts building. The fountain pool is visible between the buildings. 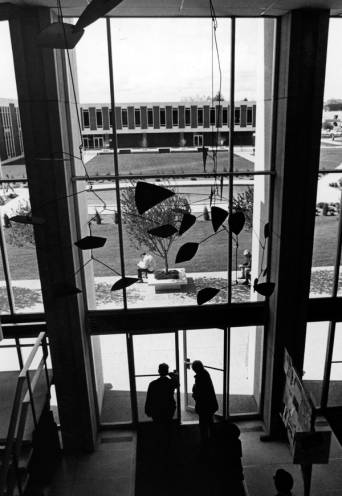 October 1968, dedication of the Memorial Mall, a fountain and courtyard dedicated to those who served in the military. 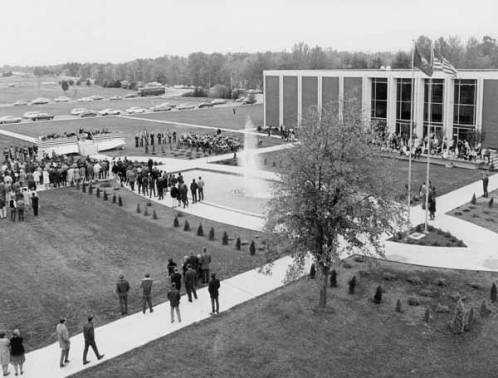 View of the the front of the Library and Fountain, ca. 1969. 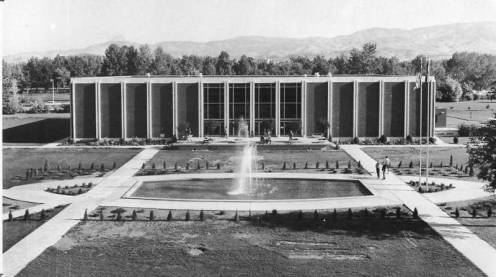 A view of the entry lobby of the Library as depicted on the cover of the student directory for 1968-69. This space, part of the original Library building constructed 1963-64, was expanded to a three floor atrium in 1995. 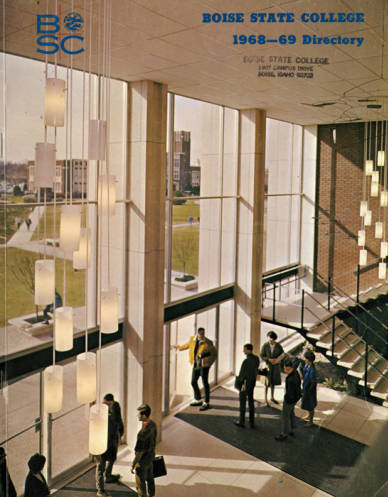 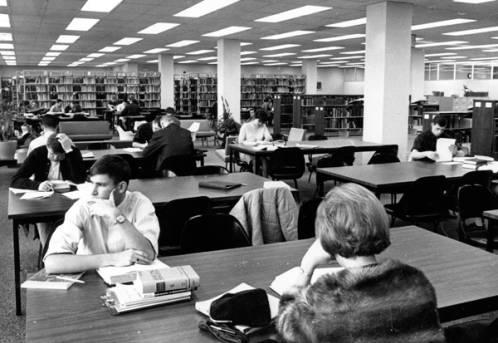 Color photograph of the front of the library as seen from near the Student Union, ca. 1966. Below the tree on the left is a sign the reads "Hello Walk." 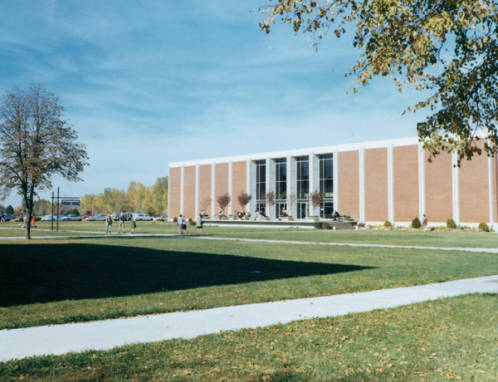 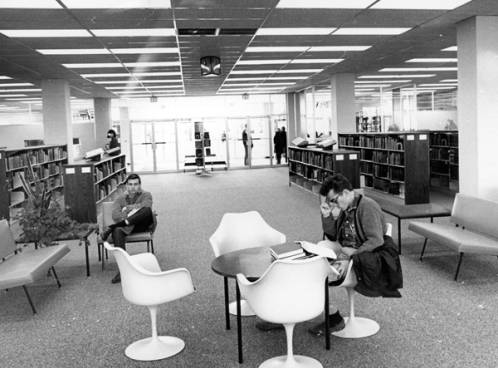 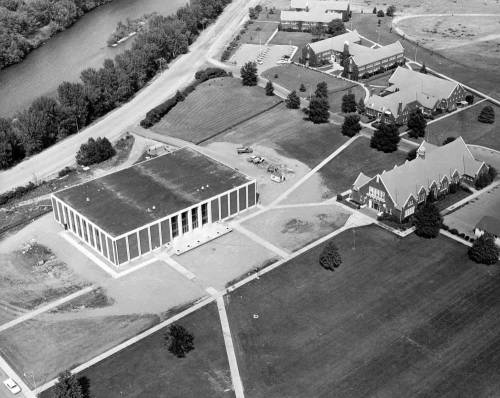 One of two staircases in the main entrance to the library from 1964 to 1993. When the building was remodeled in 1993-95, the entry lobby became the atrium of Albertsons Library. 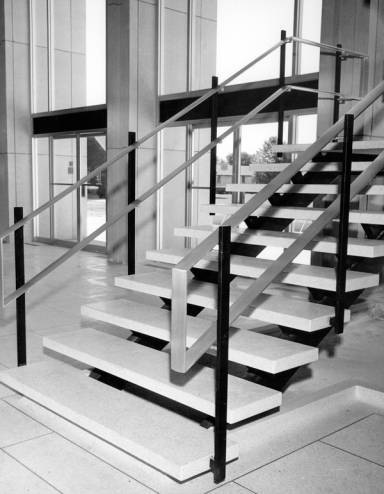 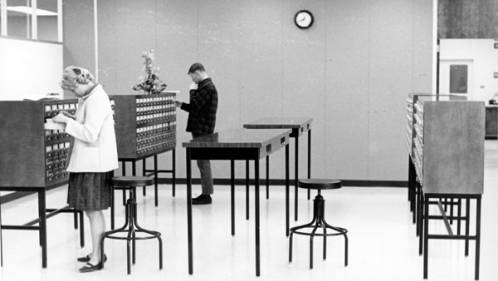 Students studying (and one napping) in the library at Boise College, ca. 1967. 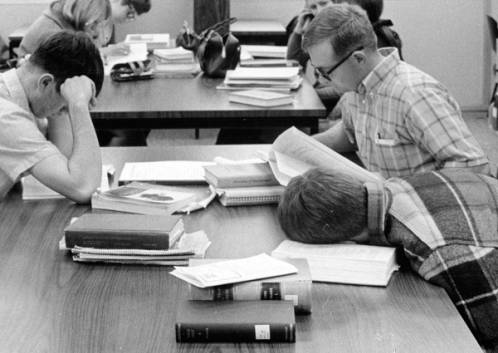 Head Librarian Ruth McBirney with a collection of periodicals in library storage at Boise Junior College, ca. 1961, before the Library Building was built. 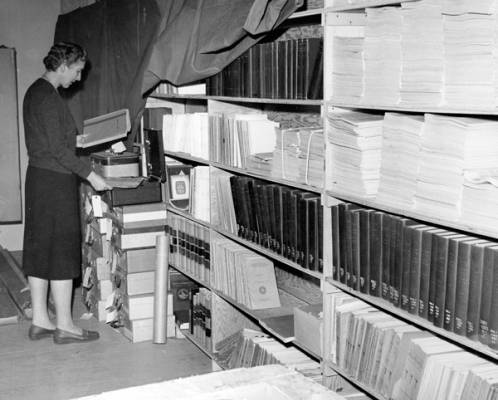 Students studying in the Boise Junior College library when it was still located in the Administration Building, ca. 1961. 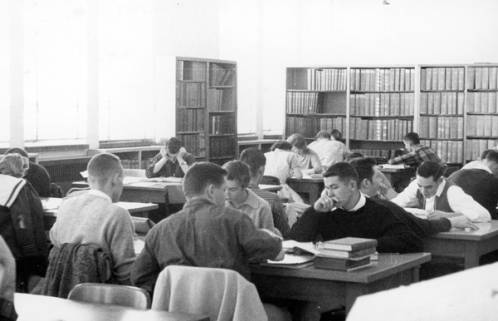 Students checking out books at the circulation desk in the library, when it was still located in the Administration building. The doors in the background are the first floor doors on the east end of the building, ca. 1960. 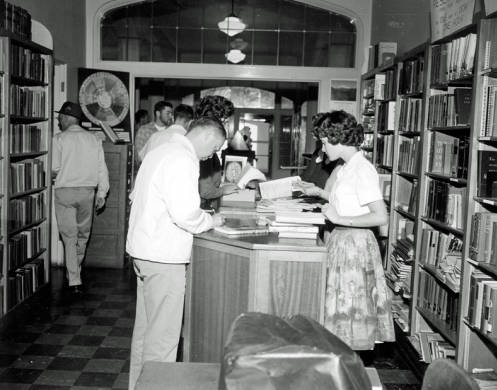 Students using the library to study. Notice the number of chairs per desk. By the early 1960s, the number of students was outgrowing the capacity of many of the buildings on campus. The Library was still located in the Administration building then. 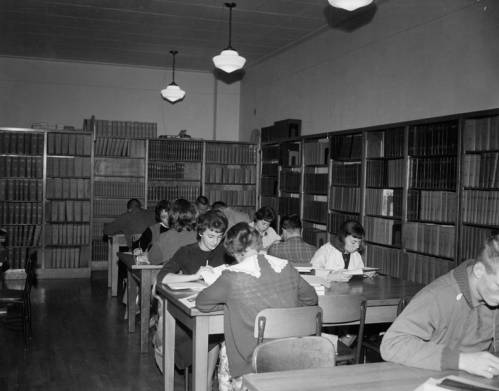 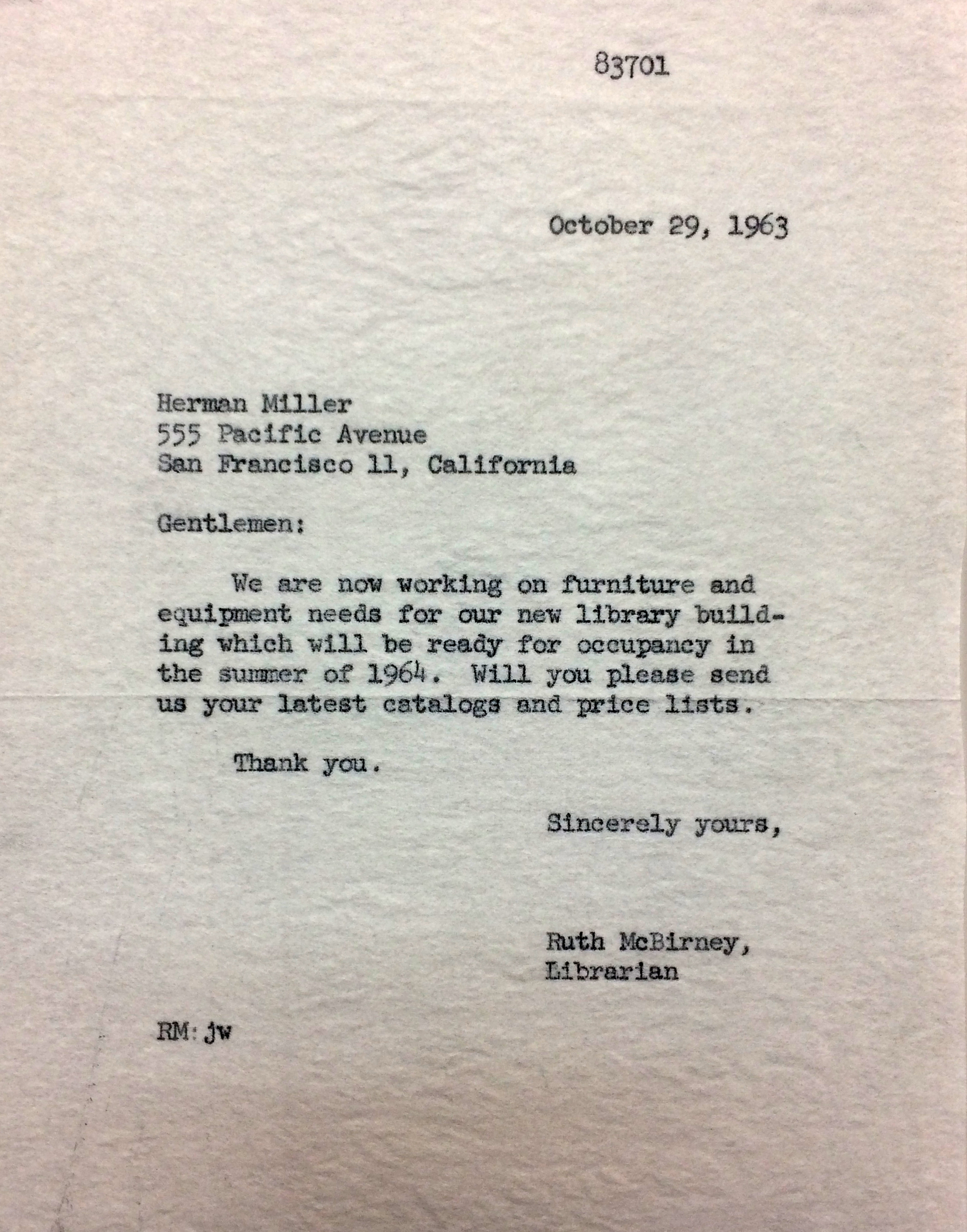 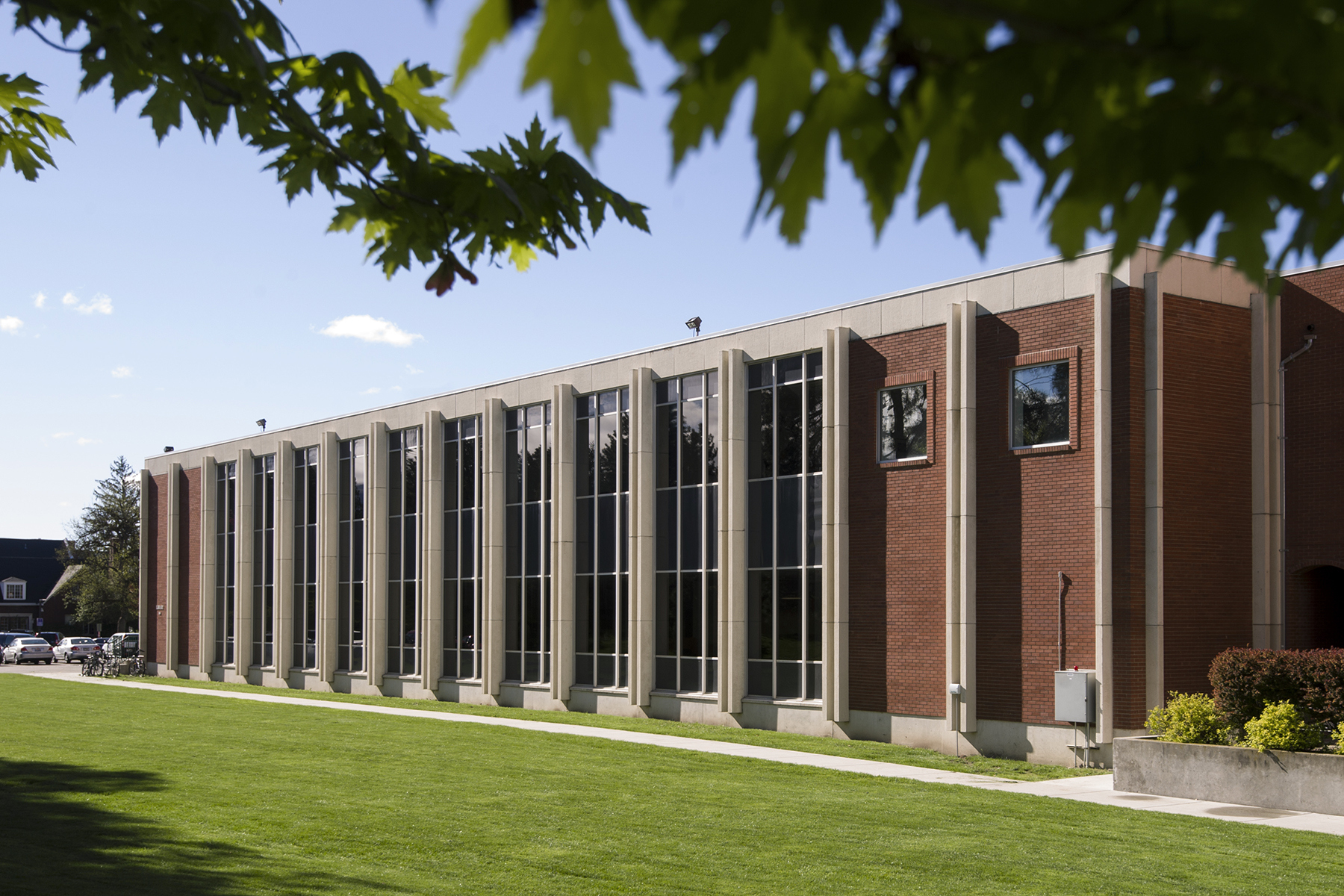 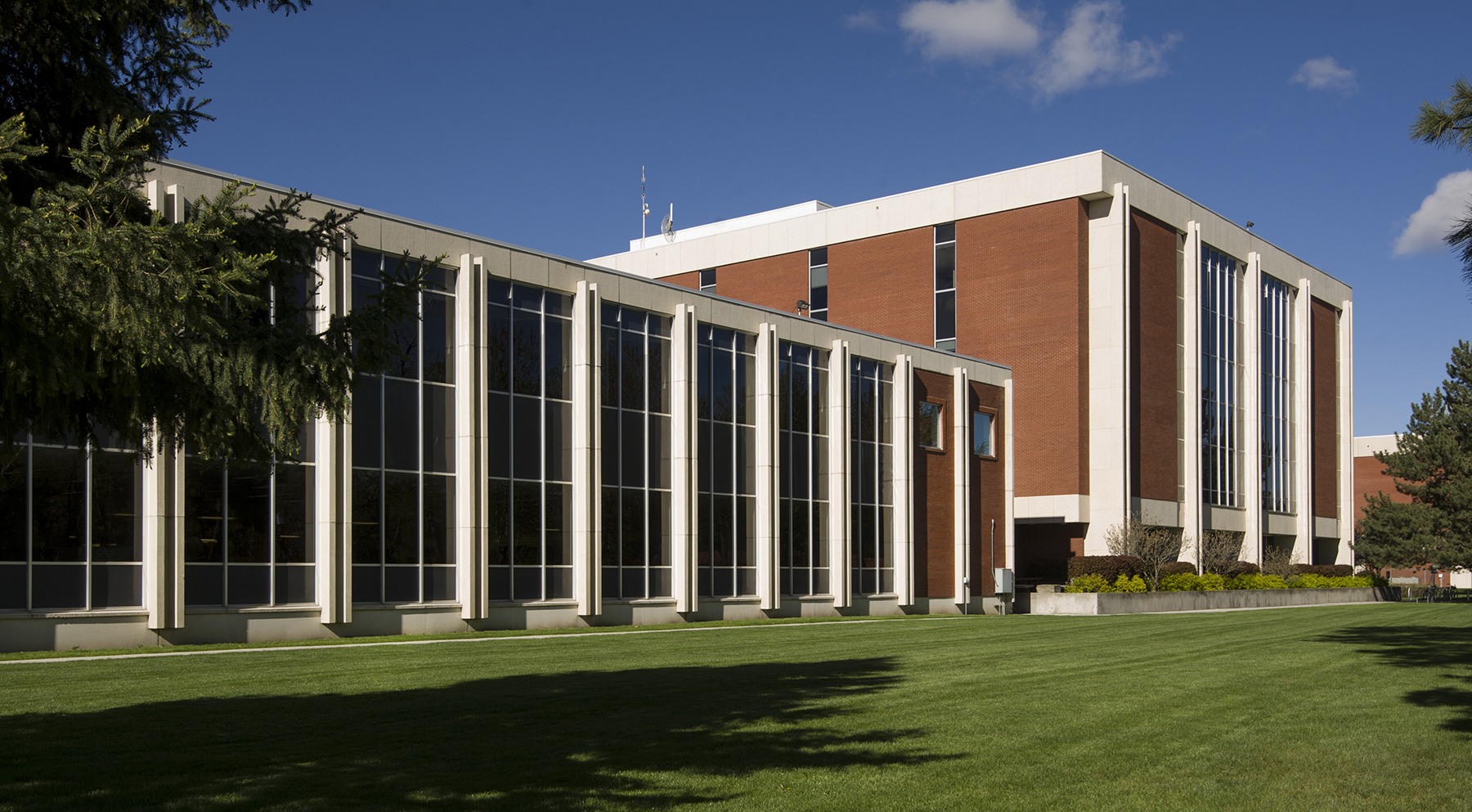 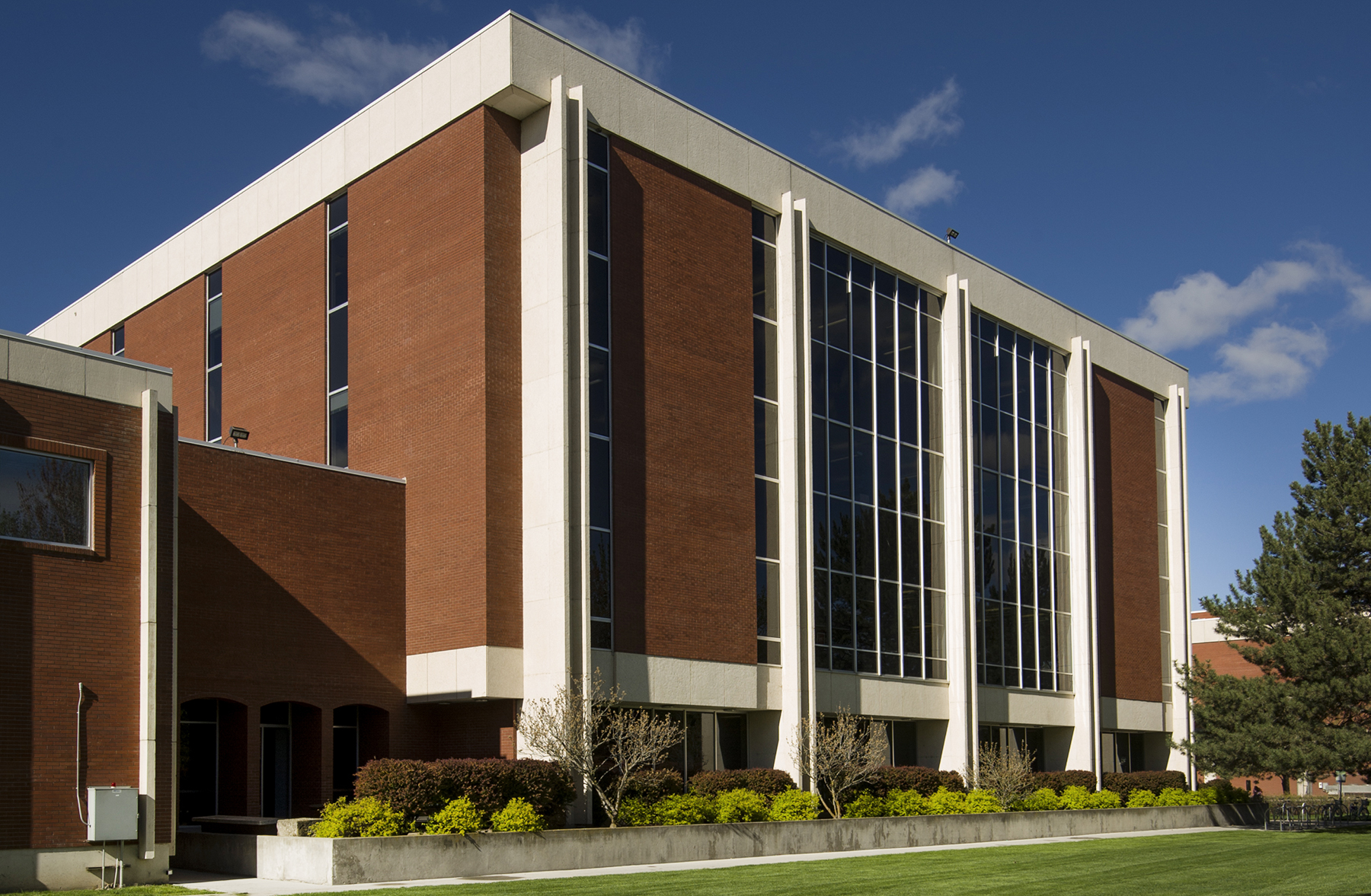 View of the back side of two story addition that connects the original 1964 structure to the 1970s four-story tower addition. 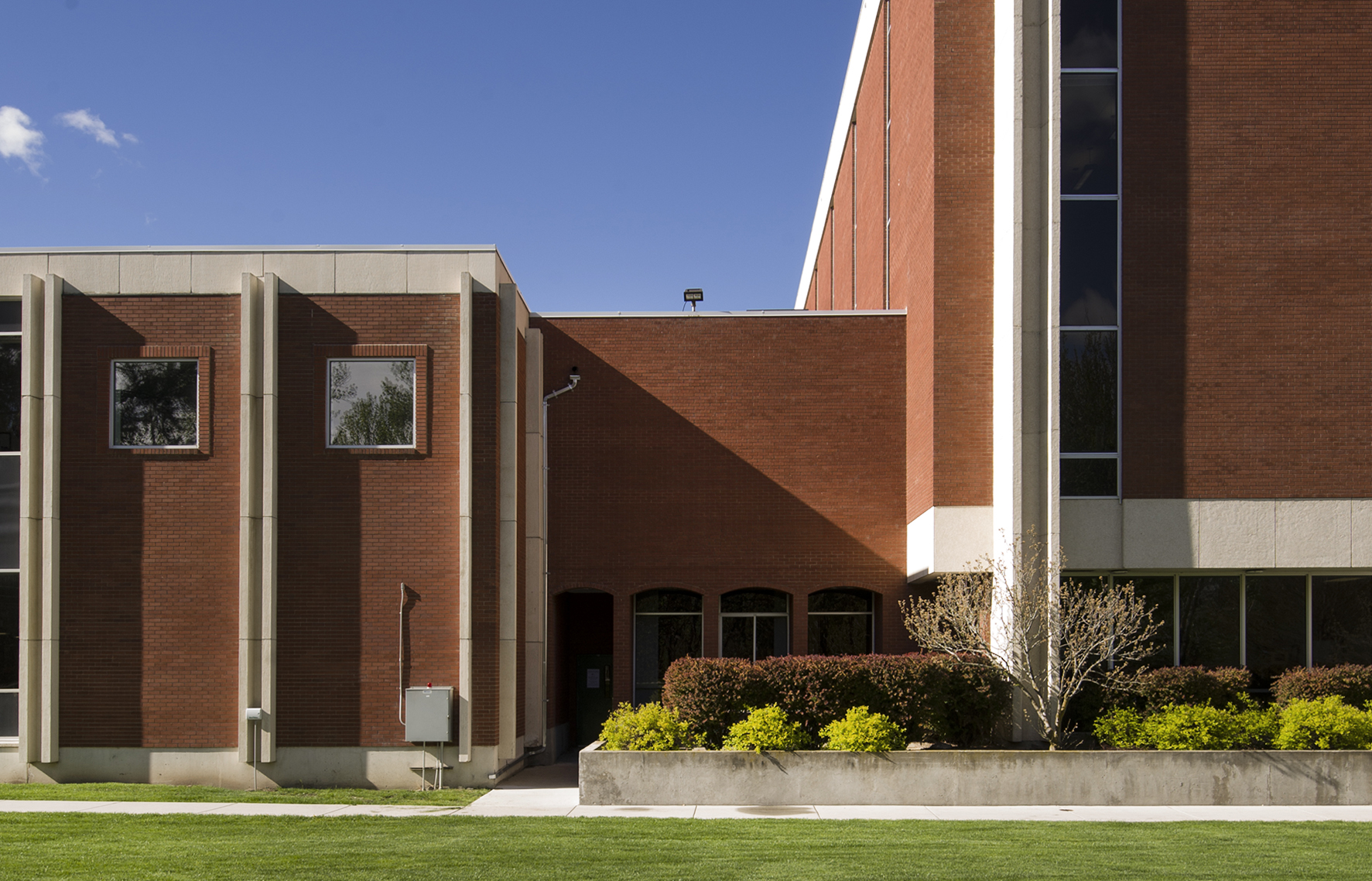 West facing view of the Library showing the difference in brick color of the 1995 addition. 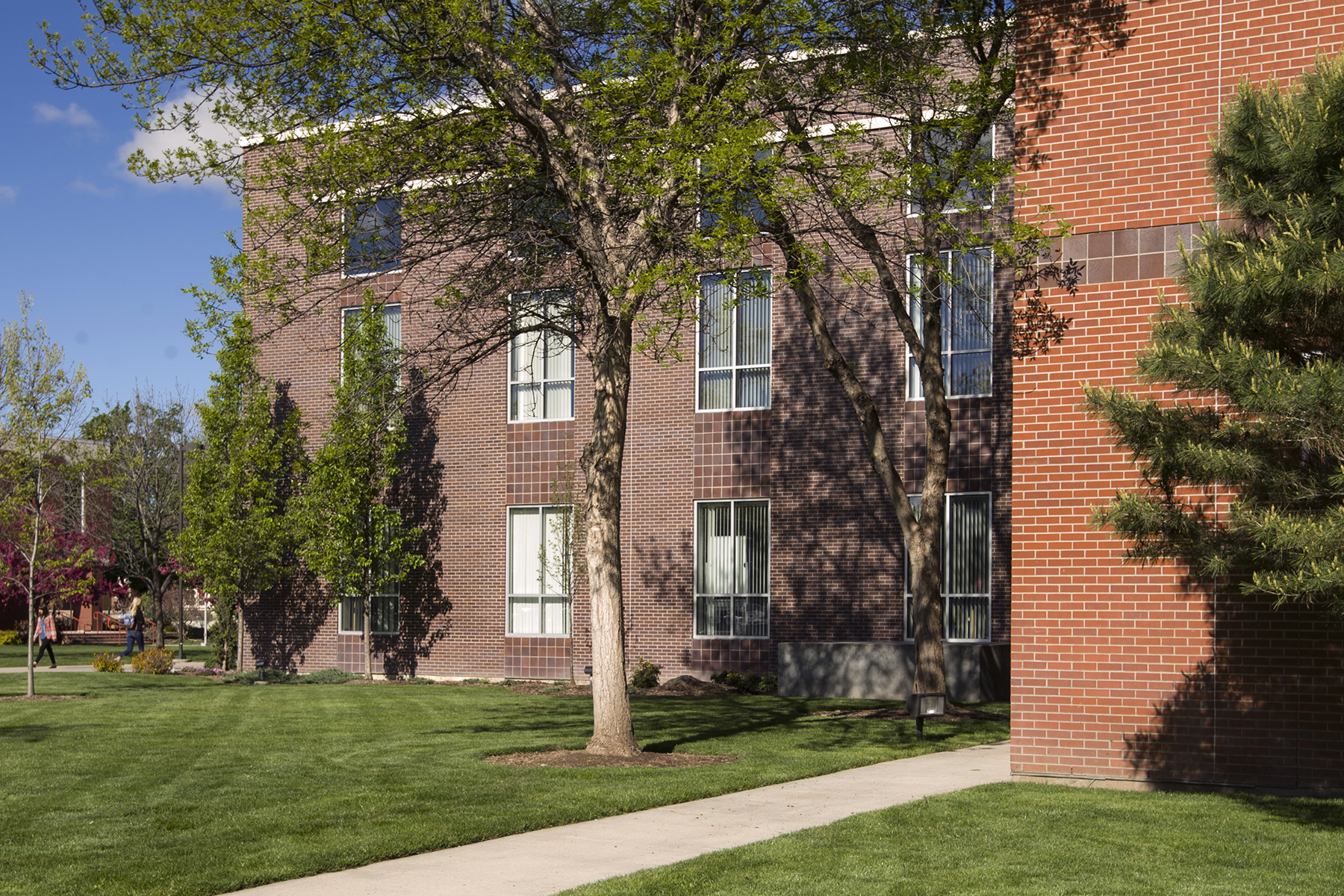 View of the front of the Library showing the 1995 addition as well as the solar charging station which was added in 2016. 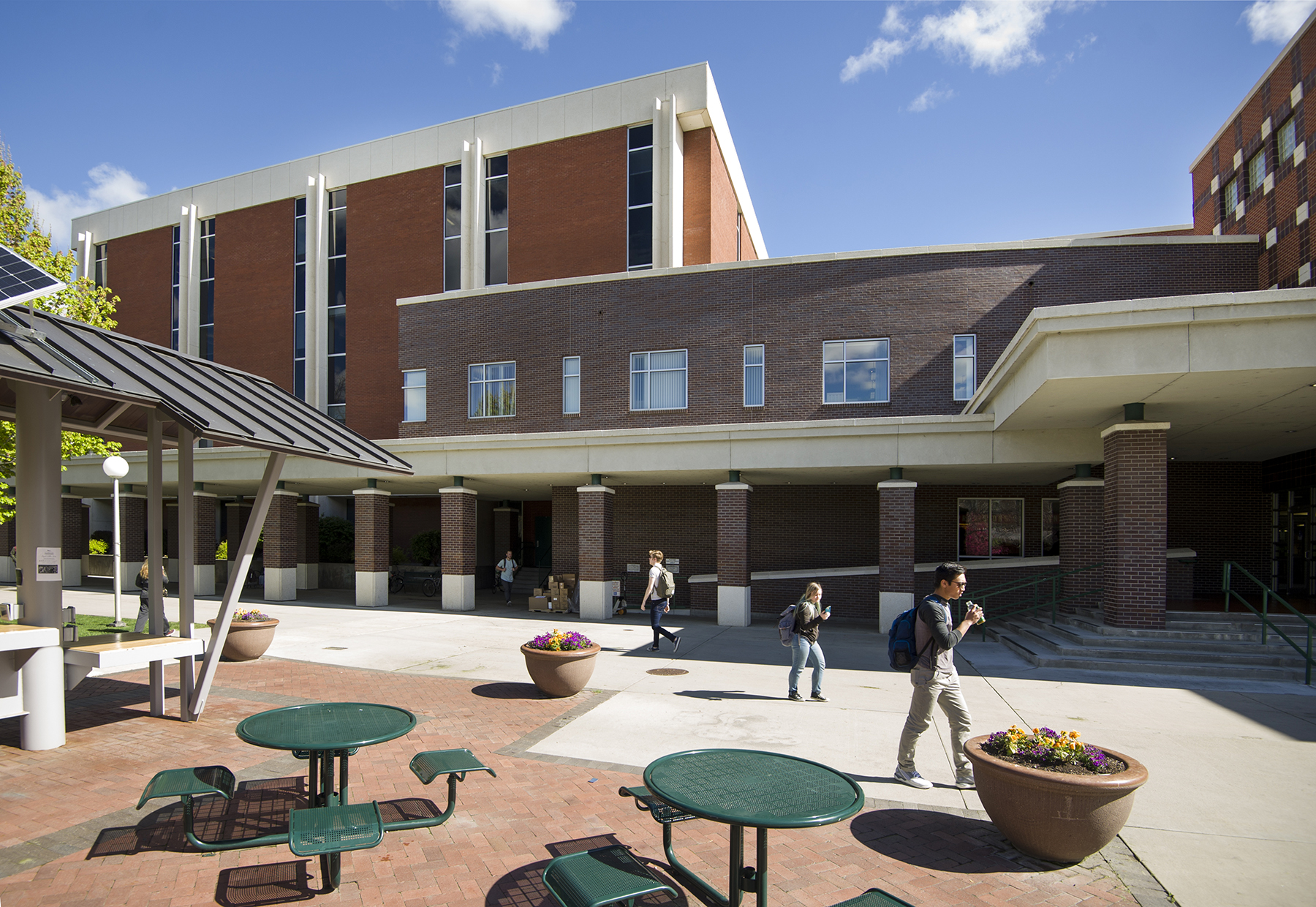 View of the front (south facing) side of the Library. 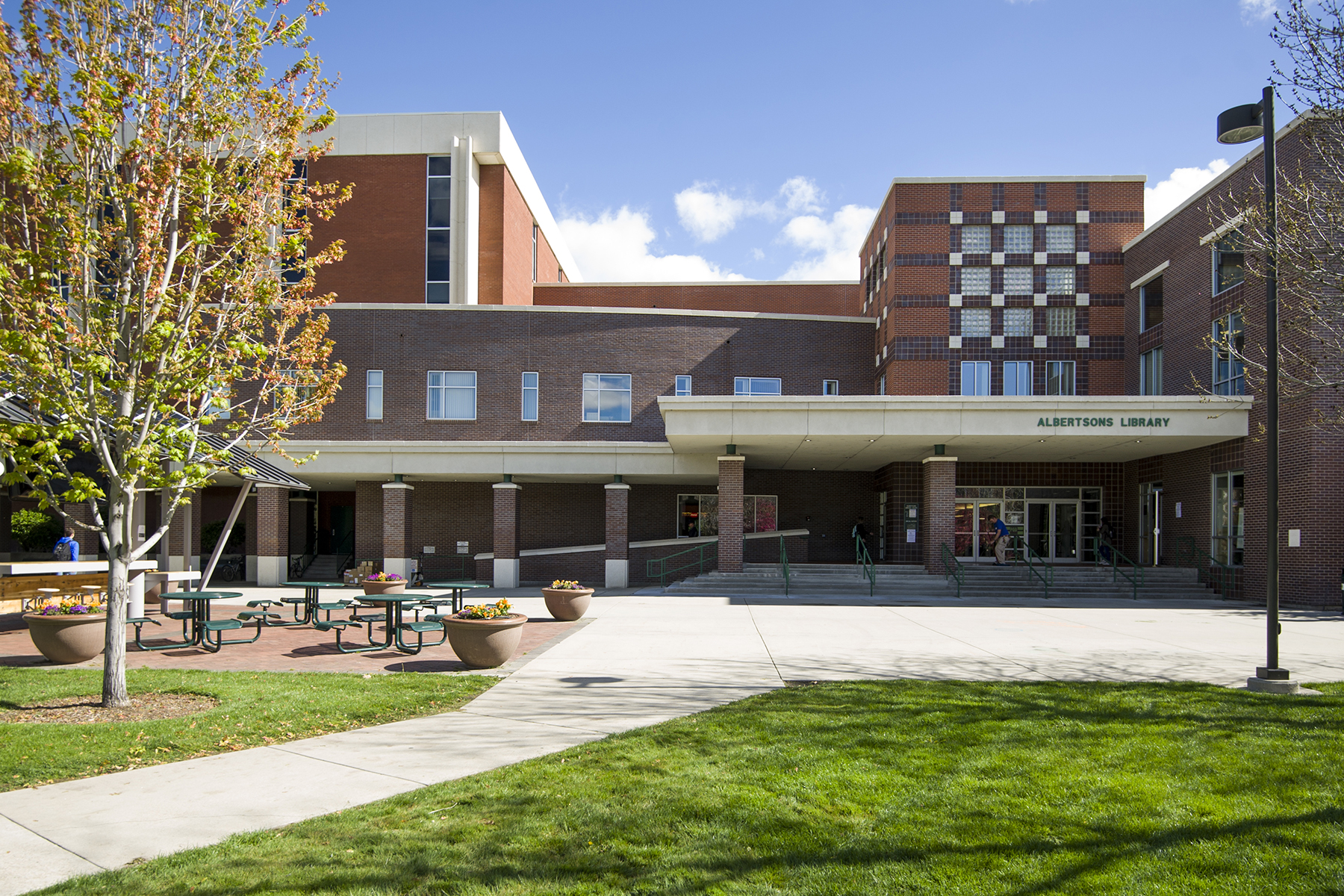 View of the southwest side of the Library showing the brick columned hall leading to the entrance. 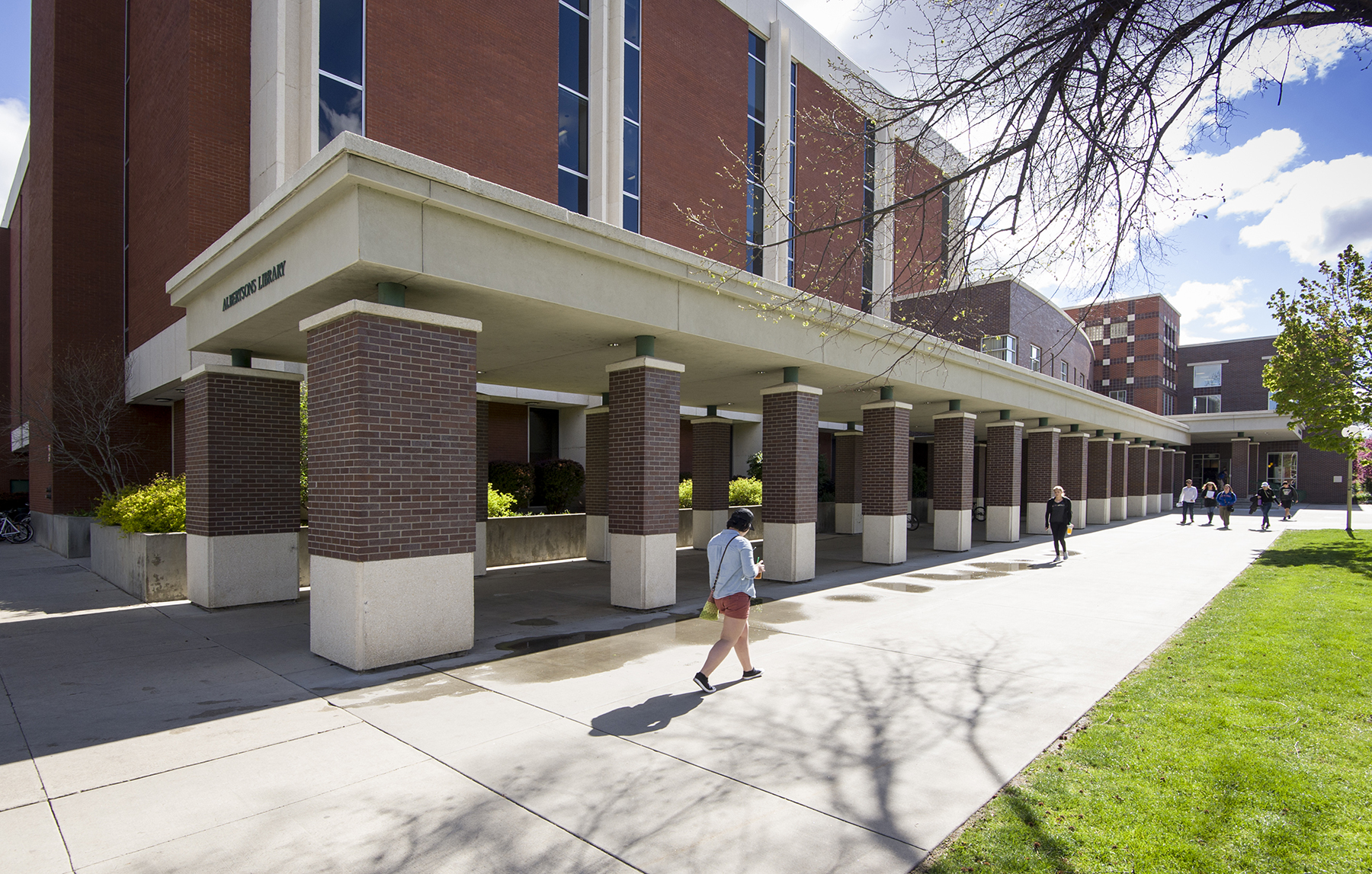 View of the columned hall with the Administration Building visible. 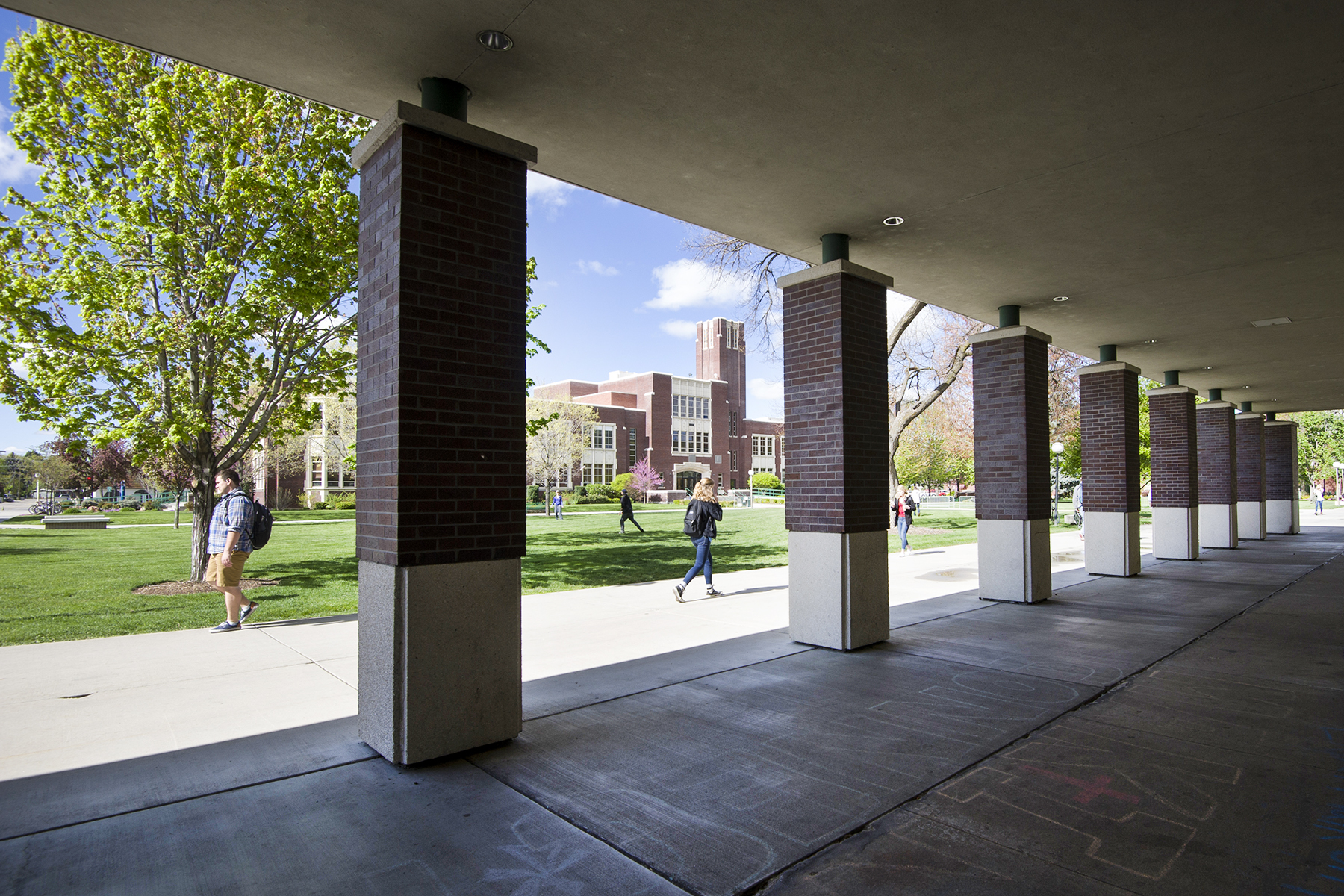 The fake owl located in the southeast corner of the library was added when the 1995 addition was finished. The owl's purpose is to keep the pigeons away. 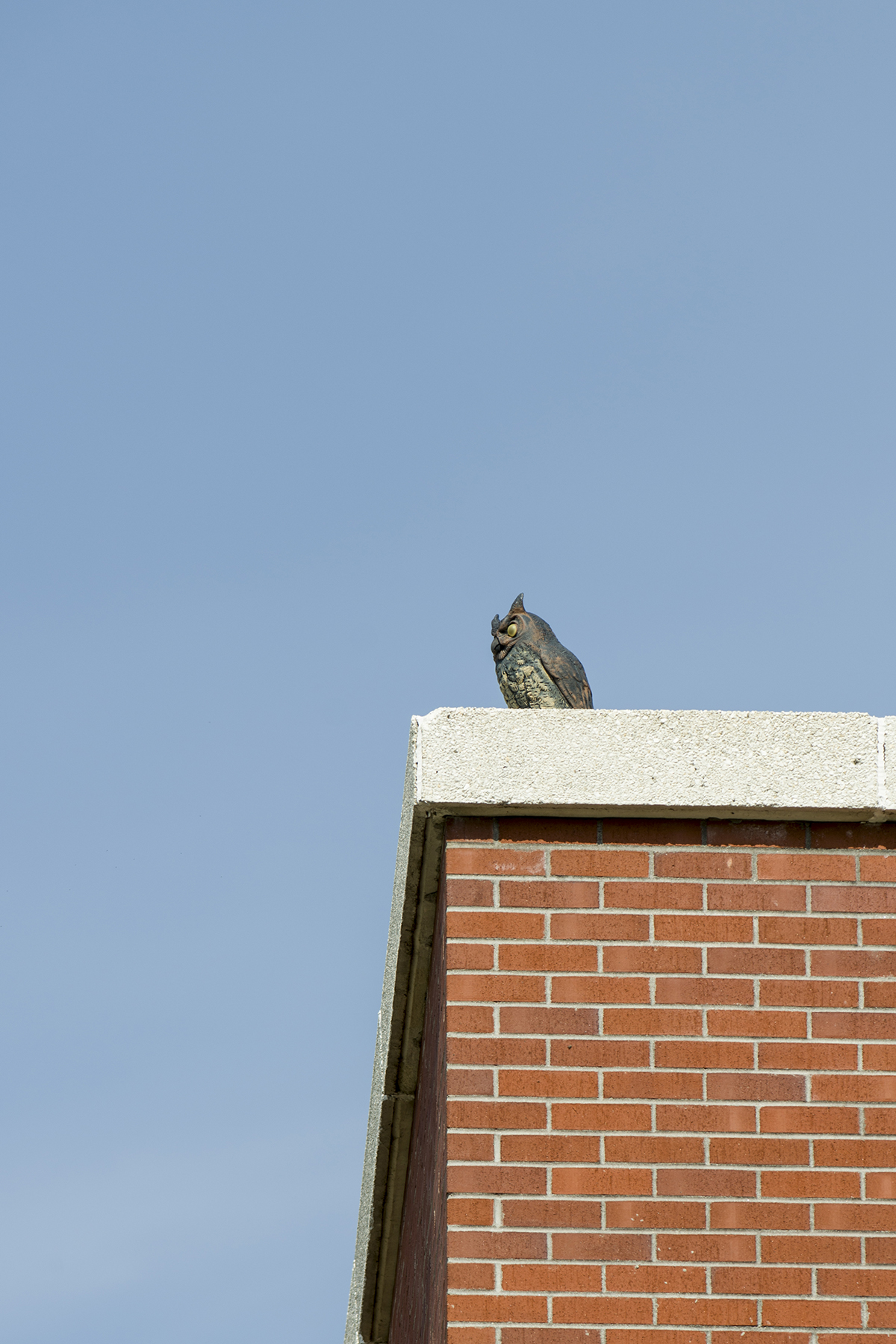 The Library began in 1932, most likely a shelf or two in the office of a Dean or Professor with a modest 4,000 volumes.  It wasn’t long before the growth of the student body, mostly due to the GI Bill after World War II, demanded a library that met their needs.  By the early 1960’s the library was occupying an entire end of the Administration Building and bursting at the seams. In July 1960, Boise Junior College had 24,424 volumes. By the time the library moved to its new building there were over 20,000 volumes.

In 1961 the architects Hummel-Hummel-Jones and Shawver were tasked with creating a modern aesthetically pleasing building, yet inviting to students and faculty. They chose to use dark red brick with white cast stone trim and vertical fenestration which was the characteristic design motif of the campus at the time. The main entrance featured two Precast Terrazo staircases with a Terrazo base and floor that lead to the second floor. Amenities included an informal reading and smoking room and a typing room.

In 1964 still a two-year junior college, a new modern library building was opened. It was the intent when the building was built that the entire first floor would be dedicated to books with the second floor being dedicated to the Instructional Materials Center, office and classroom spaces. The library was planned as a Junior College building and as such would have served it well for many years, but in 1965 when the two-year college became a developing four-year degree granting institution, it was no longer large enough.

In 1967, the Esquire Club, a college organization that's composed of veterans, raised funds to build a mall and fountain between the Library and the Liberal Arts Building. The mall would be dedicated to the memory of Idaho men and women who had died in the armed forces. The cost of the mall was $17,500 and it featured a fountain, planters, benches, sidewalk and flagpole. On October 22, 1968 the mall and fountain were dedicated and many state dignitaries delivered speeches, including Sen. Frank Church.

Also in 1968, President Barnes prioritized a $2,616,000 four-story addition to the Library on the west side of the existing structure. The $2,616,000 included the cost of books, desks, stacks, electronic and other equipment. Construction of the second phase lasted from 1970-1972. When the addition was completed the Library was renamed The Library Learning Center.

In 1993, another expansion to the Library was planned. This addition was planned for the south facing side of the two story original building. The addition would include the removal of the mall, fountain and the two staircases in the main entry and addition of the columnned hall and a three-floor atrium. Also in 1993, former Albertsons executive, Warren McCain, offered a matching gift to the library which created a 2 million dollar endowment for the collection of books on western life. Upon the completion of the addition and the new McCain Reading Room in 1995, the Library was rededicated and renamed the Albertsons Library.

In 2015, the Maker Lab opened on the first floor, a student center that features 3D printers, vinyl cutter, a green screen and more. Also in 2015, the College of Innovation and Design opened on the second floor replacing the old Instructional Materials Center space.