Boise State University is home to the NCAA division 1 Boise State Broncos. When the Broncos have home games they play at the Albertsons Stadium (formerly known as the Bronco Stadium) located at BSU. In addition to its rich history, the Albertsons Stadium is unique in many ways. It boasts the only artificial ‘’blue turf’’ in the league, the Noble Gallery that holds BSU’s sports history and accomplishments, and the aesthetically pleasing Stuekle Sky Center.

Photo of Wally Benton after his parachute failed to open while skydiving to deliver the game ball on September 11th 1970. 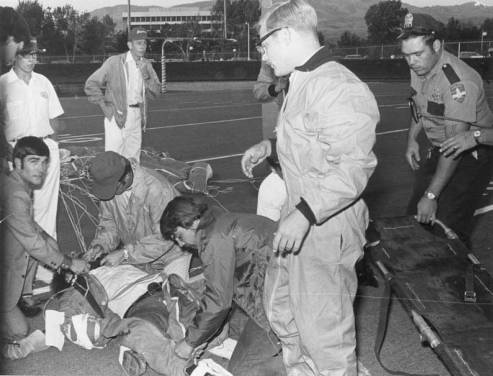 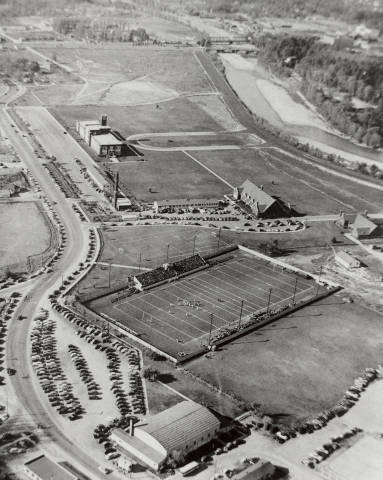 Article from the Arbiter on September 11th 1970. This was when the first game was played at the new stadium. 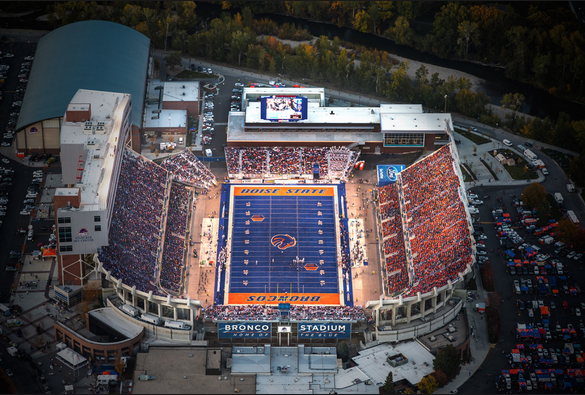 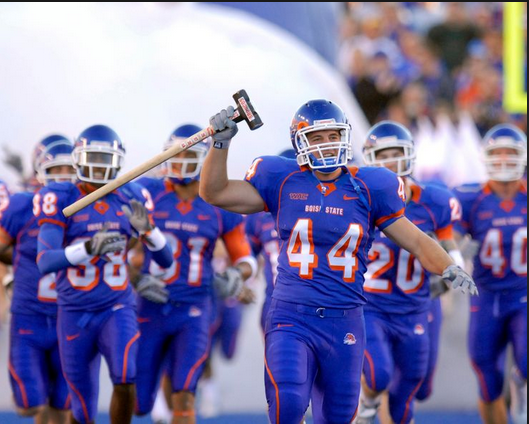 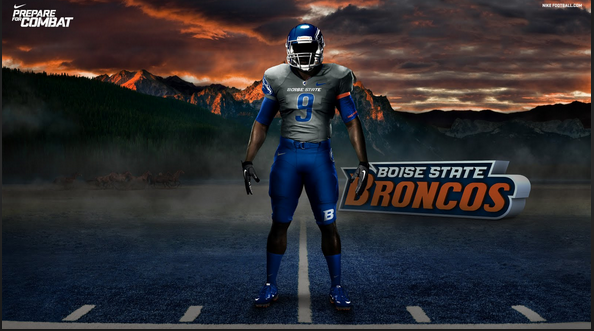 The architects chosen to design the stadium were Nat J. Adams & Associates. Construction of the Albertsons Stadium was completed in 1970 in the contemporary collegiate athletic stadium style. It cost $2.2 million to construct. Architecturally speaking, modern stadiums have been influenced by ancient colosseums. You can thank Roman architects for the standard ''U'' shape of the stadium, the tiered seating style, and even the covered roofs that some stadiums boast.

History
In 1940, Boise Junior college moved to to the old airport site next to the Boise River. The original Bronco field was on the site where the current Student Union Building is. The bleachers were made of wood and had a capacity to seat 1,000 people. However, the junior college would borrow extra bleachers from Boise High when needed. In the 1950s, the first Bronco Stadium was constructed. It had a seating capacity of 10,000. In 1969 construction of the west side tier and field began for the current stadium. Initially the seating capacity was 14,000.

The first addition to the Bronco Stadium was the construction of the east side upper deck in 1975.This boosted the seating capacity to 20,000. The second addition took place in 1997 with the construction of the southwest and southeast corners, the Allen Noble Gallery, and the Larry and Marianne Williams Plaza. The third addition happened in 2008 and consisted of the Stueckle Sky Center. The fourth addition added permanent seating to the north and south end zones. In 2014 the Bronco Stadium changed its name to the Albertsons Stadium do to .Today the seating capacity is 36,387.

In the summer of 1986, the first Blue Turf was installed. It was the first non-green artificial turf in the country. Although the public is restricted from being on the Blue Turf (due to issues with people clipping pieces from the turf) you get an excellent view from the stands and from the Allen Noble Gallery. The Blue turf has been referred to as the ''smurf turf'' by some, although the Broncos are not as friendly as the characters from the cartoon series.

The Allen Noble Gallery boasts much of Boise States sports achievements. In order to be inducted to the BSU hall of fame you will have had to graduated and been out of school for at least five years. Upon walking in to the Allen Noble Gallery you will be greeted by an information assistant who can assist you with information about the rich history of sports at BSU. On display are several trophies, plaques and memorabilia, along with information boards with a wealth of knowledge. So, if you're a first time visitor, this is an excellent place to familiarize yourself with interesting facts about the athletic achievements BSU athletes have accomplished.

BSU’s Stueckle Sky Center is the newest addition to the Albertsons Stadium with amazing views of the famous ‘’Blue Turf’’. It was opened in August of 2008. The Stuekle Sky Center is a four level 131,000sq ft. facility that is comprised of 48 loge boxes, 832 club seats, 39 sky suites, and 5 banquet style/ meeting venues. This is the only part of the stadium where alcohol consumption is permitted.

Conclusion
If you're ever in the beautiful city of Boise Idaho, come enjoy a football game at the Albertsons Stadium. Experience the ''Blue'' in a friendly, but competitive  environment. Many of our fans have tailgate parties in the parking lot as well. So come out and enjoy the game! Go Broncos!