The Micron Business and Economics Building on Boise State's Campus is home to the College of Business and Economics and is often referred to as the face of the University, since its location along Capital Boulevard often makes it the first building seen by visitors arriving on campus. Constructed in 2012, this building features state-of-the-art classrooms and lecture halls accommodating up to 250 students. This building replaced the University Inn, a hotel which was purchased by Boise State in 2006, and torn down in 2010. The construction of the Micron Business and Economics Building was largely made possible thanks to a $12.5 million contribution by Micron, covering almost half of the building's $28.8 million dollar construction cost, and earning them the right to have the building named after them. 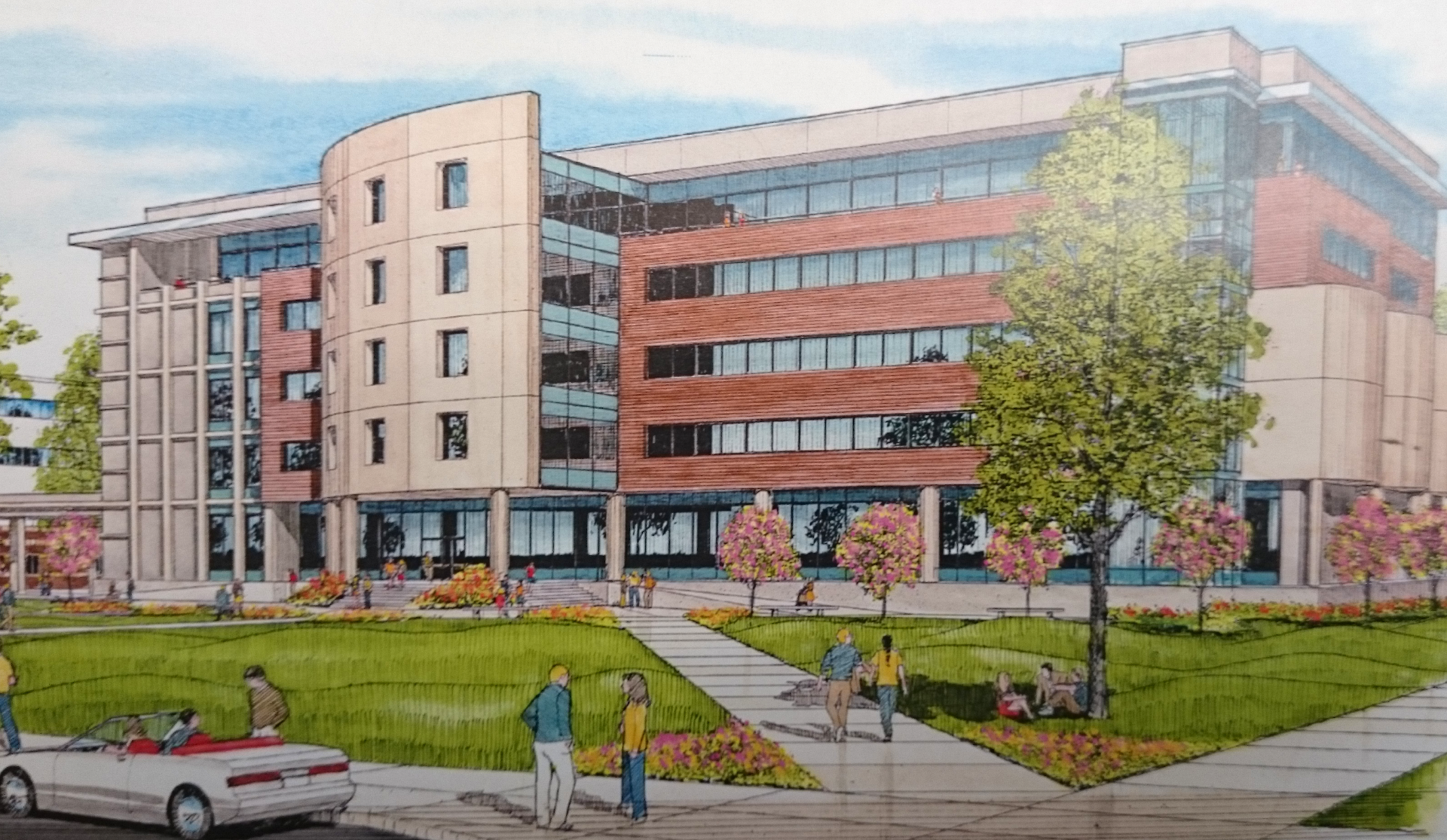 Image of the University Inn and Iron Gate lounge, demolished to build the Micron Business and Economics Building. (From BSU Special Collections)

This building, known as the Micron Business and Economics Building (MBEB), The College of Business and Economics Building (COBE Building), or even simply The Micron building, sits along Capitol Boulevard and is frequently referred to as being the new “Face of Campus” since it will often be the first building people see when arriving on campus.  This four story building is a total of 118,890 square feet and is “designed to emphasize student learning, research, and community collaboration”.  Additionally this building features some of the most state-of-the-art classrooms and lecture halls on campus, which have larger workspaces, convenient access to power outlets, comfier chairs, and newer projection systems.  Inside the building you will find lecture halls accommodating up to 250 students, student common areas and food vendors, specialized rooms for the College of Business and Economics such as a financial trading room, as well as a spacious rear courtyard.1

As one of the newer buildings on campus and since it was intended to be the new figurehead of the University, a large emphasis was placed on the building being as green and energy efficient as possible.  As such, the building’s architectural design was heavy influenced by all of these green factors.  One such green feature is that the building is geothermally heated by 165° water delivered from the City of Boise.  Any excess heat not used to heat the building is then pumped under the building’s main entries and courtyard, to assist in melting snow around the building during Boise’s generally snow-heavy winters.  Additionally, the building takes advantage of advanced water cooling and heat distribution systems, moving from traditional energy-heavy fans to more efficient active chilled beams.  To even further assist in reducing the energy usage of heating and cooling, while also reducing energy usage from lighting, the building features occupancy sensors in all of the lecture halls and classrooms, so that only the parts of the building actively in use are heated/cooled/lit.

Many other forms of energy saving technology and strategies are incorporated into the building design as well, including how the building’s wings feature 5120 sq. ft. rooftop garden systems (while the center building features a traditional pitched roof), which contain natural ground vegetation in soil, which helps reduce storm-water drainage and reduce heating and cooling costs.  The building’s window placement was also purposefully planned out to allow for maximum lighting via day-light.  The windows themselves are composed of many smaller panes of glass connected with muntins, and the panes are coated with a very thin metallic coating (low-E glazing) which greatly increases the building’s heat retention in summer while reducing the heat loss in winter.  The building’s courtyard was even purposefully put in between the building’s two wings to help block out wind and make it a pleasant space even in the cooler months.2

Stepping back and taking a look at the history of this building, the University took the first step towards the construction of this building in June of 2006.  The MBEB sits on a plot of land that was previously home to a hotel called the University Inn (originally named the Thunderbird Lodge when opened in 1957, but was later renamed to the University Inn in 1982).  This 84 room hotel also featured a lounge on the second floor known as The Iron Gate which was a popular gathering place for faculty and students alike.  Boise State University purchased this property for $3.2 million dollars during June of 2006, and shut down the hotel in October of that year.  The building was then used as temporary faculty office space and student overflow housing until it was demolished in 2010 to be replaced by the MBEB.6   The hotel’s (and its lounge’s) closing meant shutting down the closest bar to campus, causing much dismay by students as well as faculty.5

The MBEB’s construction, costing $28.8 million dollars, was largely funded by Micron (hence the building being named after them) who made a $12.5 million dollar contribution.  Its construction started shortly after the demolition of the University Inn, and was undertaken by the construction company Engineered Structures Inc.  The building was then finished and opened in 2012. The building was designed by the Boise based architectural firm Hummel Architects, who turned what was originally a fairly bland and rectangular 5-story building plan into the 4-story behemoth that is the MBEB.3  Comparing the end-result with the original proposed plans for the MBEB it was originally meant to be a much more modest 5-story rectangular building, with a more clean and modern style.  The plan was expanded to create a much larger building than was initially planned, and as such the MBEB included more facilities and rooms than were initially intended, such as the 250 student lecture hall rather than the 200 student lecture hall that was on the original proposal.4

The building’s final plan and the MBEB we see today is a contemporary with a combination of multiple architectural styles, including Romanesque as evidenced by the buildings use of large columnns and columnn shapes set into the walls.  This is most noticeable at the building’s front (facing Capitol Boulevard) with its large, spaced out rectangular columnns spanning the building’s entryway, as well as the large stone steps which lead up to the building’s main doors which are raised up on what is essentially a raised dais.  The building’s style was also influenced by the style of many older buildings on campus, which can be seen in its use of a facing brick surrounding the exterior, used to help make the exterior more closely match with the older brick buildings.  Although, many people view this building’s attempt at fitting in with the older campus buildings as a failure due to the color of the bricks not matching the older buildings and it’s almost bureaucratic style clashing with the more traditionally academic architecture of the older buildings.

Results of the Building

After this building’s construction, it allowed for large expansion from Boise State’s College of Business and Economics, due to the building offering more faculty offices and student lecture halls, as well as many specialized state of the art rooms, such as the financial trading room.  As a result of this building’s construction, it also allowed for the College of Business and Economics to roll out a redesigned Masters of Business Administration program with three possible tracks.4  The building now serves as a standard for other future buildings with its state-of-the-art class rooms and lecture halls which are noticeably nicer than any you’d find in Boise State’s older buildings.  If nothing else, the building allowed BSU to reshape its image into that of a modern university, with this brand new modern building greeting anyone who arrives on BSU’s campus.

1 Boise State University - College of Business and Economics. About Our building. n.d. https://cobe.boisestate.edu/about-our-building/.