The original Battle House Hotel was opened by James Battle and his two half-nephews, John and Samuel in 1852. It was one of the earliest steel structures in Alabama. The original building burned down in 1905 and a new hotel would undergo construction in 1908. It is currently called the Battle House Renaissance Mobile Hotel and Spa.

Built in 1908, the Battle House was closed in 1974 but has been restored and is operated as part of the Marriott chain 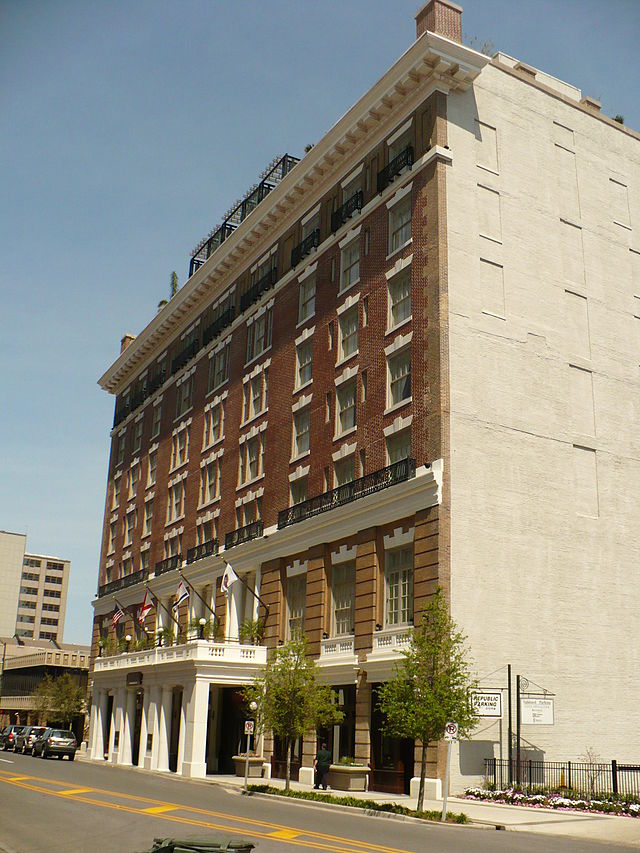 Constructed in 1852, the first edition of the hotel was originally opened by James Battle and his two half-nephews. It was built on the location of a military headquarters set up by former President Andrew Jackson that he used back during the War of 1812. It had four stories to it with a two-story gallery of cast iron and it was a brick building originally. The site where the Battle Hotel was built actually was home to two other hotels, the Franklin Hotel and the Waverly Hotel, that burned down before construction.

A notable guest for the hotel was Stephen A. Douglas, a former United States Senator from Illinois and Democratic Nominee for President back in 1860. He would stay at the Battle House Hotel on the very night he would ultimately lose the presidency to Republican Nominee Abraham Lincoln. Other notable guests that would stay at the hotel would be former Secretary of State Henry Clay, former President of the Confederate States Jefferson Davis, former President Millard Fillmore, and U.S. general Winfield Scott. A National Weather Service station would be placed at the hotel and electrical lighting was added to the place in 1884.

The hotel would be in service for over 50 years and even got renovated in the year of 1900. However, the original hotel would be burned to the ground on February 12, 1905. Afterwards, Frank M. Andrews was hired to create and construct a new building which would be built in 1908. In 1913, President Woodrow Wilson would be staying at the hotel where he said his famous quote:

“The United States will never again seek one additional foot of territory by conquest.” ~Woodrow Wilson

The hotel would get bought by different employers until it closed down in 1974 for the next 30 years. It would be added to the National Registrar of Historic Places in 1975. In 2003, a group called Retirement Systems in Alabama bought the place and renovated it to build it into the standing hotel it is today. They completed this project in 2007.