Built in 1898, the Brown Building was the first four-story building in Monongalia County. It was designed by Elmer F. Jacobs, the most prolific local architect. The building acquired its name from the Brown family, who owned the structure from 1900 until 1907. The building has been home to a variety of businesses including Kellar and Company Dry Goods Store, Morgantown’s Farmers and Merchants Bank, Reams Pharmacy, and several clothiers. The exterior has experienced a few modifications but largely retains its original historic character. At the turn of the nineteenth century, the Brown Building stood at the forefront of Morgantown’s population expansion, and cultural and economic evolution.

A circa 1900-1920 photo of the corner of High and Walnut streets. Note that though the Brown Building is completed, the adjacent lot contains only a modest house. 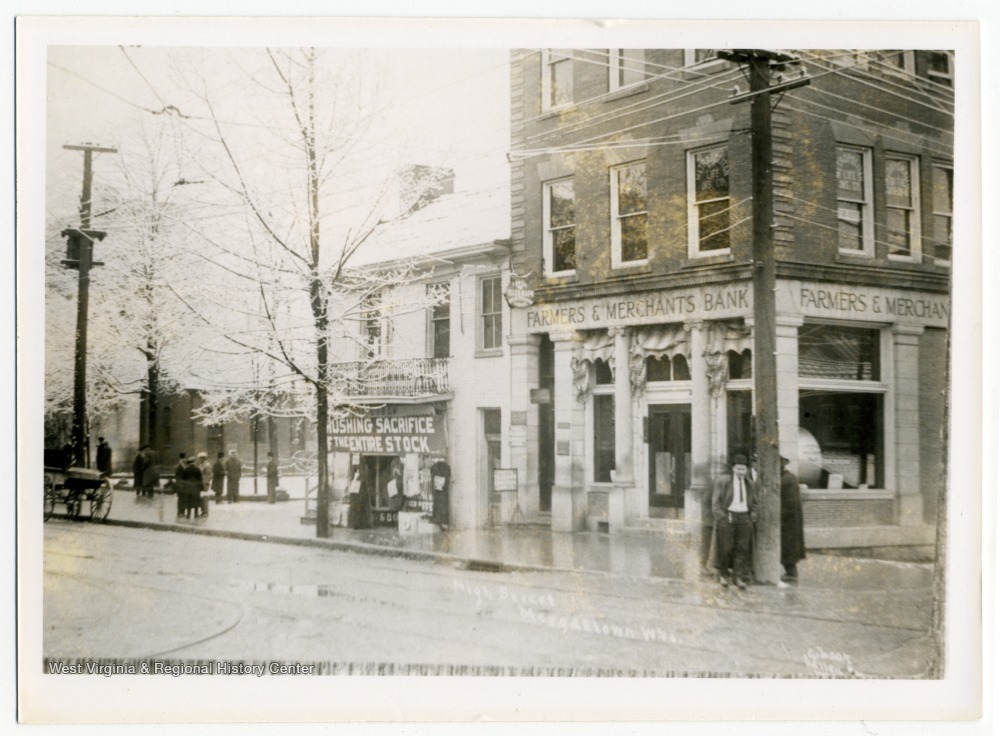 This circa 1920 photo would have been taken shortly after the completion of the Bank of Morgantown building on the left. 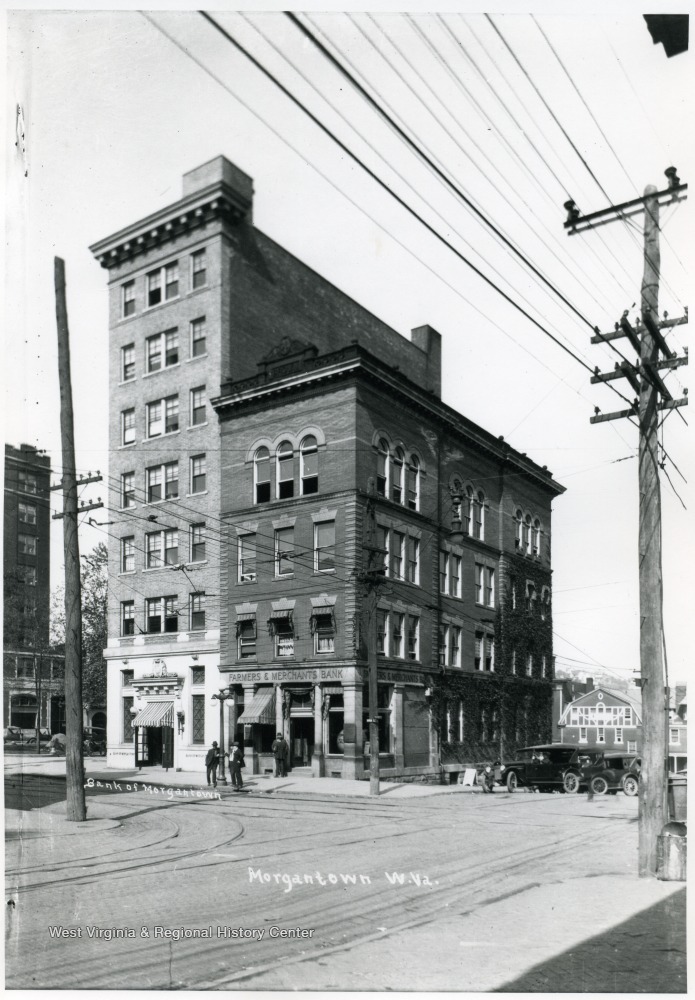 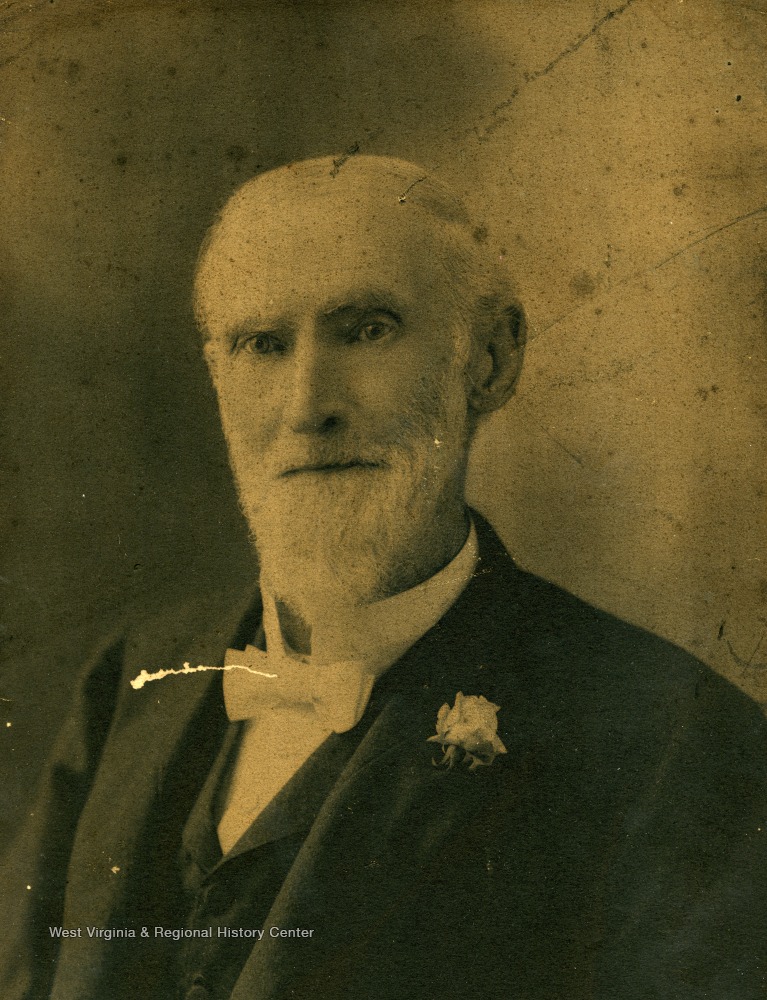 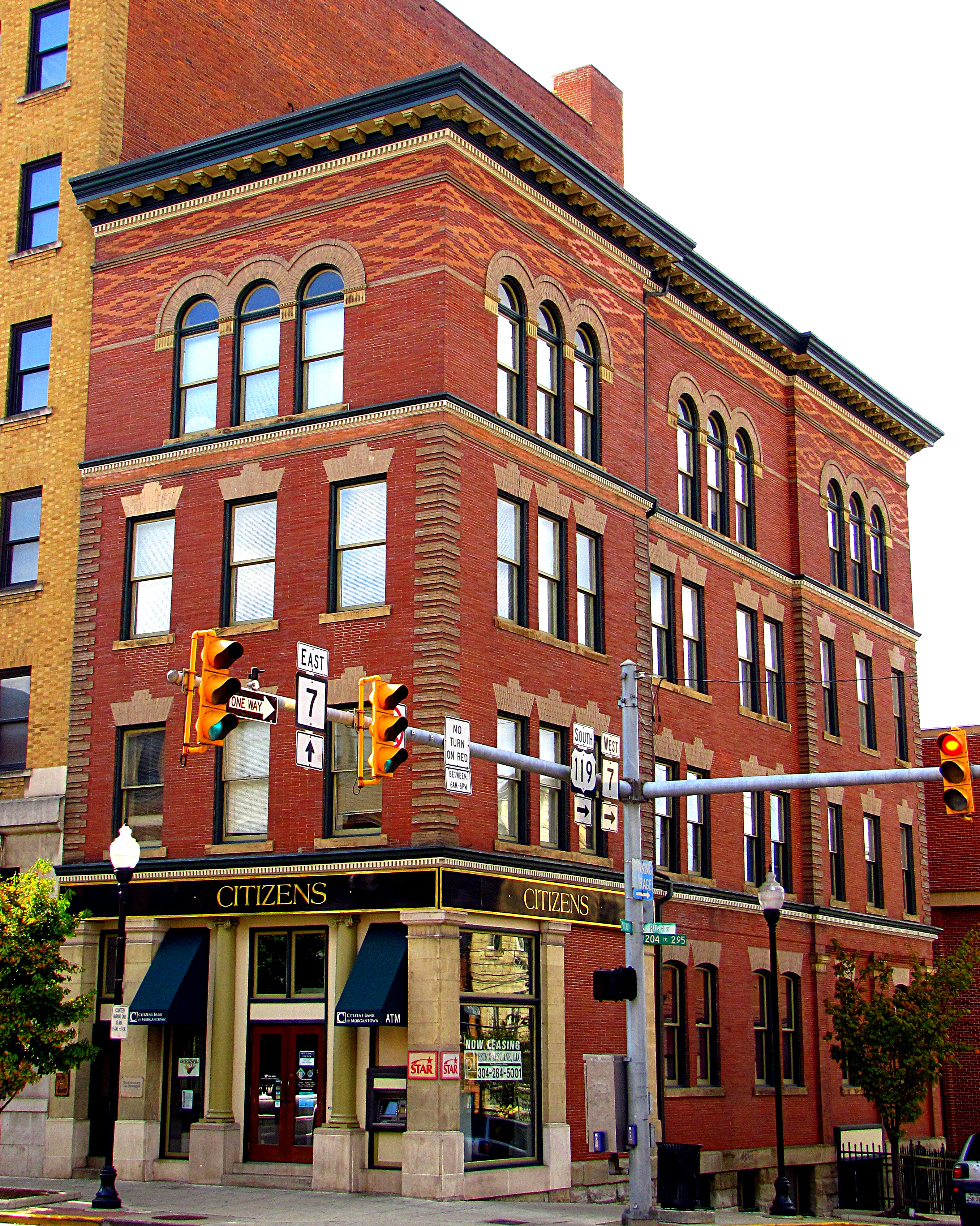 The Brown Building was constructed in 1898 and was the first four-story building in Monongalia County. The structure is primarily red brick, with decorative diamond patterns of yellow brick providing contrast near the top of the building. In addition to color contrast, the face of the building towards Walnut street features three distinct units with the center unit slightly recessed to provide textural variety. Relatively tight bays of windows provide ample natural light to all four floors of the Brown Building. Two courses separate the first and second floors, and the third and fourth floors. The flat roof is hidden by a projected cornice decorated with brackets and dentils. Though a parapet with the word “Brown” on it initially graced the High Street façade of the building, it was removed in 1907. Curiously, the south face of the building (the face opposite Walnut) has little ornamentation. It appears this was a prescient choice, as when it was completed, the adjacent Bank of Morgantown building obscured the south face of the Brown Building.

The Brown Building was built according to plans by Elmer F. Jacobs. Jacobs was a celebrated Morgantown architect responsible for many of the commercial, residential, and civic buildings in the immediate area. Jacobs drew from many architectural styles and periods, something evident from the eclectic elements that grace the Brown Building. S. A. Posten, a real estate developer and mayor of Morgantown, was familiar with Jacobs’ work and hired the architect to design the Brown Building. Upon completion of the structure, Posten immediately sold it to William Whittington. Whittington maintained possession of the building until 1900, when he went bankrupt.

Following Whittington’s bankruptcy, John J. Brown bought Whittington’s property as a gift to his sons, Zalman and Guy. The Brown family was one of the most successful and respected families in northern West Virginia. John J. Brown was born in Kingwood, Preston County and was admitted to the bar in 1848. He was loyal to the Union during the Civil War and was a signer to the West Virginia State Constitution. John J. Brown also served as the first state senator for Preston, Monongalia, and Taylor counties. Brown’s second wife was the primary developer of the South Park neighborhood in Morgantown. Guy Brown was the first Morgantown resident to own an automobile and played a key role in organizing Morgantown’s Chamber of Commerce. Though only owned by the Brown family for seven years, the Brown name became permanently associated with the building.

The Brown Building is significant for its position on the forefront of Morgantown’s rapid growth at the turn of the nineteenth century. With the completion of rail lines and a dam, access to Morgantown significantly expanded. This access encouraged a shift from an agrarian culture to one more commercially focused. The Brown building is connected to important Morgantown residents and businesses. “By its location on High Street and on the ‘Public Square’ just thirty feet northeast of the Monongalia County Courthouse, [the Brown Building] also geographically symbolizes the close alliance between commerce, banking, and government during [Morgantown’s] boom period.”1