This historical marker shares an overview of the history of Martinsburg during the Civil War. Owing to its strategic location, Union and Confederate forces vied for control of the city. In addition to its location on the Valley Pike, Martinsburg was the second-largest city in the Shenandoah Valley and a critical rail junction and along the Baltimore and Ohio Railroad. Shortly after delegates from Martinsburg voted against secession in the 1861 convention in Richmond, Confederate troops occupied the city. Union and Confederate forces occupied the city one after the other for most of the early years of the war. As a result, the war saw the destruction of railroads and buildings, leaving much of the city in ruins until the Union gained control of the city and region in the late summer of 1864.

This historical marker is part of the Civil War Trails series of markers. 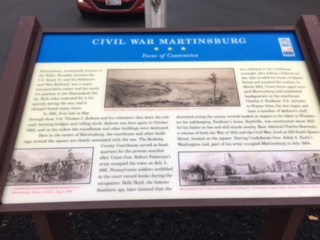 The city of Martinsburg, like many of the residents who lived there, found itself in the midst of the political and military conflict that led the nation to war. Control of the city changed hands between Union and Confederate forces over a dozen times as the two armies waged a battle for control of the Shenandoah Valley. In general, residents of the surrounding countryside supported the Confederacy while many of the residents and merchants in Martinsburg supported the Union.

A week after Martinsburg delegates voted against secession, Confederate troops marched through Martinsburg on their way to Harpers Ferry in order to capture the armory there for the South. Residents of Martinsburg protested against their town's occupation by Confederate forces and this led to Colonel Thomas J. Jackson's decision to send reinforcements in hopes of demonstrating Southern resolve. Although Confederate troops took over the city, Martinsburg residents remained Unionist. This pro-Union sentiment only grew stronger when Jackson sent more troops to Martinsburg and ordered the destruction of area railroads and bridges to sow the Union army's response.

Two months later, Union General Robert Patterson arrived in the area. On July 3, 1861, these Union troops secured control of the city and Patterson used the courthouse as his headquarters. Although majority of Martinsburg hoped to stay neutral or supported the Union, the city was home to Confederate supporters such as the soon-to-be-infamous Belle Boyd. On July 4th, a Union soldier reportedly swore at the mother of Belle Boyd in the midst of an argument. In response, Belle Boyd shot the man and this action began her career as an outlaw and spy for the Confederacy.

The city changed hands from Confederate to Union and back many times in 1861 and 1862. Following the battle of Antietam, much of the city served as a makeshift Union hospital. The Confederacy gained control of the city several times in 1863 and 1864 and it was not until the final year of the war that this pro-Union city in what became the Unionist state of West Virginia remained under the control of local residents and Unionist forces.