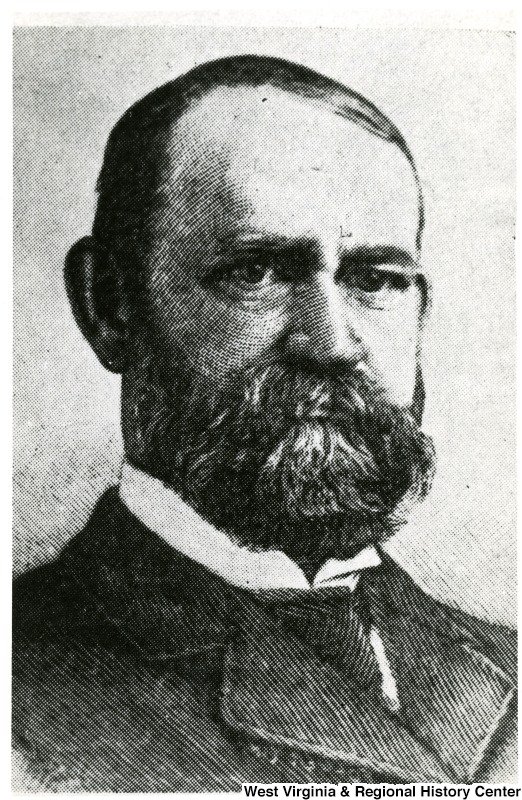 Lewis Ruffner, cousin of Henry D. Ruffner. A staunch Unionist, he served as a delegate to the Wheeling Convention, which resulted in West Virginia's statehood in 1863. West Virginia & Regional History Center. 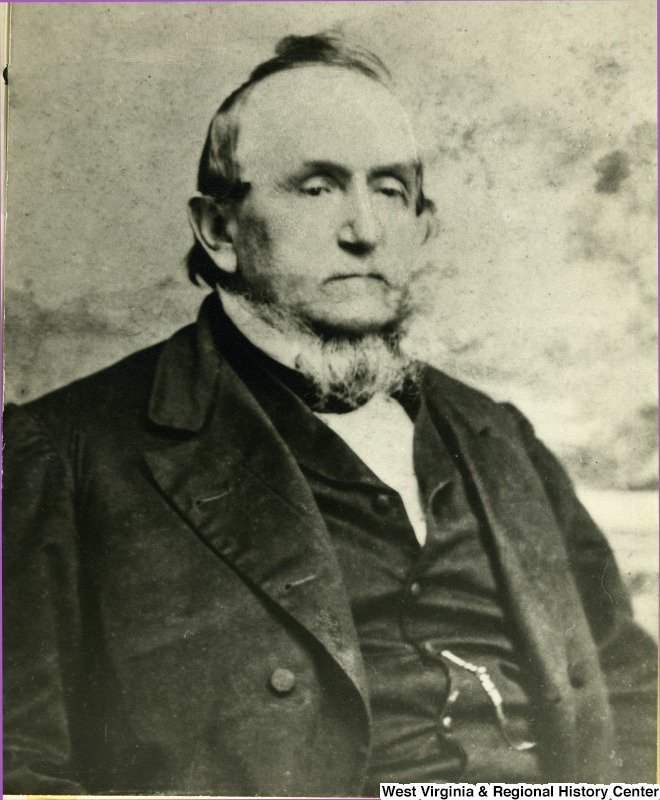 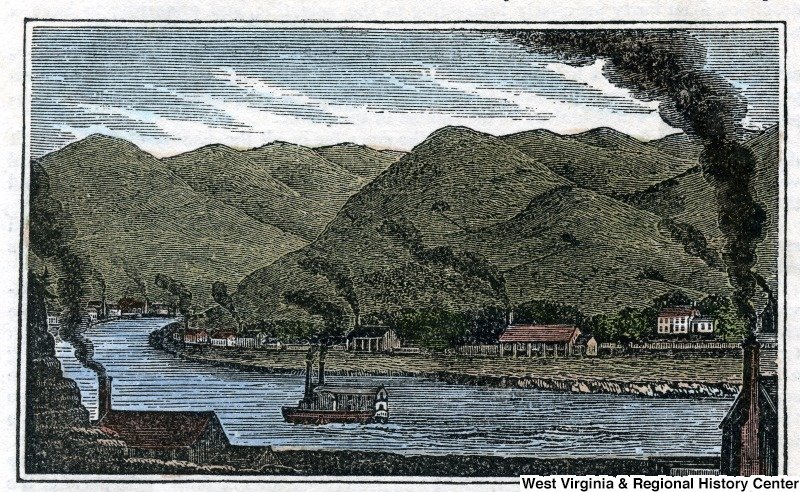 One of the earliest salt mines along the Kanawha River, near where the Ruffners made their fortune in the industry. West Virginia & Regional History Center. 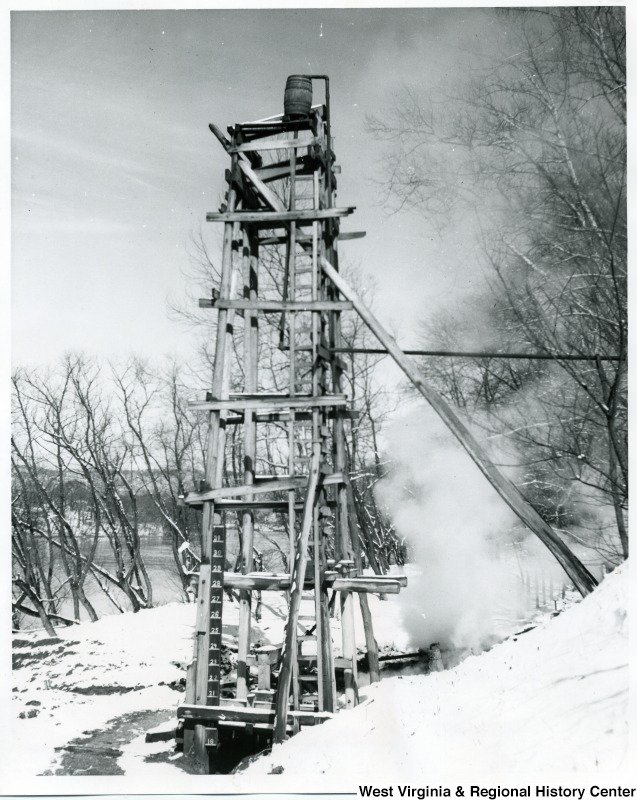 Another view of salt works along the Kanawha River. Parts of the Ruffner operation would have looked much like this. West Virginia & Regional History Center. 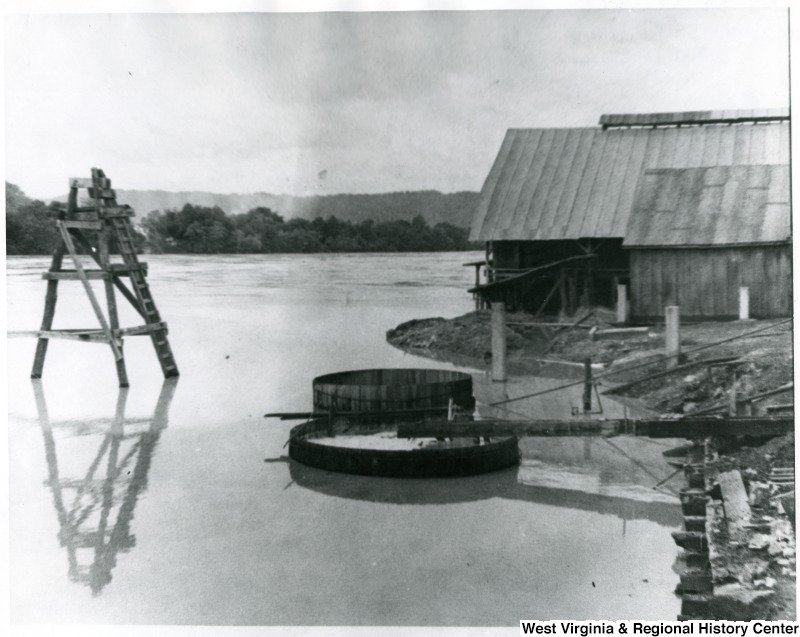 The "Flemish Bond" masonry pattern used on the façade of the Augustus Ruffner House. Wikimedia Commons. 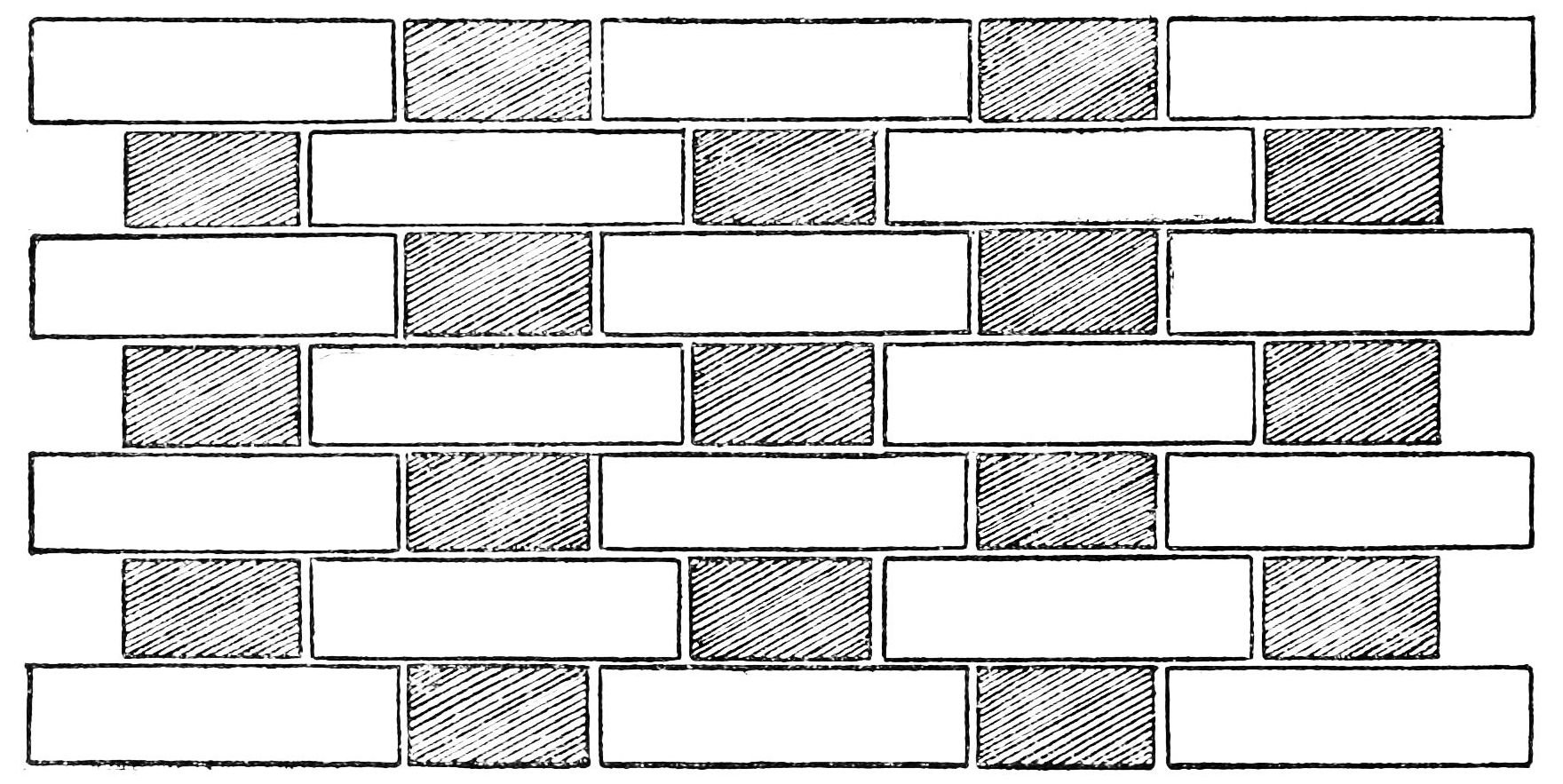 The front of the Augustus Ruffner house as it appeared in December, 1976. Photo courtesy of WV State Archives. 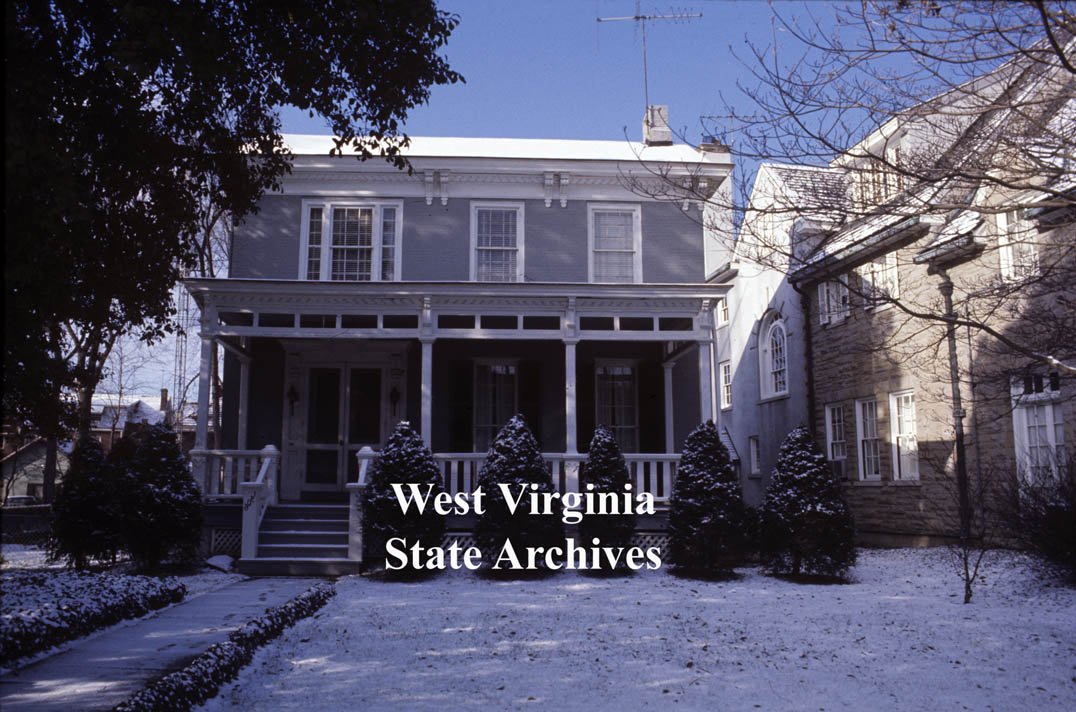 A present-day view of the house. Gray is not likely the house's original color, as it was an uncommon choice for the era in which it was built. Photo courtesy of Michael Keller and WV Encyclopedia. 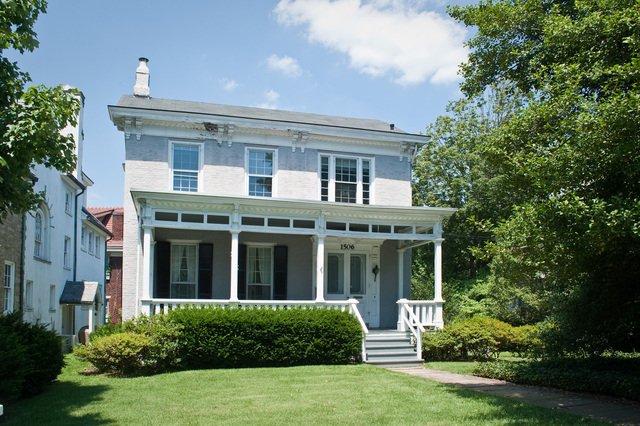 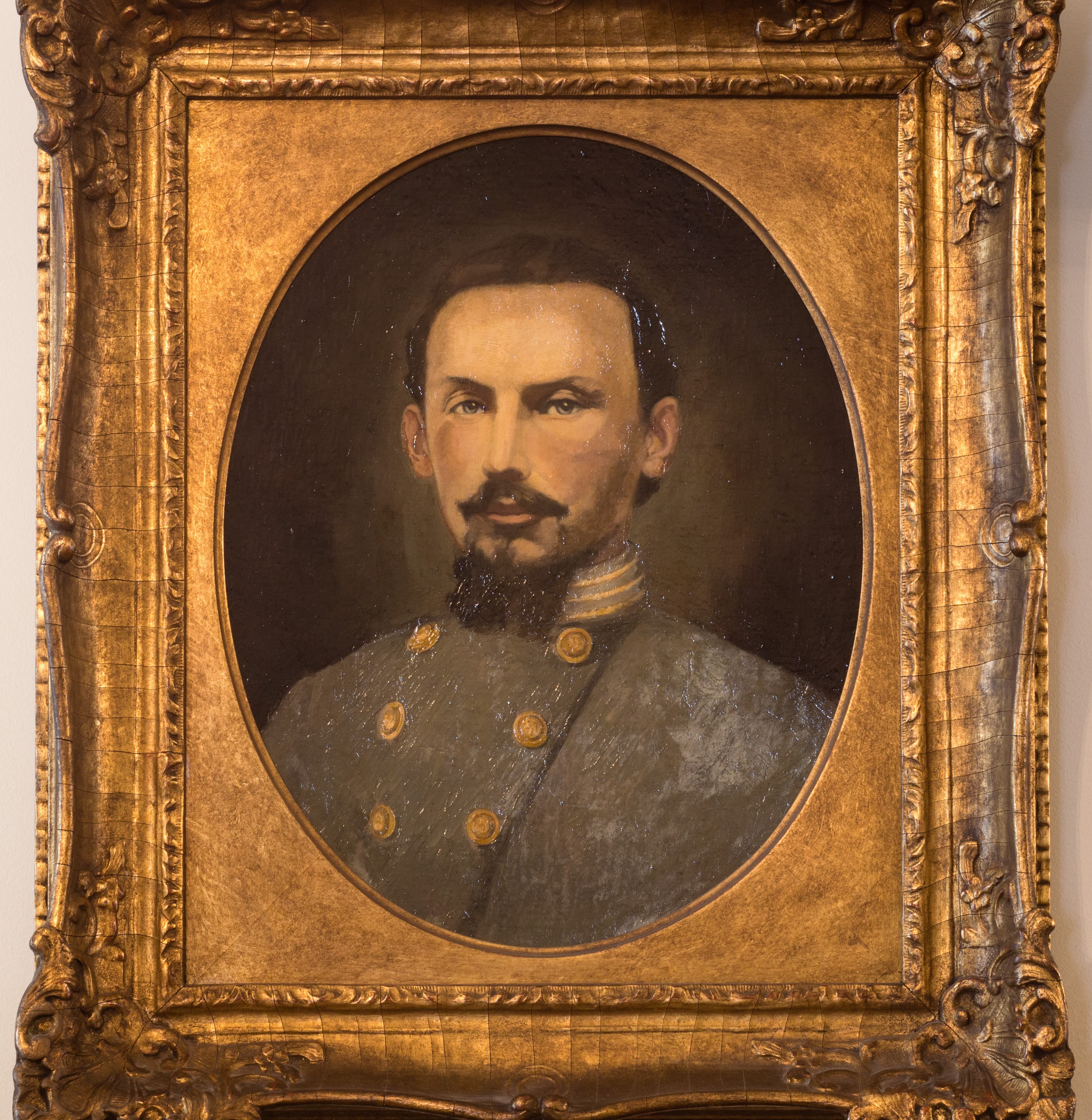 When Joseph Ruffner bought his first land holdings along the Kanawha River in 1795, the Kanawha Valley was mostly undeveloped frontier land that was sparsely populated by Native tribes and settlers of European descent. Conflicts between settlers and Native inhabitants were common before the American Revolution, but by the early 1800s, the region attracted settlers. Joseph Ruffner’s family were part of the initial wave of settlers, and he and his descendants played a pivotal role in the industrialization of the Kanawha River. Once minor port named “Charles Town,” the town of Charleston received its charter from Virginia in 1818. Following the Civil War and creation of the state of West Virginia, Charleston became the capital of the new state in the 1870s.

Like many settlers in western Virginia in the late 18th and early 19th century, Joseph Ruffner purchased his property in the Kanawha Valley before entering the region. Ruffner was attracted to the area by the region's salt deposits, and after moving his family to their new home from Virginia’s Shenandoah Valley, he purchased additional land. Ruffner acquired a thousand acres by the early 1800s. Most of Ruffner's efforts were dedicated to farming rather than mining salt, but he stipulated in his will that his sons would develop the property’s salt assets, or be forced to sell their inherited lands.

In 1807, several of Joseph Ruffner’s sons began an industrial-scale salt mining operation in the area near present-day Belle. They were so successful that by 1810, the Kanawha Valley was the United States’ leading region in salt manufacturing, a state of prosperity further cemented by the War of 1812, which cut off salt supplies from England. The “Kanawha Salines” would grow to produce 3.2 million bushels of salt annually--a staggering 160 million pounds. By 1845 they employed, directly or indirectly, roughly 3000 people,3 though a great many of these were slaves leased from local landowners.10 At Queen Victoria’s inaugural 1851 World’s Fair in London, salt from the Kanawha Valley reportedly won the “World’s Best Salt” award.12

Now wealthy from these economic exertions, the fifth Ruffner son, Daniel, built Holly Grove in 1815, which remains Charleston’s oldest surviving house. Daniel’s son Augustus did not follow him into the salt business, however, instead hewing closer to the footsteps of his agriculturally inclined grandfather. Given a plot of land near the intersection of the Elk and Kanawha Rivers (and extending eastward to present-day Ruffner Avenue), Augustus Ruffner chose lumber and farming as his professions and established a lumber mill on the Elk River where the waters’ current was more conducive than the more forceful waters of the Kanawha. Augustus later petitioned the Virginia House of Delegates to be allowed to conduct a ferry business across the Elk River. His petition was denied in 1842.

Shortly after marrying in 1834, Augustus built “Cedar Grove” a short distance from his father’s house at Holly Grove. Despite having made his name in lumber, he had this “neat residence”4 constructed of brick. The front of the house features a decorative masonry style called “Flemish Bond,” and the facade contains a number of other visual flourishes that scarcely could have been afforded by any but the socio-economic elite of the Kanawha Valley at the time, of which the prosperous Ruffners comprised a significant number.

Though a “steady and good business man, and possessed [of] a bright mind well cultivated,” Augustus Ruffner spent the last 18-20 years of his life in varying states of ill health, finally passing in March 18554 (or November 1857, depending on the source!).5 The house was left to his son, Henry Daniel Ruffner, who had not possessed it long before the Civil War broke out in 1861.

Like many families in what was then western Virginia, loyalties were sharply divided between North and South. Henry D. Ruffner, his brother Joel, and his cousin David Ruffner all served in the Confederate Army, as did two of Joel’s sons--whereas their cousin Lewis Ruffner was a staunch Unionist who became a Major General of Union militia and served as a delegate to the Wheeling Convention that later achieved the separation and statehood of West Virginia in 1863.

Beginning his Confederate service with Colonel George Patton’s Kanawha Riflemen, Henry D. Ruffner later transferred to the 19th Virginia Cavalry and rose to the rank of Major commanding first Company G, then the 46th Cavalry Battalion, and serving for the duration of the war. He was singled out for “honorable mention” at the Battle of Droop Mountain late in 1863.11 The unit served with distinction in the 1864 Shenandoah Campaign. By the time the Confederate armies disbanded in 1865, records show Henry D. Ruffner discharged with the rank of Lieutenant Colonel.

He returned to a much-demolished Charleston after the war, but was able to retain the house and some of his original properties. An abortive attempt at silver mining took him briefly to Colorado, but by the 1880s he had returned to Charleston and was contracted to work on the new State Capitol building.

The magnificent “Cedar Grove” house of Augustus Ruffner remained in the Ruffner family until 1940, and is now a commercial property. Augustus Ruffner is buried nearby the Ruffner family cemetery, which was later donated to the City of Charleston and modified to make Kanawha Riflemen Memorial Park. Henry D. Ruffner  and several of his descendants are buried in Spring Hill Cemetery overlooking Charleston.