The Theodore Roosevelt Inaugural National Historic Site (also the Ansley Wilcox House) is the historic home in Buffalo, New York where, on September 14, 1901, Theodore Roosevelt became the nation's 26th president. The home is one of the few sites where a presidential inauguration occurred outside of Washington D.C. The home opened as a museum in 1971. The museum offers an immersive experience, taking visitors back in time to the turn of the century Buffalo, which hosted the Pan-American Exposition in 1901. Exhibits describe the exposition and the assassination of President William McKinley, who was shot there and died a few days later on September 14. Visitors can also learn about Ansley Wilcox, owner of the house and a good friend of Roosevelt. The house was saved from demolition in the 1960s and placed on the National Register of Historic Places in 1985.

The Ansley Wilcox House in Buffalo 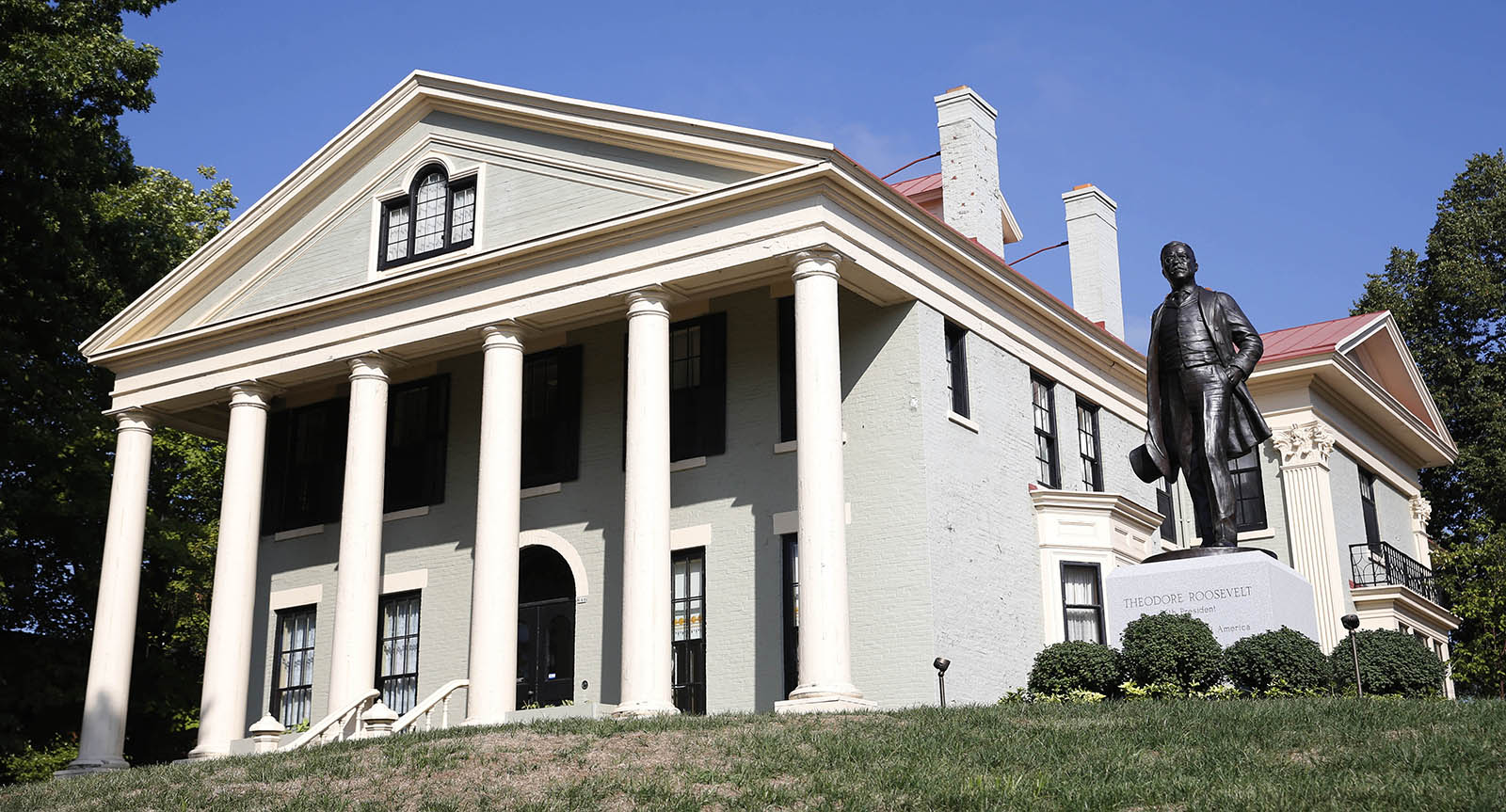 The Front of the Theodore Roosevelt Inaugural National Historic Site 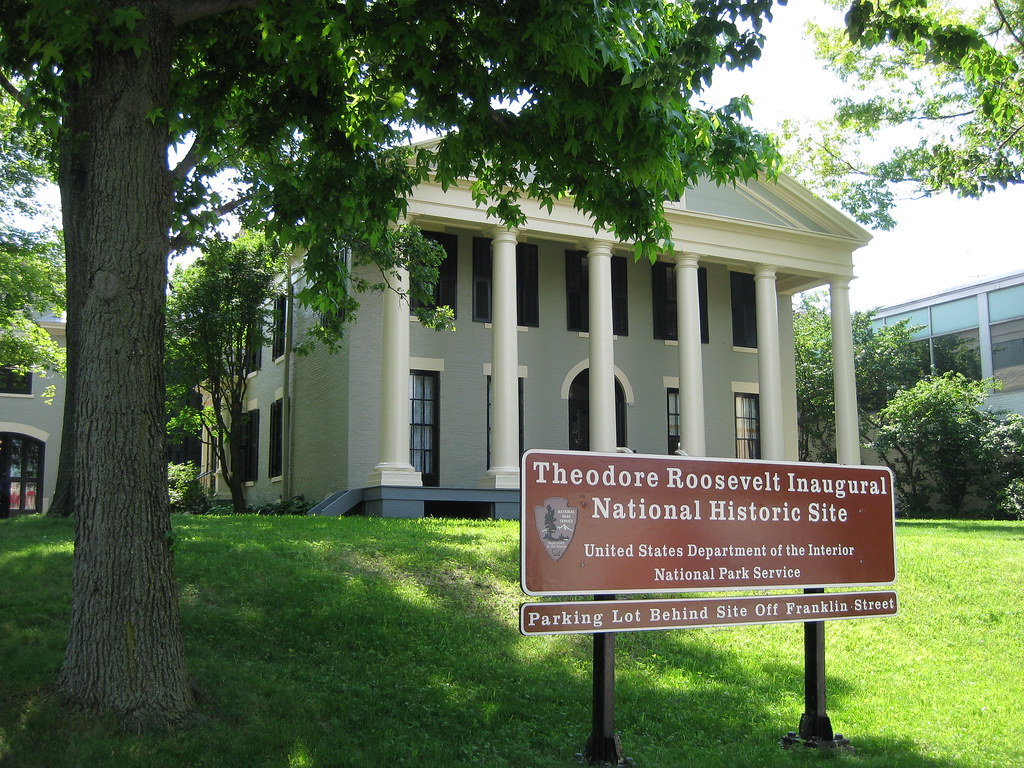 The Interior East Room on the First Floor, 1965 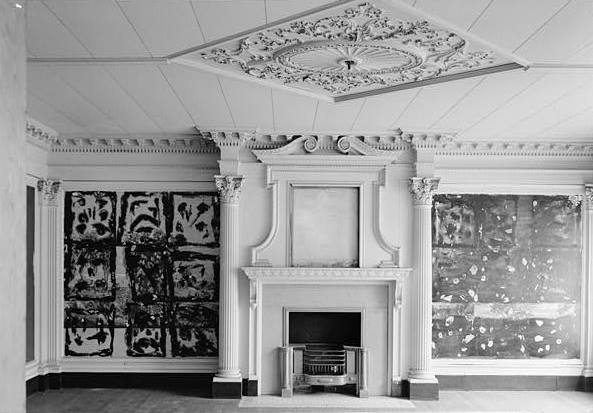 From 1939-59, the Ansley Wilcox House was Called the Kathryn Lawrence Dining Rooms 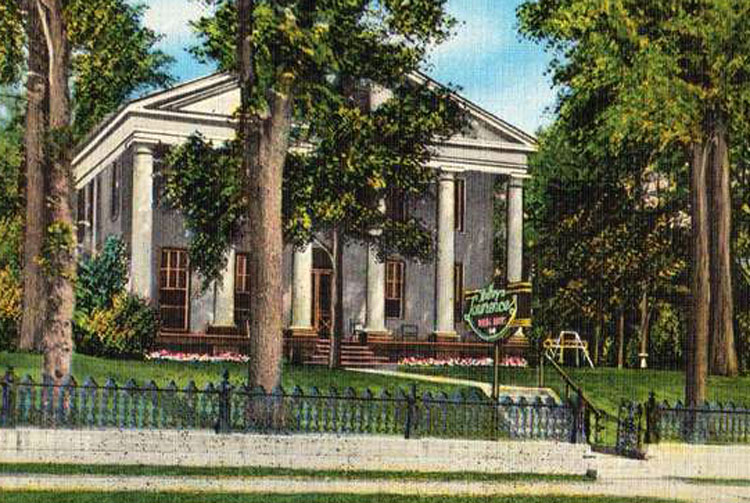 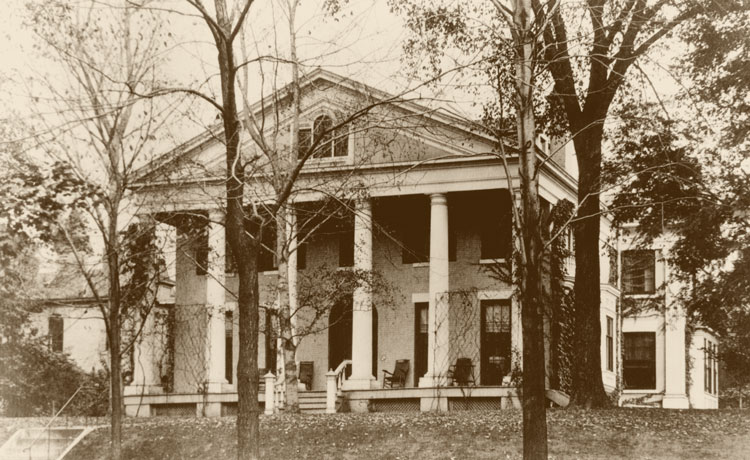 The Library of the Ansley Wilcox House, Where Theodore Roosevelt Took the Oath of Office 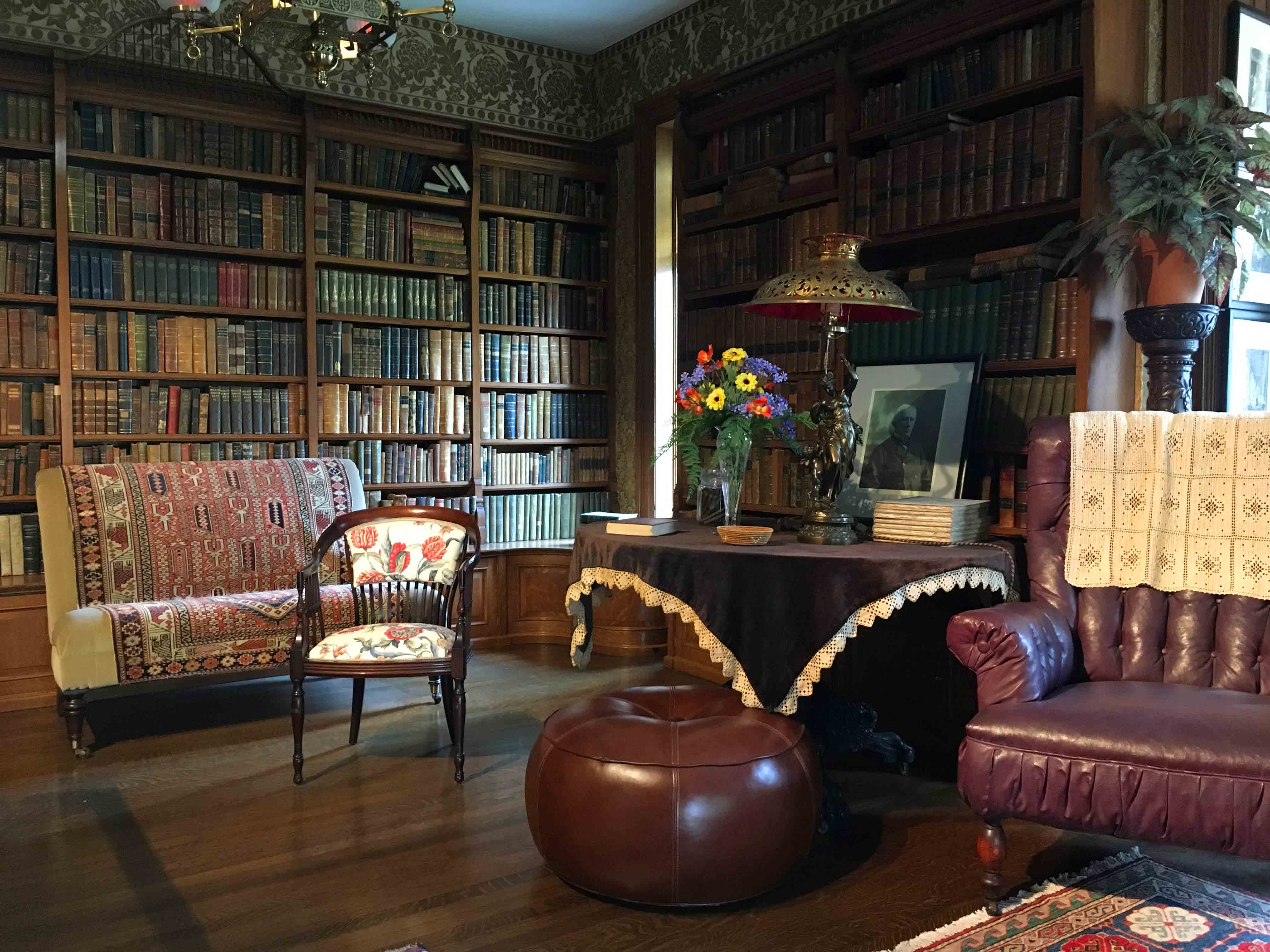 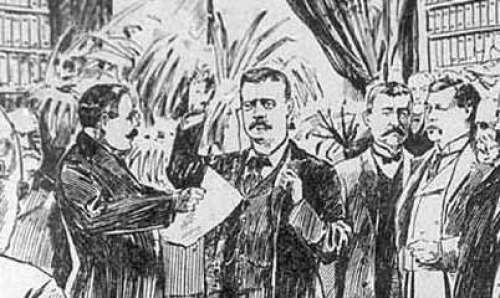 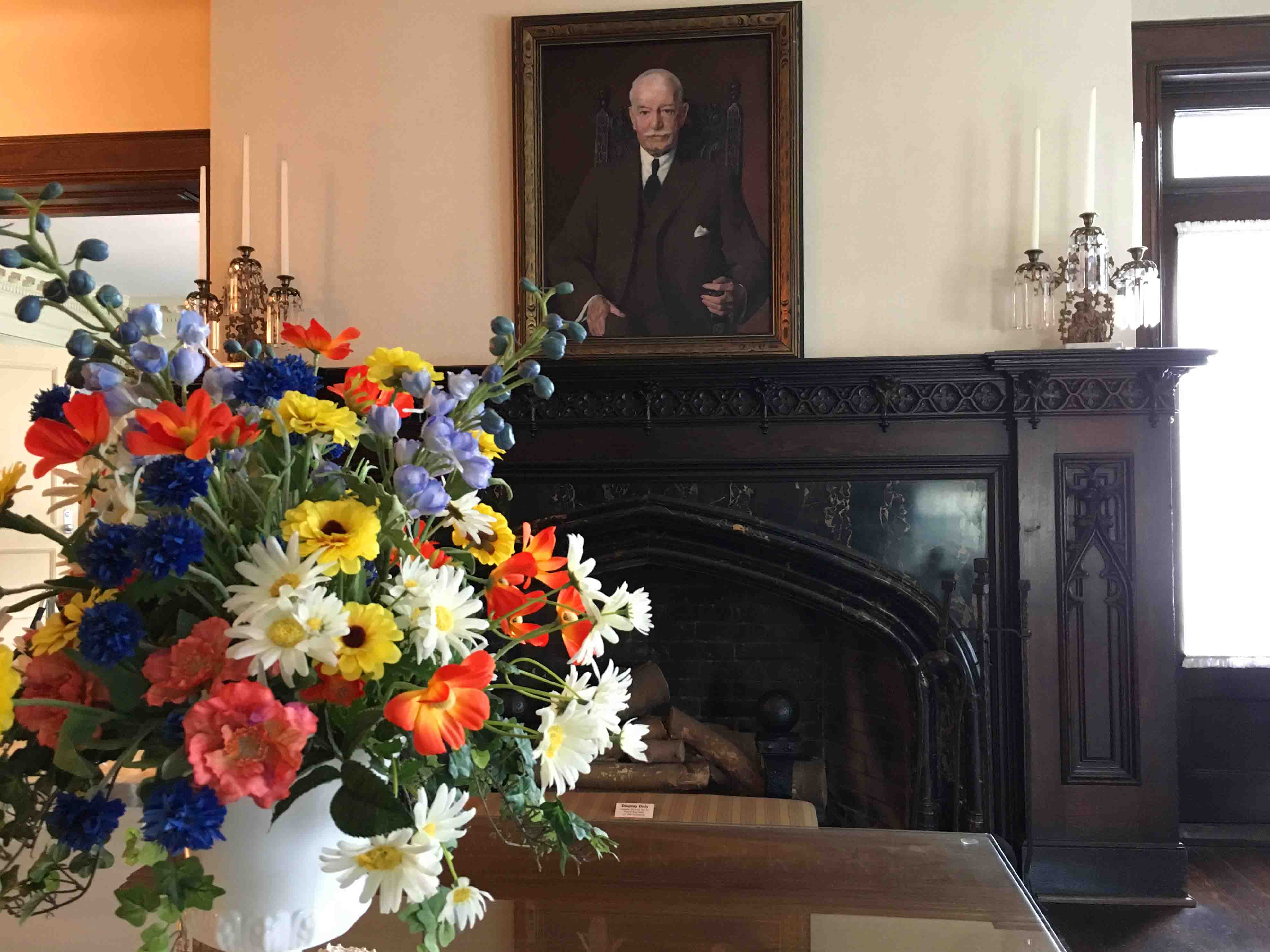 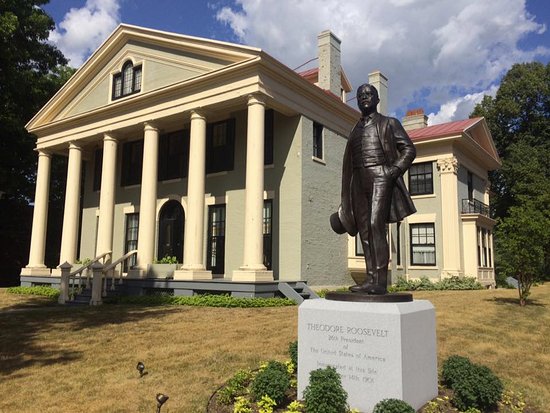 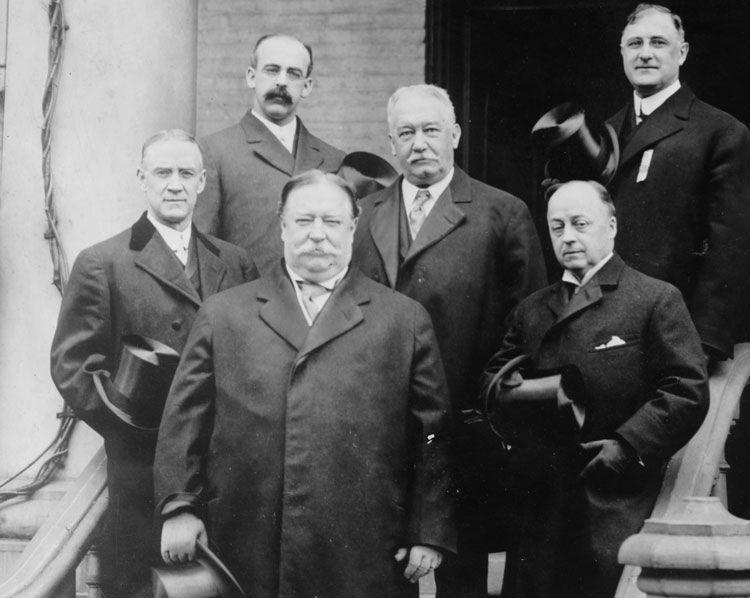 The historic house located at 641 Delaware Avenue in Buffalo, New York was first occupied by the Buffalo Barracks and sub-divided into a double home before the military installation sold it in the 1840s. After going through numerous owners, who eventually made it into a single home, the former mayor of Buffalo, Joseph Masten purchased the home in 1847 and lived there for close to ten years. In the early 1860s, an attorney named Albert P. Lanning purchased the home on Delaware Ave. and added a massive carriage house. Lanning died in 1880 and the home was sold again. In 1883, newly-wed Mary Grace Rumsey Wilcox received the home as a wedding gift from her father, and she and her new husband Ansley, a prominent lawyer and scholar, would call it home for 50 years. When the couple first moved in, the house only consisted of the old officers' quarters and a service wing at the back of the house. The Wilcox's destroyed the old service wing and added a larger addition to the house. These slight changes doubled the size of the Wilcox residence.

On September 5, 1901, President William McKinley was shot at the Pan-American Exposition in Buffalo by Leon Czolgosz. McKinley was rushed into surgery but doctors could not find one of the two bullets. Still, the operation went smoothly and the president was sent to a nearby friend’s house to recover. Vice president Theodore Roosevelt arrived in Buffalo two days later and set-up residency at his friend Ansley Wilcox’s house for a few days. After being reassured the president’s condition was improving, Roosevelt left and went hiking in the Adirondack Mountains. On September 13, he received a telegram saying McKinley had taken a turn for the worse and to return to Buffalo immediately. President William McKinley died in the early morning hours on September 14, 1901. Theodore Roosevelt was met at Buffalo’s train station by Ansley Wilcox, who took the new president back to his residence. It was there in the library on the afternoon of September 14 that Theodore Roosevelt was sworn-in as the 26th president. Newspapermen were let in for the ceremony but were not permitted to take photos. Roosevelt left Ansley Wilcox’s home on September 16 with McKinley’s funeral procession.

Both Mary Grace and Ansley Wilcox passed away in the early 1930s. Shortly thereafter, the family auctioned off the home's furnishings. It appeared the vacant house was heading towards demolition. Finally in 1938, a couple named Oliver and Kathryn Lawrence purchased the house and opened a restaurant. They removed many of the historic architectural features, as well as the main interior staircase, to create a restaurant layout. The historic carriage house that Albert Lanning built was demolished to make room for a parking lot. The Lawrences decided to honor the history of the house by using a presidential theme; they put up flags, plaques, and placed pictures of Theodore Roosevelt around the dining rooms. At the spot where Roosevelt had stood to take the oath of office, a star was placed on the ceiling. Kathryn Lawrence's Dining Rooms served as one of the most popular restaurants in the Buffalo area until 1959.

After Kathryn Lawrence's death, the Ansley Wilcox House was once again vacant and facing possible demolition. In 1963, the Junior League of Buffalo and other community organizations banded together to clean-up the house and save it. Finally, legislation was put forth to make the home a National Historic Site. Liberty National Bank purchased the property and held it until federal money began to come in. In 1966, the legislation passed and the Ansley Wilcox House became a National Historic Site and funds were used to restore and preserve the home. For two years it underwent extensive renovation and restoration and finally opened to the public on September 14, 1971, 70 years to the day of Theodore Roosevelt's inauguration in the library.

In 2009, a $2.7 million project was completed at what is now known as the TR Inaugural Site, creating a new and updated experience for visitors. The guided museum tours are designed to take visitors back to that fateful day in 1901 through a tour of the home and three restored rooms, as well as interactive exhibits and various audio-visual presentations. The TR Inaugural Site does an exceptional job at preserving the Ansley Wilcox House and presenting the story of September 14, 1901, when one of the most dynamic figures in political history ascended to the presidency.