Construction on the E.M. Hager & Sons Co. Building occurred in three staged with the main building finished in 1878 followed by additions in 1880 and 1920. The building represents a period for Buffalo where factories and warehouses dotted its urban landscape. Buffalo stood as the eighth largest city in the U.S by 1900 and served as a manufacturing hub. The historic building survives as a symbol of the type of commercial architecture common for the era. The changing nature of the business, focused first on timber-frame construction and then shifting to wood carvings and interior finishing (with wood) speaks to the city's building boom and transition away from wood framing to steel and concrete.

1970s photo still shows how the E.M Hager & Sons Building appeared for most of its existence. 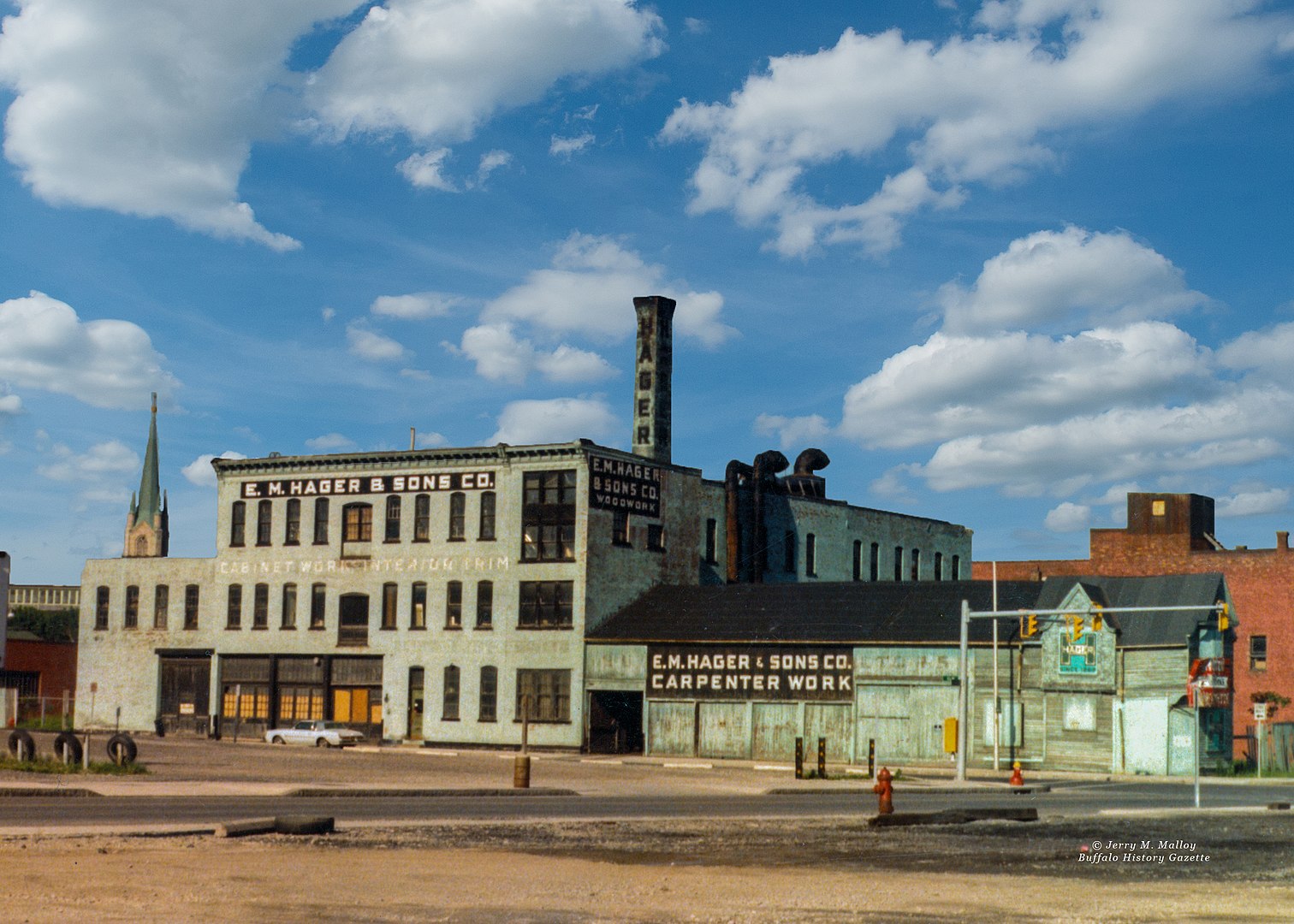 2020 Photo of the newly renovated and repurposed E.M Hager & Sons Building, now known as Planning Mill. The building is now home to residential and commercial space.

During the nineteenth century, investors viewed Buffalo's location on the Erie Canal and Lake Erie as advantageous, resulting in the city emerging as a commercial hub of Western New York. The E.M. Hager & Sons Co. Planing Mill, built in three stages (1878, 1880, and 1920), survives as an excellent example of the mid-nineteenth century manufacturing plants common during Buffalo's commercial boom. The company's history, one that transitioned from constructing timber-framed structures to one that focused on interior wood crafting, also speaks to the evolution of building from wood-framing to concrete and steel.

Buffalo's evolution into a manufacturing hub came with a boom for industries tied to construction as companies needed factories and warehouses while workers needed housing. E.M. Hager & Sons emerged as one of the most successful operations during the late nineteenth century. The company name comes from its founder, Edward M. Hager, a German immigrant who first worked with at his brother's grocery store before moving to New Jersey to learn carpentry. Hager's path back to Buffalo took a detour when Hagar joined the 68th Regiment of New York City during the Civil War. After the war, he returned to Buffalo and briefly worked in the flour and feed business before getting married and then focusing again on carpentry work. In 1868, Hagar established the E. M. Hager and Sons Company, having opened it the same year his second child (of five) had been born.

Hagar seized on the opportunities born out of an economic and building boom for Buffalo. Hager's company initially specialized in timber-framed construction, the most common construction method in the years following the Civil War, until steel and concrete framing arose during the late nineteenth century. The E. M. Hager & Sons Company expanded rapidly, mirroring the growth of Buffalo. By the mid-1800s, Buffalo benefited from thriving industries that included shipbuilding, meatpacking, lumber, and grain. By 1900, Buffalo stood as the eighth-largest city in the United States. Hager & Sons went on to construct a multitude of Buffalo's early factories, grain elevators, churches, schools, and private homes. In 1873, Hager built something less expected: the scaffolding for Buffalo's first public execution in Lafayette Square.

The elder Hager died in 1919, leaving his son August C. in charge, but August died one year later (1920) just as the company added its last addition to the E.M. Hager & Sons Co Building. As a result of their passing, the company went to George J., who managed the family business until 1954. During George's tenure, the company largely transitioned to interior furnishings. In 1926, the company started producing store fixtures, tavern bars, and equipment for schools and banks to go with its elegant, wood-carved interiors found in many of Buffalo's mansions.

Hager Companies. "Hager History: Learn more about the 170-year legacy that built Hager Companies, and the dedication that continues to drive us today." https://www.hagerco.com/aboutus/hager-history.