Louise Bethune, perhaps the first full-time professional female architect in the United States, designed the Hotel Lafayette in 1902. Five years earlier, the city harnessed Niagara Falls as a source of electricity and this hotel became the first in the city to provide electricity to its guests along with hot and cold running water and a telephone in each room. Buffalo's most luxurious hotel until the mid-twentieth century, Hotel Lafayette hotel experienced a substantial decline during after the 1960s as hotels along the interstate eclipsed those near rail stations and downtown business districts. An extensive renovation project after 2010 restored the hotel to its former status as a high-end hotel, a reflection of the returned growth of downtown Buffalo as a destination for travelers and business.

1908 photo of the Lafayette Hotel 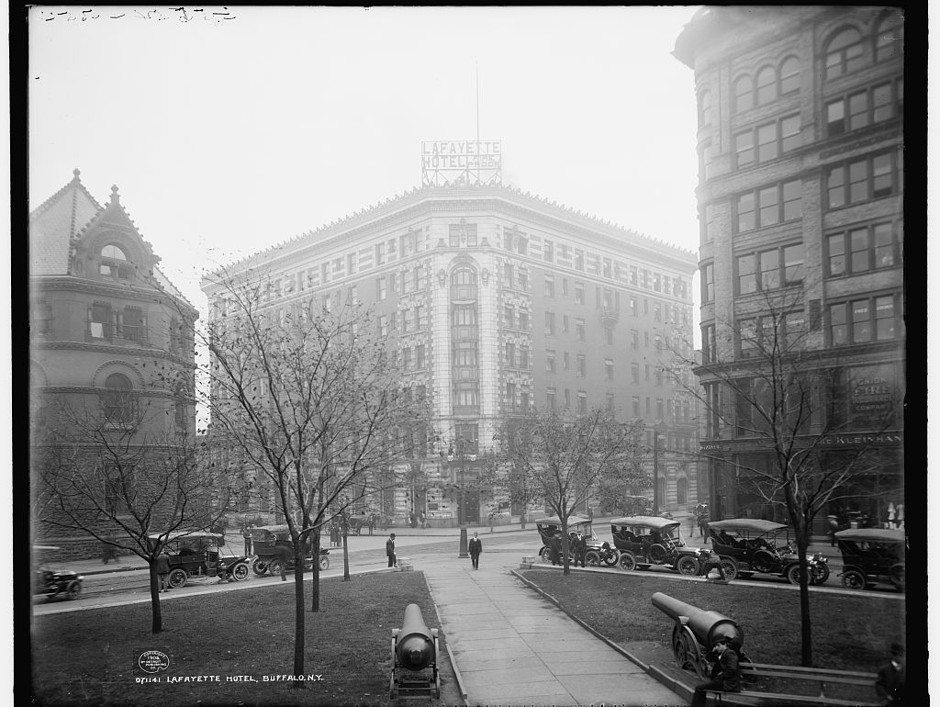 2009, before the renovations of Hotel Lafayette began 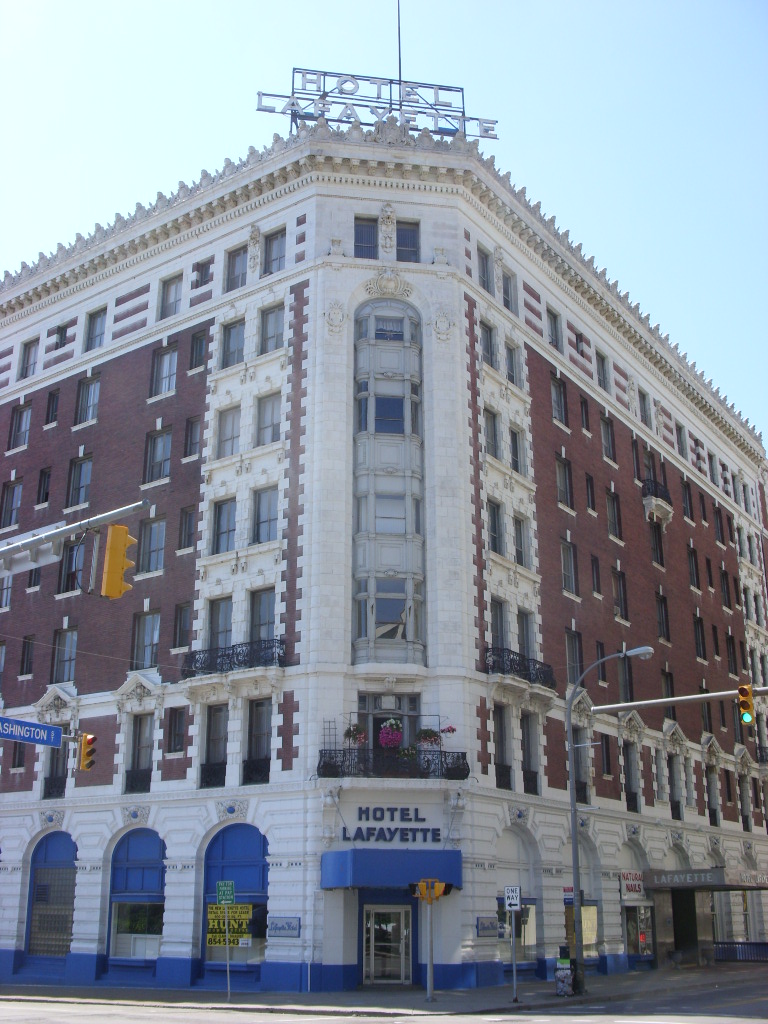 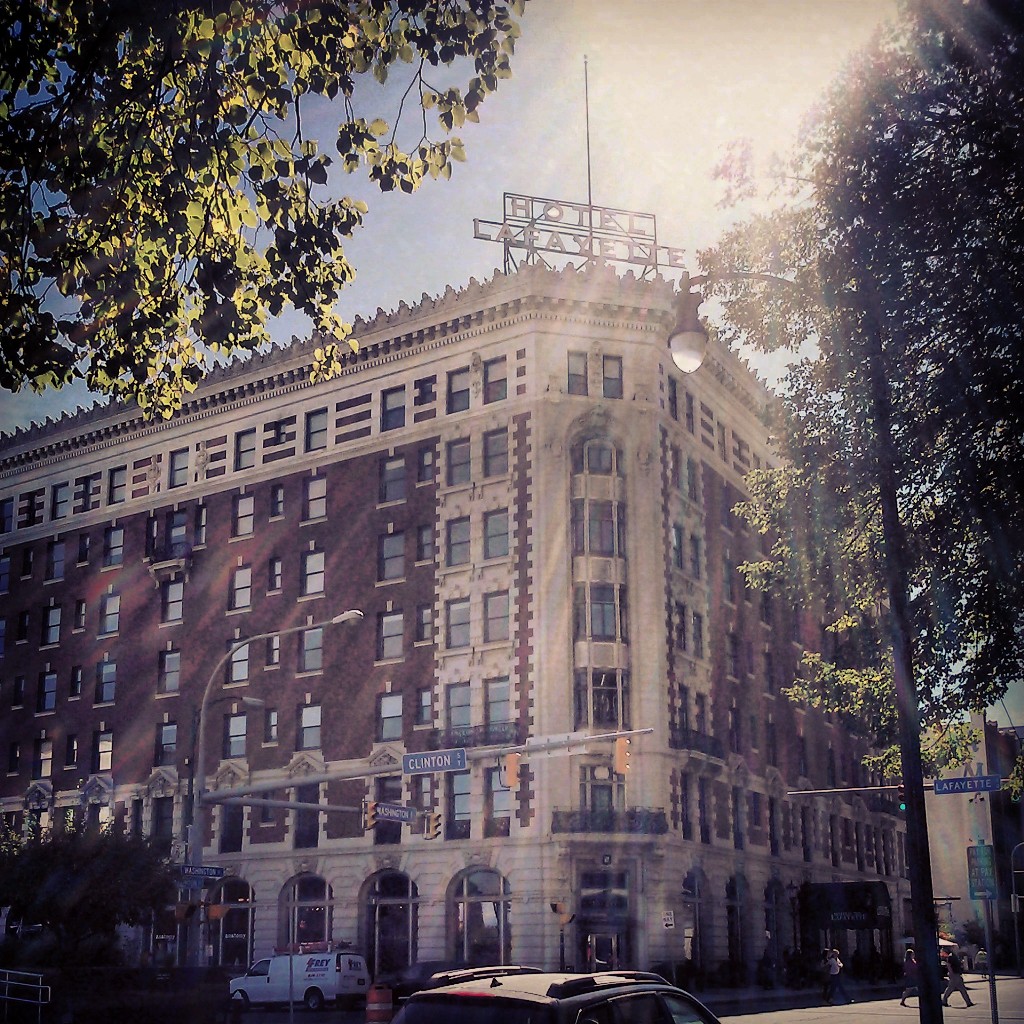 Louise Bethune, the country's first professional woman architect, designed The Hotel Lafayette opened in 1902 shortly after the city hosted the successful 1901 Pan-American Exposition. (Although, a gunshot mortally wounded president McKinley at the Fair ). Buffalo's population grew from slightly more than 80,000 in 1860 to 352,387 by 1900, climbing to the nation's eighth-largest city. By the turn of the century, Buffalo also supported more than sixty millionaires and a robust economy.

In 1897, Buffalo harnessed the power of the Niagara Falls as a source of hydroelectric power, which provided electricity to Buffalo. The Hotel Lafayette benefited by technological feat by becoming the first hotel to have electricity. Other firsts included offering guests hot and cold running water, a telephone in each room, and all-inclusive services comprised of laundry, a billiard room, a reading room, restaurants, and a tobacconist. Another first involved the hotel's architect, Louise Bethune, the country's first professional woman architect and first female member and Fellow of the American Institute of Architects. In addition to the amenities, the ornate, French Renaissance hotel served as the first to have a fireproof design.

A remodeling project during the 1940s replaced the French Renaissance details with and Art Moderne style, popular during the era. By the 1960s, the hotel showed its age, correlating with a city suffering from a bad economy. The hotel closed, the roof leaked, the structure exhibited tremendous decline overall, which increased throughout the twentieth century. The hotel's second life arrived in 2010 when developer Rocco Termini purchased the historic building with a plan to restore it. One discovery of the renovation process included uncovering an enormous wall painting by American impressionist, Abbott Graves. The architects also discovered a false floor in the main hallway covering a staircase descending to a hidden speakeasy. The speakeasy makes sense given that Hotel Lafayette's primary financier was a Rochester distiller. Indeed, the hotel's restaurant was the first to serve alcohol after prohibition ended.

Library of Congress via https://www.bloomberg.com/news/articles/2013-06-21/remembering-america-s-first-female-architect.