When the eight-story H.A. Meldrum Company Building opened in 1909, the building was home to the local company's second store in Buffalo. Herbert Alexander Meldrum opened his first store in 1897, and in so doing, built upon the dry goods and retail legacy led by his father, Alexander, who opened the locally renowned Adam, Meldrum & Anderson (AM&A) in 1867. Meldrum enjoyed exceptional success for decades until troubles forced the sale of the company in 1922 to E.W. Edwards & Sons Co, another retailer who occupied the building until 1952. Today, the building serves as a luxury apartment complex known as The Antonio.

The Meldrum name remains etched into the brick on the top floors of what is now The Antonio luxury apartment building. 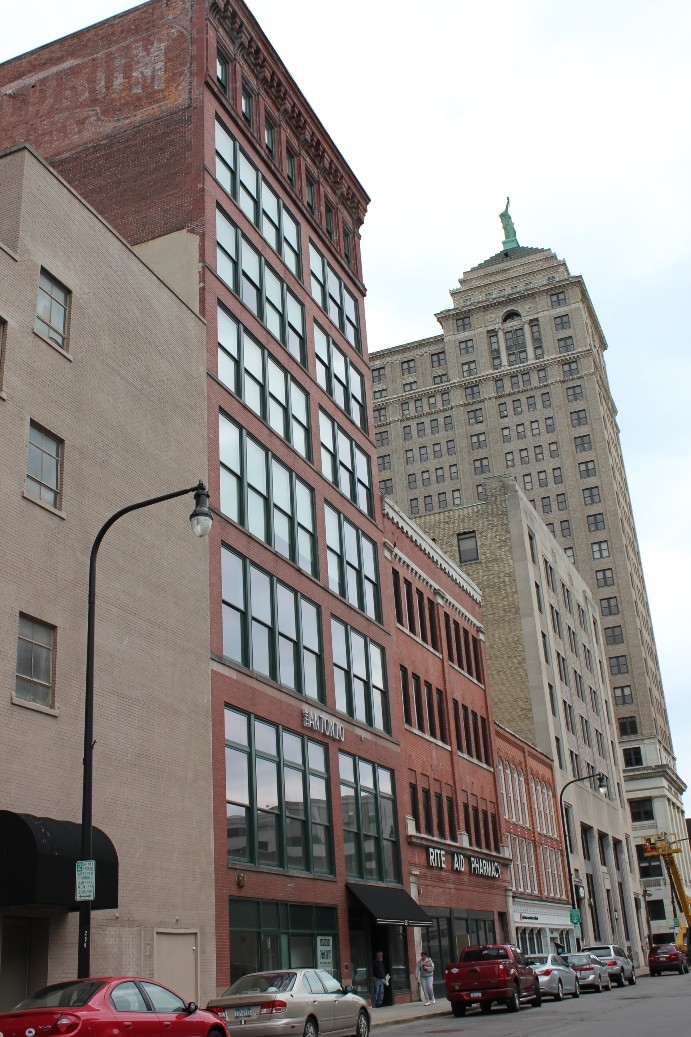 By 1880, roughly 55 years after the opening of the Erie Canal that connected New York City to the Great Lakes through Buffalo, the population of Buffalo had expanded from 1,500 in the early nineteenth century to 155,000. The population exceeded 350,000 by the turn of the century as the city's street-car suburbs developed in association with a residential building boom throughout the metro area. In 1896, Buffalo and its suburbs reaped the benefits of hydroelectric power generated at Niagra Falls. One year later, the H. A. Meldrum Company established its business serving both city residents and those who commuted to the city from the suburbs.

The concept of the department store emerged in New York City during the 1860s, but its popularity grew substantially around the turn of the century in association with the rise in consumer culture and ease for which items were mass-produced and shipped during the Second Industrial Revolution. Department stores evolved into businesses that not only made goods readily available but turned shopping into a recreational activity.

Herbert Alexander Meldrum (1870-1960) was the son of Alexander Meldrum, a prominent Buffalo businessperson and founder of Adam, Meldrum & Anderson (AM&A), Buffalo's largest and most well-known department store for more than 125 years. Herbert Meldrum worked for his father until 1897, when he decided to open his own store. By 1898, Herbert introduced the first automobile delivery service -- using an electric car -- in Buffalo. In 1906, he brought attention to his store when he sponsored the city's first power-propelled airship flight, which landed on the H.A. Meldrum and Company Building roof. His company grew so successful that Meldrum decided to add to his company's original five-story store located on Main Street.

During the 1910s, he also served for seven years as a member of the Buffalo State Hospital board of managers, Chamber of Commerce president for three terms (starting in 1913), the first American Savings Bank president (established 1907), and then its chairman of the board. Typical of wealthy entrepreneurs and elites during the Gilded Age, he also belonged to numerous social clubs.

The company remained in the historic building address until financial issues forced Meldrum to go into receivership in 1922. As a result, the Meldrum company sold the store and all of its assets to the E.W. Edwards & Sons Company, an established merchant based in Rochester and Syracuse. Edwards & Sons remained in the building until 1952. Thus, from 1909 to 1952, the structure functioned as a popular shopping center. But, from 1952 to the early twenty-first century, the building enjoyed a much less exciting history. Finally, in 2013, an expansive renovation project breathed new life into the historic building, converting int into a luxury apartment complex (The Antonio) on the top seven floors with the bottom floor used as commercial space.