The ornate, Colonial Style Karnak Flats apartment building arose in 1898 at a time when Buffalonians increasingly enjoyed the use of electricity and the city grew into the nation's eighth largest. Apartment living increasingly grew popular as the nation urbanized and space for land decreased. The middle and upper classes sought apartments that included amenities, luxuries, and plenty of space -- the Karnak offered that. But, by the 1920s, a booming economy allowed for a surge in apartment building leaving the Karnak to look old and out of date in comparison. By the Great Depression of the 1930s, the apartment sizes were cut in half and the renters transitioned from wealthy to laborers, and eventually the building functioned as public housing during the 1970s. Today, it again stands as a middle-class apartment building. 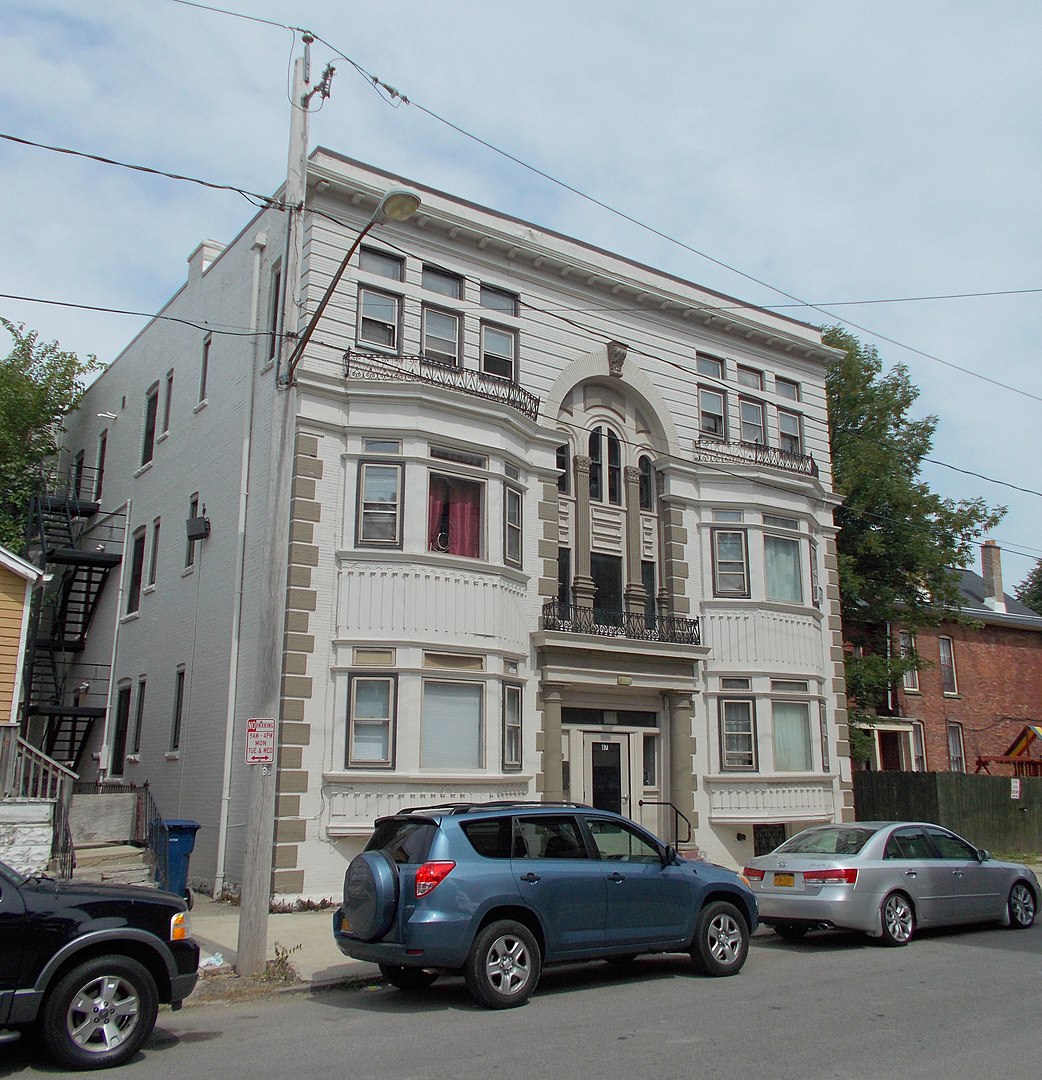 For most of America's existence until the Civil War, apartment living enjoyed little popularity. A spacious (and expanding), mostly agrarian country where owning land enjoyed substantial value culturally, politically, and economically, prevented much need or desire for multi-dwelling living. However, the late nineteenth-century industrialization and urbanization (along with increased immigration) led to a need for cheaper residential buildings, notably in massively growing cities like New York. As cities continued to thrive, populations grew immensely, leading to soaring property values and decreased land availability. Thus, apartments eventually catered to every class, with wealthy residents moving into ornate, spacious apartments filled with amenities. As cities grew overly congested and dirty around the turn of the twentieth century, residents with financial means took advantage of the advances in transportation such as local trains that connected cities to growing suburbs. And eventually, the automobile made its presence felt in American culture. Thus, residents moved away from the city to outer suburbs. The urban mindset and acceptance of apartment living continued to make apartment development a popular choice in the suburbs, notably among young professionals and newly married couples.

The Karnak Flats mirrored the broader, national trend in apartment living. The Flats emerged in a well-established suburb that formed shortly after the Civil War. Moreover, construction of the apartment complex occurred roughly the same time Buffalo and vicinity first received electricity from Niagara's waters; the city and nearby suburbs increasingly became electrified. The spacious layout of the Karnack Flats speaks to the financial makeup of its residents. The design consisted of two apartments per floor, each with seven rooms. And, each residence contained a host of modern amenities.

Still, Karnak tenants stayed for a relatively short period before moving even further from the city to newer suburbs developed during the economic boom of the 1920s. Thus, skilled and unskilled workers begin to displace the wealthy residents at Karnak. As the socioeconomic makeup of the complex changed, so did the layouts. The apartments were divided in half during the 1930s (Great Depression) so that more residents filled the building, but all enjoyed less space. Each passing decade, notably because the apartments showed their age, the tenants' economic makeup continued to move towards the impoverished; by the 1970s, the Karnak functioned as public housing.

Like most cities during the twenty-first-century, there's been an increase in renovating nineteenth-century structures, turning them into apartments and retail spaces. The Karnak Flats sold in 2014 for $4,316,290, and the building again serves as an apartment complex.