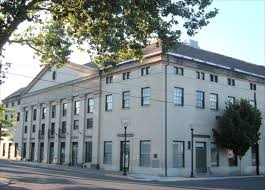 The Dalles Civic Auditorium is a historic building on the National Register of Historic Places. It was an important center of cultural and recreational activity for its community and region, and after more than a decade of dereliction and disuse, has been partially restored with plans in place for complete rehabilitation. The facility is becoming, once again, the site of public and private events. 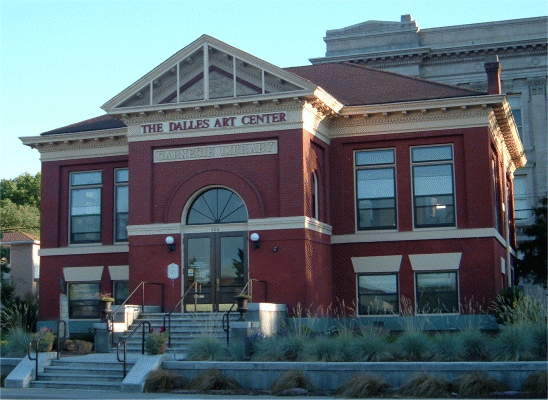 Located in the historic Dalles Carnegie Library, the Dalles Art Center is dedicated to promoting the arts to the community. To this end, it offers a variety of classes, exhibits, and other programming. It also hosts an annual art auction. The building was constructed in 1910 and was named after philanthropist Andrew Carnegie, who donated funds to thousands of communities to help them build libraries. The former library is a fine example of Beaux-Arts architecture and is also significant for helping spur the construction of other civic buildings in the immediate area, including the Wasco County Courthouse. 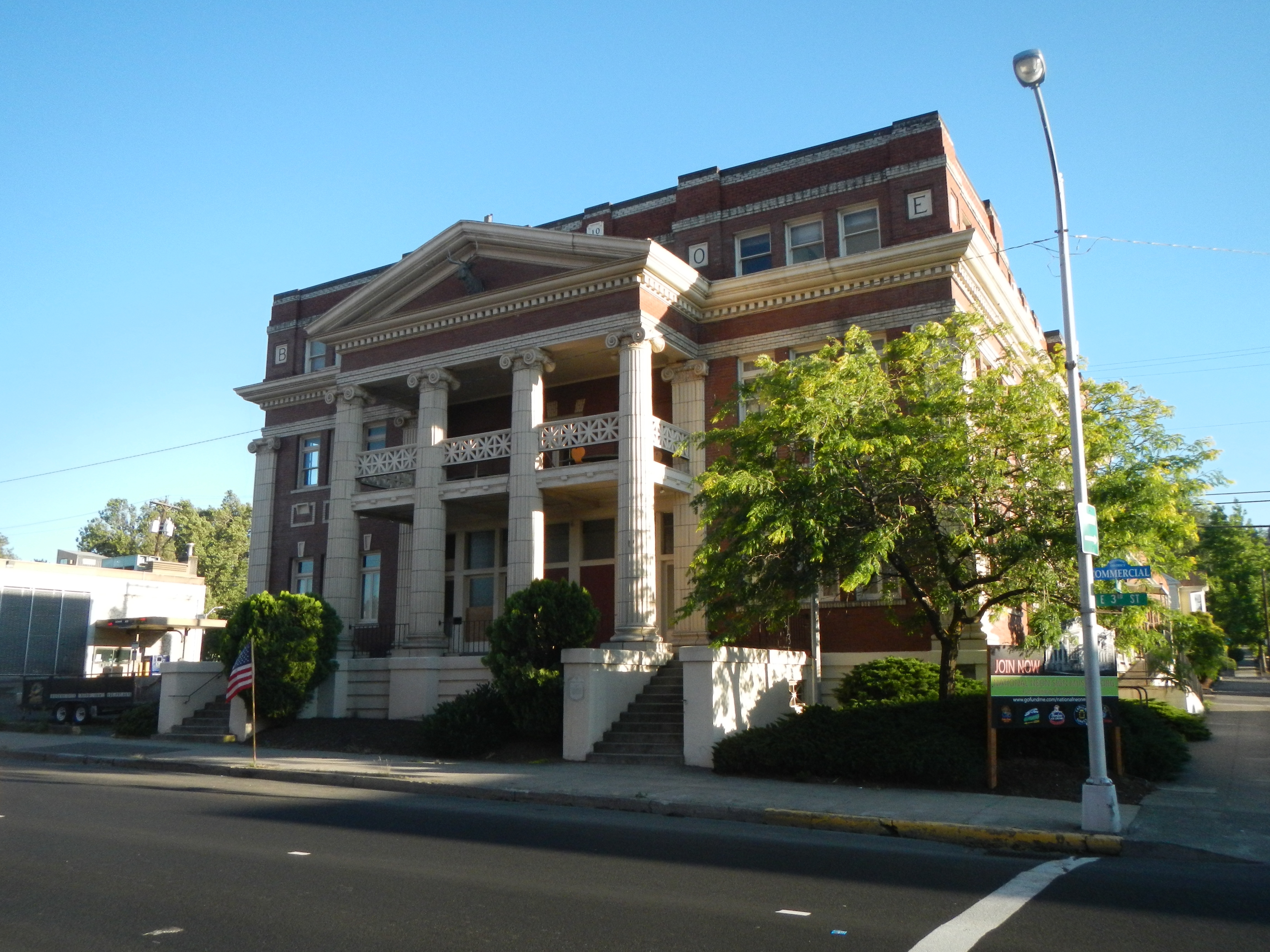 The National Neon Sign Museum houses one of the world’s largest collections of neon signs. The collection reflects American history through the evolution of signs and advertising. Highlights include the animated and figural ‘Dog n’ Suds’ sign, Howard Johnson’s ‘Simple Simon’ sign, and rare West Coast petroleum signs. The museum opened in 2018 and is housed in the historic former Elks Lodge building, which was erected in 1910. The Elks, which is a fraternal organization officially called the Benevolent and Protective Order of Elks, occupied the building for several decades at least through the 1980s. The building is also significant for its Colonial architecture. Notable features include large Ionic columns supporting a pediment and balcony, and four pilasters (columns) with Ionic capitals on each corner. The building is also known for its unique spring-loaded hardwood floor in the ballroom. 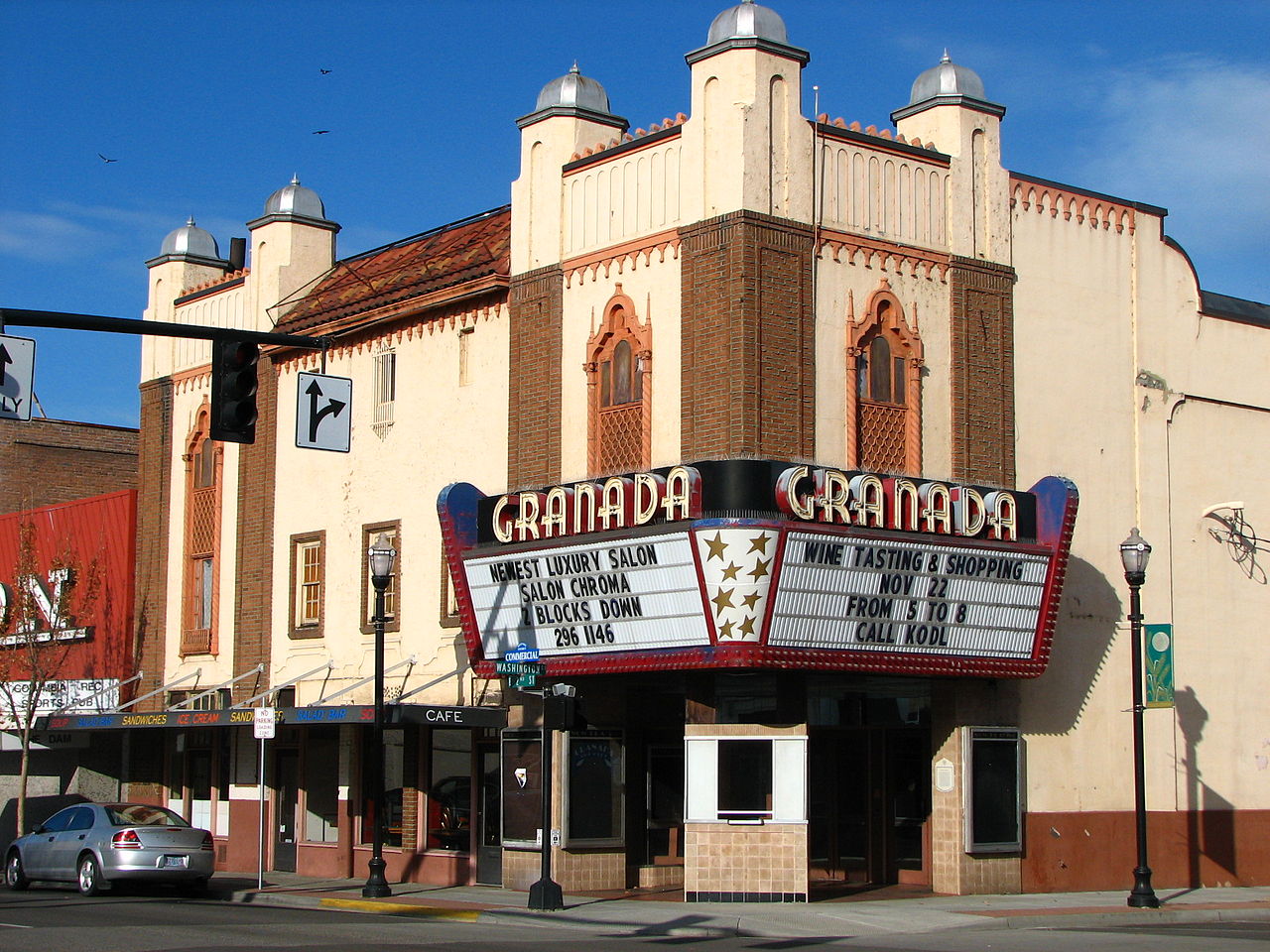 The Granada Theater has entertained visitors in The Dalles since it was built in 1930. It was the first movie theater west of the Mississippi River to show "talkies" and its distinctive Moorish Revival architecture makes it one of most recognizable landmarks in the city. Notable features include domed towers, an arcaded parapet, horseshoe-arched windows with twisted spiral columns, and a marquee that wraps around the southeast corner. It is a contributing property of the The Dalles Commercial Historic District, which is listed on the National Register of Historic Places.

The former United States Post Office in downtown The Dalles is a striking example of Greek Revival architecture. It was built in 1916, becoming the first building the federal government erected in the city. While no longer functioning as a post office, it remains an important landmark as it represents the role the federal government has played in The Dalles. In terms of architecture, the building features a symmetrical design, sandstone facade, and a grand colonnade with large Corinthian columns, among other decorative elements. Today the building is home to a private company. 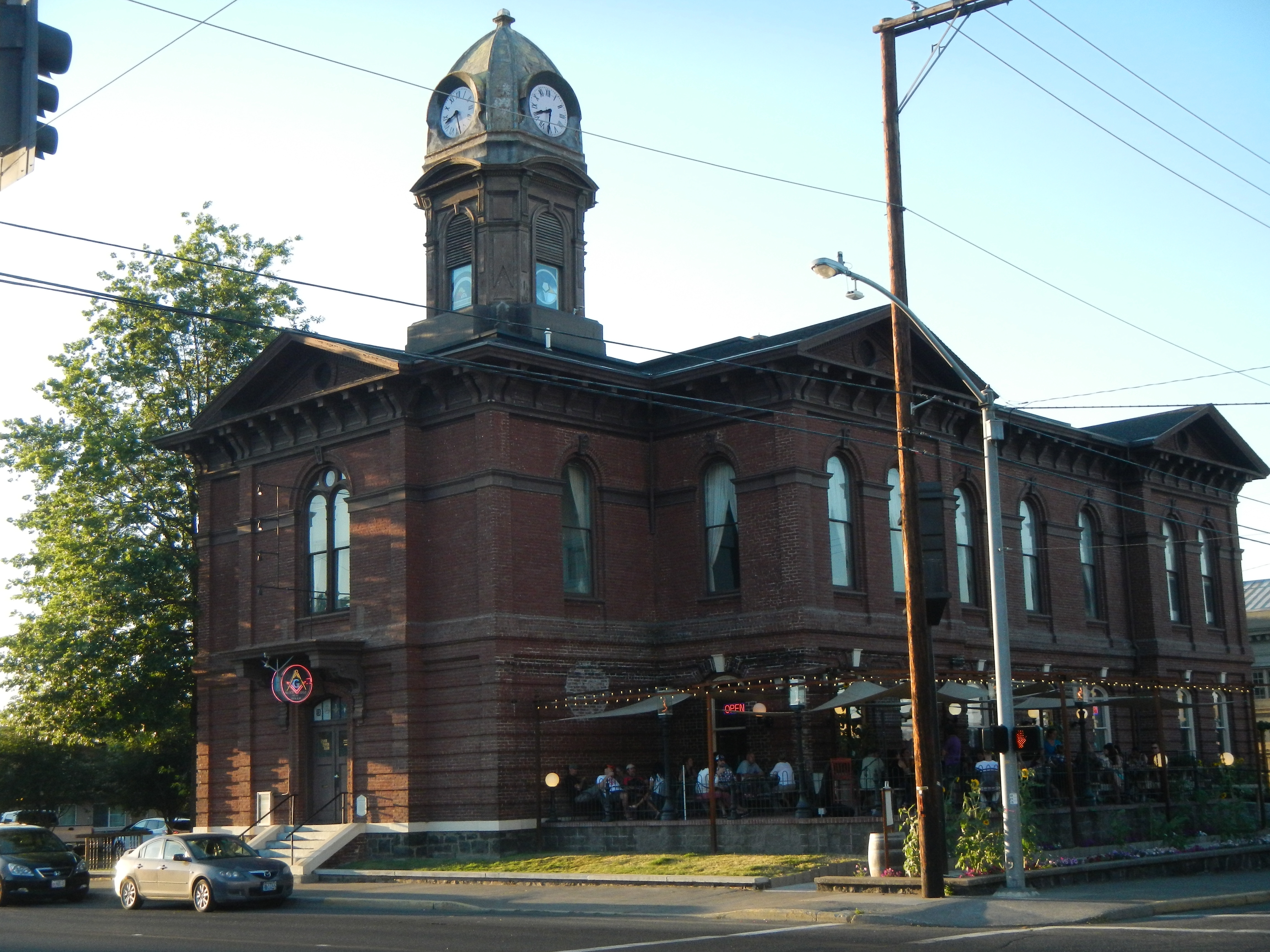 This attractive building, which is now home to a pub, was Wasco County's second courthouse. It was built in 1883 and replaced the first courthouse, which was built in 1859 and is now a museum. The building is a fine example of Italianate architecture and resembles an Italian villa. The red brick building is two stories tall and has arched windows, a low-hipped roof, and its most prominent feature, the octagonal clock tower. The tower features an elongated domed metal roof, windows, and clocks on all four sides.

Built in 1898, the former St. Peter's Catholic Church has remained an enduring landmark in The Dalles. Now known as Old St. Peter's Landmark, the former church is a striking example of Gothic Revival architecture. Its most prominent features is the steeple, which rises to height of 176 feet and is topped by cross and rooster weathervane. Other notable features include the red-brick exterior, stained glass arched windows, buttresses, and a statue of St. Peter in a niche above the main entrance. The old church has operated as Old St. Peter's landmark since 1971. It hosts weddings, concerts, and other events. The building was added to the National Register of Historic Places in 1974. 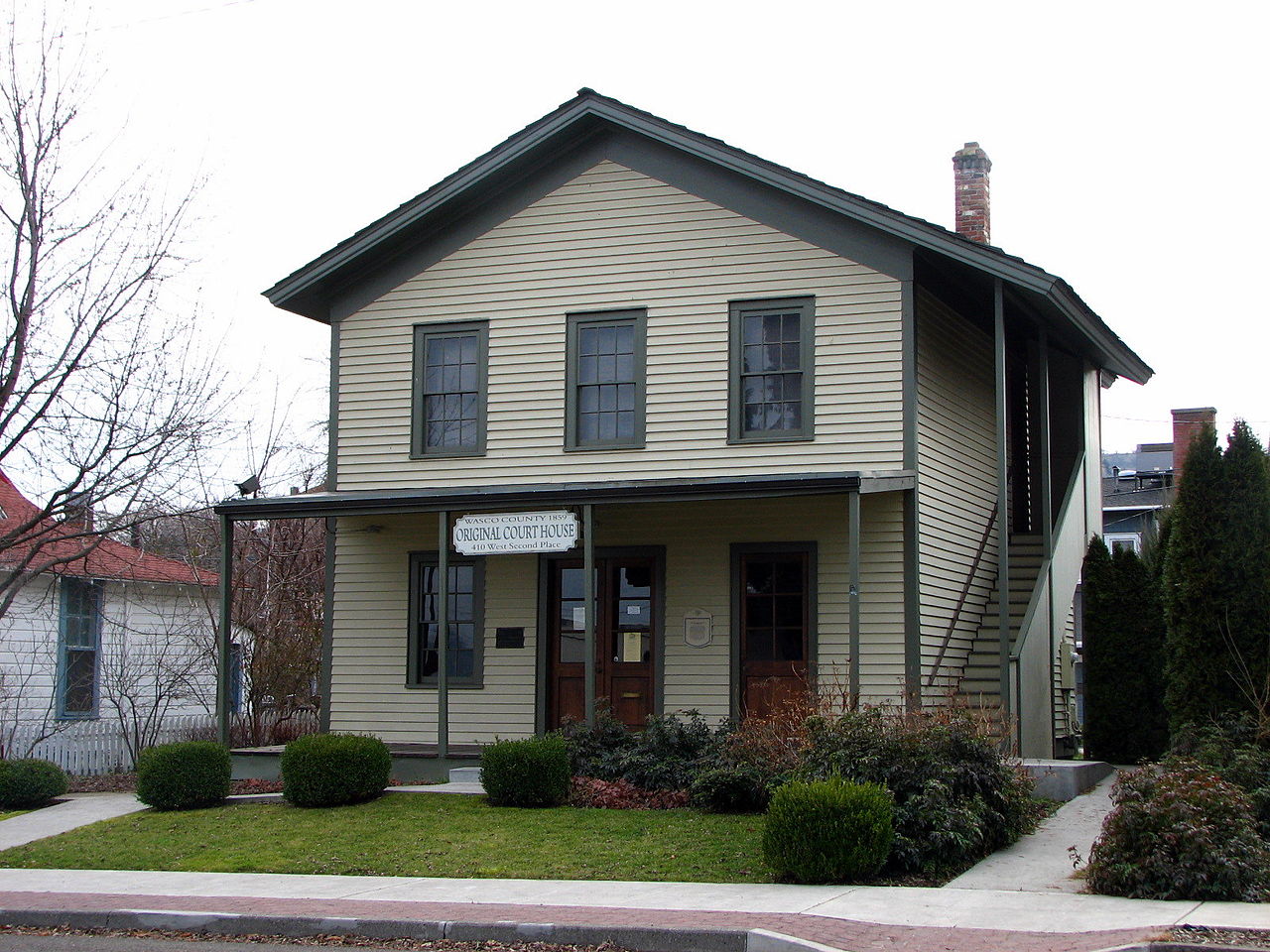 Although it might not look like much today, this small building was Wasco County's first courthouse. It was constructed by a local builder in April 1859, just two months after Oregon was granted statehood. Designed with elements of the Federal style, it is a good example of vernacular architecture and has been well preserved. The courtroom was located on the second floor while the Clerk's Office, Sheriff's Office, and three jail cells were on the first floor. Over the years, the building has operated as city hall, a private house, and a boarding house. It is now a museum operated by the Original Wasco County Courthouse Preservation Corporation. Several items are on display inside including leg irons, handcuffs, ball and chains, and a pair of "iron boots." It was added to the National Register of Historic Places in 1998. 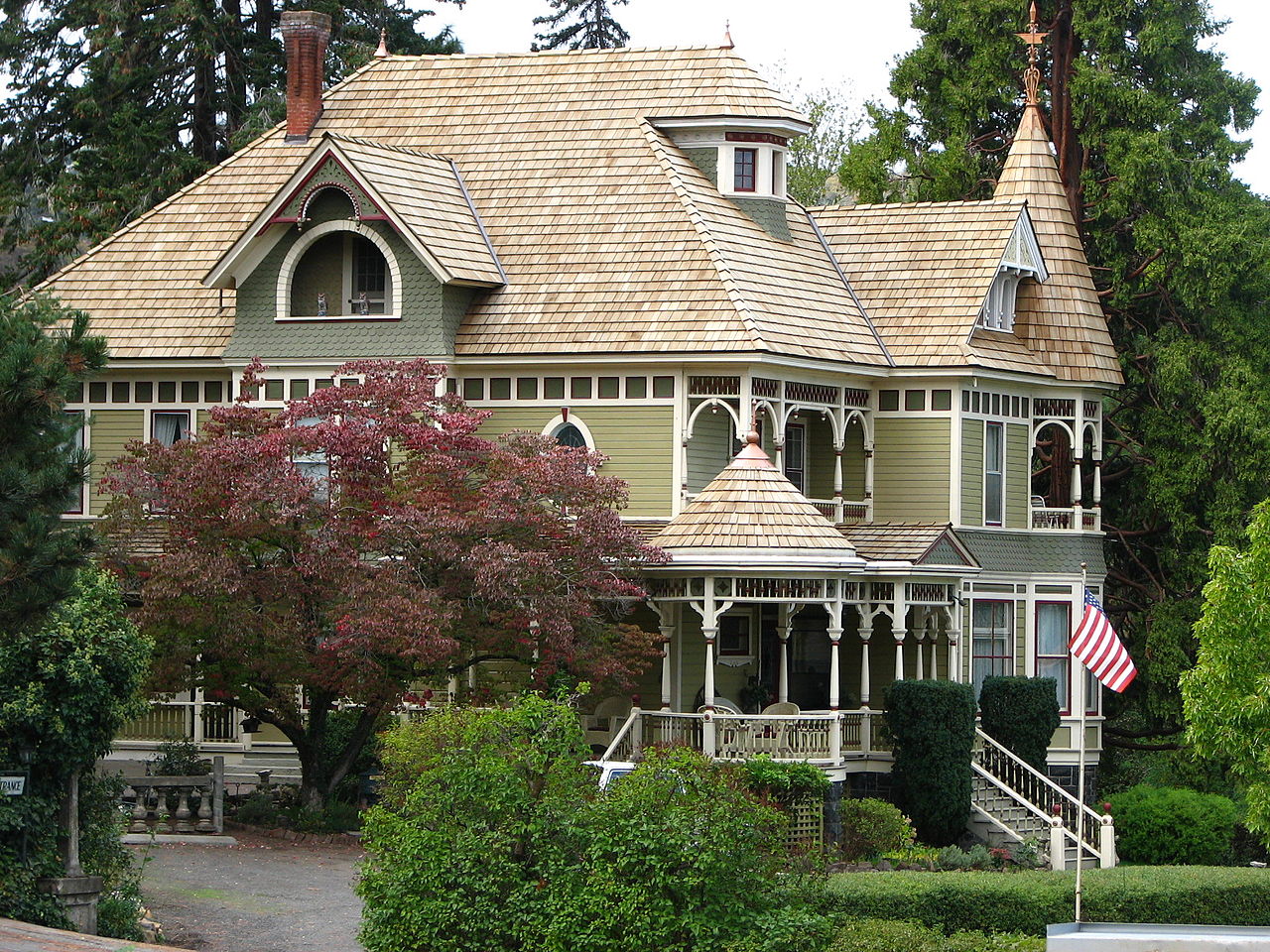 Listed on the National Register of Historic Places, the Bennett–Williams House is the finest example of Queen Anne architecture in The Dalles. It is named after the two families first to occupy the house. Prominent judge Alfred S. Bennet built the house in 1899; he would later serve as an Oregon Supreme Court Justice from 1919-1920. The next owners Edward and Elizabeth Williams bought the house in 1926. Edward was a prosperous local businessman. The house features vertical and horizontal siding, fish scale and patterned shingles, ornate woodwork, gable and hipped roofs, a large first-floor porch with a cone-roofed pavilion, a small second-story porch above the main entrance, and turret on the northeast corner with another second-story porch. The house appears to be a private residence as of 2020 but in recent times it operated as a bed and breakfast inn.

This short walk through the Dalles begins at the city's Civic Auditorium and concludes with the original Wasco County Courthouse and Bennett-Williams House. The tour includes numerous historic buildings as well as a museum and art center located within the former Carnegie Library.