In 1937, Frederick William Dobe engaged Chicago architects to design a theater “befitting a town of Libertyville’s stature.” The Liberty Theatre was the first commercial building in Libertyville with air conditioning, the workplace of a teenage Marlon Brando, and the site of a world movie premiere in 1942. The property is currently for sale by the owner. 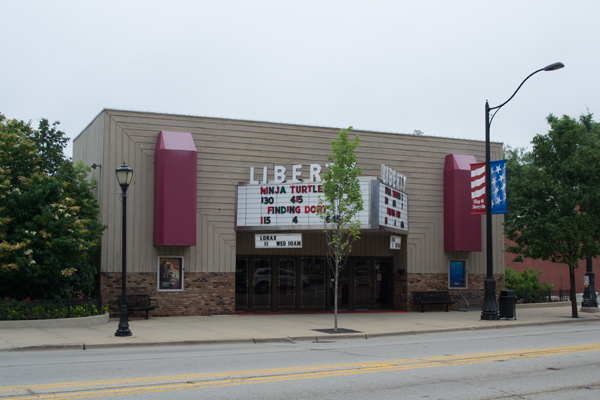 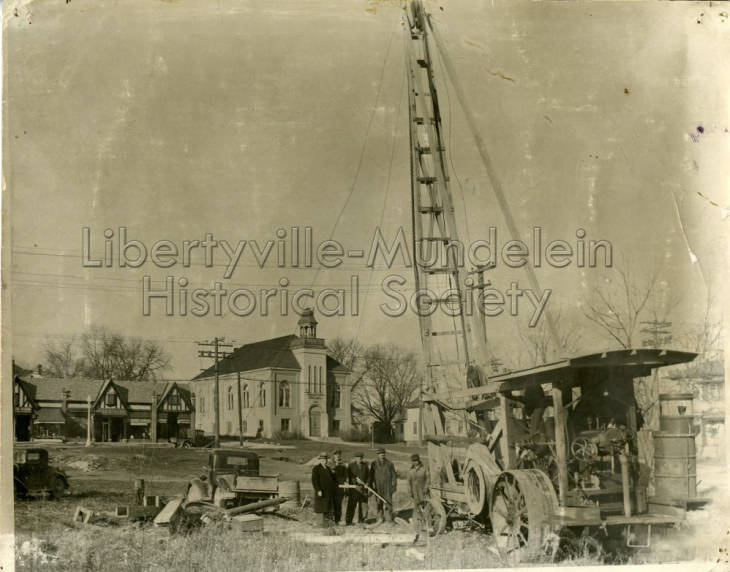 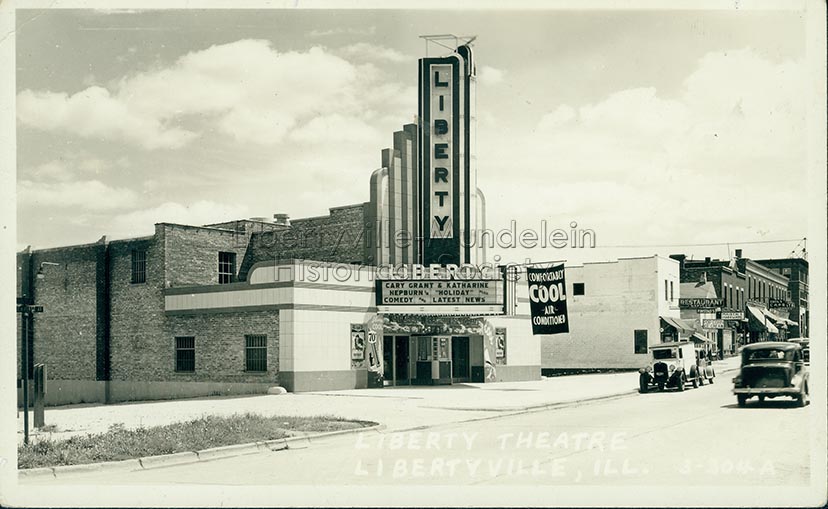 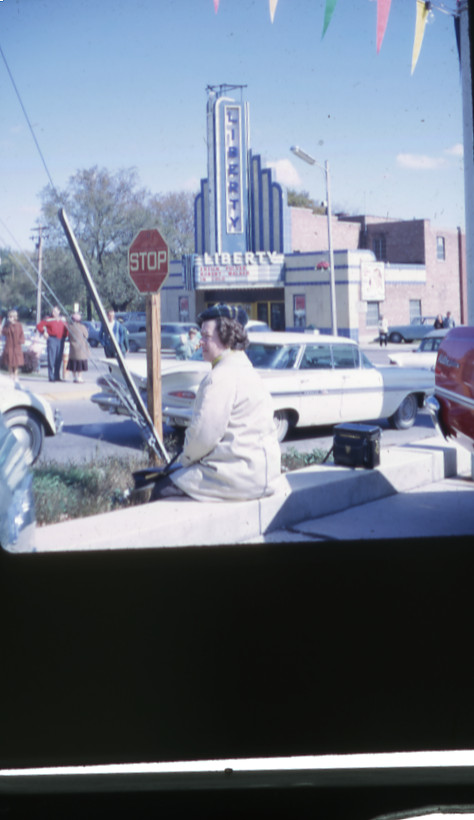 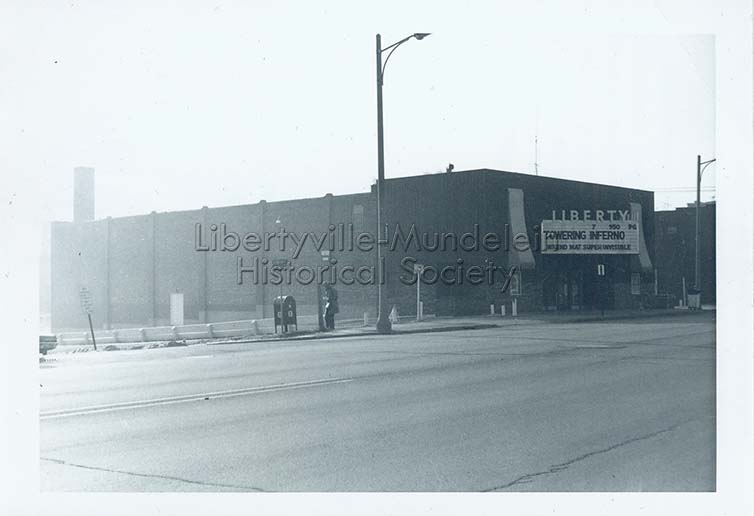 Construction began on April 9, 1937, for a building of more than 700 seats with a cream terracotta exterior and a large vertical sign in Art Deco style. The coming of the building stole the front page headline in the Independent Register the two weeks prior to the opening – “Theatre Opens August 27” (IR 8-19-1937), “Theatre Opens Tomorrow” (IR 8-26-1937). The newspaper published a Souvenir Theatre Section in the August 26, 1937, edition. Local businesses took out full page ads welcoming the new movie house, and an editorial proclaimed “Libertyville this week takes another step forward.” Libertyville merchants offered “theatre opening sales” and competed in a window trimming contest.

The building opened on August 27, 1937, to a capacity crowd at both of the Friday night shows. The key to the theatre was presented to Mayor A.E. Suter, and other local dignitaries spoke before the showing of Slave Ship starring Warner Baxter, Wallace Berry, Elizabeth Allan, and Mickey Rooney. Lobby walls of satinwood veneer and red carpet aisles welcomed the audience. Air conditioning was produced by cool well water being passed over coils, which then cooled air pulled from outdoors by large fans. The manager, Robert Collier, a cashier, a ticket taker, four ushers, and the janitors contributed to the successful launch of the new theater.

Marlon Brando worked at Liberty Theatre some time between 1939 and 1941. In his autobiography, Brando: Songs My Mother Taught Me, Brando told a story about working at the theater. Apparently, he didn’t like the uniforms because they made him hot. He cut up his button down shirt and sewed a pair of cuffs to his jacket to make it look like he was still wearing a second layer. He was fired when one of his coworkers told on him. In revenge, Brando continued, he chopped up rotting broccoli that had been out in the sun for two weeks, mixed it with rotten Limburger cheese and stuffed it into the intake pipe of the air conditioning system, emptying the theater. The person who fired him never figured out who did it.

The Liberty Theatre played a large role in the strong World War II war bond sales in Libertyville. In 1942, Robert Collier, theatre manager and co-chairman of the local war bonds campaign, arranged for actor James Cagney to make an appearance in Libertyville for a bond rally. Cagney arrived to a large crowd in Cook Park on the evening of September 3. During the event, Libertyville residents purchased $110,625 in war bonds (about $1.75 million in 2020 dollars).

Based on this success, Libertyville was selected as a location to host the world premiere of Desperate Journey, a movie starring Errol Flynn, Ronald Reagan, and Raymond Massey. The purchase of a war bond, ranging from $25 to $500, with higher prices for the premiere seats, was the cost of admission for the showing on September 23. While no movie stars were in attendance, the night had Hollywood style. Crowds of people lined Milwaukee Avenue while the high school band played. The guest of honor, Illinois Governor Dwight R. Green, arrived in a horse and carriage loaned for the evening by John F. Cuneo. The event was a success. Libertyville citizens purchased another $40,000 in war bonds (about $636,000 in 2020 dollars).

In the late 1960s, the Liberty Theatre was operated by Rhyan Theaters, which owned several theaters in Lake County, including the Grayslake Drive-In and McHenry Drive-In, which is still in operation. In 1968, Harry Rhyan embarked on a “vast remodeling program” at the Liberty Theatre, which included the removal of the Art Deco marquee. In the 1980s, the single, large auditorium was divided in to two smaller viewing areas.

In 2012, Scott Dehn purchased the theater business and upgraded to modern technology with the purchase of two digital projectors. The building and property were still owned by the Rhyan family, who announced in 2017 that they were putting the building and the property up for sale for potential redevelopment. The theatre remained open until January 2020.

Local individuals and organizations have investigated various plans for purchasing the property and keeping the building as a movie theater or multi-purpose building. Libertyville Mayor Terry Weppler was involved in discussions to save the building and was close to an agreement; however, the COVID-19 crisis brought the process to a halt.