During the middle of the Mexican American War the governor of New Mexico surrenders to U.S. forces without a fight. Although many citizens were indifferent to the exchange some feared that they would not be treated the same under American rule. An attempt to expel the U.S. followed but was quickly crushed by the occupying military. What was left of the revolt continued as a Guerrilla unit until July.

The local Church the insurrectionists used for their last stand.

Charles Bent, Killed during the first night of the revolt 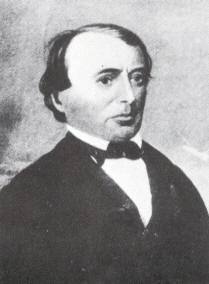 When General Stephen Watts Kearny marched into the territory the would become New Mexico in 1846 he met little resistance from the local Government and quickly established a temporary military government for the occupation. This gave him the power to appoint local leaders to administrate certain areas. Not long after this he left New Mexico to capture more territory in California. Left to their own devices the territorial official place in charge were allowing the soldiers to take advantage of the local population of Mexicans and Pueblos. Some of the crimes committed include stealing food, supplies, sexual harassment and the refusal to recognize land grants issued by the Mexican Government. There were even fears that restrictions would be placed on the Catholic Church. As tensions grew so did the risk of revolt.
On January 19th 1847 a large mob of Mexicans and Pueblos were led by Pablo Montoya and Tomás Romero respectively. The first stop made by this mob was the home of the local Governor Charles Bent. When they arrived they broke in and shot him in the face with three arrows, but he managed to survive for a short time until he was tracked down again and scalped. The revolt the spread to the rest of the town primarily targeting Americans and their homes as well as those who were accused of associating with them. The next day the revolt spread out side of the city northward to local farms and trading posts where more men and women were killed if they were unable to flee.
Having heard reports of the revolt in Taos Sterling Price, the military governor of New Mexico, immediately gather 300 of his men and marched towards the town. On his way to Taos he encountered a force of 1500 insurrectionist and on January 24 the "Battle of Cañada" was fought. With his superior fire power Price quickly routed the enemy who then retreated. Another short engagement took place on January 29th at Embudo Pass. Once again Price quickly routed the insurrectionist and they fled to Taos where they fortified a local church. It was here were the main body of the revolt made their last stand. Price laid siege to the church February 3rd. Over the next two days it was shelled on and off by Price's artillery and his men even tried to light it on fire. When the wall were finally breached on the 5th American troops stormed in and a vicious melee ensued. After the dust had settled only 10 Americans had died compared to the approximately 150 lost by the insurrectionists. The remaining 400 were captured and tried for treason or murdered in their cells.