Blue Jay Manufacturing Company, originally known as the Peerless Overall Company, once occupied a large brick warehouse on the southeast corner of Eighth Avenue and Fifteenth Street in downtown Huntington. The company was established around 1911 by Charles W. Watts, one of early Huntington's most successful businessmen. Watts was president of the Watts, Ritter & Company, director of the First National Bank of Huntington, and vice president of the Empire Furniture Company. Peerless Overall Company, which was renamed Blue Jay around 1918, made overalls, work pants, and shirts, which were then distributed by Watts, Ritter & Co. The company grew during the 1920s, employing over one hundred workers, most of them women. During World War II, Blue Jay made uniforms for the U.S. Army. In 1948, Blue Jay was sold to Blue Ridge Manufacturing, which produced overalls at the warehouse until 1954. After briefly sitting vacant, the former overall factory was used by the Star Furniture Company as a storage warehouse until the 1970s. Today, the historic building houses an indoor self-storage facility. 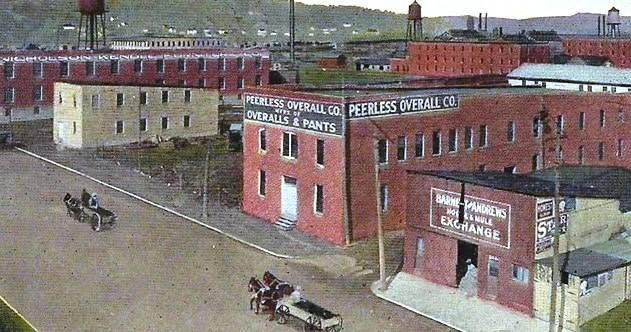 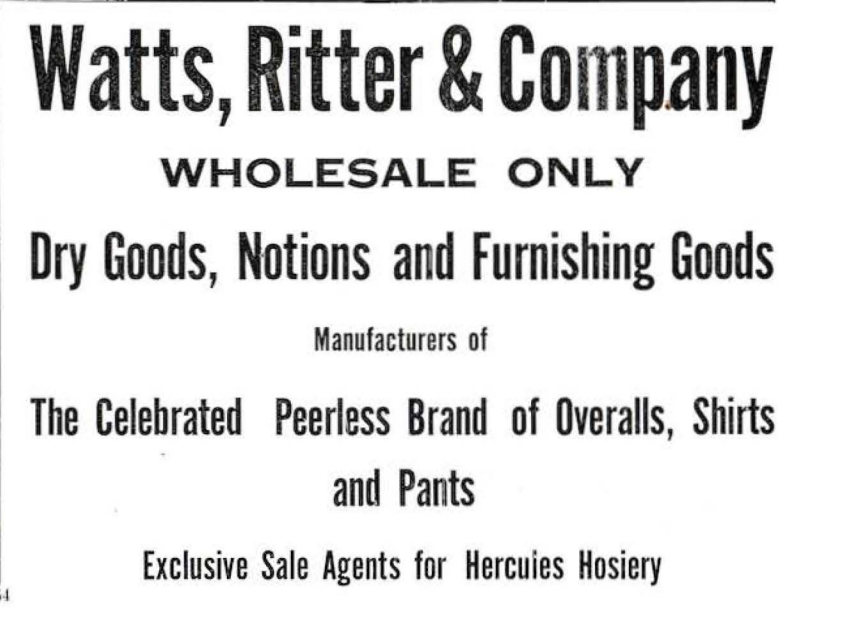 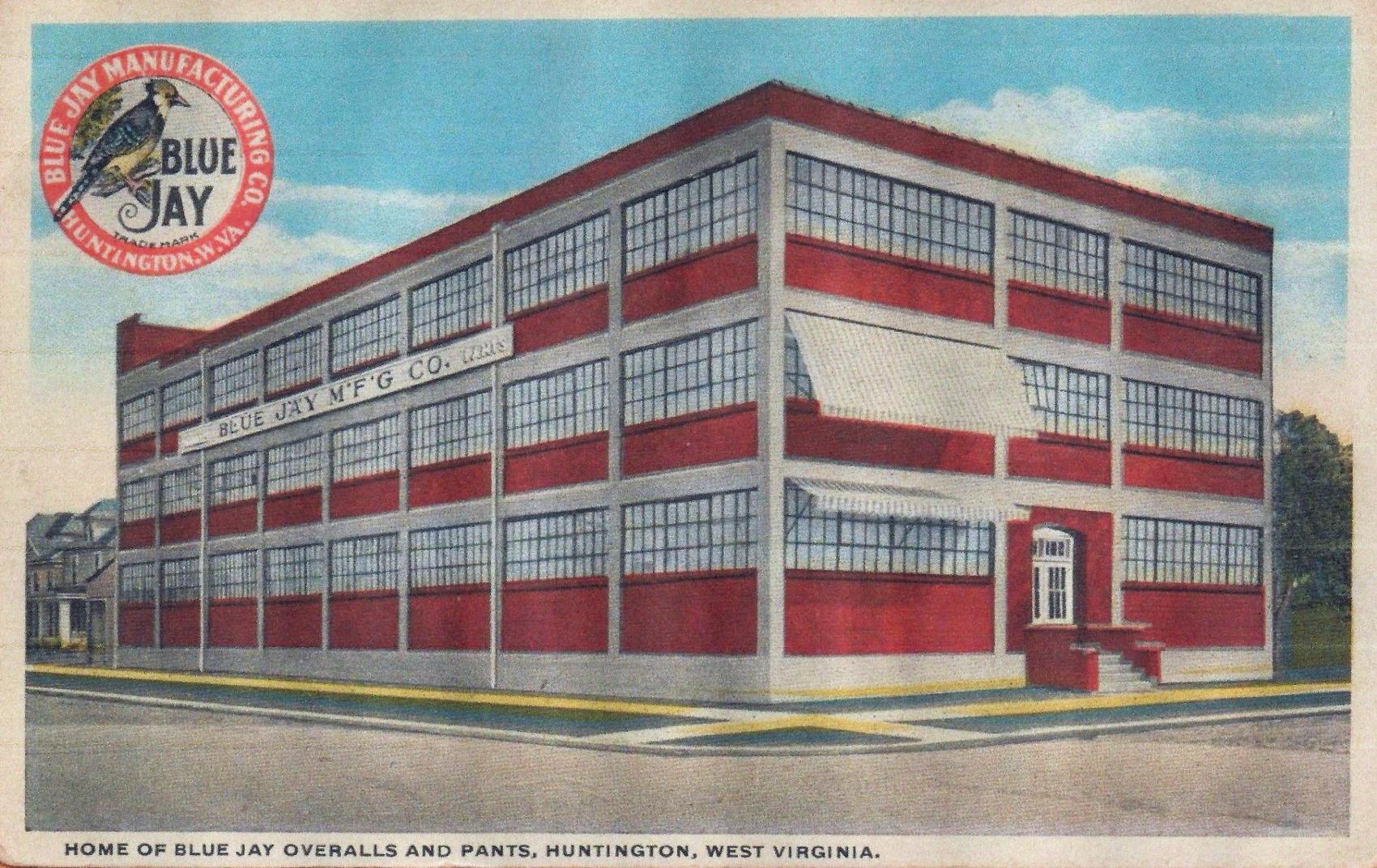 Back side of a Blue Jay Mfg. postcard, featuring an order form for their products 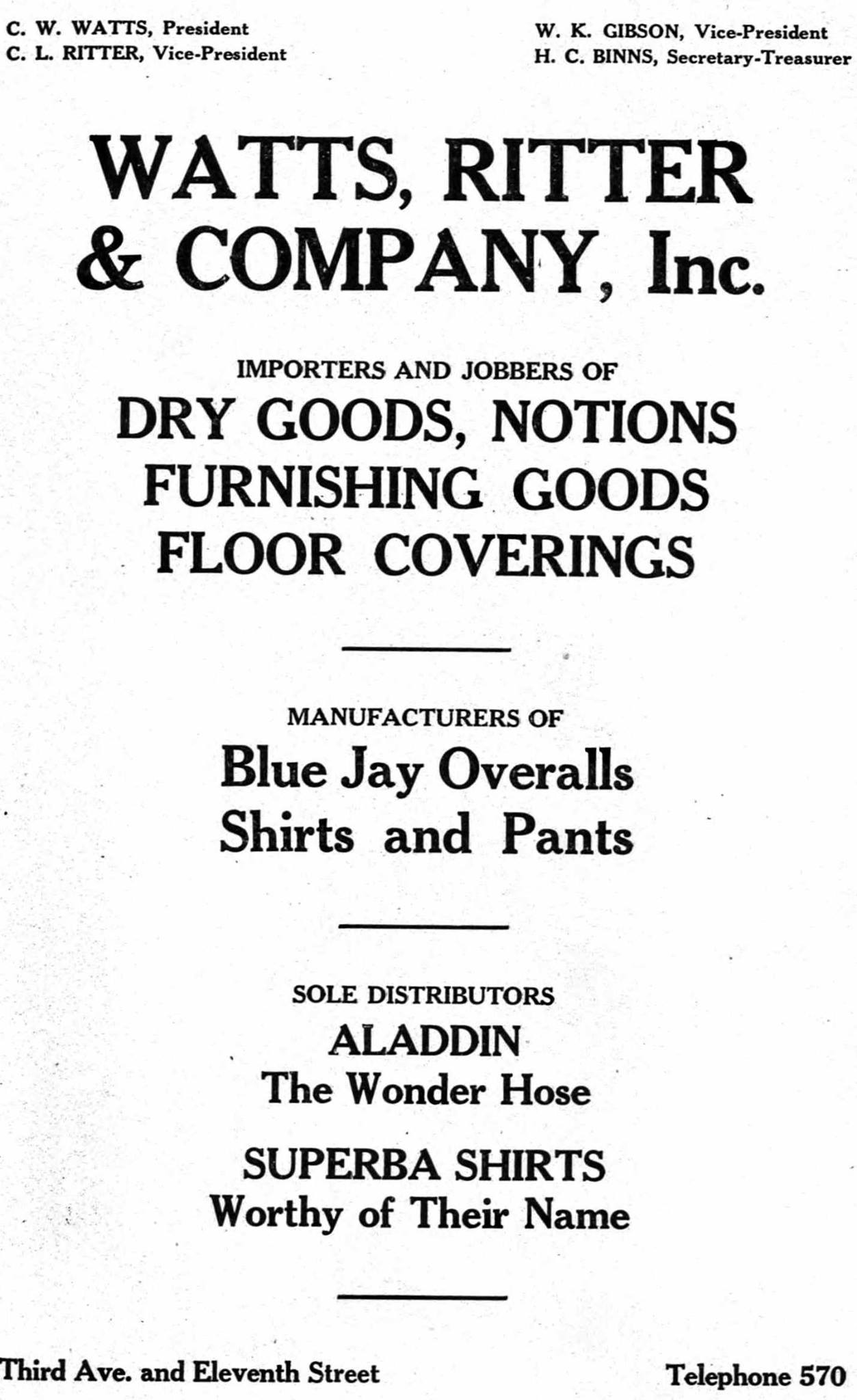 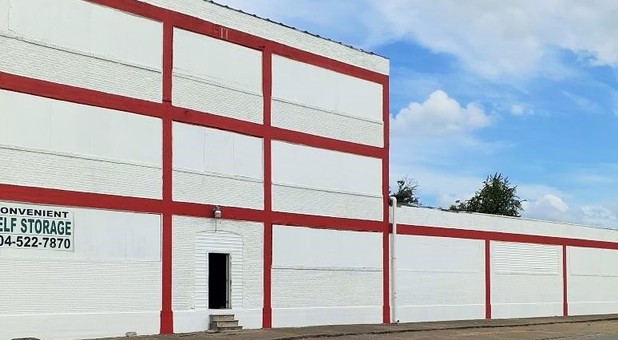 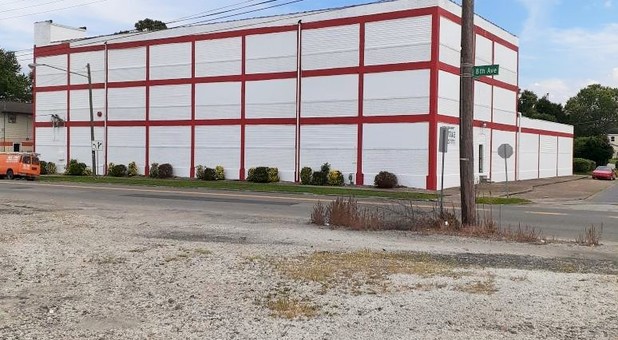 Charles W. Watts was born in Webster, Ohio in 1867. After completing his education in local schools, Watts began work as a bookkeeper in Point Pleasant, West Virginia in 1887 before moving to Huntington the following year. There, he worked as a bookkeeper for the Barlow-Henderson Company, a successful wholesale dry goods company. Watts soon rose through the company’s ranks to become secretary-treasurer and eventually president. In 1898, the company was renamed Biggs, Watts & Company, and in 1906 it became Watts, Ritter & Company. The company grew into one of the area’s largest businesses, with traveling salesmen distributing dry goods throughout West Virginia, Ohio and Kentucky. Along with the dry goods company, Watts was involved with a number of other business organizations in Huntington, serving as director of the First National Bank of Huntington, vice president of the Empire Furniture Company, and director of several other companies.

One of Watts’s other business ventures was a garment factory that produced overalls, work shirts, and pants for distribution by Watts, Ritter & Co. Originally located at 210 Twentieth Street, the Peerless Overall Manufacturing Company briefly appeared in the 1905 city directory with Biggs, Watts & Co. listed as its proprietors. The company next appeared in the 1913 city directory, with Charles Watts listed as president, J.L. Hawkins vice president, J.C. McClintock secretary-treasurer, and H.T. Hudson general manager. The factory manufactured clothing under the “Peerless” and “Blue Jay” brand names. According to a 1915 article about the company, the factory produced 150 dozen standard overalls - available in blue and blue with white stripes - each day, and sold them to twenty different states. By 1917, the company’s name had been changed to the Blue Jay Manufacturing Company. That same year, Blue Jay was moved to a newly built, three-story brick warehouse at 802 Fifteenth Street. The former location was sold to Washington Manufacturing, which also manufactured overalls.

During the 1920s, Blue Jay prospered along with the West Virginia textile industry as a whole. As of 1924, the total value of clothing and cloth made in the state was around twenty million dollars, with nearly fifty factories in operation and over six thousand workers. Blue Jay Manufacturing had 165 workers, the majority of whom were women. At that time, most of West Virginia’s women workers were concentrated in sectors like the apparel and textile industries. By 1928, women constituted thirty percent of the industrial work force in Cabell County, which was well above the state average of 15.5 percent. Many of these women were employed in Huntington’s garment factories like Blue Jay, Washington Manufacturing, and the Huntington Dress Factory.

During the Second World War, Blue Jay made coats and trousers for the U.S. Army, but the company evidently had difficulties transitioning back to overall manufacturing. In March of 1948, the company went out of business and was sold to Blue Ridge Manufacturing. Blue Ridge continued making overalls at the warehouse until 1954, at which point the building was sold to the Star Furniture Company. Founded in 1912, Star Furniture was one of the largest and most successful furniture businesses in West Virginia. While its retail store was located at another site, the company used the former overall factory as a storage warehouse from the late 1950s through the 1970s. Today, the historic warehouse is occupied by Convenient Storage’s downtown indoor self-storage facility.